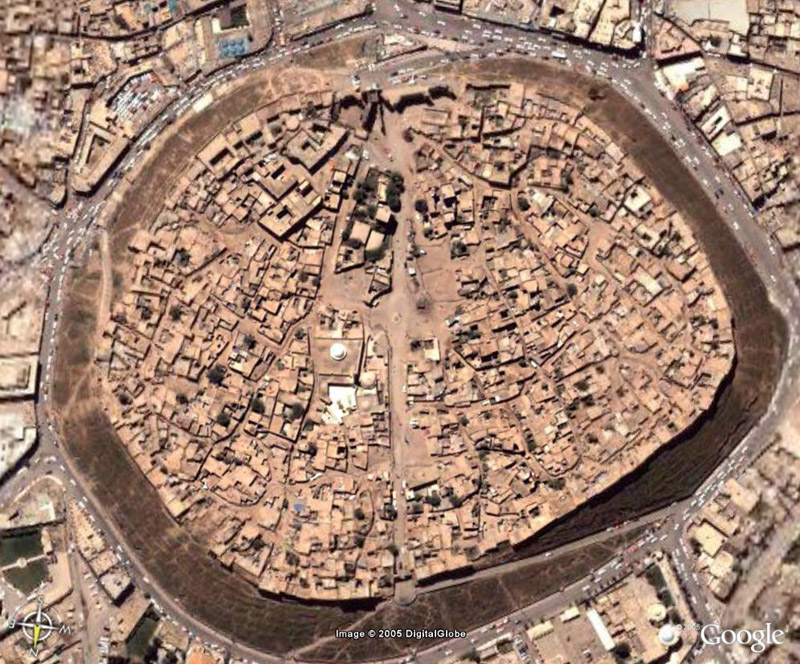 The citadel of Arbela (Irbil) in Iraqi Kurdistan. Often claimed to be the world's oldest continuously inhabited town.

Once part of the Assyrian heartland, Adiabene was annexed by the expanding Persian empire in the 6th century BC. Xenophon's 10,000 passed through on their way to the Black Sea, and Alexander's final confrontation with Darius III was at Gaugamela - probably in the territory of Adiabene east of Mosul. It emerged as an independent kingdom when the Parthians overran the former Seleucid lands. Its main city was Arbela (modern Irbil). Its culture was Persian, its religion Zoroastrian - until a curious episode told by Josephus, concerning the royal family:

King Monobazus fell in love with his sister Helena, and made her pregnant. A dream told him to look after his son, who would have a happy life. Izates became his favourite, although Monobazus had sons by other women. Because they made no secret of their hatred for him, Monobazus sent Izates away, to be brought up by his friend the king of Characene. Izates was well-looked after, and married the king's daughter. Monobazus - old by now - died, and Izates returned to become king.

Coincidentally both mother and son had been attracted to Judaism. When Izates came home, having refused to murder all his brothers (he sent them off as hostages instead - some to emperor Claudius in Rome, others to the Parthians) he decided to ignore public opinion and become a fully-fledged Jew - by getting himself circumcized. Helena went to Jerusalem, where she and her son became major benefactors, and Izates sent five of his sons there to be brought up as Jews.

Izates was a sucessful and well-respected king - and earned even more respect when he took in Ardavan III, king of Parthia, driven out by a conspiracy, and helped him regain his throne. Ardavan gave him Nisibis as a thankyou. But, although the royal family keenly embraced Judaism, the nobles did not. They tried to dethrone Izates, first by an alliance with the Arabs, and when that failed, with the support of Valaksh I (Vologaeses), now king of Parthia (since AD 51). Izates was saved when Valaksh I had to look elsewhere to confront an invasion of the Dahae and Sacae. Soon after this Izates died, leaving the kingdom to his brother Monobazus II, who had also become a Jew. It's doubtful whether Judaism spread much beyond the royal family, however.

When Judaea rebelled against Rome in AD 66, the Adiabene royal family suppported the Judaeans: as a result members of the family were captured by Titus and taken as hostages to Rome.

In AD 116 , Adiabene was annexed by the Roman emperor Trajan, as part of his preparation for a full-scale invasion of Parthia, and became the Roman province of Assyria. But only for a couple of years. Trajan's successsor, Hadrian, released it. It was, along with next-door Atropatene, reluctant to accept the rule of the Sasanians, remaining loyal for some time to its former Parthian overlords. It also became defiantly Christian in later times, retaining its distinctiveness. Despite being overrun in the invasions of emperors Severus (AD 196) and Caracalla (AD 216) it stayed part of the Sasanian empire until the Islamic conquest.

A small but ancient kingdom to the east of the Euphrates. It was nominally a vassal of the Parthians and then the Sasanians - but kept itself distinct: in particular when in the 1st century AD, its royal family converted to Judaism. 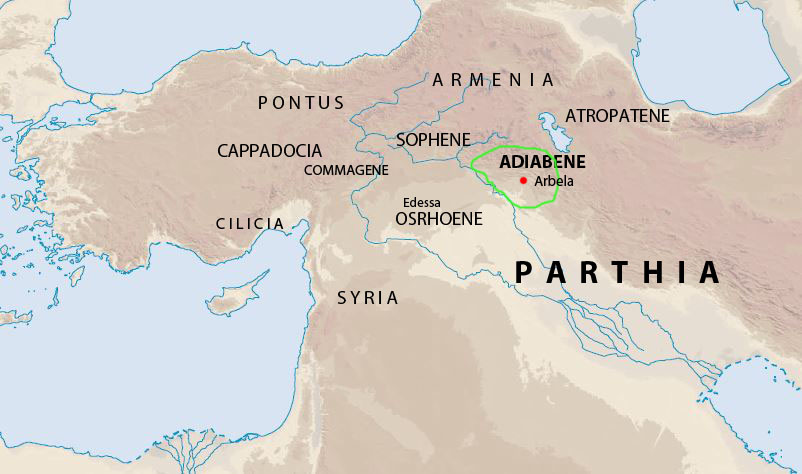 Map showing the location of Adiabene: today it is in Iraqi Kurdistan.

He'd ruled for about 20 years and died aged 55 around AD 58. His mother Helena died around the same time. The Jewish Talmud refers to her generosity and names several gifts she made to the Temple. She also built a palace in Jerusalem which was destroyed by the Romans. She and her son were both buried in Jerusalem.