A strategically placed island in the Persian Gulf; it originally also referred to the nearby eastern part of mainland Arabia. Its control was important to the rulers of ancient Iran and was for centuries fought over by various Arab factions. After 80 years of Portuguese rule in the 16th century, it came back under Iranian control. But from the end of the 18th century it was again competed for by numerous Arab clans and tribes. In 1816 the Sheik put Bahrain under the protection of Britain - an influence which lasted until independence was declared in 1971.

Bahrain was part of the Semitic Dilmun culture (which flourished in Kuwait, Qatar and eastern Arabia) from around 3,000 - 800 BC. It controlled the Persian Gulf trade, and had trading relations with Mesopotamia, and the Indus valley civilisation, but began to decline from about 1000 BC. Exports included timber (the climate was much wetter then), ivory, lapis lazuli, gold, pearls (a Bahraini speciality); imports may have included cotton and chickens! The weights used in Dilmun were the same as those used in the Indus valley. A theory exists that the original Garden of Eden, the Sumerian paradise, referred to the Dilmun civilisation of the Persian Gulf (although it's thought by some to have been along the eastern shore of the Gulf, on the narrow well-watered plain between the sea and the Zagros foothills. It is also the home of the date-palm, long a staple of human diet in the region).

Archaeological evidence of Dilmun on Bahrain include the remains of impressive temples, and over 150,000 grave tumuli.

It fell to the Assyrians (captured by Sennacherib, king 707-681 BC), and then to the Babylonians - until Babylon fell to Cyrus in 538 BC.

It's a reasonable deduction that Bahrain came under Achaemenid rule - although there's very little hard evidence. But Alexander was very interested and planned to colonise the Gulf coast, and sent out Archias to explore. Arrian reports:

He had ideas of settling the seaboard of the Persian Gulf; he fancied it might become as prosperous as Phoenicia ... the wealth of the country was an additional incitement - the cassia, trees which bore frankincense and myrrh, shrubs which yielded cinnamon ... two islands lay off it ... the second, called Tylus [Bahrain] ... was of some size, most of it neither wild nor wooded, but fit to produce all sorts of cultivated crops.

Alexander's admiral Nearchus later landed on it - there's mention of a flourishing trade based there, pearls, and "cotton trees". In any case Bahrain became Hellenised, with Greek spoken alongside Aramaic. The Parthians brought the Gulf under their control, as far south as Oman - they in turn surrendered control to the Sasanian Ardashir I,

During the Sasanian period, Bahrain became something of a sanctuary for Nestorian Christians - being outside the jurisdiction of the Byzantines - there were aslo Zoroastrian and Jewish communities.

Bahrain's ruler, according to tradition, converted to Islam in AD 628, as a result of early missionary activity. Arabs, though, began to feel themselves increasingly marginalised during the period of Abbasid rule.

In 863 an opponent of the Abbasids, Ali ibn Muhammad, made his way from Samarra to Bahrain, where he pretended to be Shi'i and started to stir up a rebellion against the caliphate. He soon won support, and acquired power. But his rebellion failed in the end to win over the local population. 'Ali abandoned Bahrain and relocated to the city of Basra in southern Iraq in 868, where he was responsible for instigating the much more serious revolt of the Zanj.

In the 10th century, the Abbasids themselves began to lose authority, faced with the Zanj rebellion - and the Qarmati, a branch of the Ismaili sect, which had broken away from the Fatimids seized Bahrain in AD 899 (the island and neighbouring eastern Arabia), where they set up their utopian republic. They soon began a Daesh-like reign of terror: they attacked pilgrims on the hajj: in 906 they slaughtered 20,000; they attacked Baghdad in 927, and sacked Mecca and Medina in 930 - capturing the Black Stone, and forcing the Abbasids to pay mightily for its return. They controlled the Gulf, and demanded tribute from both Abbasids and Fatimids. Their state was wealthy, with an economy based on huge estates producing grain and fruit, worked by thousands of Ethiopian slaves. They themselves lived tax-free, and loans were without interest.

In 976, the Abbasids defeated them, and their power began to decline. Bahrain reverted to orthodox Islam under Abu al-Bahul al-Awwam in 1058; the Arab Uyunid dynasty, helped by the Seljuqs eliminated the remainder of the them in 1067. Qarmatism as a movement in the rest of the Islamic world disappeared at around the same time. 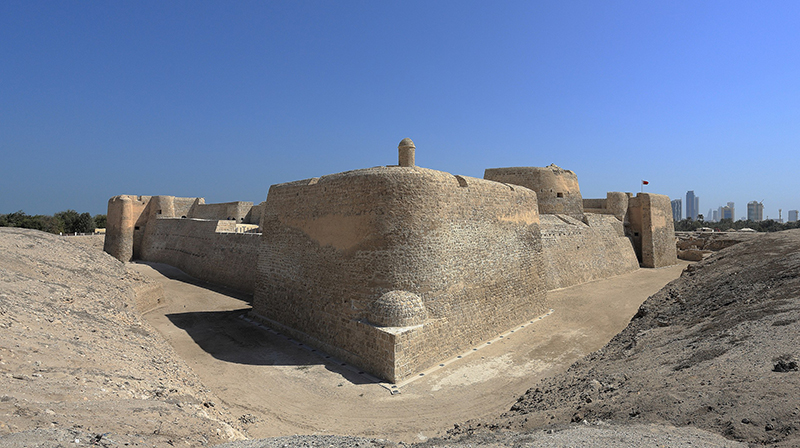 Qal'at al-Bahrain. Also know as the "Portuguese Fort", although there's been a fort on the site from the time of the Dilmun civilisation c 3000 BC.

The Uyunids ruled Bahrain for 180 years, and were succeeded by other Arab dynasties, of various affiliations. In 1515, the Portuguese occupied the Arab Kingdom of Hormuz, which had nominal supremacy in the Gulf (including over Bahrain) and was then a wealthy trading entrepot - the Beirut (or Dubai) of its day. The Portuguese, with their Hormuz vassals, seized Bahrain in 1525, thwarting Safavid ambitions for the time being. But in 1602, The Safavid shah Abbas I drove the Portuguese from the Gulf. The Iranians ruled Bahrain for 200 years - apart from two brief invasions by Oman. Safavid rule consolidated the Bahraini attachment to Shi'ism. Mostly their rule was indirect, and delegated to Arab clans. Direct rule resumed under the Zand regime - but Bahrain came under Arab rule in 1783. Several Arab families moved in from elsewhere in the Gulf - including the Al-Khalifa.

Under threat (and suffering actual invasions) from Oman and the Wahhabis of Al-Saud, Bahrain signed a treaty with Britain in1820, in which the Al-Khalifa were recognised as rulers. This was originally of dubious benefit, but after 1868 Bahrain acquired protectorate status.

The association with Britain became unpopular - there were revolts which were repressed with British help. In 1911 came a serious protest, which resulted in the British virtually imposing direct rule: their "advisor" to the sheik, Charles Belgrave, remained in office until 1957, during which Bahrain was the base for Britain in the Gulf.

Belgrave saw off a claim by Reza Shah to Iranian ownership - a claim which tried to exploit the Shi'a majority against the Sunni ruling family: a situation which is still ongoing.

British interest was consolidated after oil was discovered in 1931 - though deposits were small compared with elsewhere in Arabia and the Gulf, there was enough revenue to accelerate modernisation - producing an educated middle class wanting political recognition (none was allowed by Al-Khalifa), and an end to British interference (encouraged by the success of Nasser in Egypt in 1956).

The Al-Khalifa, supported by Britain, were able to clamp down on any nationalist ideas: until 1968, when the Labour government in UK announced the withdrawal of all troops from the Gulf by 1971. Once again there were claims from Iran - on historical grounds, which were dismissed by the UN, after a referendum of Bahraini citizens. Bahrain opted nervously for independence.

An island in the Gulf which was a very important link in trade and cultural exchange between India and Mesopotamia; perhaps comparable with the modern Gulf states, like Dubai and Abu Dhabi, who have restored these ancient links. His antecedents are unknown (though he claimed to be an Alid and a Shi'i). It's unknown why he had such a grievance against the Caliphate. He also calimed to be a Zaidi, and adopted egalitarian Kharijite slogans when leading the Zanj revolt - a Black non-Arab could be caliph!

The Ismailis believed that Ismail, son of Ja'far, the sixth Imam was the seventh Imam, the true successor to his father. They believed he wasn't really dead - and would return (the Mahdi): precursors of the Fatimids. At first they were a successful movement, appealing to Shi'i all over the Islamic world. In 899 there was a split: the Qarmatis believed he was dead: and their leader was descended from him, and the actual Mahdi. See also

This family, which the current king and most of his administration belong to, originated in Nejd in central Arabia. The Ottomans - upset by their brigandage and piracy - expelled them to Kuwait, where they remained until their move to Bahrain.

Harold Wilson's administration faced serious economic problems which had led to the devaluation of the pound in 1967. Closing military bases in the Gulf was an obvious way of saving money.