Cilicia - at the south-eastern corner of Anatolia - consisted of a coastal plain and a mountainous interior, linked to Cappadocia by the "Cilician Gates" a steep and narrow pass which travellers still have to negotiate. Early domination by Hittites, Hurrians and Assyrians was replaced by Persian rule after the conquests of Cyrus.

It was a satrapy, but ruled by local dynasts (with the title Syennesis) rather than directly by the Achaemenids from Tarsus, its capital on the coast. The "Ten Thousand" with Cyrus the Younger marched through the Cilician Gates and down towards Tarsus on their way to confront Artaxerxes II. They put the wind up the Syennesis, who sent one son to warn Artaxerxes, while the other joined Cyrus. 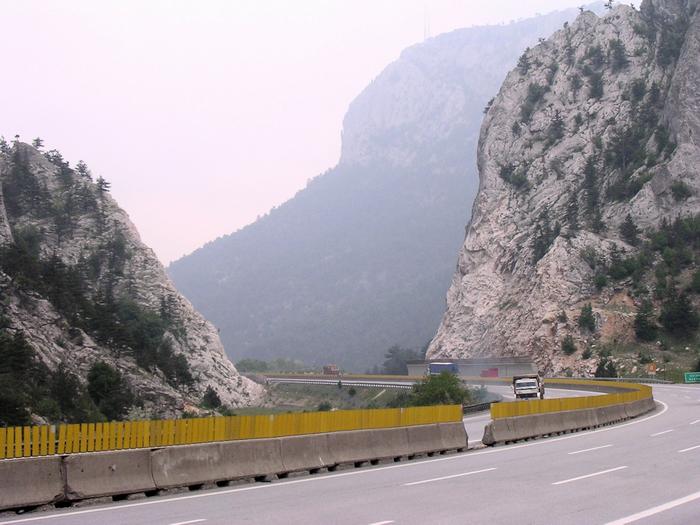 Alexander found his reputation was enough to terrify Cilicia into submission. Arrian's account:

When he got to where Cyrus' camp had been, he found the Gates strongly defended ... he marched towards the pass under the cover of darkness, intending a surprise attack. In fact they saw him coming, but Alexander was successful anyway, as when they discovered he was attacking them in person, the guards abandoned their position and ran away.

And it was in Cilicia that Darius III tried unsuccessfully to halt Alexander's advance, at the Battle of Issus (November 333 BC).

The Persians never recovered Cilicia: it was one of the territories coveted by Ptolemy, presumably to protect his acquisition of Cyprus, but it eventually became a somewhat neglected corner of the Seleucid empire. The coast became a stronghold for pirates, who were sufficiently well-organised to arrange kidnappings and disrupt trade and communications in the entire eastern Mediterranean for decades. It became part of the expanded "Greater Armenia" of Tigranes in 83 BC. But his empire was not to last. The Roman general Pompey, given unprecedented personal power by the Romans, was able to destroy the pirates in 67 BC. Tigranes and his ally Mithradates of Pontus were eventually crushed by the Romans, and the whole of Cilicia became a Roman province (part of it already was after earlier moves against the pirate menace). Cyprus was annexed from Ptolemaic Egypt and became part of the province - in time to receive its most celebrated governor, the Roman man-of-letters Marcus Cicero. He spent much of his time there trying to fob off a young friend who was pestering him to send him some panthers to make a splash in the Games he was organising in Rome.

Cilicia remained part of the Roman empire - and then of the Byzantine - until the Arab conquest. It was settled by Armenian refugees, entering a vacuum caused by the defeat of Byzantium by the Seljuq Turks in 1071 at the Battle of Manzikert, and became an independent Christian kingdom looking for support from Europe, and allying with Mongol Il-Khans against the Egypt-based Mamluks, who eventually conquered them. The elite became refugees once again, after Timur's invasion - but an Armenian population survived until the massacre of 1909, and their final diaspora.

On the south-east coat of modern Turkey. Conquered by the Acahemenids, neglected by the Seleucids, it fell first to Armenia under Tigranes and then to the Romans. 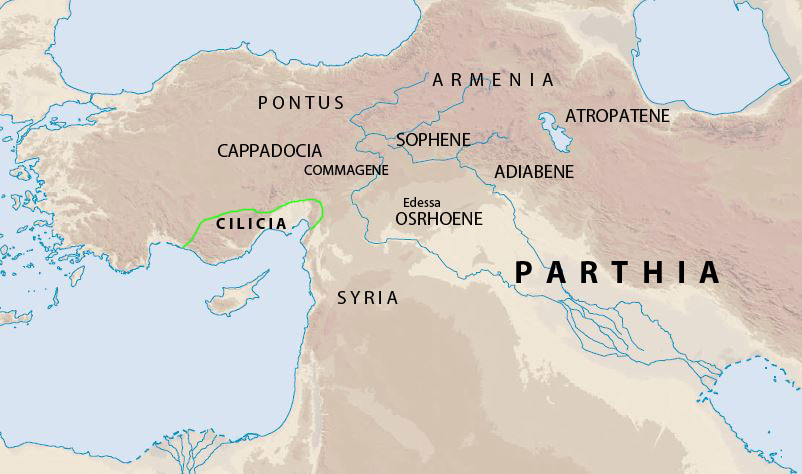 Map showing the location of Cilicia

Ironically, Cilicia became Armenia much later in its history, when the Armenians, under pressure from the invading Seljuk Turks, moved their power base to Cilicia AD 1080. Cilicia had already been a haven for Byzantine refugees from the Islamic conquests.