Elymais strictly speaking was not a neighbour - from the time of Cyrus or even earlier it had been an integral part of the Iranian heartlands - the capital city of Susa was in this region. The earlier history of Elam and the Elamites can be found here. Along with Media Atropatene, it broke away from the disintegrating Seleucid empire, around 190 BC. But independence was short-lived: the Parthian king Mehrdad I annexed it (along with most of the former Seleucid territory east of the Euphrates) around 150 BC. When, in 139 BC Elymais supported the Seleucid king Demetrius II who'd set out to recover the eastern provinces from the Parthians, it was punished; the land was pillaged and temples destroyed. Nevertheless, Elymais persisted in taking its chances. It supported Antiochus VII and finally achieved independence from Ardvan III (AD 12 - 38). Its independent existence was terminated by the Sasanians, in AD 224.

The famous "Frank Zappa" figure [right] and several other striking pieces of sculpture were found in the ruins of the Shami temple at Malamir in Elymais. The temple was completely wrecked and burned. Also found was a bronze head [below], broken in half and bashed in with a hammer. It's been suggested that this Hellenistic work could be a portrait of Antiochus IV - if so, this temple could have been one of the two referred to as destroyed in the "revenge" of Demetrius II. In any case the numerous fragments of bronze and marble statuary found in the temple suggest this was a place of great wealth. Our information about the rulers of Elymais comes - as does much of our knowledge of the Parthians, Greco-Bactrians and others of this era - from coins. 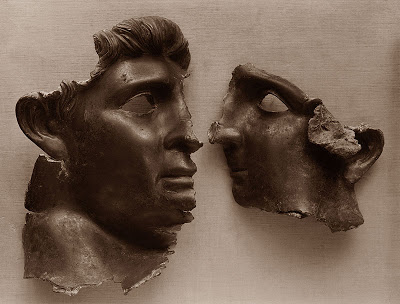 Modern Khuzistan or Ilam broke away (after several attempts) from the Seleucids and the Parthians, establishing a wealthy independent kingdom close to the Persian heartland.

Had been taken over by 147 BC by Kamniskires, king of Elymais, and was never retaken by the Seleucids.