JUDAEA (until the Roman takeover)

For Judaea, there is more written source material than for most of Iran's border lands. Most important is the Jewish history preserved in the collection of texts in the holy book of the Jewish religion known to Christians as the Old Testament.

For later history, we depend on Josephus (born AD 37/8)- although a Jew, he owed his cushy life in Rome to the emperor Trajan, who was not exactly a friend to his people. His predominant attitude was that the Jews were stupid to take on the Romans, whom their god clearly currently favoured, when a much better life could be had by co-operating with them. Two important works of his, in Greek, survive: the Jewish War which deals with the confrontations with Rome of which he was an eye-witness, and Jewish Antiquities, a history of the Jews from the creation to his own time.

The Parthians were the main power in the Middle East at this time. They had exploited the weakness of the Greek Seleucids to re-establish an empire based in Persia. Whether or not they truly threatened Roman interests, the Romans thought they did : and were very anxious to keep a “buffer” between the Parthians and themselves.

Pompey: The recent Jewish expansion under the Maccabees had brought them to the notice of the Parthians. In 63 BC, the Roman generaL Pompey, already calling himself “the Great”, arrived in the area. Roman interest had begun. Pompey scared the Parthians into making peace, and then turned his attention to the trouble in Judaea. Two Maccabee brothers each wanted to be king : but when Pompey decided to support one, the other unwisely tried to attack him, and then took refuge in Jerusalem. Pompey decided to lay siege to Jerusalem : no easy matter. The Jewish historian Josephus describes what happened:

As he approached, Pompey tried to work out how he could attack the city, seeing the impregnable solidity of the walls and the fearsome ravine in front of them.

The Roman effort would have gone on for ever, if Pompey had not exploited the seventh day, on which the Jews, because of their religion, do no manual work. He got his troops to increase the height of his earthworks: the Jews are not allowed to fight on the Sabbath except in self-defence : so that as long as his men did not attack, they had a free hand with the siege-works. Even so, his ballistae were ineffective against the massive and beautiful towers of the city.

While the Romans were putting up with all these severe hardships, Pompey was amazed at the Jews, especially because they did not let up on their religious observances, despite coming under constant fire from Roman missiles. The daily routines of worship in honour of the god continued just as in peacetime. The siege had lasted three months when the Romans finally dislodged one of the towers, and burst into the temple.

Many of the priests, seeing the enemy advancing, swords at the ready. remained unperturbed at their devotions, and were massacred as they poured libations and burned incense, putting their safety in second place to the worship of the god.

But most of the dead were killed by rival groups of their own race, while an unknown number threw themselves over the precipices; some, driven insane in their hopelessness, set fire to buildings around the walls, and were burned to death. Of the Jews, twelve thousand died, while on the Roman side there were more wounded than actually killed.

But the horror that most affected the Jews was the exposure to foreigners of the holy place, which only the high priest was allowed to enter. Pompey and his officers went inside and saw the holy objects , all made of gold: the candelabrum, lamps, table, the sacrificial vessels, the store of spices, and the sacred money : 2,000 talents of it. However Pompey did not touch these things, nor anything else in the temple. In fact the very next day he gave orders to the attendants to clean the place, and resume the sacrifices as normal.

The continuing threat from the Parthians soon caused the Romans to appoint as king of Judaea the strong and capable Herod (although, or more likely because, he was an Idumaean, a people forced to convert by the Maccabees). Herod's support for the Romans , especially the future emperor Augustus in his campaign against Antony and Cleopatra in 31 BC brought rich rewards. He also caused misery to his own people through severe taxation. Josephus explains:

The excuse he used to the Jews was that the Romans were forcing him to carry out these projects. At the same time he told the Romans that they were in their honour. Really however he was only interested in himself, and his ambition was to leave behind monuments to his reign.

His building projects included rebuilding the temple (18,000 were employed in this project), the port of Caesarea, and, for himself several amazing fortress-palaces, including Masada and Herodium, which was to be his tomb. His increasing paranoia (he executed his wife, and three of his sons , including his heir) and the chaos it caused led to direct Roman intervention after his death. 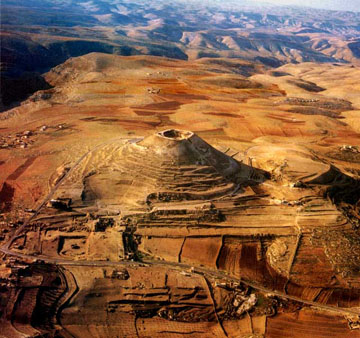 The "Herodium" - the palace is inside the hill.

Continue with the story of Judaea under Roman rule...

This small territory in the Levant has been probably fought over more than anywhere else on earth. The earliest peoples were known as Canaanites, and had established a successful civilisation (see Phoenicia).

Later two small kingdoms developed: Israel which was destroyed by the Assyrians, and Judaea destroyed by the Babylonians. When the area came under Persian rule, some of the exiled Judaeans were allowed to return. Persian rule was superseded by Macedonian (Seleucid) after Alexander's conquest. Seleucid misgovernment allowed an independent kingdom to emerge - the Hasmonaeans (or Maccabees), who were overthrown in turn by the Romans. Eventually it became a Roman province called Judaea, until, after a series of failed insurgencies, it was renamed Palestine. 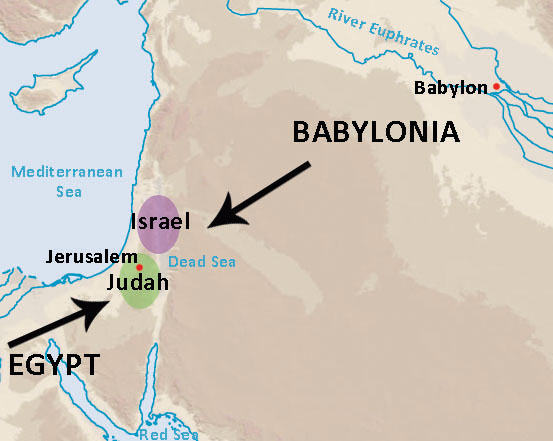 The kingdoms of Israel and Judah before both were destroyed in the 6th century BC.

This significance of this passage had been fiercely disputed - especially as we don't know if it was written before or after Cyrus' conquest of Babylon.

Also highly controversial. When was the temple restored? Did the Persians really pay for it? Is there any evidence elsewhere for their tolerance of other religions?

Economic progress under the Seleucids had led to the priests (the dominant urban class) becoming wealthy and hellenised - while rural communities remained poor and "backward". Antiochus IV wanted to capture Ptolemaic Egypt, which his famous father Antiochus III had failed to do. He took money from various priestly factions in Jerusalem, in return for political advancement. The unpopular rich priest Menelaus was the final beneficiary - supported in his reign of terror by Antiochus. When Menelaus set up a statue of Zeus in the Temple, the revolt was led by Judas' family. It began as a revolt against Menelaus and the wealthy hellenised Jews, rather than as an independence movement. Judas defeated all the armies sent against him, by Jews and later by the Seleucids - but was saved from a counter-attack from Antiochus by Mithridates I- diverting the Seleucids to defend their eastern territories against the Parthians. Judas duly captured Jerusalem - in honour of which the Hannukah holiday was established. The Seleucids eventually did strike back , sending a 20,000 strong army. The Jews were crushed and Judas was killed. But with the Seleucid rule soon disintegrating under pressure from the Romans, the Hasmonaean family were back ruling an independent Judaea (from 140 BC to 37 BC).

Most of our information about the history of Judaea in this period comes from Jewish writer Josephus (37 - 100 AD), who was an eyewitness to the main events. He was a priest, and an aristocrat. He was sympathetic to the Romans at first, but joined the insurgency in 66 AD as a commander. After the defeat of his army, he surrendered, in slightly suspicious circumstances, to Vespasian, and became a trusted supporter. He was given Roman citizenship, and moved to Rome, where he wrote his books on the Jewish war and the history of the Jewish people in both Aramaic and Greek. His aim was to show that Jewish civilisation was as important as that of the Greeks and Romans : and at the same time to show that the Jews were foolish to challenge Rome.