Medes was a name for groups of Iranian-speakers who began moving into the northern Zagros area on the west of the Iranian plateau from the end of the 2nd millennium BC. They are first heard of as being under the control of the Assyrians of Mesopotamia in around 737 BC. An inscription of Tiglath-Pileser III (745-727 BC):

I ordered my armies to march against the Medes. As for those rulers who were not submissive, I conquered their cities, defeated them and took their spoil (he goes on to list towns from each of whom he took 100 horses)

Sennacherib (705-681 BC) says in an inscription from Nineveh

I received the heavy tribute of the distant Medes, whose name no one among the kings, my fathers, had heard; to the yoke of my rule I made them submit.

But in 615 - 612 BC in alliance with the Babylonians (The Fall of Nineveh chronicle):

The Medes … against Nineveh ? did battle ? destroyed ? inflicted a terrible defeat upon a great people, plundered ? carried off the vast booty of the city and the temple and turned the city into a ruin.

The Akkadian (Babylonian) word often used for the Medes (Umman-manda) suggests semi-human savages! The above excerpts are from contemporary chronicles. But the Greek references to the Medes, especially Ctesias and Xenophon suggest a life of sophisticated luxury and refinement. 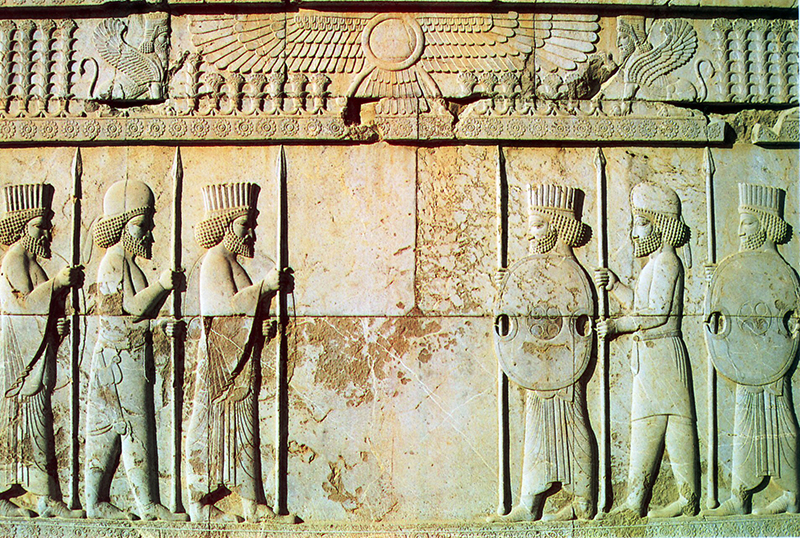 From the time of their conquest by Cyrus the Great, the Medes were progressively integrated with their Persian cousins: both nations appear side by side in the Persepolis reliefs: the Medes are distinguished by their bowl-shaped headgear

Herodotus tells of a dynasty of four kings under whom a great Median empire rose and fell (to Cyrus). Much of his account of the Medes is reminiscent of the Achaemenids - which has made his narrative suspect.

Deioces Used his reputation as a fair arbiter in local disputes to get chosen as ruler of the Medes. Under him they became a united people, but he became a reclusive and paranoid tyrant: he built a palace for himself at Ecbatana, with seven concentric walls - each a different colour, with the inner two of silver and gold. None of his subjects were allowed inside.

Phraortes, his son, attacked the Persians, and then the Assyrians and was killed in battle.

Cyaxares, son of Phraortes, attacked the Lydians in western Anatolia - a datable event, as it coincided with a solar eclipse on May 28th 585 BC. The Medes would have been filling the vacuum left after the demise of the Babylonians, and further west, Urartu. Lydians and Medes made an alliance thereafter, sealed by a marriage between Alyattes' daughter and Cyaxares' son, Astyages. His kingdom was invaded by Scythians and ruled by them for 28 years until they were driven out with Egyptian help. He then defeated the Assyrians and captured Nineveh.

Astyages, son of Cyaxares. Herodotus tells Astyages' story as part of his biography of Cyrus. After a dream where his daughter Mandane flooded Asia with her urine, he married her off to a supposedly powerless Persian, Cambyses. After a second prophetic dream, he ordered her son, the future empire-builder, be brought home to be killed. Harpagus gave Cyrus to a shepherd to dispose of - but his wife had just lost her baby, and kept the little prince, giving the corpse of her dead son to Harpagus. As Cyrus grew to manhood, the royal bearing of the shepherd child and a game in which Cyrus was chosen as king by his playmates, attracted the attention of Astyages, and the shepherd confessed. Harpagus was given a brutal punishment, being tricked into eating his own son at a banquet. But when Magi told Harpagus Cyrus was no threat as he'd already been "king" in the childhood game, he was sent back to Persia. In 559 BC, Cyrus became king - and Harpagus, keen for revenge, encouraged him to rebel against Astyages.

See here for what happened when Cyrus took on the Medes.

Ctesias says after the destruction of the Assyrian empire, the Medes ruled over Asia, Arbaces being the king who defeated Sardanapalus [Ashurbanipal 669 - c 630 BC]. 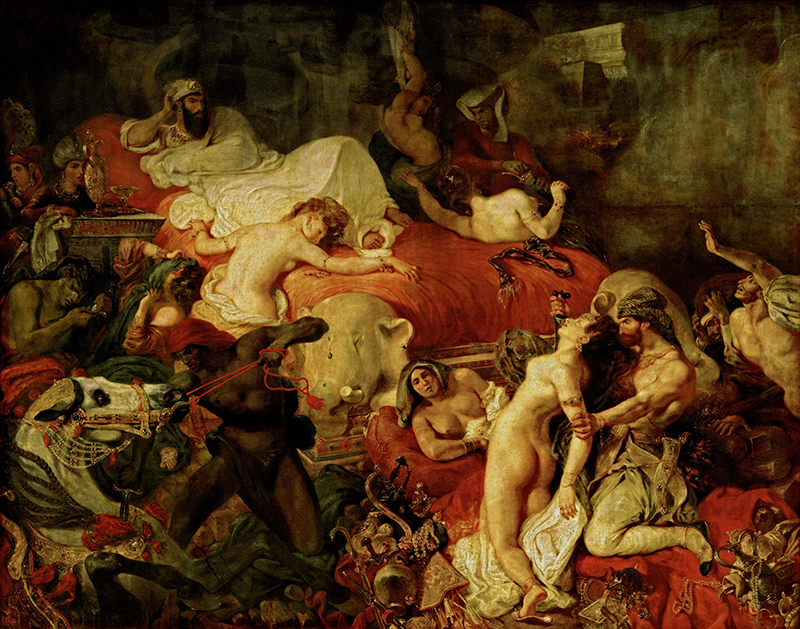 The death of Sardanapalus, by Delacroix 1827. Louvre

He claims that they ruled for 280 years over Central Asia and Egypt (but not India). His names for the kings are different from Herodotus', though both agree on Astyages as the last of them. The extent and nature of their "rule over Asia" is much disputed. Presumably, though, the Medes did expand westwards, as far as the frontier with Lydia, and were responsible for the fall of Urartu. Their confrontation with the Lydian empire of Anatolia was halted at the river Halys by an eclipse - which can be dated precisely to 585 BC.

From the time of their conquest by Cyrus the Great, the Medes were progressively integrated with their Persian cousins: both nations appear side by side in the Persepolis reliefs (picture above).

According to Berossus, the "Hanging Gardens of Babylon" were built by Nebuchadnezzar for his Median wife, who missed her native mountains!

Their capital is named in Darius' Bisitun inscription as Hamgmatana - becoming Ecbatana in Greek and eventually modern Hamadan. No trace of the Medes has been found there to date. And there's very little definite Median material elsewhere, though several hill-top settlements, with forts or palace-like structures are associated with the Medes - principally Godin Tepe and Nush-i Jan.

The two temples indicate that this was a religious site. The Central Temple (8th century BC) contains an altar on which a fire was lit. It's speculated that this may be early evidence for Iranian fire-worship, later to be a major feature of Zoroastrianism. It was carefully filled up with stones around 600 BC. Nush-i Jan is a rocky outcrop on a flat plain not far from Hamadan. Later mud-brick buildings included a columned hall (as later found in Achaemenid places) and a fort. 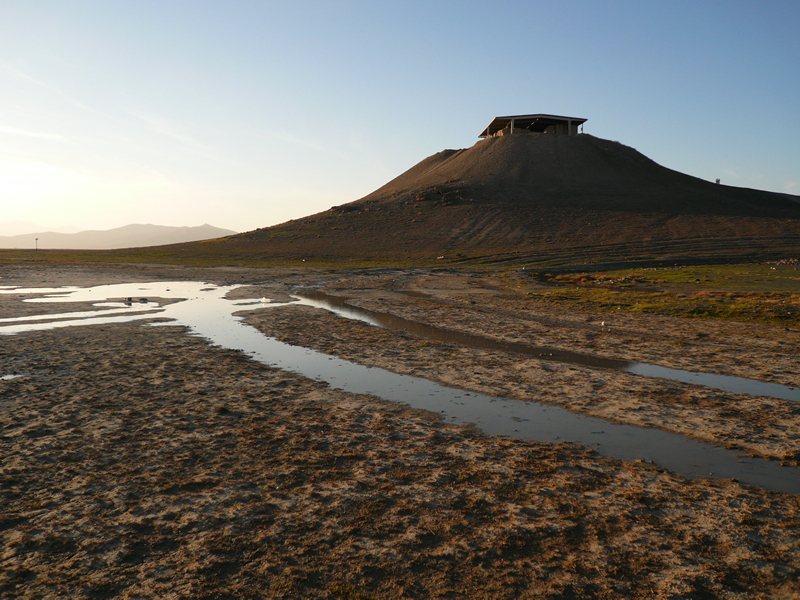 Tepe Nush-i Jan from the east

Media according to Polybius

Polybius is the only ancient author other than Herodotus with anything extensive to say about Media and its capital Ecbatana. He is mightily impressed by its wealth, its horses, the splendour of the city and its situation - and the magnificence of its royal palace. But archaeology has so far revealed nothing.

"Media is the most remarkable kingdom in Asia: it is large, populous and produces fine men and excellent horses. The country supplies these animals to virtually the whole of Asia: because of the suitability of the terrain, the imperial business of horse-breeding has been handed over to the Medes. It is dotted with Greek cities, as was Alexander's policy, to protect against neighbouring barbarians: Ecbatana is the exception. It was set in the northern part of Media, and borders on the Black Sea and the Sea of Azov [Maiotis]. It was the ancient capital of the Medes - its wealth and the sumptuousness of its buildings seeming to have marked it out from other cities. It lies beyond the mountains facing the Orontes, it is unwalled, and has a man-made citadel, amazingly-well adapted for defence. Below this is a palace which it is equally hard to describe as to pass over in silence…

The palace is roughly seven stades [furlongs: ie over a kilometre] in circumference. The sumptuousness of its architecture reveals the prosperity of its original builders. The woodwork is all cedar or cypress, and none of it has been removed, but the beams, the ceilings and pillars in the colonnades and courtyards were all covered with gold or silver cladding, and the roof-tiles were all silver. Most of this was unfortunately stripped off during the assault by Alexander and the Macedonians, and what remainied was removed under the regime of Antigonus and Seleucus the son of Nicanor. Nevertheless, during the time of Antiochus the temple known as "Aene's" still had its gilded pillars all round. and many silver tiles had been installed on it, and there were a few golden and a greater number of silver bricks remaining."

NEXT: ENTER THE PERSIANS

An Iranian-speaking people who had migrated on to the north-western part of the Iranian plateau at around the same time (c1000 BC) as their Persian relatives. They shook off Assyrian domination and established their influence across western Asia, including their neighbours the Persians .

But hard facts about them are scarce: very little archaeological evidence has emerged which definitely relates to the Medes - even in their capital at Ecbatana. Greek historical accounts appear fanciful, and references in Assyrian and Babylonian chronicles are brief.

Whether or not they "ruled over" Asia, they were seemingly at least partly responsible for finishing off the Assyrian and Urartian empires.

After their incorporation into Cyrus' empire, they become virtually one people with the Persians - hence Greek usage of "Mede" interchangeably with "Persian" - and the verb "medize" - to favour the Persians over fellow Greeks.

Wrote a history of Babylon during the Seleucid period (c 285 BC). It survives in later translations into Latin and Armenian by Christian writers.

In his semi-fictional Cyropaedia (Education of Cyrus) Xenophon depicts the refined and sophisticated court of Cyrus' grandfather Astyages.