Like the Afshars, the Qajars were a Türkmen tribe, part of the Qizilbash confederacy who had rallied to support the Safavid conquest of Iran. It's assumed, that like the Afshars, they entered Iran with other Oghuz tribes in the 11th century (there's no record). After the end of the Il-khanate and the advent of Timur, they would have moved west into eastern Anatolia. They would have moved again, into Azerbaijan in the 15th century during the Aq-Quyonlu period, where, like other Oghuz they would have come under the influence of the Twelver Shi'ism associated with the Shaikhs of Ardabil, ancestors of the Safavids. They thereafter played a significant, though minor, part in the activities of the Qizilbash tribal forces. Abbas I moved half the Qajars from Azerbaijan to Mazandaran, ostensibly to strengthen the frontier against the Uzbeks. By the time of the Afghan invasions, they had established a tradition of loyalty to the Safavids. Hence their leader, Fath Ali Khan, offered support to Tahmasp II when he fled from Isfahan, and joined him in the attack on Mahmud Sistani in Mashhad: Tahmasp was also reinforced by a small force under Nader Quli - under whose spell Tahmasp immediately fell. The Qajar leader was spurned, and was soon murdered (October 1726). In 1740 the new Qajar chieftain, from a different branch of the clan, Muhammad Husain Khan, who had supported Nader Shah transferred his loyalty Nader Shah's son, Reza Quli. They murdered the deposed Safavid shah, Abbas III, and his father Tahmasp, and plotted to assassinate Nader himself. Soon though, there was conflict between Husain, and Fath Ali Khan's son Muhammad Hasan Khan - as well as with the Afghans and the Zands. After Nader Shah's death, his son Adil Shah prevented Hasan from regaining Mazandaran, and, though Hasan escaped, captured his son (aged 5 or 6) - and had him castrated. This was Agha (or Aqa: "The Eunuch" ) Muhammad Khan Qajar, the future shah, and founder of the Qajar dynasty.

In 1759, Hasan, who with his son had been fighting to become unchallenged ruler of Iran, was defeated by the Zands under Karim Khan (see previous page), and his son was again captured - and remained a hostage (though well-treated) for the next 20 years. In the confusion after the death of Karim Khan Zand in 1729, Agha Muhammad escaped .... See here for the rest of the story of his rise to power. 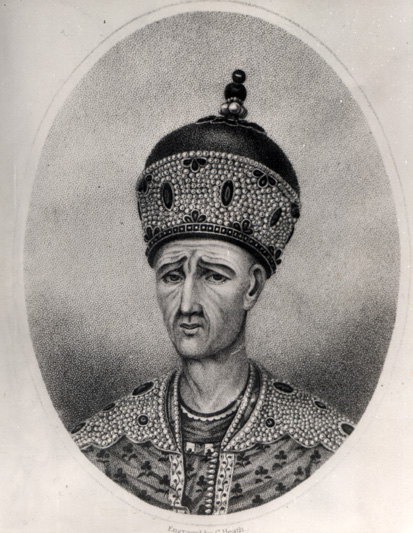 The mercifully brief and bloody rule of Agha Muhammad has been covered here. He's remembered as one of the most vicious and unpopular rulers in Iranian history - but he was a highly successful military commander and strategist, and left an Iran united and secure for the first time in several centuries. There was unfinished business with the Russians in the Caucasus, though. Although there was the usual confusion and struggle for power after his assassination - his designated successor, his nephew Baba Khan, soon asserted his authority, and was crowned as shah Fath Ali Shah on 21st March 1798 (Nauruz) in the Gulistan Palace, Tehran. 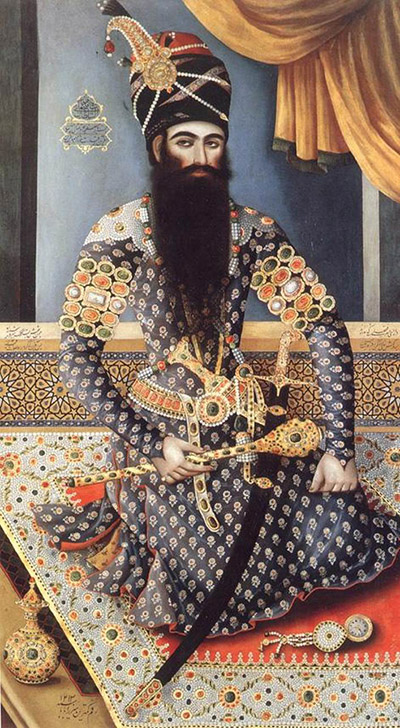 "[The Caucasus] is Russia's Wild West, though the mountains lie to the south of Moscow. Here since the 17th century, Russian colonisers have tried to subdue a congeries of proud peoples: Chechens, Ingush, Ossetes, Daghestanis, Abkhaz, Kartvelians, Kakhetians, Armenians, Azeris ... The complex emotional reaction of the Russians to the very fact of the Caucasus, which both tantalize and threaten them, opens a window on to the entire Russian story."

Russia had been drawn into Persian affairs most recently by Agha Muhammad's treatment of Georgia - an Iranian province, from where there had been a ready supply of Christian slave-soldiers (ghulams) since the days of Tahmasp I and Abbas I. Georgia had virtually declared itself a Russian satellite for its own protection against attacks by Nader Shah and Agha Muhammad. Russia's intervention had been muted during the reigns of Catherine II and Tsar Paul - but after Paul's assassination in 1801, Georgia was annexed. Resistance was crushed.

But geopolitics was now very different: events in Iran, for the first time, impacted on the great European powers - Britain and France as well as Russia. The story of their involvement - though serious for Iran, from an outsider's viewpoint, resembles a school playground where best friends in an instant become deadly enemies and vice versa.

1 1801 Britain allies with Iran against Afghans - due to worry over India, and shock at Napoleon's invasion of Egypt in 1798. Mission from East India Company, led by John Malcolm. French excluded from Iran, suspected of planning to attack India with Russian support. 1804 Russia invades Caucasus. Massacre of Muslims. Checked by Abbas Mirza, son of Fath Ali Shah.

2 1805 Iran invokes 1801 treaty, but Britain refuses help to Iran against Russians, because they've now allied with Russia against Napoleon (crowned emperor of France in 1804).

7 1813 Russia and Iran make peace. Treaty of Golestan: Iran loses Azerbaijan and Georgia (though borders not delineated). Iranian fleet banned from Caspian: only Russian warships allowed. Russia to approve heir to throne. Angry reactions in Iran encouraged by religious leaders (mullahs). The humiliation implied by the treaties with Britain and Russia, allowing foreign interference, was not forgotten by Iranian nationalists.

8 1815 After defeat of Napoleon, Britain renews 1809 treaty with Iran. Britain to help and arm Iran in a war, provided that it is defensive.

10 1826 Second Russo-Persian war begins. Tehran declares jihad against Russia, Muslims in occupied Caucasus revolt and Iran reconquers territory lost in 1813 in Treaty of Golestan. Britain quibbles over the treaties of 1809/1815, and sees no need to help Iran, who was technically the aggressor.

11 1827 Russia counter-attacks, taking Yerevan (Armenia) and Tabriz. Abbas Mirza defeated. Iran surrenders. Perhaps it had been a mistake to take on an army that had defeated Napoleon.

12 1828 Treaty of Turkmanchai. Iran cedes all territory north of Aras river to Russia. Privileges for all Russians within Iran (only later for all Europeans). Fixed tariffs for trade with Russia. Iran to pay 20 million roubles in reparations. British had been reluctant to respond to treaty of 1814, on grounds that Iran was the aggressor. Mutual suspicion between Britain and Iran.

13 1829 Assassination of prominent Russian in Tehran followed by anti-Russian riots. Tsar Nicholas I, however, is still friendly.

He reigned for 37 years - a fact that in itself produced a modicum of stability after the half-century or so of chaos. He was not a great ruler - but in Abbas Mirza he had a son and heir who was energetic and forward looking. It was not really his fault that his battles were against a major power, with resources of men, money and materiel far beyond anything Iran could have produced. His premature death is widely regarded as a catastrophe for Iran. Fath Ali revived the traditions of luxurious living - in abeyance during the reigns of Nader Shah and Karim Khan - and spent much time in the harem: allegedly he fathered 260 sons by 158 wives. He also loved having his portrait painted - magnificently dressed and extravagantly bearded. But he couldn't disguise the fact that Iran had been humiliated by Russia and played for a fool by Britain and France. An attack on the crumbling Ottoman empire was an attempt to restore prestige. It achieved some success, but ultimately came to nothing when the army was stricken with cholera, and had to retreat. But Persia was not colonised. It did not, as once may have been feared, become another India. And his subjects probably mostly enjoyed a modest prosperity - if they had not been living in the Caucasus region.

"Persia is at present happier and more tranquil than it has been for a long period; its monarch, by the comparative mildness and justice of his rule has entitled himself to a high rank among the kings of Persia."

NEXT: IRAN BETWEEN RUSSIA AND BRITAIN

The Georgian king, George XII, had recognised Paul as his sovereign in 1800. He too died in 1801.

The Anglo-Iranian treaty was grotesquely one-sided. The Shah agreed to attack Afghanistan if it invaded India: the British agreed not to intervene if Afghanistan attacked Iran!

The crown prince, chosen already to succeed his father (though he wasn't his eldest son - but the one with a Qajar mother). He was appointed Governor of Azerbaijan - hence his personal involvement with the Russian activities. He was also responsible directly for all foreign affairs, and commander-in-chief of Iranian forces. He was assisted by two astute politicians, father and later son, who both held the title Qa'em Maqam.

Fath Ali Shah wanted to fight pitched battles to prove he was on a par with the Russians. He wasn't. If he'd resorted to guerilla tactics (perfectly suited to the terrain) he's have done better - as the Lezges did against Nader Shah - and the Chechens in later times.

This was Alexandr Griboedov, writer and friend of Pushkin. He alienated Iranians by insisting on repatriating female Russian prisoners from 20 years ago, who'd converted to Islam, married, and had no wish to return to Russia.