Iran: end of the Qajar dynasty

THE END OF THE QAJARS

End of the revolution 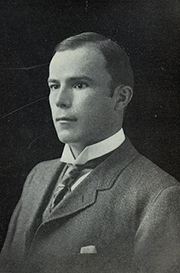 In 1907, the second Majlis was elected, liberal elements having gained the upper hand. It was elected after a change in the law allowing for a single class of voter - and parties had begun to emerge: the Moderates, led by Bihbahani, and the Democrats, led by Taqizada. Each party tended to be denounced by the other for being "pro-British" or "pro-Russian". But it was soon over. In 1910, Bihbahani was assassinated, and Taqizada left Iran (though he almost certainly had nothing to do with the murder). In desperate need of financial reform, they appointed a neutral expert - a young American lawyer called Morgan Shuster [right], who'd done something similar in Cuba.

He immediately set out a series of far-sighted, necessary and effective reforms (and not just in finance) - The British were uncooperative, but the Russians, needing Iran to be kept backward so they could exploit it better, "persuaded" the authorities (Russian troops were threatening Tehran) to scupper the arrangement on the grounds that Shuster had appointed a British officer to collect taxes in the north, their sphere. In December 1911 there were demonstrations, including one by women, in support of Shuster, but the second Majlis was dissolved, Shuster was sacked, and yet another opportunity for Iran to get its act together was thrown away. Russian troops were there to suppress dissent - they fired on protesters in Mashhad. The constitution remained, though, but there were no more elections until 1914 - and Russia still occupied northern Iran. The spirit of the revolution, and its ideals and aspirations had not been crushed - and would come to life again soon. For a while the ideals of the revolution was upheld by Kuchek Khan, leader of the Jangali ("forest"; =jungle) movement - but it was a local phenomenon, confined to Gilan on the Caspian. They were supported by the new Russian Bolshevik regime after 1917 - but eventually crushed by Reza Khan in 1921

It wasn't until 1908 that Knox D'Arcy's exploration produced results: he struck oil near Ahwaz in Khuzistan, a region at the time virtually independent under its Arab ruler, Shaikh Kha'zal. In 1912 the Royal Navy, under advice from Winston Churchill (then First Lord of the Admiralty), converted its ships from coal to oil. In 1914, the British government bought a majority of shares (51%) in the Anglo-Persian Oil Company, later the Anglo-Iranian Oil Company, and eventually British Petroleum (BP). Britain was now controlling the south of Iran, as Russia was the north, and control of the oil was now essential to the security of Britain and its empire. Britain was desperate to modernise its fleet to keep one step ahead of the Germans, who under Kaiser Wilhelm II were building warships at a furious rate. Britain, France and Russia had formed the Triple Entente against Germany in 1907. Gradually Britain was replacing Russia as the dominant influence in Iran - this raised fears of Britain's intentions in the region. The carving up of the Ottoman empire after 1918 proved they were right to worry. 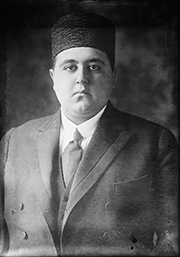 In 1914 Ahmad [right]was crowned shah, at last. A third Majlis was convened, but with many problems - Russian interference being the most serious. There was now a third element - not an actual party, but made up of hard-line conservatives, who wanted to enforce the ulama's oversight of the laws, and opposed any foreign-influenced innovations. The third Majlis voted against having religious authorities vet legislation for spiritual orthodoxy. In August 1914, the Great War had begun - in November Ahmad Shah proclaimed Iran's neutrality. This had no effect on the activities of the belligerents. The Majlis was divided: Moderates for the Allies, but the Democrats (who had a majority) for Turkey/Germany. The British and Russians decided the Majlis should be closed down again.

Turkey had now allied with Germany. The Ottomans, led by the "Young Turks" hoped to spark a pan-Islamic jihad against the Allies, and invaded Iran. Russia fought hard to repel them from northern and western Iran - but the Turks managed to establish control in the north, and the Germans in the west. Gradually the war turned against Germany - the British, set up the South Persia Rifles in 1916, and with Arab (from Shaikh Kha'zal) and Bakhtiari help, steadily regained territory. Despite the withdrawal of Russian troops after 1917, by the armistice in 1918, Wassmuss had been captured and the British controlled Iran.

Iran was, however, a basket-case. Russian trade was no more (it used to be 65%). There was famine. There was Spanish flu. Parts of the country were under tribal rule once more (though this was actually the norm in Iran during any hiatus in central control): Azerbaijan proclaimed independence (in 1920 as "Azadistan")- and the Jangalis, now with Bolshevik support, were still a problem in Gilan: The "Socialist Republic of Gilan" - having earlier seen off British and Tsarist Russian forces - was proclaimed, also in 1920.

The wartime alliance of Britain and Russia had not benefited Iran. Now revolutionary Russia was out of the picture, the focus was on Britain's post-war plans. Some dreamed of a chain of British "protectorates" via Libya, Egypt, Palestine, Transjordan and Iraq - with Iran now bridging the gap to complete the "ownership" of the route to India and beyond. Britain made sure the Iranian delegation to the Versailles Peace Conference got no hearing.

Plan A. The British intended to make oil-rich Iran (as well as Iraq) a "protectorate" - virtually an addition the British empire. The instigator of this scheme was Lord Curzon [right], the Foreign Secretary. Large bribes were handed out, and in 1919 the shah agreed to it. But it could not be ratified in the Majlis as most elements in Iran were outraged at the idea. Britain did not realise how toxic she had become, and acted as if ratification was a done deed. Fazlollah committed suicide, saying he refused to allow British imperialism to call the shots. It was dropped in 1921.

Plan B. If Iran could not be a British possession, at least Britain could ensure a stable pro-British government, headed by a British-approved strong man. Major General Edmund Ironside, commander of British forces, knew of just the man.

The Cossack Brigade was Iran's elite fighting force - originally a Russian idea to ensure cooperative shahs, for whom it acted as a bodyguard. After the Russian revolution in 1917, its Russian officers had been dismissed and replaced by Iranians. A sergeant in the brigade, a man of humble origins, was promoted to lead it. He was 42-year-old Colonel Reza Khan - and this was the man General Ironside chose to carry out the British plan. He let Reza Khan know that the British would not object or intervene in the event of his leading a military coup. On 21February 1921, Reza Khan's Cossacks entered Tehran. He became Minister of War, and a pro-British journalist and nationalist Sayyid Zia al-Din Tabataba'i became premier. Reform and independence were promised. Treaties with Britain and Russia were annulled. Soon the premier was replaced, as Reza Khan gathered more power - which he consolidated by picking off the various tribal rebellions (including the Bakhtiari and the pro-British Arabs) one by one with his Cossacks - and in particular the Jangalis (in 1921). Having become supreme commander of the Iranian forces, he became premier in 1923. In 1925, he adopted the name Pahlavi - linking himself with the Parthian dynasty of ancient Iran. Finally, he proclaimed himself shah, forcing the last Qajar - who was "on vacation" in Europe - to abdicate.

The Bakhtiari tribe were hostile to the shah, the Russians, and the Majlis. When they defeated the former shah, Muhammad Ali, who with Russian backing was attempting a coup, they were in pole position. The regent for the teenage shah Ahmad (his Oxford-educated uncle Naser al-Mulk) appointed the Bakhtiari leader Samsam Saltaneh as Prime Minister. But Russia soon took back control - the regent departed, Samsam resigned, and, in 1914, the Majlis was restored.

Later wrote a devastating memoir of his time in Iran called The Strangling of Persia. Iran favoured the USA, as a non-imperialist power, and a trade deal had been concluded in 1896. However the US had no wish to get involved officially - Shuster was employed by the Iranian government, not the US.

Some protesters had sought sanctuary in the shrine of Imam Reza, the 8th Imam. The Russians shelled the actual shrine - a scandal.

A pipeline was laid to a refinery on Abadan island in the Shatt al-Arab. It was owned by Shaikh Kha'zal, who did well out of the agreement. Oil began to flow in 1916.

The Germans saw Iran as a route to threaten India. They were led by Wilhelm Wassmuss (The German "Lawrence of Arabia") and things at first looked good.