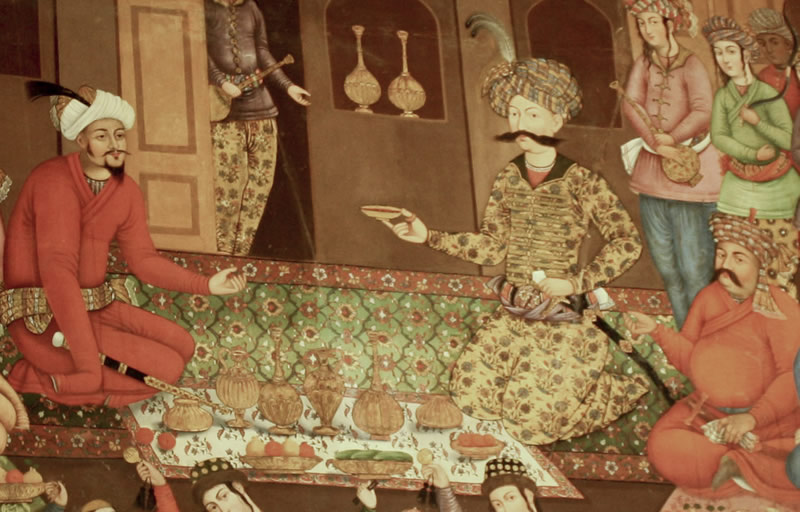 There was not much more than half of Tahmasp's territory for the new sixteen-year old Shah to inherit. Internally it was being torn apart once more by warring Qizilbash amirs. His first task was thus to reconquer his own country. In the east, the Uzbeks had occupied Khorasan and Sistan (including Herat) - and the Mughal emperor Akbar had grabbed Qandahar. In the west the Ottomans were in charge of Azerbaijan (including Tabriz, the former capital), most of the Caucasus, plus Iraq (including Baghdad) and Khuzistan. Portugal had control of the Persian Gulf, having seized the port of Hormuz and the island of Bahrain.

But the young Shah had a plan. He made peace with the Ottomans - on highly disadvantageous terms: but he needed to buy time. At the Peace of Istanbul in 1590 he ceded Azerbaijan (keeping the Safavid family shrine at Ardabil, though), his Caucasian territories, Iraq and even territory to the east of the Zagros. He had to agree to stop the ritual cursing of the first three Caliphs (who were not recognised by the Shi'a) - a humiliation for him.

He was now free to deal with the 10-year occupation of Khorasan by the Uzbeks. By 1603, he'd regained most of Khorasan - but a foray into Transoxiana had been only temporarily successful. Eventually Abbas even won Qandahar back from the Mughals (in 1622) .

With the east relatively secure, Abbas could return to the Ottoman problem. He regained Azerbaijan, much of the Caucasus and most of Iraq - and even penetrated into the Turkish sphere as far as Diyarbakr. He took Bahrain, and drove the Portuguese out of Hormuz, with English help (1622). By the end of his reign in 1629, Shah Abbas had restored the borders of Iran to what they had been in the time of Ismail I, and actually expanded them. 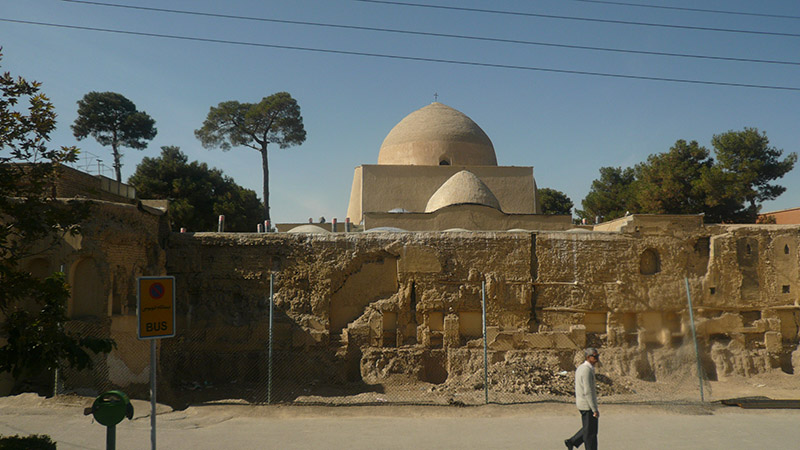 Vank Cathedral, Julfa, Isfahan, built for the Armenian community in 1606; since much enlarged and rebuilt. Note cross on top of dome. Photo AMW

Abbas maintained his family's role as master of the Safaviyya and frequently visited Ardabil. He also made pilgrimages to other Shi'i holy places (including to Mashhad on foot). Mashhad was beginning to replace Ardabil as the favoured Safavid shrine, with Abbas regarding himself now as a sayyid (descendant of Ali). He was tolerant towards Jews and Christians - even building a church for the 3000 Armenian families he imported from Azerbaijan and settled in Isfahan: less so towards the Sunni, and certainly not towards current heretical Islamic movements, who were persecuted rigorously (especially the Nuqtavis who also had a political agenda). Sufi organisations were suppressed as far as possible - celibacy (a Sufi thing) was disparaged, and married life encouraged: appropriate gender roles in public places were defined, and "idleness" in men discouraged. He built the huge Royal Mosque in Isfahan in 1612 with war booty from the Ottomans and Uzbeks - a space to unite all his subjects under the Shi'i faith. 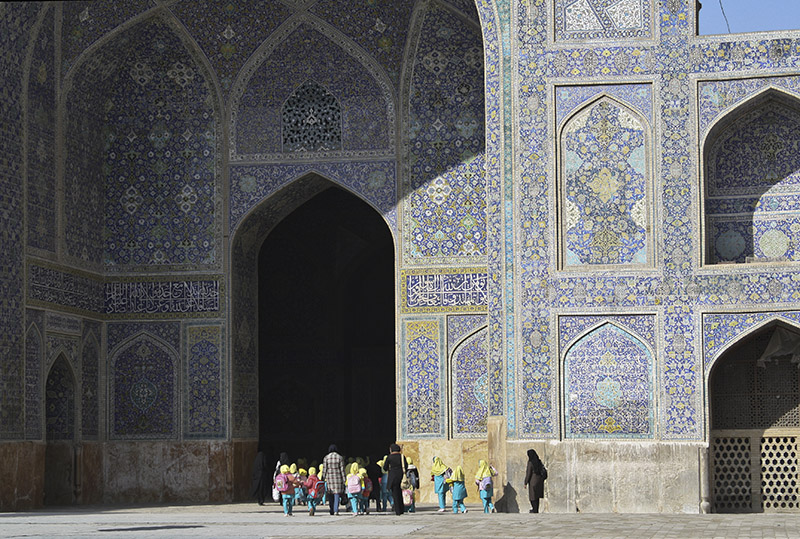 The Royal Mosque, Isfahan, built by Abbas I. Photo AMW

Much of Abbas' success was due to his reorganisation of the military system. For many centuries, troops had been provided for the shah when requested from the "private armies" of the various amirs, whose loyalty could not always be relied upon - and who in fact frequently challenged the central authority of the current shah. First he purged the Qizilbash amirs who had rebelled, including in the end even Murshid Quli Khan, who had set him on the throne. Then he built on Tahmasp's policy of training an army that would be loyal to him personally - recruiting it from descendants of the Christian Georgians, Armenians and Circassians taken by Tahmasp - and increasing it from prisoners he took himself in these regions. These ghulams (slave soldiers) formed a standing army, controlled - and paid - by Abbas himself. Nothing stopped them from rising to positions of leadership and responsibility. They included cavalry, artillery units, infantry armed with muskets - and a personal bodyguard of 3000 men. Total strength was around 37,000 men - to which traditional Qizilbash units would have added the same number again.

The new army needed pay - and the royal treasury couldn't afford it (Qizilbash amirs paid for their own troops). Abbas solved the problem by taking traditional tribal lands into royal ownership - on a huge scale. Their revenue now went directly to him. Ghulams soon began to take up increasingly important administrative positions - all helping Abbas' policy of centralisation. The Qizilbash were by no means destroyed - but their power was cut back considerably. Some tribes (such as the Afshars and Qajars - later to provide ruling dynasties) were actually broken up and resettled in other parts of the country.

Abbas liked Isfahan - which was perhaps his main reason for relocating from Qazvin. It was more central, on a river - and it had been a capital before, under the Seljuqs (they'd made spectacular additions to the Friday Mosque). It also symbolised the ongoing Iranification of the empire. Isfahan as visited today is largely Abbas' achievement: especially the great square (Maidan - on the site of an ancient polo ground), surrounded by the Ali Qapu (entrance to the palace), Lutf Allah Mosque, Royal Mosque and the Bazaar; and the Allahverdi Bridge. 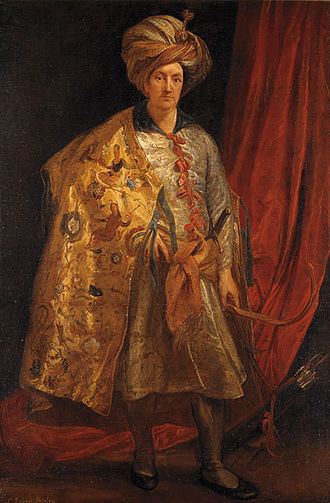 The Portuguese had dominated the Indian Ocean since Vasco da Gama established the sea-route to India in 1498. They now controlled the Gulf, having earlier established a base in Hormuz and, in 1525, taken Bahrain from under Ismail's nose - in any case he had no navy to confront them. But Abbas was determined to confront them. In 1622, the English East India Company (founded 1600), with their own ships to match those of the Portuguese, helped evict them - in return for access to Persian trade. But the Dutch East India Company (founded 1602) was soon active in competition. The Farman granted to the EIC after the capture of Hormuz in 1622 regulated relations between Persia and the British for over a century. In time, though, Abbas allowed the Portuguese an opportunity to resume trade in the Gulf, subtly accommodating them along with the British, while later shahs extended these privileges to Dutch and French traders as well..

English travellers included Sir Anthony and Sir Robert Sherley, who advised the shah on military matters - and left an account of their journeys.

The aristocratic Italian writer and musician Pietro della Valle wrote letters to a friend in Naples recounting his remarkably extensive and exciting travels throughout the Middle East. He was an honoured guest of Abbas in Isfahan.

The Huguenot merchant Jean Chardin lived in Isfahan for many years, and wrote a very full account of life there at the time.

Various Christian missionaries - tolerated by Abbas - have left accounts of their visits, including the French monk Raphael du Mans, who lived in Iran for 50 years.

There had been two major civil wars following the death of a Safavid shah. Abbas wished to avoid this unseemly descent into chaos - but the way he chose to do this made things even worse. Based on his own experience as a seven-year-old provincial governor exploited by ambitious amirs, he decided to follow Ottoman practice and give his extended family no experience of government - or of anything much. He shut them away in the harem - thus shielding them from the world, with only women and eunuchs to learn from. This was after he had murdered his eldest son (1615) - who was undoubtedly innocent of any plot against his father - and blinded two more (to prevent their succession). The other two just died. He thus left no son to succeed - and more distant relatives had no knowledge of or even interest in taking over. Yet, amazingly, the dynasty survived, despite a series of incompetent rulers, for another century. This can only be down to the strong and stable regime that he established..

Abbas' Isfahan -"half the world" - despite the loss of many fine buildings since his day, is still "the most impressive gallery of Islamic art in the world" [Axworthy]. As well as architecture, the artists in metalwork, textiles, carpets, miniatures and ceramics all produced beautiful things. Abbas in several ways laid the foundations for modern Iran - Shi'ism became dominant, the frontiers have changed only a little since - and Iran is still surrounded by hostile Sunni regimes. His army was modernised - up to a point: muskets and gunpowder, yes: but no to cannons and sophisticated siege technology. Cavalry remained important. Persian culture and language became the mark of civilised societies - in Central Asia, among the Mughals in India (especially) - and even the detested Ottomans used the Persian language and imitated Persian poetry.

NEXT: A HUNDRED MORE YEARS... 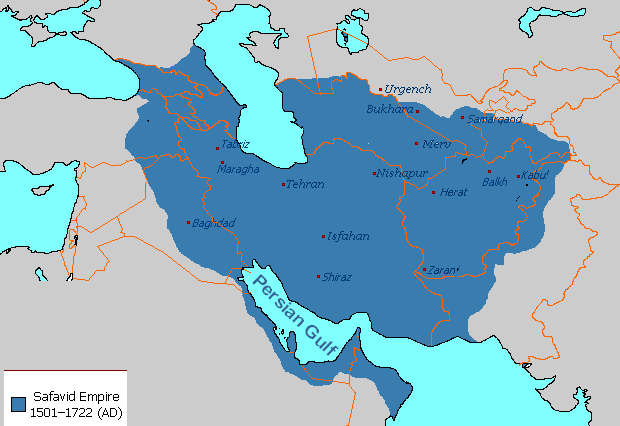 The Safavid empire at its greatest extent

An order of Sufis who believed that at the end of the Muslim millennium (1590) the Mahdi would emerge from among them, end the rule of Islam, and restore Persia to its pre-Islamic state. Abbas was worried (because he believed in prophecies) and pretended to go along with the Nuqtavi millennium: he ostensibly surrendered his crown to their leader, but then had him shot - a clear message!

The current ruler of the Mughal empire in northern India founded by Babur, the Timurid.

Beards in men became an obsession - and shaving was un-Islamic. A beard was a symbol of maturity, responsibility and loyalty to the Shah. Sex between men was now taboo - and heterosexuality within marriage was seen as an essential antidote to Sufi notions of "union with God" and suchlike heresies.

Thanks to the Ottomans, access to the holiest Shi'i shrines in Iraq (Najaf and Karbala) was becoming difficult. And Ardabil declined as Abbas tried to wean his subjects away from Sufism. Qum was boosted along with Mashhad.

The thrifty and hardworking Armenians were needed to boost Isfahan as a centre of craftsmanship. The community became very prosperous - it still exists, in the same area in the south of Isfahan where Abbas settled them (Julfa). Their number eventually rose to at least 30,000. They were persecuted briefly during the later Safavid era, but otherwise allowed to practise the Christian religion in peace.

The 33-arched bridge, named for Allahverdi Khan, a Georgian ghulam who rose to command armies and become governor of Fars.

The most important commodity was silk, produced in the Gilan area south west of the Caspian. It was a royal monopoly - and traded east to India and west to Europe. But Persian wine from Shiraz was also an important export (and mentioned in the farman). Rosewater from Persia, along with wine and silk, also made excellent gifts to important rulers and clients aoround the world.