THE END OF THE SELJUQS

Under the Buyids and the Seljuqs it appeared that the Abbasid caliphate had been reduced to a mere spiritual and symbolic role. The caliphs were respected as religious leaders, but were politically side-lined. But they were not finished after all. Quarrels within the Seljuq family allowed them to reassert themselves - starting with the energetic al-Mustarshid (1118-1135) and continuing with al-Muqtafi (1136 - 1160). Al-Muqtafi recruited his own army of Greeks and Armenians (not Turks) - and on sultan Masu'd's death in 1152 extended the caliph's authority over much of Iraq, for the first time since the early 900s.

He was the first Caliph to get sole power over Iraq, to the exclusion of any sultan since the time when the Buyids first appeared.

He took over the sultan's palace in Baghdad, encouraged the regional amirs who opposed the Seljuqs, and led his army to success in battle. Once again the Abbasids ruled - but only in Iraq.

Al-Nasir (1180 -1225) restored the Abbasid caliphate to centre-stage. He left the struggle against the Franj ("Crusaders") to the Kurdish Ayyubid dynasty, which under the leadership of Saladin had put an end to Fatimid rule in Egypt in 1171. In the east he tried to stem the advance of the Khwarazmian empire but his role as a religious leader was also significant. He tried to reconcile the various Islamic divisions, founding the Rahhasiyya order of which the Ayyubids, the Rum Seljuqs and the Ghurids became members - and even the Shi'a Ismailis, and, eventually, the Khwarazm shahs. More on Saladin here

By the time of sultan Masu'd's death in 1152, most of the Seljuq empire had disintegrated, leaving his successors no more than the province of Jibal (Hamadan and Isfahan). Sanjar ruled for a little longer independently as "king of the east" (until 1157). The title of Sultan continued to be conferred on various Seljuq descendants, until the last one, Toghrul III, was killed during an invasion by the Khwarazm shah Tekish in 1194. 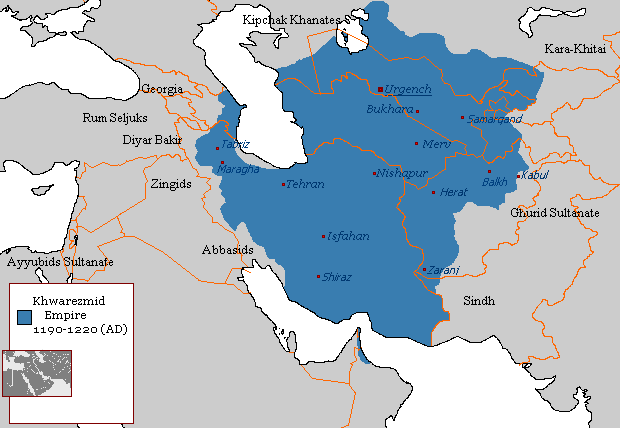 The Khwarazm shah took advantage of Sanjar's death in 1157 to begin expanding into former Seljuq territory: in 1194 the Khwarazm Shah Tekish eliminated the last Seljuq sultan. His son, Muhammad II took on the Ghurids, Qarakhanids and Qarakhitay - with eventual success. The Abbasid caliph was forced to acknowledge his supremacy. From his capital at Gurganj (Urgench), by 1217 he dominated the Iranian plateau entirely (see the map above), as well as all Central Asia, Afghanistan and parts of India. Khwarazm was extremely wealthy, but its cultural life was a shadow only of former glories, as the ruler concentrated on military efficiency and ruthless control of the disparate - and heavily taxed - peoples of his empire. As an antidote to the harshness of the rule of the Khwarazm shah, the mystical version of Islam - Sufism - became increasingly popular. The extent of his rule masked its inherent weakness; he was unable to rely on the loyalty of his family, his army, or his religious officials (he was flirting with Shi'ism as a symbol of his enmity with the Abbasid caliph al-Nasir). And the Mongols were getting closer … 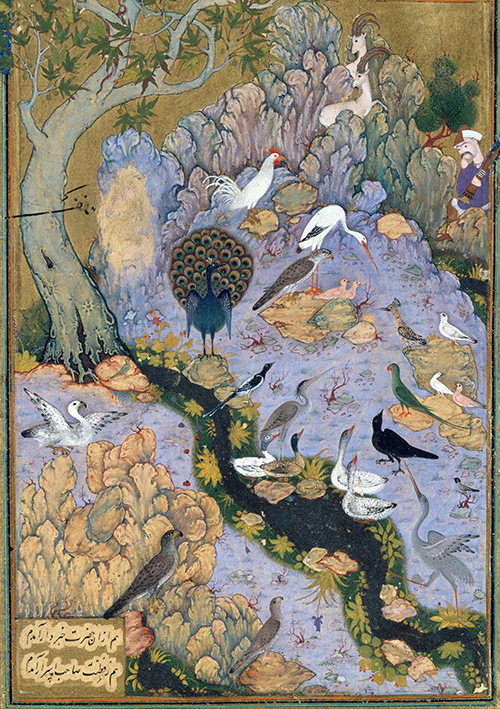 Illustration of "Conference of the Birds" (Mantiq-ut-Tayr) - from a 16th century folio. The story is by Attar of Nishapur, a 12th century Sufi. The hoopoe is adderessing the assembled birds (see here).

THE SELJUQS IN IRAN - AN ASSESSMENT

Last days of the Seljuq supremacy

In the west, the Abbasid recovery, in the east threats from the Turkish Khwarazm shahs - and then the Mongols.

The Ayyubids had replaced the Seljuq-supported Turkish Zangids, allowed to rule Syria from Mosul, with Saladin proclaiming himself sultan in 1174. By 1183 their power had been extended through conquest to include Syria and northern Iraq, Egypt and the north African coast, and the eastern side of the Red Sea in Arabia as for as Yemen. In 1187 after the Battle of Hattin, the Crusader Kingdom of Jerusalem fell to Saladin.

A version of Islam that offered direct access to god (like Gnostic beliefs in the West), personal salvation, and enlightenment through quiet meditation, prayer and solitude.

The first Sufis are recorded in history in 8th-century Iraq and Syria. At this point, the Sufi community consisted of individuals who lived a solitary life characterized by asceticism and isolation. As their ideas spread, however, Sufi orders, schools, and monasteries were founded.

The path to God has been described by Sufis as “the disappearance of the self.” Rich imagery in poems by Sufism’s many masters reveals the personal experience of devoting oneself to and becoming one with God. The following verse about a Sufi’s mystical union with God was written by the legendary Sufi master al-Hallaj (857-922), who was sentenced to death for blasphemy:

The philosopher and theologian al-Ghazali (1058-1111) was especially important for the wider acceptance of Sufism’s ideas. With his interpretation of moderate Sufism, emphasizing improving the individual’s morals and public ethics, Sufi brotherhoods spread to the entire Islamic world beginning in the 12th century.

It was becoming the Islamic mainstream in Central Asia when the Mongols struck, leaving no opportunity for the Sufis to confront the orthodox Sunnism of the Caliph. Among the most significant Sufi mystics of the time was the poet Attar (1145 -1221), the author of The Conference of the Birds. The birds search the world for Simurgh, Truth, their king. Thirty of them survive the valleys of the seven temptations, only to find Simurgh is not there. They realise that Simurgh (Persian si murgh = "thirty birds") is themselves. Truth is to be found in themselves - in the form of self-awareness. Attar was saying that the individual could rescue himself from a world dominated by reason, law and science (ie the last 300 years of intellectual progress in Central Asia!)