Shapur I - his achievements)

The 70,000 Roman prisoners from Valerian's army were put to work - and not just as labour. Sasanian progress in architecture, engineering and the arts got a great boost from the craftsmen and specialists in the Roman army. Twenty bridges are known about - of the best preserved, one is at Pol-e Dokhtar (Maidenbridge), where the Royal Road connecting Persis with Mesopotamia crossed the river Choaspes in Lorestan. It had 8 arches, and was 270 metres across. 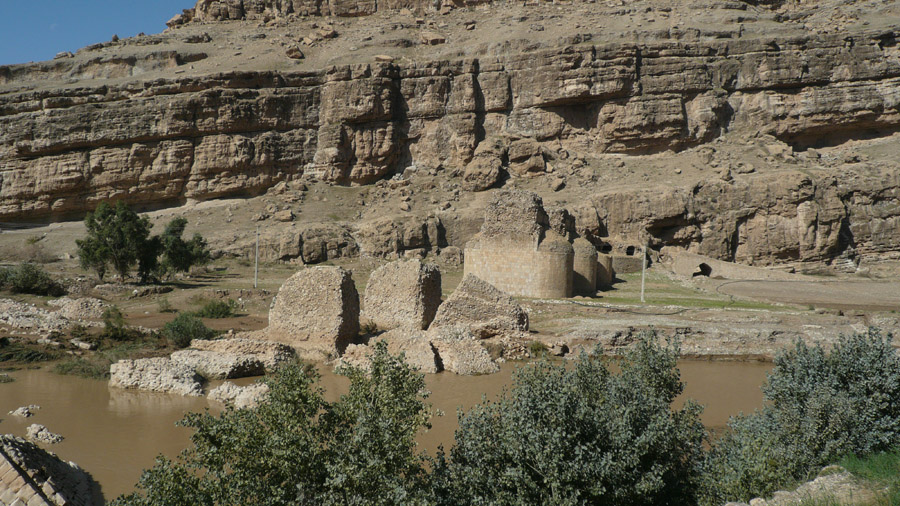 Pol-e Dokhtar, "bridge of the daughter" built in the reign of Shapur I

The other is Band-e Qaisar ("Caesar's Bridge") the bridge at Shushtar, already mentioned, which was part of a water-management complex involving a very sophisticated dam and water-mills. It was even larger, spanning 550 metres.

Shapur's Roman prisoners also worked for him on a new capital, to replace Ardashir's old-fashioned Parthian-style circular city at Firuzabad. It was called Bishapur (Shapur City), and laid out with a Greek/Roman style grid plan, with crisscrossing streets, rather like a Roman camp. As well as what has been claimed to be Shapur's palace, there was a partly subterranean building, through which water could be diverted - possibly a fire-temple dedicated to Anahita. There are walls with round bastions, and remains of several houses. The site is currently being excavated. Bishapur was only one of Shapur's new cities - the Sasanians were essentially urban people (in contrast to the Parthians, and the many nomadic tribes that they ruled). 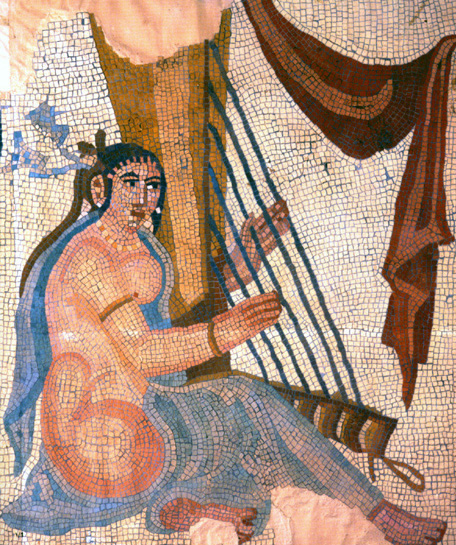 Click here for more pictures and information about Bishapur;

Religion: a new faith for a new empire?

Shapur came from a religious family - his ancestors had been priests of Anahita and were believers in the power of Ahura Mazda (as shown on coins and inscriptions): but the Zoroastrian religion was at this time not yet a unifying force: there were important differences between the worship of Ahura Mazda, together with Anahita and Mithra as practised in Persis, and the Zoroastrianism of the north-east.

It was a time when several religions were competing for dominance - Judaism and Christianity in the west, and Buddhism on the eastern frontiers, as well as the various flavours of Zoroastrianism within the Persian empire. Shapur's solution may have been to try to introduce a completely new religion, based on the teachings of Mani. Or perhaps he was merely trying to offset the influence of the Zoroastrian priests, inspired by Kerdir.

Mani was born in Mesopotamia in AD 216, when it was still under Parthian rule, and he was said to have been related to the Arsacids. His parents brought him up in their rather strange sect - which had Jewish and Christian elements, and was concerned with bodily purity: it involved baptism and purifying rituals. 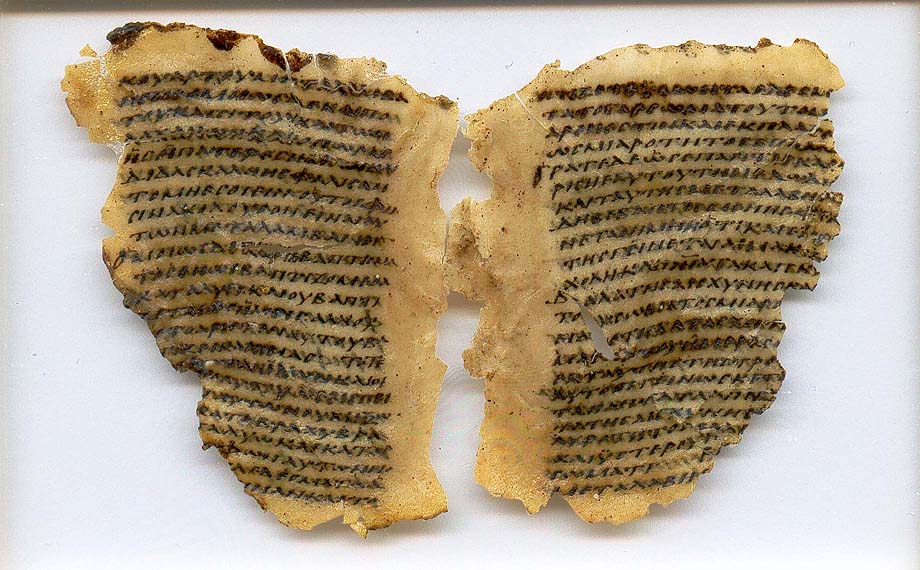 Two pages of a tiny book (the size of a matchbox) found in Egypt, written in Greek, which turned out to be Mani's biography

But this was not pure enough for Mani. He didn't just want to purify his body, but to escape from it, and purify the soul. For him all creation, including the human body, was evil - but each person contained a spark of divine light; life was a struggle to release this light from its prison of darkness. He identified very strongly with Jesus. Mani believed he was the "Paraclete" (from Greek meaning 'advocate') mentioned in the New Testament who would continue the work of Jesus to end suffering in the world. He taught his religion during his extensive travels in the Persian empire and India. His teachings took on a Buddhist flavour when he was with Buddhists - in fact he believed that the Buddha, Jesus and Zarathushtra were basically the same: he saw himself as completing the work they had begun to make the world a better place.

Followers of Mani (Manichaeans) were forbidden to do various things which might make purifying the soul more difficult: killing, eating meat, farming, eating vegetables, sex, drinking wine or milk, owning property, using medicine, washing and changing one's clothes more than once a year. Only a minority, the "elect" could be expected to endure this regime - but others could eventually improve their position by serving the elect. Unlike Jesus, Buddha and Zarathushtra, Mani published books himself explaining his beliefs clearly.

The Manichaeans' main difference from Christianity was their renunciation of the world as evil, and their belief that they could "know" God directly - with no need for the Church (this is why they were harshly persecuted by the Church.)

So why did it appeal to Shapur I, who entertained Mani at court and gave him strong support to spread his teachings in the empire? Possibly it was the idea that Mani's religion was universal - it could appeal to Christians, Zoroastrians and Buddhists alike, and thus help to unify his multi-ethnic, multi-cultural empire. Soon the Roman emperor Constantine was to use Christianity for the same purpose.

Shapur I may have liked the idea of a new religion. But the Persian traditionalists did not. He was violently denounced by the Zoroastrian chief priest Kerdir (Kartir), whose power had been growing steadily. When Bahram I, Shapur's son, became king, he had Mani arrested, tortured and put to death (AD 272). His religion did not die with him. Though banned and persecuted in Persia, Manichaean missionaries travelled east and west along the Silk Route - and it became a popular religion in Egypt and North Africa, and especially in Turkmenistan and in China, where communities of Manichaeans still existed in the 15th century AD.

In the gorge just outside Bishapur, Shapur began an astonishing series of reliefs showing his various victories over the Roman emperors Gordian III, Philip the Arab and Valerian I. Later Sasanians added their own reliefs - and they complement the Sasanian reliefs at Naqsh-i Rustam (where Ardashir commemorated his victory over the Parthians) and nearby at Naqsh-i Rajab. But the most impressive work of art from the entire Sasanian period is the colossal statue of Shapur I, carved from a huge stalagmite, in a limestone cave a few miles from Bishapur in the Zagros mountains. 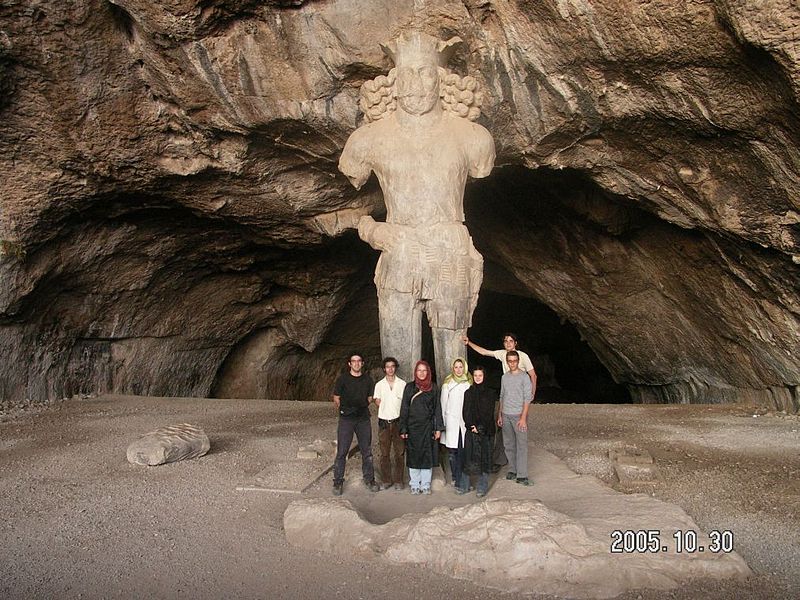 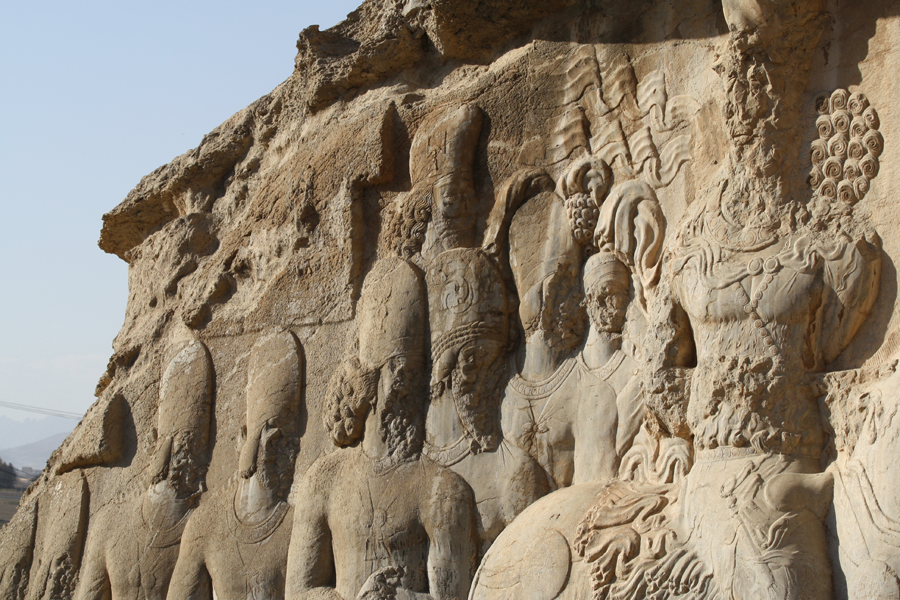 Shapur's sons and leading nobles process behind Shapur I on his great horse. Probably a celebration of the victories over Roman emperors Philip the Arab and Valerian (photo AMW)

NEXT: AN INTERLUDE - PALMYRA

New technical skills acquired from his Roman prisoners help Shapur improve communications and begin a process of urbanisation. And a new religion?

He also wanted a religion to help unite his multi-cultural empire: it seemed as if Manichaeism, a new religion with Christian, Zoroastrian and Buddhist connections founded by an Iranian, Mani, might fill the bill. But Shapur continued to worship Ahura Mazda, and under his successors Manichaeism was banned.

The worship of Ahura Mazda as practised by the Achaemenids, Parthians and early Sasanians is often called Mazdaism, to distinguish it from the later full-blown Zoroastrian religion.

Archaeological evidence from Sogdia and Chorasmia in central Asia - no longer part of the territory ruled by the Sasanians, but still inhabited by Iranians - shows that the religion remained strong in the areas where it may well have originated. It also lasted longer.

The Mandaeans still exist (just) though mainly exiled from their homeland in Iraq. They see themselves as the inheritors of ancient Babylon, though the religion owes much to Judaism (but no circumcision) and Christianity (but John the Baptist, not Jesus).

Mani's religion was dualistic: it was all about opposites: Body v Soul. Dark v Light. Evil v Good. In Christianity Good is stronger than Evil. In Zoroastrianism Good and Evil are equally strong. But for Mani, Evil is far stronger than Good.

The Shaker communities in the US also preached avoidance of intercourse: they survived by adoption. Priests in several branches of Christianity are still expected to maintain sexual abstinence.

Such belief about direct knowledge of God is called Gnosticism - the Catholic church was still trying to stamp it out in the middle ages. The Gnostic Cathars in southern France were exterminated in their thousands in the name of Catholic orthodoxy.

This was in the so-called Edict of Milan in AD 313, which legalized Christian worship.

At this time Christianity was seen as Judaism adapted for Greeks and Romans - a sort of Judaism available to anyone. But right from the start, Christians couldn't agree on what they were supposed to believe. Judaism is strictly monotheistic. There is definitely only the one god. Christians wanted to link God the Father (the traditional Jewish god of the Old Testament) to God the Son (Jesus), and God the Holy Spirit - and came up with the idea of the Trinity - "3 in one". Many early Christians found this hard to understand - how could one god also be three? And was Jesus really a man, or really a god - or could he be both? In AD 144, a bishop's son, Marcion, came up with one solution - the Jewish god had given way to a new Christian god of love, who had swept away the Old Testament and its old ideas (ie no need at all for "God the Father"). Marcion's rebel church - which had women priests and women bishops was banned, but stayed popular, and influenced Mani.

There were to be many such "heresies" as Christians gradually sorted out what they believed over the next 500 years. But whether heretical or not, Christianity's popularity was growing; not just in the Roman empire, but in the lands of the east bordering on Persian territory.

St Augustine of Hippo (AD 354 - 430) started out as a Manichaean. He became one of the most important figures in the development of Christian ideas. Certain Christian Catholic doctrines seem to derive from Mani via St Augustine, especially original sin and its implications. Sexual guilt and shame at the human body were not part of the original teachings of Jesus. Augustine also fiercely disapproved of his British-born contemporary, Pelagius (AD 354 -?418), who denied there was such a thing as original sin. Terrible. If there's no sin, then why would anyone need to give money to the church to expiate it?

Only the Church of the East really seems to have escaped the baleful influence of Mani and Augustine.