The ancient world had no concept of "the Silk Road" - the term was coined by a German geographer in 1887, who was actually trying to map the best route for a railway line across China. Equally there's no doubt that goods and ideas travelled in ancient times by various routes across Asia, creating links between civilisations in India, China and Iran. But few ever travelled the whole way: we should not imagine huge caravans of camels crossing the mountains and deserts, nor any kind of paved road. It meandered along largely unmarked trails which converged at the main oasis towns. There is plenty of evidence that travellers were infrequent and not necessarily concerned with commerce, and trade was mainly local and small scale.

Gaziantep, Eastern Turkey. A modern evocation of the "Silk Road" on the central reservation. Photo AMW

Setting aside the romance, what actual evidence is there for life along the "Silk Road"? 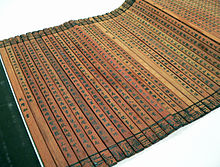 During the Han dynasty, China's power gradually extended into Central Asia, as shown by thousands of documents, not on paper (it had been invented but was still used only as a wrapping material) but on thin slivers of wood. By 100 BC they had reached Dunhuang - and the route from the capital at Chang'an ( Xi'an) was protected by soldiers with bases at regular intervals. The documents include letters between officials, records of purchases of clothes and grain from the locals, notices of new edicts from the emperor. Passes were issued to all travellers. One set of wooden slivers records a case involving Sogdian traders who think they've been conned - being paid the rate for low-quality camels when they'd actually provided top class fat white ones. The documents also record delegations who travelled along the road to see the emperor: some were huge, some were quite modest in scale - and included visitors from the west: possibly even one from Rome.

What was a document written in an Indian script doing thousands of miles away in China? From this and other documents - mostly written on wood - from the 2nd century AD onwards, we discover a community of immigrants from Gandhara living peacefully among the locals, getting married to them, and working as scribes, teaching their Chinese hosts how to write on wooden panels, and explaining the teachings of the Buddha to them. 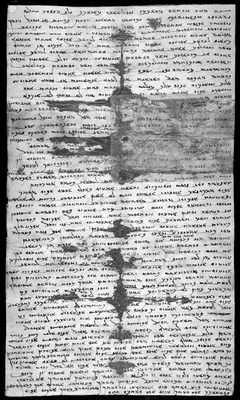 One of the letters sent by a Sogdian living in China

In 1907, near Dunhuang on the western edge of China, the Hungarian archaeologist, explorer and scholar Aurel Stein found an abandoned post bag containing letters written in the Sogdian language - eight rolls of neatly folded paper. The letters date from the 4th century AD, and all came from different towns in China - but all are on similar sized sheets of paper (writing paper being a Central Asian invention gradually spreading westwards). Four have been translated into English by Nicholas Sims-Williams, and can be read here.

From the letters we can work out:

Many Sogdians settled in Turfan - documents (preserved in the desert conditions) show them as farmers, hotel-keepers and vets, and many more went as refugees to China after the Muslim conquest in AD 712 (as Yazdegird III, the last king of kings had done). 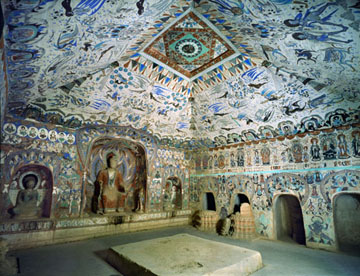 One of the Dunhuang caves

Dunhuang is where the Silk Road leaves China, and divides into northern and southern routes around the inhospitable Taklamakan desert. It was established as a garrison town in 111 BC, to help protect China against the Xiongnu. From the 4th century AD until the 14th it became a centre for Chinese followers of Buddha, whose philosophy began to reach China in the 2nd century AD from India (where Buddhism began, around the 5th century BC).

Eventually about 500 caves around Dunhuang had been dug out and were being used by Buddhists as centres for prayer,meditation, and as monasteries. Visitors (the Chinese emperor, clergy, local and foreign dignitaries, merchants, soldiers, tourists) donated money to maintain the community and its work.

Eventually many were abandoned, and blocked up. In 1900, a local monk, Wang, discovered what became known as the "Library Cave" - a treasure trove of maybe 50,000 manuscripts in over 20 different languages and numerous scripts. After the British archaeologist Aurel Stein bought a large number (for the bargain price of £130) expeditions began to converge from all sides - France, Russia, Germany, Japan. All made off with their share of manuscripts for their national museums (where they still are today). There were even some left for Beijing when the Chinese realised what was being lost.

The "Caves of a thousand Buddhas" are now a World Heritage site. An international project is under way to collect, catalogue, digitise and publish as many manuscripts as possible: see here for up-to-date information. Among the manuscripts are: the world's first printed book, early books on astronomy, the rules of the game Go, and scriptures - not only Buddhist, but also Zoroastrian, Manichaean and Christian. There are also paintings, sculpture and works of art of all kinds. Along with the manuscripts they provide a fascinating window on life in one on the major towns on the Silk Road. 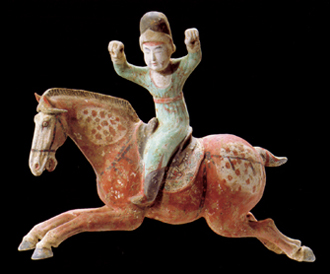 Evidence: the end of the road: Chang'an (now Xi'an)

Tombs in Xi'an dating from the Tang dynasty show Iranians still practising the Zoroastrian religion, where bones were buried after the corpse had been "cleaned up" by vultures and other scavengers. Some Sogdians, though, chose to be buried according to Chinese customs.

The Silk Road has long been blamed for the transmission of the Black Death (bubonic plague) which reached Europe in 1347. The evidence connecting Yersinia pestis to the Silk Road is circumstantial - recently research has revealed that four types of intestinal parasitic worms did indeed travel the route from China to the west. 2000 year old "personal hygiene sticks" from the latrine of a relay station at Xuanquanzhi have revealed eggs of the Chinese Liver Fluke - endemic 1000 miles to the east. This discovery makes it likely that other diseases could have travelled that way.

RETURN TO THE SELEUCIDS OR THE PARTHIANS

Thought now to have been a much lower-key affair than previously supposed in the romantic imagination of the west. The Chinese end was garrisoned for military purposes - and the prosperity of those living along it fluctuated according to the current scale of Chinese commitment. From Dunhuang to the west, such trade as existed was local and small-scale. There is little evidence for travellers completing the entire route: goods would have been taken from one town to the next by local pedlars. Chinese silk (originally produced by a secret process known only in China) was used as a currency before coined money appeared - but much of the trade continued to be barter.

The most important item to reach the west along the route was not silk (a luxury for the wealthy few) but paper - which, by replacing leather and expensive Egyptian papyrus, revolutionised education and business. The Chinese had invented a coarse form of paper, useful for wrapping and packaging, made from overly absorbent mulberry or bamboo fibres. The high end paper usable for writing was made in Central Asia, using cotton rags. This was the "high-end" product that spread to the west.

The Iranian Sogdians were the essential middle-men of the silk road.

The main routes and towns on the Silk Road. Click to enlarge.

was Ferdinand von Richthofen (uncle of the "Red Baron")

There's very little evidence for direct contact between China and Rome before the Byzantine period (c AD 530). No Roman coins before that date have been found in China - and the silk that Pliny (AD 23 - 79) complains about ("Roman ladies flaunting themselves in transparent dresses") may well have come from the Greek island of Cos: no traces of Chinese silk have been found.

Languages in the Dunhuang manuscripts

include Turkic, Korean, Tibetan, Sanskrit, Khotanese, Mongolian, Syriac, Tocharian - and, as one would expect, Persian, Parthian and Sogdian.