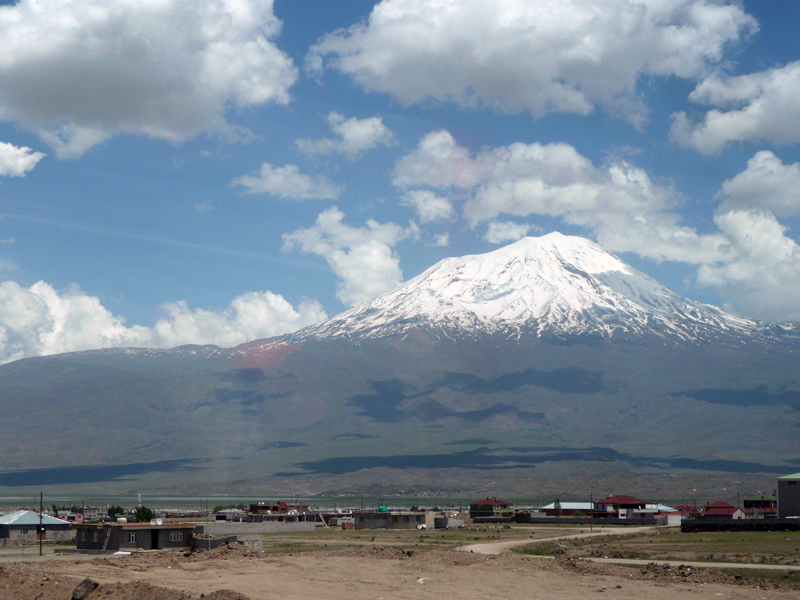 Urartu seems to have been a geographical term used by the Assyrians to describe the highlands later known as Armenia - between the Caucasus and Mesopotamia: it is probably connected with the Biblical Ararat, the highest mountain in the area (5,137 m). The people called themselves Bianili, probably the origin of the Armenian "Van". The name "Armenia" was first used by Darius (in the inscription at Bisitun) - in the Old Persian version (it's called Urartu in the Babylonian). 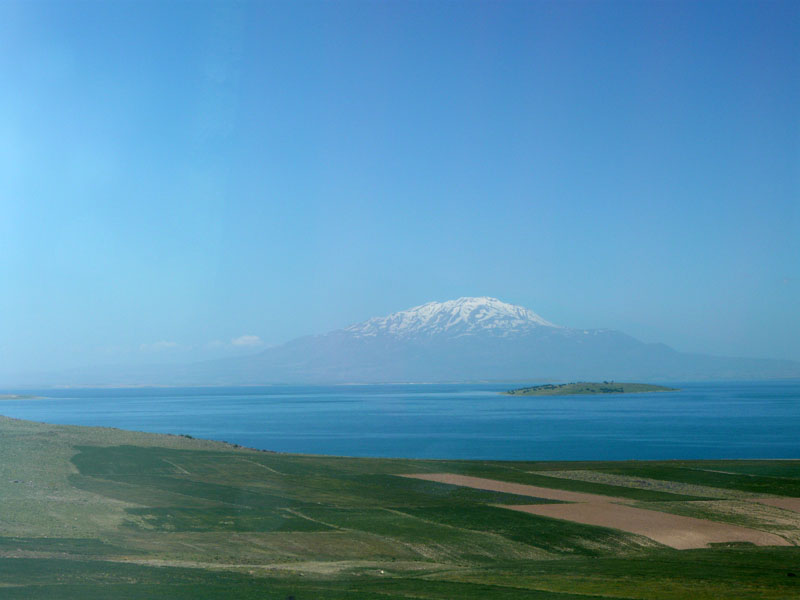 Lake Van: view across the lake from the north-west. The mountain is Mount Suphan, like Ararat, an extinct volcano. Photo AMW

Several hundred inscriptions in the Urartian language have been found: it is not related to Armenian, which is Indo-European. It's not obvious therefore, if the Armenian people are the descendants of the Urartians (if so the language of the inscriptions was not the language of the population, but confined to a literate ruling elite). Another possibility (not popular among Armenians) is that the Armenians originated further west - in Phrygia perhaps - and moved into the vacuum left by the fall of Urartu in the 7th century BC. Herodotus records the tradition that the Phrygians were from the Balkans originally - neighbours of the Macedonians. They crossed into Asia and colonised Armenia:

The Armenians [in Xerxes' army] were dressed and equipped just as the Phrygians were, since they were colonists of the Phrygians.

The story of the discovery of Urartu is in itself fascinating - inspired as it was by the story of Semiramis, legendary Babylonian queen, whose pursuit of Ara the Beautiful, the one man who dared spurn her advances, led her to invade his land of Armenia, and found the city of Van. A French antiquarian society was inspired by this tale to send, in 1827, a young professor to investigate. Young Schultz found - and copied - inscriptions in an unknown language, and discovered a bilingual stele (Kelashin Stele: below) on the Iraq/Persian border, which would have held the clue to its decipherment. Alas, poor Schultz was murdered before he could properly transcribe this vital evidence: and owing to its inaccessibility it remained uncopied until 1976, when an Italian expedition (with full military protection) finally managed to do so. This picture showing Kurdish Peshmerga fighters recently posing by it may help to explain why scholars lost out for so long. More here. 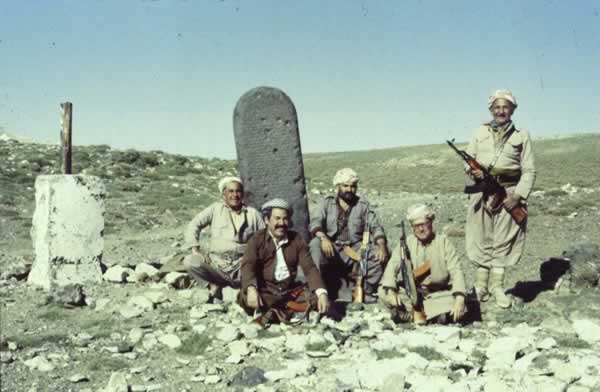 The Urartians held on to their kingdom for around 250 years, facing and withstanding pressure from the ruthless Assyrians to the south of them, and the Cimmerians and Scythians to the north. They used cuneiform script, in their own language, for the bombastic inscriptions recording their triumphs, just as the even more bombastic Assyrians did. And, like the Assyrians, their civilisation seems to have collapsed when confronted by the brief hegemony of the Medes. They were energetic builders - of temples to their gods, of canals and aqueducts, and especially of fortresses. 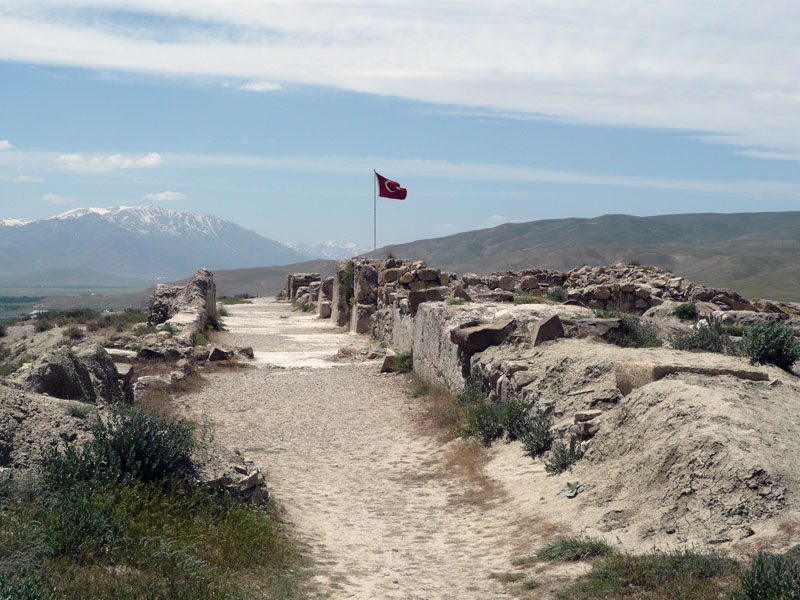 Cavustepe: an Urartian fortress built by Sarduri II. The fortress encloses a palace, a temple of Khaldi, as well as a harem, kitchen, cisterns and even a lavatory. Photo AMW 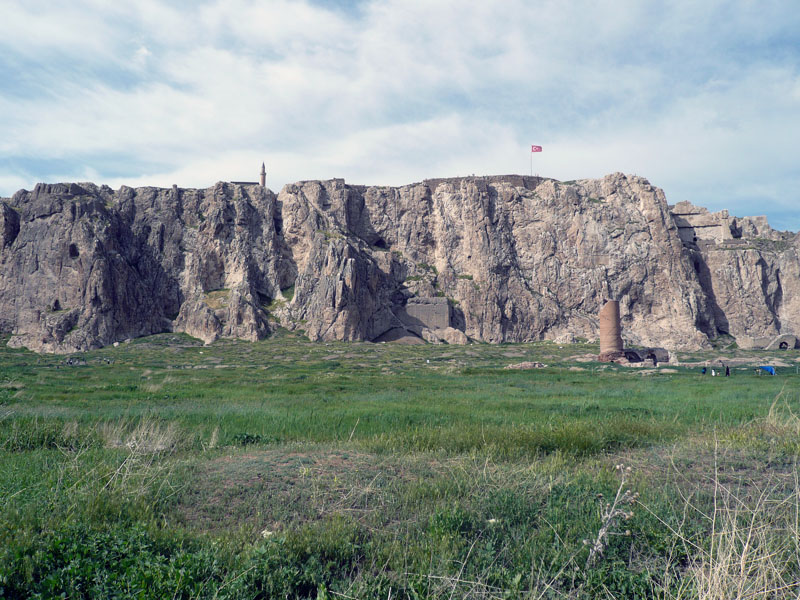 The Urartian capital - the citadel of Tushpa (Van). Photo AMW 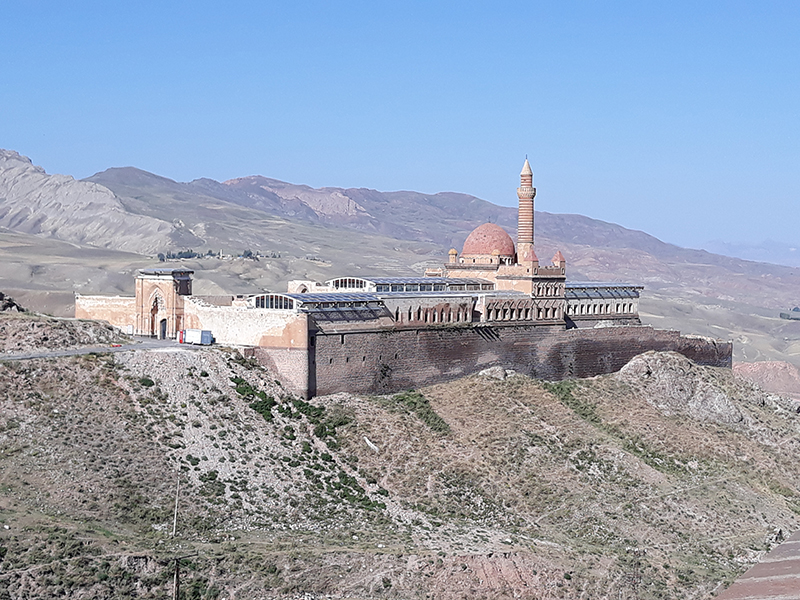 The 18th century palace of Ottoman governor Ishak Pasha above Dogubayazit, eastern Turkey near the Iranian border. Built on the site of an Urartian fortress of 9th century BC- whose foundations were used as dungeons by the Pashas. It was intended to guard the Silk Route, but was repeated captured by Russians in the 19th century.

For 250 years an energetic people ruled a kingdom centred on Lake Van, now in Eastern Turkey, but an important part of what later became ancient Armenia. They left written records revealing a language with no obvious relatives, and fought off Assyrians and other invaders.

The Kingdom of Van: Urartu

The royal dynasty of Urartu: