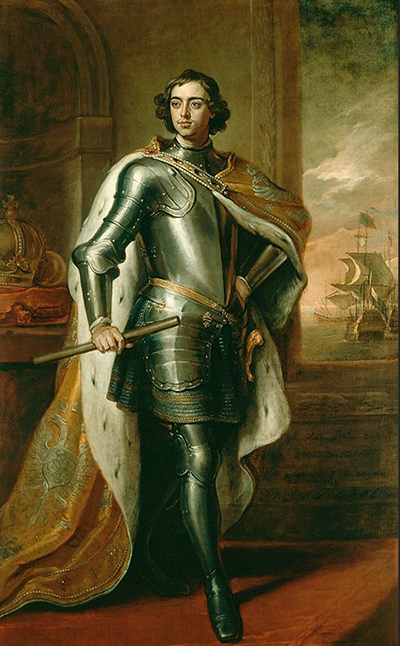 After the abdication of Sultan Husain, Mahmud could claim to be the new shah - but he controlled very little of the former Safavid territory. The Ottomans had taken the opportunity to fight their way into western Persia (provinces of Tabriz - shaken recently by a terrible earthquake which killed 80,000 people - Kermanshah and Hamadan); The Russians, under Peter the Great, to stop further Ottoman encroachment, had already grabbed the southern shore of the Caspian. Soon Qandahar became independent again. Mahmud imprisoned all the Safavid princes he could find, but this merely encouraged numerous genuine or fake family members to stake a claim to the Safavid inheritance (at least 18 under the Afghans, and a further 12 under Nader Shah). One at least, though, was genuine - the feeblest of Husain's three sons, Tahmasp Mirza , who'd escaped from the siege of Isfahan.

After a humiliating rebellion in Qazvin (recently taken from Tahmasp), caused by brutal taxation, Mahmud feared a revolt in his capital. To forestall this, he began a reign of terror, massacring leading Persians , then their sons, who were released into the countryside and "hunted like hares and shot down", and even 400 of the Qizilbash guards. The people got the message. He then tried - with mixed success - to assert his authority further. He starved out Shiraz, but, after a defeat at Yazd, in which he was nearly killed, his army was close to mutiny. By now (1725) Mahmud's mental sate was rapidly deteriorating. With two palace guards he butchered all the remaining Safavids in Isfahan (apart from Sultan Husain and two young children). He was soon completely incapable of continuing as shah (horrific descriptions by European residents of his mental and physical condition exist). Ashraf, long an enemy, marched from Qandahar - and shortly afterwards Mahmud died or was murdered.

He was succeeded by his cousin (or nephew?) Ashraf. Ashraf's only deed of note was to behead the former shah, Sultan Husain, despite promises made - after he was insultingly told by the Ottomans (currently occupying Persian territory) to restore the rightful ruler. He was a good commander, but was outnumbered, outclassed and defeated by Nader Quli at the Battle of Damghan in 1729 - he abandoned Isfahan and retreated to Shiraz. When Shiraz fell, he escaped again. He fought on but was soon killed. In 1738, with help from the Abdali, Nader defeated Husain Hotak, and eliminated the Hotakid dynasty from Qandahar: today the Ghilzai (or Ghilji) tribe still has its base where it ended up in southern Afghanistan.

The 18-year-old Safavid prince Tahmasp Mirza had escaped from the siege of Isfahan - and, fled to the northwest, proclaiming himself shah. His base was originally in Azerbaijan, but Mahmud's forces kept him on the move - from Qazvin, to Tabriz, to Ardabil, to Rayy, and eventually to Mazandaran, where he won support from the Qajar Türkmen. He nominally reigned for ten years (1722 - 1732), but was hounded by the Afghans, and also under pressure from Russians and Ottomans - who, though sympathetic to his desire for recognition, failed to acknowledge him fully as shah. But by 1726 he had won the support of a charismatic and ruthless young warlord, from the Afshar clan of the Qizilbash, who had killed and replaced Fath Ali Khan Qajar, (from the Qajar clan), as his vizier. Nader, mimicking Timur, had been winning power in Khorasan, using similar methods to his hero. Together they took Mashhad, the chief city of Khorasan. His name was Nader Quli Afshar, to which was now added Tahmasp Quli ("the slave of Tahmasp"). He was a brilliant general - and soon had Turks and Afghans on the run. In 1730 he deposed Ashraf - and the brief, but detested, reign of the Afghan dynasty was over. He restored Tahmasp II to rule Isfahan, but soon realised supporting Tahmasp was a waste of time: Tahmasp, like most of his family, was an incompetent lazy drunkard. He dethroned him, and decided to rule himself. But the Safavid prestige - despite all recent history - led him to nominate Tahmasp's 18-month-old as Shah Abbas III. In 1736, he felt strong enough to depose him, too, and became Nader Shah. A few years later Abbas III and his father were executed. But this was not quite the end of the Safavid family - though its rule was well and truly finished. 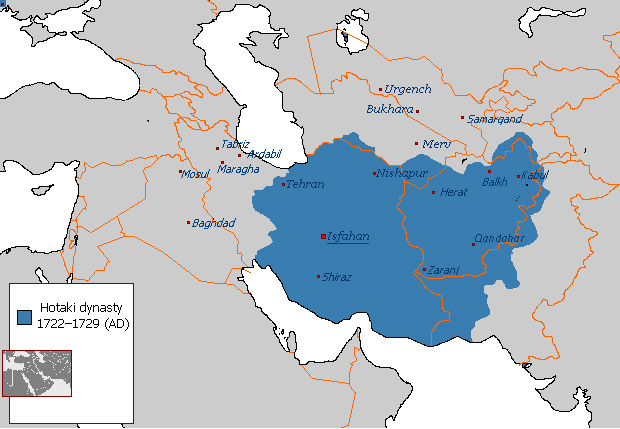 Map of the Hotakid dynasty's territory - all frontiers were under threat, from Ottomans in the west, Russians and Uzbeks to the north, and Mughals to the east.

The Jesuit Father Krusinski was in Isfahan during the reigns of Husain and Mahmud: in appearance they were similar - both stocky and un-regal looking, but while Husain was feeble, pious and drunken, Mahmud "exercised himself every morning in wrestling with his toughest officers. Five sheep with their legs tied were brought to him each day, for him to practice slicing them apart with his sabre ... very sober ... never slept with any woman except his wife, Husain's daughter."

Taking advantage of the Safavid decline, Peter the Great launched the Russo-Persian War of 1722-1723, otherwise known as "The Persian Expedition of Peter the Great", with the double motive of increasing Russian influence in the Caucasus and Caspian Sea region, and preempting the Ottoman Empire from doing the same. After the capture of many provinces and cities in the Caucasus and northern Persia, the Safavids were forced to hand over territory to Russia. However, within twelve years all the territories would be returned to Persia, now led by Nader Shah, as part of the Russo-Persian alliance against the Ottoman Empire, the common enemy.

These two Turkmen tribes had originally moved westward from Central Asia, presumably under pressure from the Mongol invasions, and had settled in Azerbaijan. Abbas I, however, had decided he wanted to make the western frontier less "Turkish". Thousands of Afshars were relocated to Khorasan. while the Qajars (whose time would also come) were transplanted to Mazandaran.