Iran: Afsharids and the Zand

"Scarcely any of the great conquerors of history can have destroyed his life's work quite so completely as Nader Shah did in the months before his death. His unreasonable exactions and and barbarous suppression of the ensuing provincial revolts spread disaffection to every corner of his realm."

Nader's nephew, Ali Quli - possibly behind his uncle's assassination - marched on Khorasan with an army of rebels, and immediately proclaimed himself shah, with the totally inappropriate name of Adil Shah ("The Just"). Hi first act was to send soldiers to kill all Nader Shah's sons and grandsons - even those still in the wombs of their pregnant mothers in the harem. Only one was spared - his mother was a Safavid: he might be needed to claim legitimacy (like his uncle with baby Abbas III). But his uncle's empire was disintegrating fast. 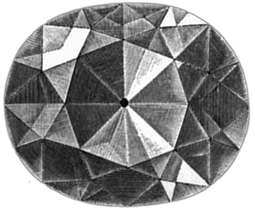 Nader Shah had relied on support from the Abdali Afghans (based in the east of modern Afghanistan, who regarded their Ghilzai rivals as no true Afghans). He had secured the release of their leader, Ahmad Khan Abdali, from prison in Qandahar in 1738, and he been a loyal general ever since. On news of the butchery of his friend's family, he left for Afghanistan - attracting support even from Ghilzai on the way. He took with him much of Nader Shah's treasure (Including the Koh-i Noor diamond [right]), and was proclaimed shah in Qandahar. He became founder of the Durrani dynasty, which by uniting Qandahar, Herat and Kabul, can claim to be the founders of modern Afghanistan. With a subservient Khorasan at his back under Shah Rukh (from 1750), he was free to raid the Mughal empire to the east.

Karim Khan led his troops from the small Zand tribe back to Luristan in the northern Zagros mountains.

The Bakhtiari, from the central and southern Zagros, proclaimed independence under their general Ali Mardan Khan.

Muhammad Hasan Khan Qajar returned to his family's base in Mazandaran, south of the Caspian. Adil Shah marched against him. He withdrew, but his son was captured. Adil had him castrated, but he nevertheless emerged later as the reunifier of Iran - as Shah Agha Muhammad Khan Qajar.

Adil Shah didn't last long. Nor did his brother Ibrahim, who deposed him, and proclaimed himself shah. But already, in Khorasan, Nader Shah's one surviving grandson, Shahrukh, had been chosen as the new shah - greatly assisted by his descent from the Safavid shah Suleyman. In 1750, Shahrukh was briefly deposed by a conspiracy which put their puppet, Sayyid Muhammad on the throne for a few months as Suleyman II - his mother was a daughter of Suleyman I. During this chaotic interlude Shahrukh was blinded, and Ibrahim was executed. Sayyid was removed, blinded, but allowed to live out his life.

Shahrukh returned as shah for nearly half a century and ruled on in Mashhad - but his authority barely extended even to Khorasan - and he was virtually a vassal of Ahmad Khan Durrani in Afghanistan, loyal to Nader Shah's heir, for whom Khorasan was a useful buffer state, allowing him to raid Mughal lands in India. The Durrani dynasty continued to rule Afghanistan under Timur Shah (1773 - 1793) - but went into decline under his grandson Zaman Shah (1793 - 1800). So there was no help from Afghanistan when Agha Muhammad Qajar took Mashhad without a battle in 1796. The wretched Shahrukh was tortured to reveal the last hiding-place of Nader Shah's treasure - and died as he was being taken away in captivity. The Qajars were in charge - of an Iran once more united as a single political entity. But Agha Muhammad Qajar had had to overcome a significant rival in the west to reach this happy position.

The Zand dynasty and rise of the Qajars

None of the later Afsharids had shown the slightest interest in recovering the western half of Nader Shah's empire - not even Isfahan, so recently one of the greatest cities in the world. Into the vacuum came two nomadic peoples from the Zagros - both of whom had fought for - and been victimised by - Nader Shah.

The leader of the Bakhtiari, Ali Mardan Khan, as chief of the larger and more important group of Zagros pastoralists, was the senior in an alliance with Karim Khan, leader of the smaller Zand tribe in Luristan. They took Isfahan, and proclaimed a joint rule, with another puppet Safavid installed as nominal shah, Ismail III (his mother was a daughter of Shah Sultan Husain). 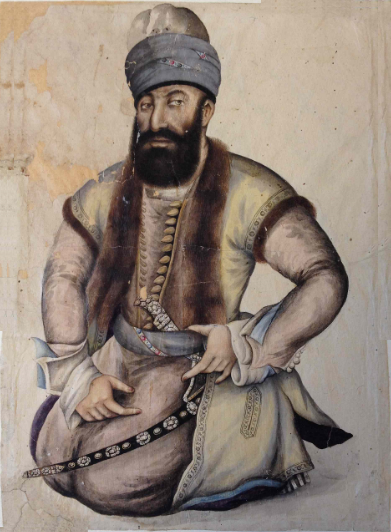 The Bakhtiari and the Zand soon quarrelled - and Karim Khan began a campaign for control of western and central Iran. He defeated Ali Mardan Khan (several times), who was killed in 1754. In 1759 he defeated and killed Muhammad Hasan Khan Qajar in Mazandaran - the Qajars had previously hijacked the talismanic Safavid Ismail III - who now fell into Karim's clutches. He also took Agha Muhammad Qajar as hostage - he was well treated. In 1763 he defeated the Afghan Azad Khan in Azerbaijan, and took back Tabriz. Karim Khan refused to take the title of shah - allowing it to remain with Ismail III, preferring to be called the modern-sounding "people's deputy" (vakil al-ra'ay), even after Ismail died in 1773. He chose Shiraz for his capital - and improved it with many buildings that still stand. His rule is usually seen as an oasis of justice and peace surrounded by violence and mayhem: not entirely true, but not false either (in the context of 18th-19th century Iran!). He re-imposed Shi'i Islam after Nader Shah's failed experiment - though he made no claims of religious connection for himself. After re-uniting western and central Iran, he gave up expensive military campaigning - apart from one venture, which won for him the Gulf port of Basra from the Ottomans. Most unusually for an Iranian ruler, he died peacefully of old age, in 1779. Although the Zand tribe may possibly have Kurdish origins, Karim Khan was seen as the first ethnic Persian or Iranian to rule on the plateau since the BUYIDS.

The Later Zand and the Qajars

Not for the first time in Iranian history, no clear succession had been arranged. The Zand princes began fighting among themselves - and in the confusion Agha Muhammad Qajar escaped. After he had fought with his brothers to establish dominance he drove the Zand forces out of Mazandaran, and proceeded to take first Isfahan (1785) and then Tehran (1786) - which he adopted as his capital - and which has been the capital of Iran ever since. Meanwhile, out of the internecine battles of the surviving Zands, a leader - of sorts - had emerged. Lutf Ali Khan, a promising young great nephew of Karim, took control in Shiraz (1789). When he moved to take Isfahan, Shiraz rebelled, and appealed for help to Agha Muhammad (1791). Lutf Ali could not retake Shiraz, and in 1792, Agha Muhammad marched against him. Lutf Ali lost an opportunity to surprise Agha Muhammad, but was then himself tricked, and forced to flee, to Kerman and then to Bam. In Kerman, Agha Muhammad had the women and children enslaved, and the men blinded - their eyeballs were collected and delivered in baskets, and poured out on to the floor in front of him. In Bam Lutf Ali was captured, gang-raped, blinded, and sent to Tehran to be tortured to death. Lutf Ali, though, is remembered in Persian folklore as a hero/martyr, contrasting with Agha Muhammad, the puny, vengeful, contemptible eunuch. 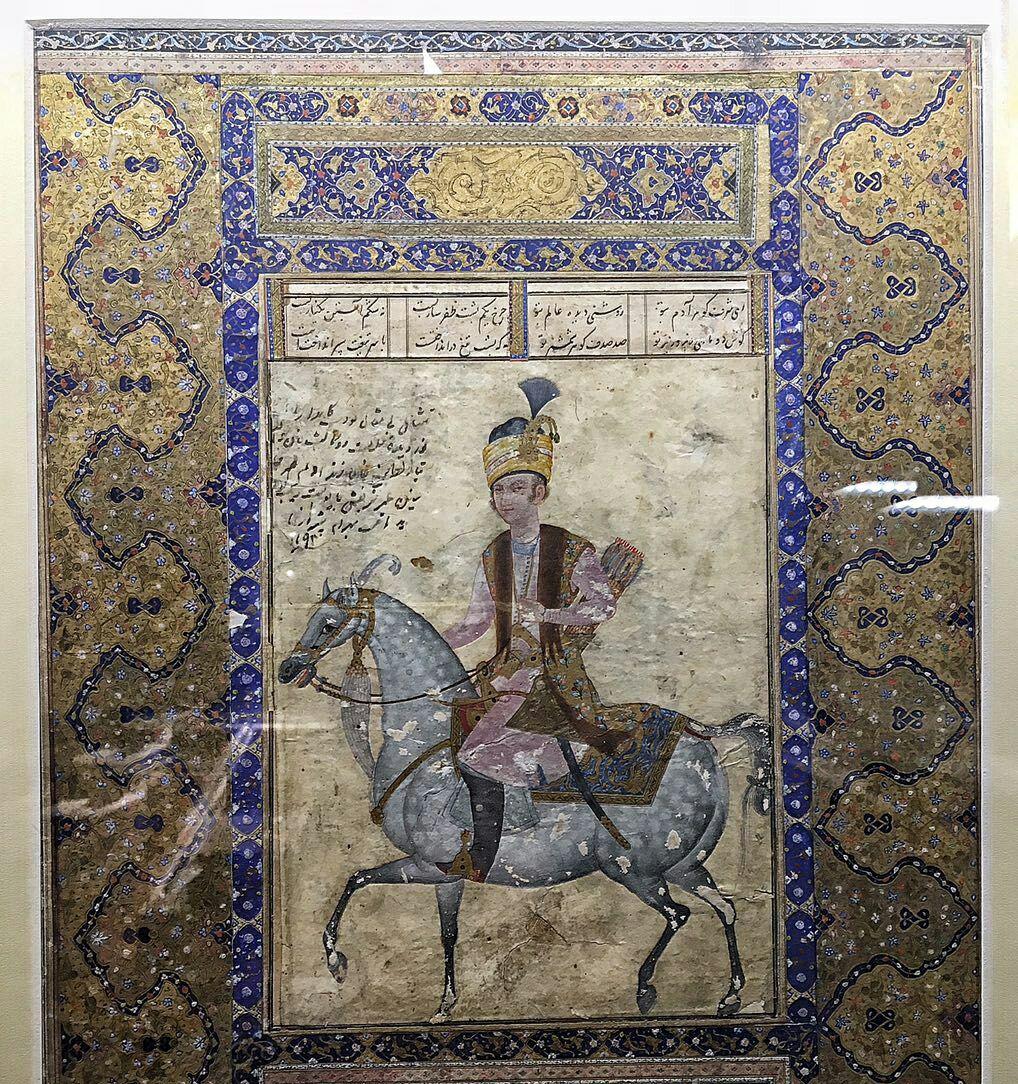 His mission to unite Iran was nearly complete: he next took Georgia (with some difficulty) - massacring thousands, and destroying Tblisi. This was to have consequences: Georgia, which had proclaimed independence under Erekle after the death of Nader Shah, had recently (1783) put itself under Russian protection.

He had himself crowned shah in 1796. Only Khorasan remained - Shahrukh submitted without a fight - but still faced torture from which he died. Agha Muhammad could thus add Nader Shah's jewels to those extracted from Lutf Ali.

So the Qajars finally came to power - Agha Muhammad had fought his way to supremacy over Afsharids and Zands - and finally extinguished the lure of the Safavids, on whom both dynasties had at times depended for a veneer of legitimacy. His extreme nastiness and brutality can partly be explained by his castration aged 5 or 6: he never overcame the anger and bitterness of being robbed of his manhood. He died in 1797 - stabbed by his own servants. He was campaigning in the Caucasus again: he was lucky that the Russians, who now had an interest in the area, were (temporarily) out of the picture: Catherine II (died 1796) was distracted by the French Revolution after 1789, and her successor Paul decided against intervention. Agha Muhammad thought he had a free hand - but he was dead, and the Russians would return.

He had nominated his nephew, Baba Khan, to succeed him. He fought off his rivals and became Fath Ali Shah in May 1796. Historians see the reign of Fath Ali Qajar as marking the end of medieval Iran, and the beginning of the modern period.

NEXT: PERSIA UNITED UNDER THE QAJARS

The first Qajar shah was known as Agha, "the eunuch".

He was captured by his brother, and executed at the wish of Nader Shah's widow - furious for what he did to her sons.

Under the Safavids its population had risen to over half a million - comparable with contemporary London. But, by the end of the Afghan period, only a tenth of that number remained. Most of the city centre was deserted.

Maybe to make the trip safe for Shi'i pilgrims to Najaf and Karbala.

still there Include the Bazaar, the palace citadel complex, his mosque, and the war-damaged tombs of Hafez and Sa'di which he restored.

For pictures of Shiraz go here.

He was not allowed to rest is peace, however. Agha Muhammad had his bones dug up and reburied in his new palace in Tehran (the Golestan) where he could tread over them every day. Fittings from Karim's Shiraz palace were also cannibalised for Golestan.

A "tradition" dating back to the Achaemenids - see, for example the succession of Artaxerxes III. 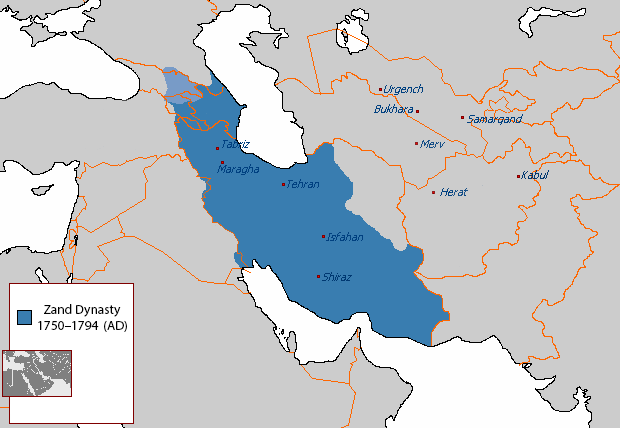 The Zand had been deported by Nader Shah from their homeland in Luristan to Khorasan. After Nader's death, Karim Khan led them home.