Together known as Transcaucasia or the Caucasian lands; Colchis and Iberia were together known as Georgia. Beware: both Albania (not the Balkans) and Iberia (not Spain and Portugal) could be misleading. Most of Albania is now part of Azerbaijan, with some territory in Dagestan, while Iberia and Colchis lie mostly within present-day Georgia.

To the north of Armenia lie three Caucasian states - Colchis to the west, Iberia in the centre and Albania to the east, extending to the Caspian.

The Caucasus hems them in to the north, but also divides them. Colchis tended to look west towards Greece and Rome, while Iberia looked eastwards to Persia. 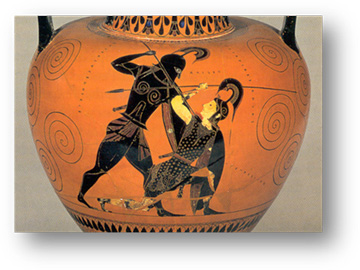 The Caucasus region was the setting for the myth of the Golden Fleece, as well as for the Amazons, the legendary female warrior tribe, and for Prometheus' imprisonment after he stole fire from the gods. Colchis, home of Medea, suggested a land of magic and witchcraft. These stories show how the eastern end of the Black Sea was seen to the Greeks as the furthest edge of the civilised world.

All three states were traditionally Persian vassals - and probably had been so since Achaemenid times, although they remained peripheral until the Seleucid period. The campaigns against Mithridates of Pontus in the 1st century BC attracted Roman interest to the region. The Romans eventually took direct control over the coast of Colchis (1st century AD), and supported local rulers elsewhere.

Iberia played the Romans and Parthians off against each other during the Roman wars with Parthia, with Rome mostly having the edge - owing to cultural ties, and - later (from AD 337) - Christianity. But under the Sasanians Persian influence became more significant, especially following the success in Armenia of Shapur II. Iberia, Janus-like, looked both ways at once. Culturally ties were more with the west, but politically they remained under Persian influence.

By the end of the 4th century AD the threat of invasion had become very real, and the Caucasus grew more important strategically. The Romans did not challenge Sasanian rule, but made agreements with the Sasanians to share the expense of defending the passes through the mountains. This arrangement was not always kept to.

Colchis became Lazica, which in the 5th century AD began moving from the Roman to the Persian sphere - and a difficult war was fought there by Justinian.

Albania became a Sasanian vassal in AD 252. Its king adopted Christianity in the 4th century - and it became nominally Muslim after the Arab conquest in the 7th century, despite resistance by the Christian king Javanshir. But as the authority of the Abbasids weakened, it fragmented under numerous local dynasties until it was conquered by the Seljuqs in 1067. Once again Trancaucasia became nominally a vassal - but Persian culture flourished under the Eldiguzid dynasty. The Shirvanshahs - who became vassals of Timur - ruled locally from 861 until 1501, when they were subdued by the Safavids, but allowed to remain in power until 1538, when Tahmasp I turned the area into the province of Shirvan. It stayed under Iran's rule despite briefly falling to Ottomans and Russians until 1804. The Russians then invaded in force and defeated the Persians. The border was defined in 1828 at the Treaty of Turkmanchai, and Russia occupied the northern Caucasus until the fall of the Soviet Union.

The strategic lands north of Armenia reaching deep into the Caucasus. Communication was always hard, but the passes were of vital importance in deterring invasion from the north. Iberia and Colchis can be referred to jointly as Georgia.

These had included the Iranian Alans around AD 75, and later the Hephthalite Huns in the 4th century AD.