Alexander of Macedon: an assessment

What did he want?

There's a story about when Alexander was in Greece, before he set out on his campaign of world-domination. The young king has gone to see the most famous philosopher in the world, at home in his wooden barrel:

Diogenes, being a Cynic, was even more frank when Alexander asked him if there was anything he needed. "Yes, for you to move over. You're blocking the sunlight."

Alexander is said to have replied "If I were not Alexander, I would like to be Diogenes." 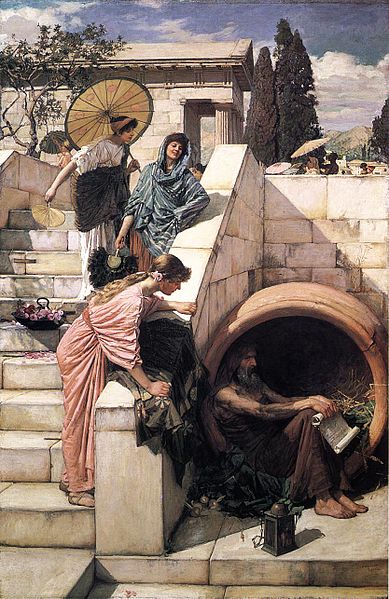 Diogenes and visitors by the Victorian painter John Waterhouse

Some have seen Alexander as some kind of idealist - a visionary, who foresaw a world without frontiers, and without racial distinctions, trying to unite east and west in one globalised super-state.

I think that Alexander was indeed close to Diogenes - he had no plan, no coherent vision, he just did what he needed to do at every stage in his life. He was ruthless in dealing with enemies (eg Thebes, Parmenio), he understood the value of gestures (his sacrifice at Troy, the visit to Siwa, the marriage to Stateira, burning of Persepolis), but was in all things pragmatic and totally selfish: what is the best thing for Alexander? 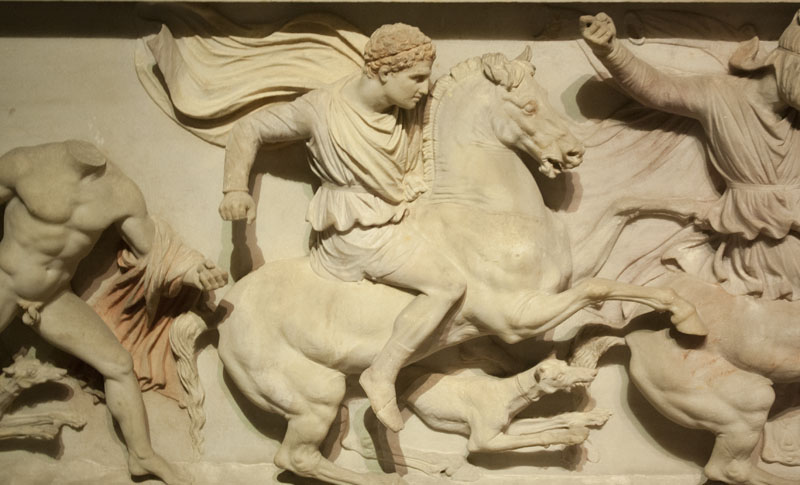 Alexander relaxes on a hunting trip, from the so-called Alexander Sarcophagus in the Archaeological Museum, Istanbul. Photo AMW

Consequently he left an empire without organisation, with no administrative machinery (the PFA survives because the tower where it was stored collapsed during the burning of Persepolis), and no successor.

His unexpected death had interrupted plans - not for consolidation - but further conquest (certainly Arabia and as some believed Carthage). His policy of founding Alexandrias everywhere he went (the one in Egypt being the first of at least 15) was probably partly to do with dumping tired and exhausted Macedonians who were no longer useful to him, and partly a vanity project. His policy of "becoming an Achaemenid" - adopting Persian royal dress, marrying Persian princesses, not discouraging people from worshipping him, and insisting on proskynesis - was unpopular with his Macedonians, but he needed to win over the Persian leadership, and in fact they seem to have had no trouble (in Persis at any rate) of accepting him as the successor to Darius III. But he did something to upset the followers of Ahura Mazda - in later Zoroastrian writings, Alexander appears as an embodiment of evil, second only to Ahriman.

How much was he supported by the Greeks?

There were two attitudes:

In the event there was not much Greek involvement anyway - only 7,000 men out of 42,000 and the Athenian fleet. It was certainly not a "crusade". And there were Greek mercenaries and their generals fighting with Darius, thousands of whom were massacred by Alexander after the Battle of Granicus. Alexander's force was overwhelmingly Macedonian rather than Greek.

Why did he succeed?

The Persian empire was not, as is often stated, ready to collapse like a house of cards. Internal problems had been largely fixed by Artaxerxes III. Darius III underestimated the the threat from a ruthless and driven conqueror - and made serious mistakes in tactics and strategy in all three battles. 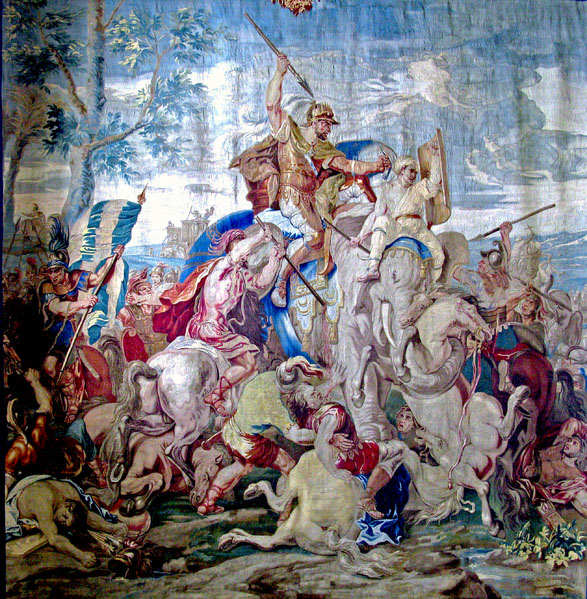 A fanciful picture of the Battle of Gaugamela on a Flemish tapestry from the 18th century.

WHAT HAPPENED TO THE PERSIAN EMPIRE?

Assessment of Alexander - his policies, his legacy.

Told by the Roman politician Cicero (around 45 BC) and by others. The Cynic school of philosophers, founded by Diogenes (c400- 325 BC) named themselves after the Greek word for dog. Cynic means "dog-like". They admired dogs (these would not be pets, of course, but semi-wild scavengers.) because they don't obey rules - they follow their nature, and just do whatever they need to do.

"When the Persians meet one another in the street, you can tell if those meeting are of equal status. For instead of greeting by words, they kiss each other on the mouth; but if one of them is inferior to the other, they kiss one another on the cheeks, and if one is of much less noble rank than the other, he falls down before him and worships him."

A ruthless and driven conqueror

Darius offered to make peace three times on very favourable terms. The third time was after Gaugamela, where he offered to recognise the Euphrates as the western boundary of the Persian empire, to give Alexander 30,000 talents, and his daughter in marriage.