The end of the Urartian empire was sudden - but what happened is unclear. Perhaps it was finally overwhelmed by the Medes, or even the resurgent Assyrians. But within a few years it fell to Cyrus: marking the beginning of Persian involvement in Armenia. There's some evidence that the Achaemenids were influenced by Urartu - for example, the title "king of kings" used by Darius at Bisitun is an Urartian formula, not much found in Mesopotamia. On the Bisitun inscription, the territory is now known for the first time as "Armeniya". The Urartian dynasty was replaced by the Armenian Orontids, who are presumed to have been of Iranian origin.

Armenians were part of Cyrus' invasion forces against Lydia and Babylon, but the Armenians were also one of the nations that rebelled against Darius when he first came to power. They were defeated and became a satrapy of the Persian empire (Armeniya), contributing 400 talents and 20,000 foals annually. Armenians were part of Xerxes' forces invading Greece in 480 BC, and also fought against Alexander. Under the Seleucids, the kingdom of Armenia was allowed virtual independence.

The Kingdom of Armenia from 321 BC

When the Romans defeated Antiochus III at Magnesia in 190 BC, Armenia began to consolidate and extend its power under king Artaxias (190 - 159 BC), replacing the Orontid rulers (although Artaxias could still have been a member of the family).

Under Tigranes the Great (95 - 55 BC), Armenia looked as if it might eclipse Parthia as the dominant power in the east...

The Artaxiad dynasty ruled Armenia as it oscillated between Parsia and Rome until the Parthian king Valaksh I (Vologeses) appointed his brother Tirdat (Tiradates) to the throne. His Arsacid dynasty ruled in Armenia until the 4th century AD.

Armenia under the Parthians: relations with Rome.

Tigranes the Great 88 BC

Armenia during the Sasanian period

Khusrau I provokes confrontation with Byzantium in Armenia AD 565

"An Eastern Christian society that was creative, enduring, and at many times, gloriously idiosyncratic". Armenia's king Tirdat III (Tiridates) preempted Constantine by several years in becoming the first Christian king in AD 301. But native traditions were not obliterated by the small Christian elite. A distinctive Armenian Christianity eventually evolved, nourished by the clash and cross-fertilisation of a nation of warlords and saints, literary scholarship and loyalty to ancient beliefs. It looked mostly to Rome politically, but looked to Iran for its culture and social structures - especially the Parthian and Sasanian delight in hunting, feasting and war. Its bards constantly fostered a nostalgia for the old pre-Christian ways. King Trdat himself, embodied this dichotomy: he appears in art as a boar-headed man (the result of a curse by Gregory the Illuminator), a primitive beast, tamed by Christianity.

The Armenian script was invented in AD 405, and manuscripts on Christian and pagan themes proliferated. The tension came to a climax in AD 451 at the Battle of Avarayr, when the the Sasanian Yazdegird II forced a return to Zoroastrianism. It was long remembered as one of the most significant events in Armenian history, seen by Christians as a simple battle between good and evil; but it also very much symbolised Armenian reluctance to shake off its Iranian past.

Armenians remained a proud mountain people - famous for exporting warriors to east and west, but producing intellectuals too. After the re-capture of Jerusalem by Heraclius and his crushing defeat of the Sasanians, the Armenian nobility, who'd been loyal allies, were poised to make Armenia an international centre of Christianity.

For the next two centuries or so, however, following the arrival of the Arabs and Islam (in AD 639 - they were forced to recognise the Caliph in 652 ) Armenia was an unhappy place -subject to invasion, terror and massacres from not only the Arabs in their attempts to subdue the Armenian people, but also from Constantinople - the Byzantine emperors objected strongly to the Armenians' independent form of Christianity.

But in 859, the Armenians were reluctantly given autonomy by Caliph al-Mutawakkil - the Arabs were faced with serious trouble from the Byzantines and could not sustain conflict on two fronts. Ashot Bagratuni was appointed "Prince of Armenia". An ancestor of his had helped the Abbasid caliph al-Mutasim suppress the revolt of Babak in Azerbaijan, and been rewarded with a governorship. Al-Mutawakkil removed him, and imprisoned him in Baghdad - actions which stimulated an Armenian rebellion, led by Ashot. As problems with Byzantium persisted, during the "Decade of Anarchy" following the death of al-Mutawakkil in 862, al-Mutamid delivered complete independence to Armenia - an independence that was also soon recognised by the Byzantines, and Ashot became first king of the Bagratid dynasty. In AD 971, Ashot III transferred his capital from Kars to Ani, which soon became the most important city in the region. By the 11th century, it had a population of over 100,000. It was known as the city of 1001 churches. Quarrels within the Bagratid family led to a surrender of the city to Byzantium. 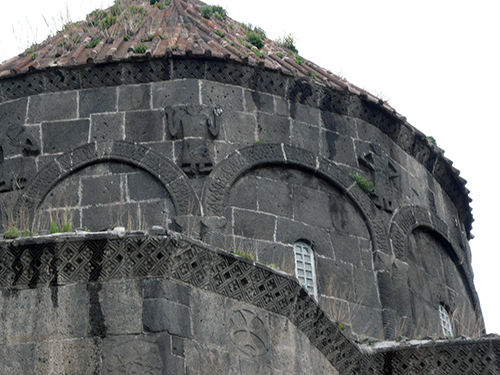 10th century church at Kars built by the Bagratids. It's now a mosque again, after periods as a church, a museum, and plain neglect.

The Arab conquests had ensured that Armenia, though now independent, remained in isolation, an isolation which was brutally increased as a result of the Seljuqs' move westward, culminating in the Battle of Manzikert in AD 1071. Subsequently many Armenian nobles migrated to Cilicia, and established a kingdom in the style of contemporary Europe (the Crusaders were simultaneously arriving in Syrian and the eastern Mediterranean) - a warrior elite in its castles dominating a feudal society. 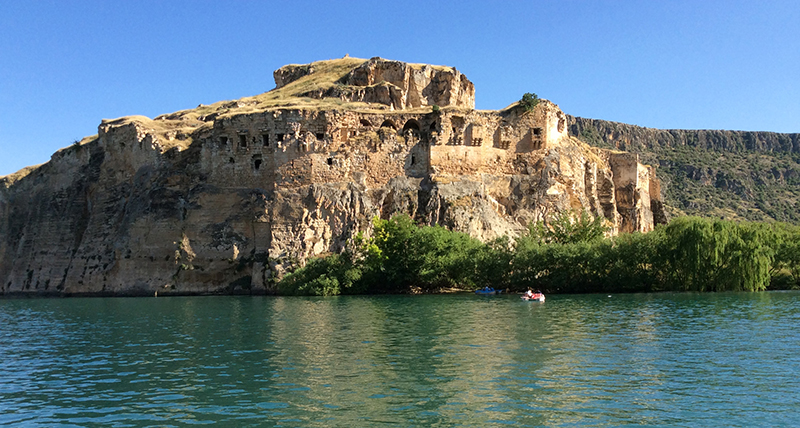 Rumkale (="Roman Castle") on the Euphrates west of Sanliurfa. The strategic site was fortified first by Assyrians - and later by Greeks and Romans. It was a major stronghold of the Armenians in Cilicia, until it fell to the Mamluks in 1293. Today its surrounded by the rising waters of the Birecik dam. Photo AMW

The Mongol invasions which brought control and stability to the Silk Route brought profit to Armenian Cilicia: the port of Ayas, near Adana (now Yumurtalik) where the Silk Route terminated became a major trading hub.

Armenia was the scene of invasion and counter-invasion during the Early Modern era, leading to a partition: Western Armenia became Ottoman, Eastern Armenia was ruled by the Safavids and their successors. As part of a Safavid "scorched earth" policy to secure his western frontier, many Armenians were forcibly resettled in Iran. In 1605, Shah Abbas I transported Armenian silk merchants to Isfahan, soon a flourishing Iranian silk industry was producing 2000 pounds of silk annually and exporting to Venice and the rest of Europe: as seen in the paintings of Titian, Van Dyck and Tiepolo.

Eastern Armenia was permanently ceded to Russia in the 19th century by the Qajars: Western Armenia remained under the Ottomans. As Christians, their demand for more rights from the Muslim rulers led to state-sponsored massacres between 1864 and 1866 - forerunners of massacres under the Young Turks, and ultimately the Armenian Genocide of 1915 - 17.

Gregory was of noble or maybe royal Parthian descent. His father, incited by the Sasanian king Ardashir I and his son Shapur. murdered the Armenian Arsacid ruler: he and all his family were killed in revenge, except Gregory who escaped to Cappadocia and was brought up as a Christian. He returned to Armenia, to expiate his father's crime by preaching there, but was imprisoned by Trdat III. He was eventually released to cure the king's insanity: he baptized him and was charged with converting the nation to Christianity.