Great king still, until 465 BC

How serious was Xerxes' failure to take Greece?

With the defeat of his navy at Mykale in 479 BC, Xerxes' Greek adventure was over. He'd used a sledgehammer, but failed to crack the nut. What went wrong?

Actually not so much. Thermopylae was a success (he'd have won eventually even without the local Greek's treachery). Salamis was not a disaster, although his fleet had been severely weakened by the storm just before. And even so two thirds of it survived the battle. Xerxes made it worse, though, by executing his Phoenician admiral, causing the crucial Phoenician and Egyptian contingents to desert. When he then left Mardonius in charge of the land forces, he must have assumed that victory for the huge army next season was a certainty. If Mardonius had not foolishly led the Persian attack in person and been killed, their overwhelming superiority in numbers would surely have led to a victory.

Greek unity was always precarious - but it lasted long enough to ensure the decisive win at Plataea. Persian unity depended on a strong leader. Their army, remember, consisted of many different peoples with different weapons, languages and experience, including of course a lot of Greeks from Thessaly, Macedonia, Ionia and elsewhere, whose loyalty was always suspect. And most of the army, of course, never saw any fighting. Were Xerxes and Mardonius strong enough? How did they compare with Cyrus and Darius?

Xerxes' continues: the next 14 years.

We obviously don't know Xerxes felt about what happened. From the few known facts, we can guess that Xerxes' new strategy was to use Artabazus' approach: win over the Greeks by more subtle methods. This policy was surprisingly successful: he installed Artabazus as satrap of Phrygia, and he lured the two most successful Greek generals in the recent war to settle in Persian territory. These were king Pausanias, the Spartan commander at Plataea, and Themistocles of Athens, the brains behind the Greek victory at Salamis. Quite a few Greeks saw advantages in cooperating with Persia. And increasingly Persia would be buying influence in Greece: the important thing was to keep the Greeks occupied with their own quarrels, and distract them from interfering with Persian interests in the west.

The Greeks tried to preserve their unity: the Delian League was formed to liberate the Greek communities still under Persian rule. Under the leadership of Athens, it largely achieved its objectives. After success on land and sea at the Battle of Eurymedon (probably in 466 BC), the Greeks could assume that there was no longer any danger of a Persian invasion. But the Persians could afford to wait until the Greeks started turning their hostility against each other (as they had always done up until Plataea). In fact it began the very next year; Naxos, an important member of the Delian League, decided it didn't need to belong any more. The Athenians had other ideas, and forced them to stay. 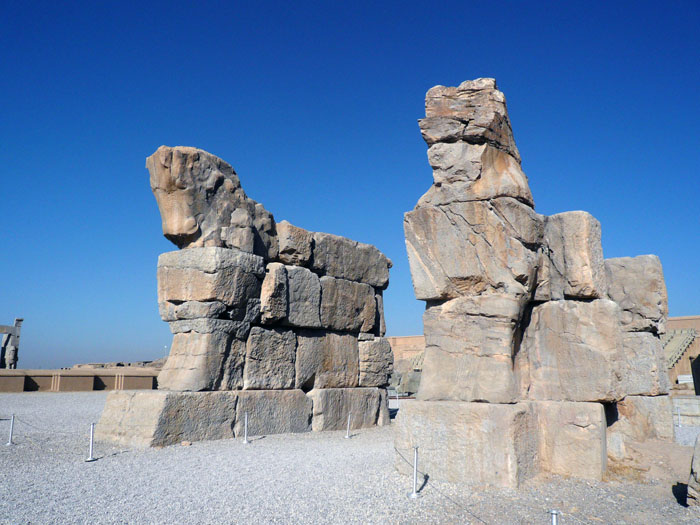 The Gate of All Lands, Persepolis. Photo AMW

Xerxes meanwhile was supervising building projects at Susa and Persepolis, including a huge new palace for himself within the complex. An inscription on the entrance gate says:

Xerxes' dies and his son Artaxerxes becomes king (465 BC)

In 465 BC Xerxes was assassinated in his palace bedroom by Artabanus, the commander of the guard, his most powerful courtier. Details are obscure - he seems to have intended to replace the Achaemenids with his own family - his sons were also in on it. But he managed to convince Xerxes' son Artaxerxes that his elder brother Darius was responsible. Artaxerxes had Darius killed and became king. Then Artabanus' plot was denounced, and he was executed.

NEXT: THE LONG REIGN OF ARTAXERXES

What did the Persians learn from their unsuccessful attempt to conquer Greece by military force? If they waited, the Greek threat would disappear when they started fighting one another once more. 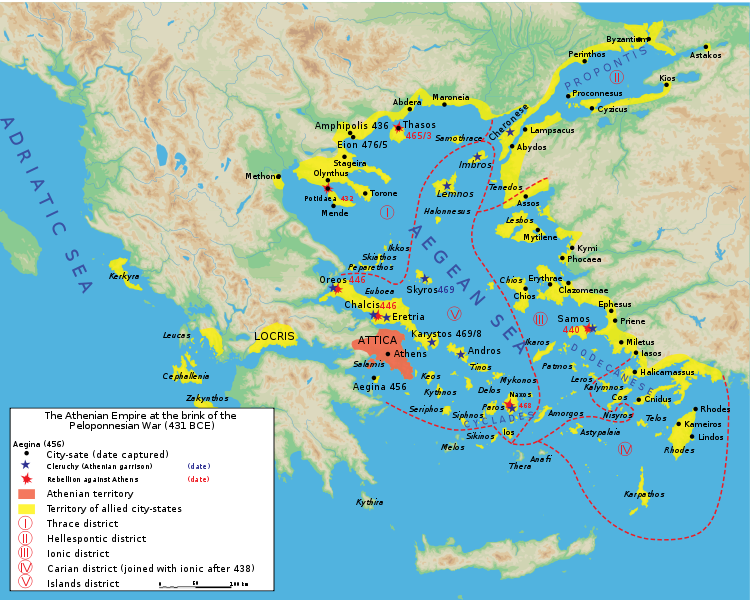 The Delian League in 431 BC

Quarrelled over strategy at Plataea with Mardonius. He believed in diplomacy rather than force as a way to win over the Greeks. His appointment as satrap of Phrygia (NW Turkey) shows what Xerxes' new policy probably was.

All Greek cities were to contribute money or ships for the common cause. Its treasury was to be on the tiny island of Delos, sacred to Apollo. After Eurymedon, the league gradually evolved into an Athenian empire. The treasury was transferred to Athens, and cities which tried to opt out were punished severely. The contributions for the league became tribute collected by Athens - which was used to rebuild the temples destroyed by the Persians - in particular the Parthenon on the Acropolis in Athens, with its gigantic gold and ivory statue of the goddess Athena.

Many towns on the Asian mainland in addition to Thrace and Macedonia remained under Persian control. Among them was Halicarnassus (Bodrum), birthplace of Herodotus (around 484 BC), who'd have been a boy growing up in the Persian empire.

The name Xerxes uses for Persepolis.

Not the same as the Persepolis Fortification Archive. These clay tablets (far fewer than in the PFA) were found in the ruins of the treasury at Persepolis. They are in Elamite in cuneiform script, and cover financial dealings between 492 and 457 BC. The earlier PFA deals with payments in kind; in the PTA payments are in silver coin.

The sources are late, unreliable and disagree with each other: but this seems the most likely narrative. The Greek authors like to picture his death as a deserved punishment for a crazy brutal tyrant - after many years of brooding over his failure. This is wrong in every way.

Persian names can be confusing. Don't confuse Artabanus with Artabazus (above).