The road map to peace

The Persians had long ago abandoned the idea of controlling the Greeks by military force - from the latter years of Artaxerxes I's reign it had been much simpler to offer gold, sit back, and wait for the Greek city-states to beat hell out of each other.

Currently (400 BC) Sparta was top dog, having crushed Athens with Persian help in 404 BC. But with the return of Tissaphernes (who'd played a major role in the defeat of Cyrus) to the coast, things were about to change. The Ionians were relying on Sparta to protect them: the Spartans were worried - they'd given tacit support to Cyrus - and were recruiting the remnants of Xenophon's 10,000 who were now back in Greece and eager for action.

Gambling on the weakness and mutual hostility of Tissaphernes (Lydia and Caria) and Pharnabazus (Phrygia) Agesilaus, the new king of Sparta (ruled c.400 - 360 BC) became the first Greek to take on the Persian empire on its own territory. Xenophon gives an interesting detail:

Agesilaus was keen to sacrifice at Aulis , where Agamemnon had sacrificed before going to Troy. When the locals found out, however, they were furious, and sent in cavalry. They told Agesilaus to stop - and threw the victims already sacrificed off the altar.

At first he was extremely successful. Artaxerxes II was enraged at Tissaphernes' inability to deal with Agesilaus and had him executed (395 BC).

But Pharnabazus was more cunning. He appointed Conon , an Athenian, as admiral of the Persian fleet, and began giving money to Athens. The Athenians rebuilt the walls they'd had to knock down in 404 BC, improved their fleet, and even regained support from some of their old allies. When Athens attacked Spartan territory, Agesilaus had to come home, and abandon his plans of conquest. He's said to have complained:

I was beaten by 10,000 Persian archers - I don't mean soldiers, but images on the Great King's coins .

Revival of Athens - and peace, at a price.

In 394 BC Conon and Pharnabazus, with a combined Athenian and Persian fleet, completely destroyed the Spartans at the Battle of Cnidos. The Persians expelled the hated Spartan governors from Ionia, and the Ionian Greeks welcomed their return to Persian rule. In 387/6 BC, the Spartans and Athenians were forced to agree to a peace settlement, known as "The King's Peace" which left the Persians in control of Ionia once more. Diplomacy and gold had recovered the territory lost when Xerxes had tried to conquer Greece by force. The treaty contained the ominous clause:

King Artaxerxes considers it just that ... If either of the parties refuses to accept this peace, I together with those that do accept it, will make war on that party by land and sea, with ships and with money.

Business as usual in Ionia

The Athenians and Spartans despite all their talk of "freedom" had not been popular rulers over the Ionian cities. Persia now restored the old levels of taxation - less than they'd had to pay to Athens and much less than to Sparta. Ionia became prosperous once more - just as it had been over a century ago before the Ionian revolt sparked off the long confrontation with the Persian empire.

End of Sparta and Athens 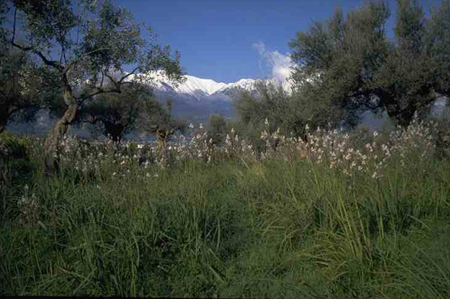 The ancient acropolis at Sparta with a view of Taygetus beyond 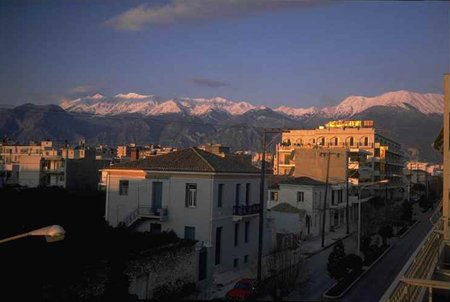 With Persian encouragement, the two leading cities of Greece continued to exhaust each other. For some time Artaxerxes had been nurturing Thebes - traditionally friendly to Persia. In 371 BC, with strong leadership and new battle tactics , the Thebans shattered the Spartans at the Battle of Leuctra. Thebes, with Persian backing, was the new top dog.

WHAT COULD POSSIBLY GO WRONG?

The Persians finally achieve peace with the Greeks on their own terms, after a long campaign of diplomacy and bribery.

Strangely, the Ionian Greeks are delighted to be freed by the Persians from the tyranny of Athens and Sparta 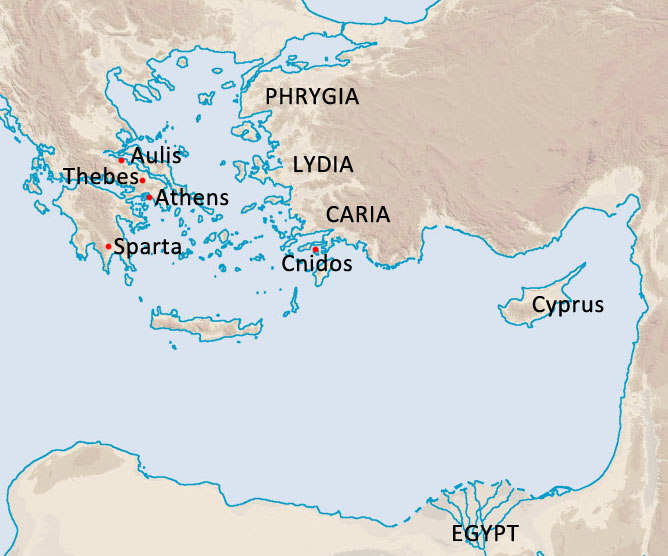 Ionia and the Battle of Cnidos

In the myth of the Trojan War (believed to be historical by most Greeks at this time), Agamemnon had sacrificed his daughter Iphigeneia at Aulis to the goddess Artemis, whom the Greeks had offended, and who was preventing the wind from blowing. Agesilaus - like Alexander later - is quite certain about wanting to be seen in the context of the traditional east-west conflict

Persian Darics, which had an image of an archer on them - see here.

An interesting character: responsible for losing the battle which handed victory to Lysander the Spartan in 404, he fled to Cyprus, where he joined forces with Evagoras. Evagoras had got his family's kingdom back, but needed Athenian help, hence his support for Conon. Cypriot ships joined the Athenians and Phoenicians at Cnidos. But the Persians regarded Cyprus as theirs, and, later, after a long struggle, managed to depose him. (374 BC)

The Thebans had developed a "buddy" system where a pair of soldiers supported each other, and invented the "phalanx": instead of having all your troops in a long line, you made part of the line deeper and thus more effective. The Macedonians improved further by using longer spears so you could form an even deeper phalanx. From the enemy point of view, the phalanx would look like a giant porcupine backing towards them.