The Ashkanian dynasty according to tradition was founded by Ashk - Arsaces in the Greco-Roman accounts - who was descended from the Kayanians. The Ashkanians are thus the historical Arsacids or Parthians. The 500 years between the death of Alexander (Sekander) in 323 BC and the beginning of the Sasanian period are dismissed in 20 couplets by Firdowsi: the time-scale is also compressed into 200 years: the national story completely ignores the Seleucid period. Firdowsi complains of the shortage of material - but the real reason, one suspects, is that later generations didn't regard the Parthians as real Persians. The Ashkanians were seen as merely a confederation of minor tribal rulers, none of who were of any consequence apart from the last: Ardavan V (Artabanus). And he's only included as a lead-in to the story of Ardashir. Alexander (Iskander), who was an Iranian hero in the earlier part of the Shahnameh, becomes an evil villain the the Third Era - presumably echoing different traditions drawn on by Firdowsi.

Some of the stories told in the Shahnameh about the Kayanians could well have originated in the Ashkanian period, including the Rustam stories from Seistan.

And then comes Ardashir, a descendant of Sasan, son of Kai Bahman, and thus from Kayanian ancestry. He eliminates the petty kings, reunites Iran, and promises to restore its greatness. But Firdowsi has a way (like Herodotus) of turning a bald narrative into an exciting tale:

The life of Ardashir according to the Shahnameh of Firdowsi

After Dara (Darius III) was murdered, his son Sasan escaped to India, where he died, leaving behind a son, also Sasan. Time passed, and a great-great grandson of this Sasan, another Sasan, was, like his recent ancestors, poor and humble. While still a boy, he was hired as a shepherd by Papag's head shepherd, and in time, through hard work, became head shepherd himself. This Papag was governor of Fars, a vassal of king Ardavan the Great. When Papag dreamed that Sasan, or his son, would become king one day, Sasan revealed his royal background (descended from the Kayanian king Kai Bahman, son of Esfandyar, son of Goshtasp). Papag made him rich, and gave him his lovely daughter in marriage.

Soon they had a beautiful son, whom they called Ardashir, the apple of his grandfather's eye. King Ardavan heard about Papag's amazing grandson and sent for him. He was so impressed he began treating him like a son. But out hunting one day, Ardashir killed a wild ass showing extreme skill with his bow. One of Ardavan's actual sons, however, claimed the kill was his: when Ardashir protested, Ardavan demoted him to stable-boy. Papag advised Ardashir to accept his fate. Golnar, a beautiful slave-girl, favourite of Ardavan, saw him and fell in love with him. Old Papag died, and Ardavan made his son Bahman governor of Fars in his place. When Golnar found out from astrologers that Ardashir was destined to become a great king, they ran away together. Ardavan was furious and set off in pursuit. But when the young people got to Fars, a great army of supporters rallied to Ardashir - Papag's men, Dara's descendants and even deserters from Bahman. Ardashir stopped in a fire-temple to pray, and went on to win a crushing victory over Bahman.

Now master of Fars, he moved against Ardavan, who after a hard-fought war, was captured and executed. Ardashir married Ardavan's daughter, and returned to Fars where he built a magnificent city with palaces, gardens and fire-temples at Gur. Next he made war on the Kurds:

The grass was crowned with their blood, the plain was filled with their severed heads and limbs, and the heaps of dead were dreadful to see.

Firdowsi next tell a story "revealed by a local dignitary" of a man called Haftvad living in Kerman, whose daughter one day found a worm in her apple. She kept it and looked after it and every day the worm seemed to bring her good fortune. Haftvad began feeding it and it grew and grew - after five years it was the size of an elephant, and had brought Haftvad such luck that he now had a huge army and ruled from Kerman all the way to China. Ardashir was angry at Haftvad's success, but was soundly defeated when he fought a battle against him. A low-born man called Mehrak took advantage of Ardashir's absence fighting Haftvad to plunder his palace. Mehrak was quickly caught and beheaded, but the power of the worm was still growing. But Ardashir had an idea, a trick to destroy it. He went to the castle where the worm was kept, with just a few men, pretending he was a rich and succcessful merchant - thanks to the worm. He told its keepers he wanted to feed it himself to bring more luck. The keepers - happy to be off duty - were given wine and got drunk. Then Ardashir gave the worm its meal - not rice, but boiling lead. The worm was finished. Ardashir signalled to his army, and soon Haftvad was defeated and killed. Ardashir returned in triumph to Fars, and then settled in Baghdad, where he was crowned King of Kings.

Khusrau is Khusrau II Parviz, who was widely believed two have married two Christian princesses (Maria, daughter of the Byzantine emperor Maurice, and Shirin from Armenia).

The handsome, brave and talented prince Khusrau is told in a dream by his grandfather (Khusrau I) that he'll meet the love of his life and become king. He has an artist friend called Shapur, who tells him of the beautiful daughter of the Queen of Armenia, Shirin (Persian for sweet), and he falls in love with her description. Shapur shows Shirin a picture of Khusrau, and she falls in love with him. She rushes to Ctesiphon to meet him, but Khusrau, threatened by Bahram Chobin, a would-be usurper, has already left for Armenia. 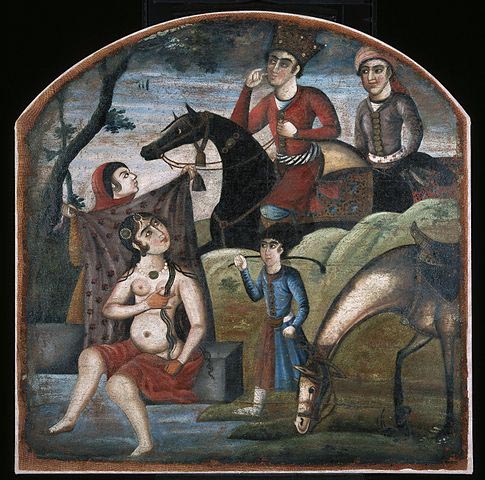 Halfway, the two lovers, without realising, see each other, when Shirin pauses to bathe naked in a beautiful lake. Each continues their journey, Shirin to Ctesiphon where she's accepted (though not welcomed) into the harem, and Khusrau to Armenia. They miss each other again when, recognising the strength of feeling aroused by the first near-miss, they return to their respective homelands: Khusrau on the news that he's become king on his father's death.

Still threatened by Bahram Chobin, Khusrau has to leave his kingdom, and goes back to Armenia. Finally, during a hunt, the two lovers meet and declare their love. Shirin takes her mother's advice to be sensible - and tell Khusrau she'll only marry him if she becomes his queen. Furious at what he takes for a rejection, Khusrau goes to Byzantium, where he promises the emperor Maurice that he'll marry his daughter Maria, if he helps him defeat Bahram Chobin, which he does. He marries Maria.

Meanwhile, Shirin's mother has died, and she is now Queen. Enter Farhad, a stone-mason with incredible strength, who falls passionately in love with her. To get rid of him, Khusrau agrees to let him have Shirin, if he can hack a passage through the mountain at Bisitun. When Shirin visits him, her horse collapses under the weight of her jewelry - but Farhad saves her and carries her home. Khusrau fears he will lose her, and sends Farhad a message to tell him Shirin is dead. In anguish, he hurls himself off the rocks to his death. Khusrau sends messages of condolence.

When Maria dies [poisoned by Shirin according to Firdowsi's version], Khusrau is free to marry again, but meets another woman, Shakar - who is beautiful but does not satisfy his soul, and he pines for Shirin. Eventually they meet again, and are reconciled, thanks to a beautiful love duet, where the singers express the lovers' true feelings for each other. Finally they get married. But Shiroi (ie Kavad II), Khusrau's son by Maria, falls in love with Shirin at the wedding. He brutally murders his father as he sleeps beside his wife.

At the funeral, she shuts herself in Khusrau's tomb, and kills herself. She is buried beside her husband.

From Dara (Darius III) onwards, the main characters are mostly from now on real historical personages, although the stories told about them are often bizarre and fanciful.

On this page see the Shahnameh version of the accession of Ardashir I (who defeated the Parthians and founded the Sasanian dynasty), and the romantic story of Khusrau and Shirin (Khusrau II)

The circular city of Firuzabad, south of Shiraz. See here

Ironically, on the very day I added this story (22 September 2015), it was announced that the current Iranian regime had decided to censor a new edition of the 831 year old poem on grounds of indecency!