"On his ascent to the throne in 669 BC, arguably the most powerful individual on the planet." 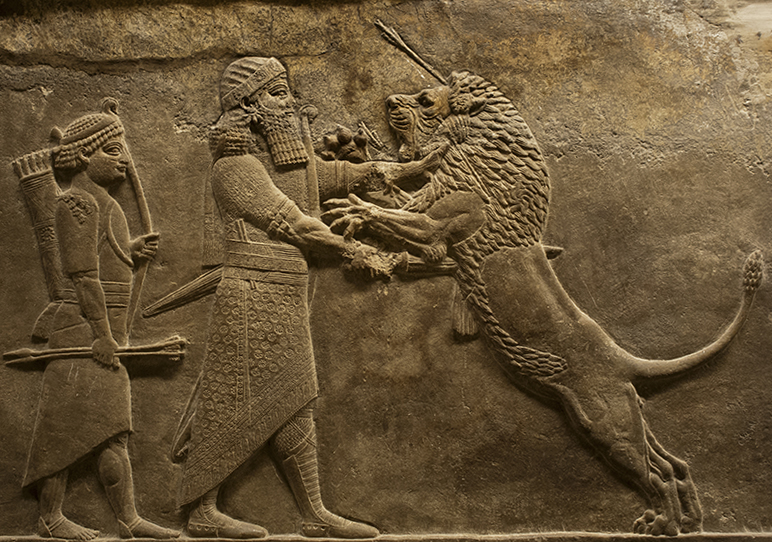 Ashurbanipal despatching a rampant lion. This theme of the heroic king killing the embodiment of evil was also used by Nebuchadnezzar, and by Darius in Persepolis, and on coins. But note the pens in his belt: the pen was becoming as mighty as the sword. British Museum. Photo AMW.

Once adopted as successor to Esarhaddon, Ashurbanipal moved into the crown prince's palace. There he had full military training (chariot-driving, horsemanship, archery) - though he never needed to use it personally (except during carefully-staged lion hunts). He acted as a spy for his father, gathering intelligence on his enemies (and rivals). He got married, and may have been inducted into the rituals of the Assyrian religion. Even on a lion-hunt (picture above) he always had a stylus tucked into his belt - showing his interest in scholarly and cultural matters, even if he may not have been literate himself. As king he assembled a library of 10,000 volumes in Nineveh.

Esarhaddon thwarted a coup against him, led by a distant relative, but supported by some of his own advisors. The conspirators were executed en masse. But he died on his way to re-establish control in Egypt, which he had previously conquered. With the help of the queen mother Naq'ia, Ashurbanipal's succession was assured: his older brother Shamash-shumu-ukin was fobbed off with "king of Babylon" - but was effectively a vassal. So much for Esarhaddon's idea of "equal brothers" - the imbalance was to have consequences.

Esarhaddon had conquered Kushite Egypt in 671 BC, but left it to govern itself under Assyrian military supervision. Very soon Taharqa, the Kushite pharaoh started to reassert control - Esarhaddon was on his way to put things right when he died. Once Ashurbanipal was settled in, his first priority was to bring Egypt to heel. His army defeated the Nubian pharaoh, forcing him to retreat to Thebes, and thence back to Upper Egypt. Thebes was then captured and plundered, the spoils being taken home to Nineveh.

Ignoring his older brother, the supposed king of Babylon, Ashurbanipal took it upon himself to rebuild important temples, and refurbish the celebrated city walls. Shamash-shumu-ukin pretended to tolerate his brother's interference, but began plotting with Assyria's numerous enemies (most of the surrounding territories in fact - including Elam, Palestine, Ethiopia and Arabia). Ashurbanipal tried to defuse the situation:

"Do not trust the lying words of my unbrotherly brother! I swear by Ashur and Marduk that I have not planned the bad things he has accused me of ..."

A bitter civil war broke out, with treachery and betrayals on both sides. Ashurbanipal gradually got the upper hand, despite his brother's powerful foreign allies, and took hold of most of Babylon's territory: Babylon itself held out for two years:

"Instead of bread, they ate the flesh of their sons, instead of beer, they drank the blood of their daughters ... plague, pestilence, disease reduced the people of Akkad ... the corpses were blocking the streets ... the silence of desolation lay over the city."

Shamash-shumu-ukin died in a fire - it's uncertain from Ashurbanipal's account whether he was murdered or committed suicide - and the siege, under Babylonian resistance, ended in 648 BC.

Elam's independence was not respected any more than Babylon's. Its kings changed like football managers in the Premier League - seven in a decade: they were either too close to Assyria or nor close enough - either way meant a shortened reign. In 653, Ashurbanipal defeated the Elamite king Teumman at the Battle of Til-Tuba - an event which was commemorated in carved panels (now in the British Museum), acknowledged as masterpieces of Assyrian art - despite the brutality of their subject-matter (including Teumann's beheading). The final blow to Ashurbanipal came when Elam refused to hand over the man who'd sided with Shamash-shumu-ukin, despite threats of devastation. Ashurbanipal invaded in full force, to crush Elam once and for all. It's oldest and most important cities were destroyed, their temples, palaces, treasuries and royal tombs were flattened. The king who'd defied the Assyrians was captured and humiliated by being forced to wait on Ashurbanipal at banquets, and pull his chariot at the New Year festival. In 640 BC he destroyed the Elamite capital of Susa. 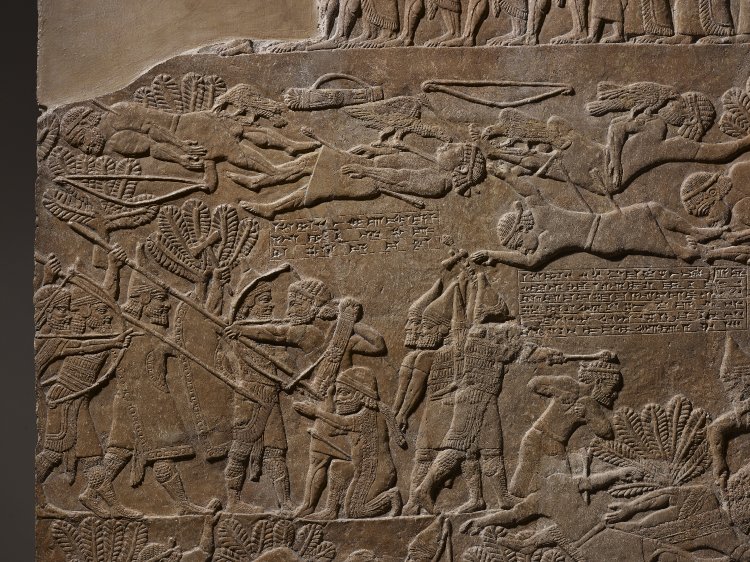 While Ashurbanipal was dealing with trouble in Elam, various Arab leaders tried to take advantage and free themselves - even raiding Assyrian towns. He made them pay heavily. They suffered ritual humiliation and torture.

Despite the vast quantities of material in the cuneiform sources, the ultimate fate of Ashurbanipal is an unsolved mystery: when did he die? How did he die? Unfortunately Delacroix's vivid picture of the Death of Sardanapalus is based on Ctesias's lurid but wholly fictitious account.

Sardanapalus surpassed all others in luxury and idleness. He lived the life of a woman and spent his time with his courtesans, spinning purple cloth ... he took to wearing female clothing and made up his face and body with white lead. He purposely adopted a woman's voice ... during his drinking sessions, he pursued the delights of sex with men as well as women ... Since these were the ways of the man, not only did he en his life in a disgraceful manner, but he also utterly destroyed the Assyrian empire, which had been the longest lasting of any recorded.

He built a huge pyre and heaped all his gold and silver and royal clothing on it, and shut his courtesans and eunuchs in a room inside it. He set fire to it and burned himself and all the others to death, and razed the palace to the ground.

NEXT: THE LIFESTYLE OF A MONARCH

Egypt at this time was under the rule of Kush (Nubia), the kingdom of Upper Egypt. Esarhaddon was successful on his third attempt to take Egypt - a previous invasion is said to have been thwarted because a storm made the Assyrian bowstrings too wet to function (or it may have happened to Sennacherib).

Also used as the basis for Byron's tragedy Sardanapalus. Maybe Ctesias was confusing Ashurbanipal's fate with that of his brother Shamash-shumu-ukin.