These were well-planned and well-organised events. No hunting was involved. Previously captured lions were released from cages into a fenced "park" or arena whose perimeters were guarded by troops with dogs to prevent the quarry escaping. The lions would be weakened and prepared for death with spears and arrows - from attendants and the king himself. The king would be in a chariot or sometimes on horseback - but would dismount to dispatch the moribund, but apparently still rampant creature with a sword thrust to the belly.

The image of the monarch killing a lion rampant with a sword was virtually the trademark or brand logo for middle eastern kingship. It long predates Ashurbanipal - and was taken up by Darius in his palace at Persepolis (pictured on the right).

A wonderful series of gypsum wall-panels from Ashurbanipal's North Palace at Nineveh illustrate the entire event. The artistry and naturalism with which dead and dying animals are depicted has encouraged some to think that the artist was an animal-lover. Highly unlikely! They have been displayed since their discovery in the Assyrian Basement at the British Museum. A selection of photographs of the panels can be seen here:

Cyrus was continuing the Assyrian traditions when, according to Xenophon, he used lion hunting as a means of training his troops:

The state bears the expense of the hunting for the reason that the training it gives seems to be the best preparation for war itself ... they must often whet their courage when one of the fierce beasts shows fight; for, of course, they must strike down the animal that comes to close quarters with them, and they must be on their guard against the one that threatens to attack them. In a word, it is not easy to find any quality required in war that is not required also in the chase. 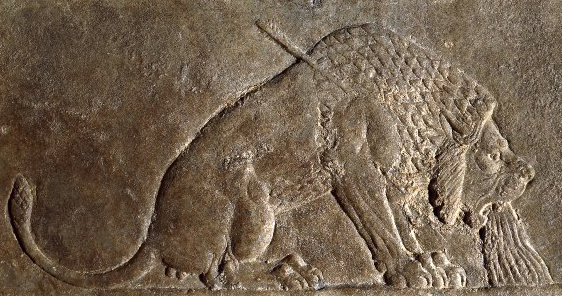 The mortally wounded lion vomits blood as he strains to cling on to life. British Museum.

The Palace at Nineveh

Actually he had two. The vast "South-West Palace" was already there - but Ashurbanipal chose to build a new one for himself, on the site where had grown up and relished his years as Crown Prince.

Nineveh - a very ancient city as shown by Max Mallowan (Mr Agatha Christie) dating back to at least 6000 BC (8000 ya). It became a centre for the worship of Ishtar in the Old Assyrian period. It became the capital of the Neo-Assyrians, and there was much palace-building and expansion, especially by Sennacherib. It occupied around 7 square kilometres, with 15 great gates, and a population of between 100,000 and 150,000 - with an efficient water-supply system of canals and aqueducts. It's likely that the Hanging Gardens of Babylon were actually in Nineveh. After its destruction in 612 BC, the city remained an unoccupied ruin, which had disappeared by the time Xenophon passed by. After the Arab conquest, Mosul began to replace it - though the site was unknown in modern times until its discovery by Layard in 1847. Recently (2019) the site of Nineveh has been under threat not only from Daesh, but from the encroachment of Mosul's suburbs, and the parlous current state of the Mosul Dam.

The North Palace was built almost entirely of mudbrick - fired bricks, protected with bitumen, were only needed for the drains. Walls would have been faced with gypsum/alabaster, and topped with blue-glazed bricks. Suites of rooms were built around courtyards, and decorated with brilliantly coloured carved reliefs. Lebanese cedar was used for the roofs, and doors were of juniper, lined with metal. Strangely there were no massive 30 tonne winged bulls (known as Lamassu) to protect the king, as now stand in museums around the world. Similar Lamassu were reproduced at Persepolis. 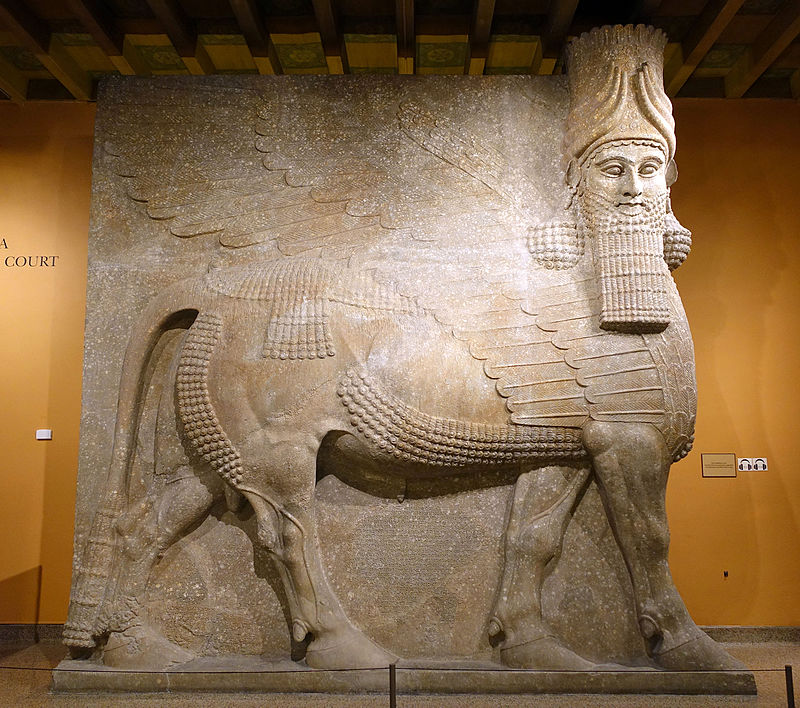 The king at home

Food and drink in generous quantities can be seen on relief panels, and recorded in inscriptions and in Ashurbanipal's correspondence. There would have been music - horizontal harps were favoured. Board games were very popular - especially the "game of 58 holes" where competitors moved tokens around the board according to the throw of the dice. Outside were lavish gardens, with water-features fed by an aqueduct. An attractive panel from the North Palace shows the king and queen relaxing with a drink - she sitting, he on a couch - framed by vines and palm trees, and fanned by a pair of servants, while women offer food, and a musician plays in the background. A happy, relaxed and successful monarch taking his well-earned ease!

The palaces and temples of Nineveh yielded some 30,000 cuneiform tablets, mostly broken, varying in size from roughly A5 down to tiny ones an inch long. There are roughly three types of document:

All items were classified - numbered and tagged for easy reference. The clay tablets have survived: there was probably also a mass of material written on wooden boards or papyrus. A great deal of the library had been passed down from earlier regimes - it's not clear what Ashurbanipal's own input may have been.

NEXT: URARTU - A RIVAL EMPIRE

Having been amazed by the sophistication of Ashurbanipal's lifestyle (dramatically presented in the 2019 exhibition at the British Museum - though mostly rearranging items that have been held in its collection for over 150 years) it's worth remembering that this was the flowering of a Mesopotamian civilisation which began over 2000 years earlier with Sargon of Akkad: a timespan for which the equivalent in Europe would take us back to the Punic Wars. 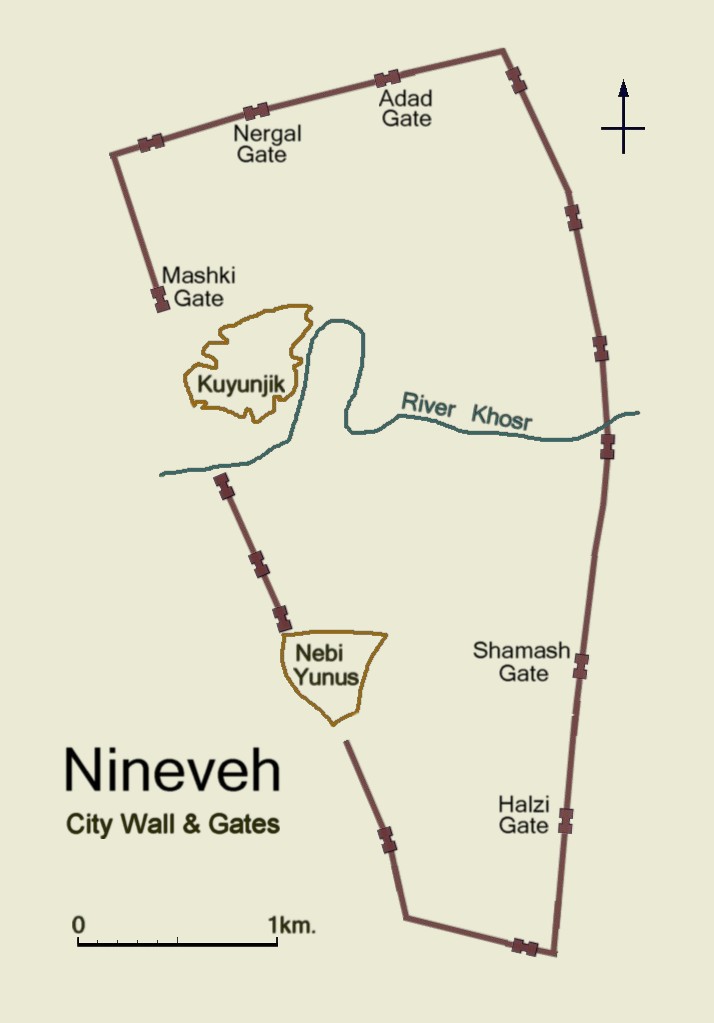 Map of Nineveh showing city walls and 15 gates. The palaces and main temples were on the mound of Kuyunjik