The Sumerians were probably incomers from Central Asia arriving at the head of the Persian Gulf around 5000 BC - 3000 years ahead of the Medes and Persians. Their language shows no connection whatsoever with the Semitic languages (Akkadian/Babylonian) or the Indo-European (Iranian) - or indeed with any other known language, although they were forced into constant interaction with the Semitic peoples settling or settled in the region. Perhaps even before they arrived in Iraq, they understood the use of metals and had a pictographic writing system. It influenced pre-dynastic Egypt, and developed into a full phonetic system by around 4000 BC. The terrain was suitable for agriculture and domestic animals. They recorded myths and stories about their gods and rulers and their deeds which enable the tentative reconstruction of their history. Best known, of course, is the series of tales about their hero Gilgamesh, which the Babylonians later worked into an epic rivalling Homer. 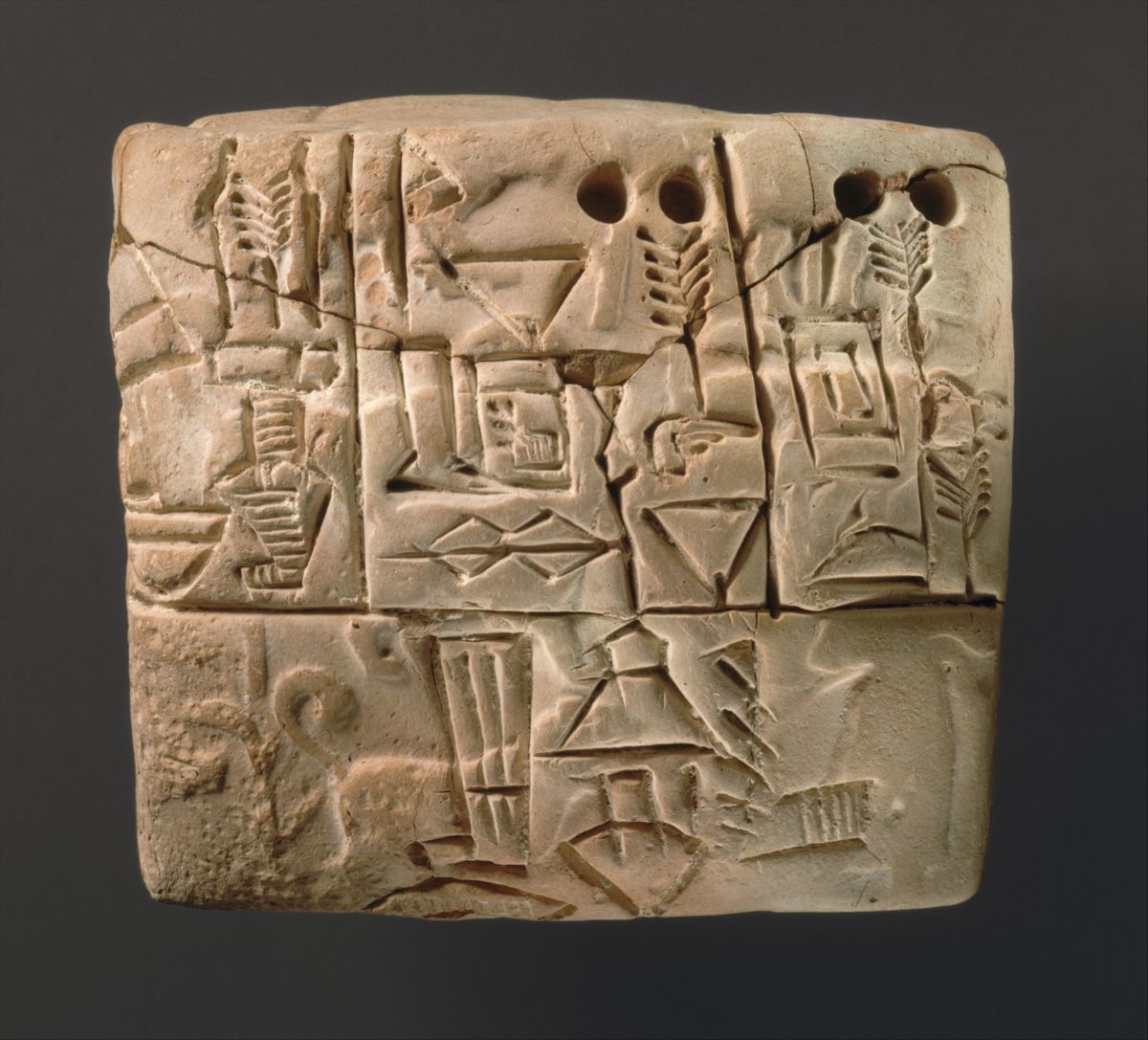 Uruk (Erech), the best-documented Sumerian city, was possibly the world's first (from 3200 BC) and certainly very soon its largest - at twice the area of ancient Athens, with a population of 25 - 50,000. It had a wall and tax-collectors and a king - Gilgamesh. After 3000 BC, Uruk was joined by other cities, such as Kish, Nippur, Isin, Lagash, Eridu and Ur. The ubiquitous bevelled-rim bowls (BRBs) suggest a working/slave/agricultural class being paid in standardised grain and beer rations. There were soldiers and - of course - scribes. Writing was an essential tool in the organisation of labour and collecting tax in the context of a city. A drying climate may have accelerated the move to cities - as labour was needed to create and maintain irrigation projects. 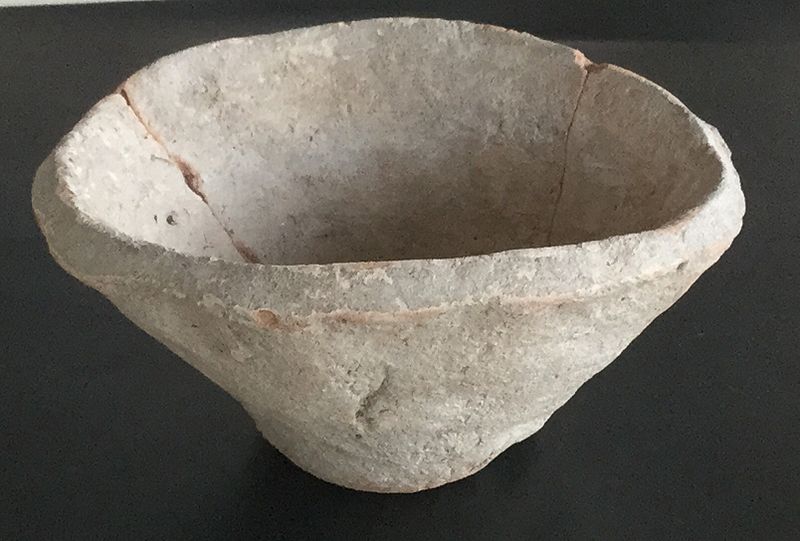 Their religion was uncompromisingly hostile to that of their Semitic rivals and enemies - the Akkadians. It's remarkable how their Sumerian religion and culture engulfed that of the Semites with whom they struggled for 2000 years - the Akkadians, and later even the Assyrians, despite their political hegemony, accepted the gods of Sumer. 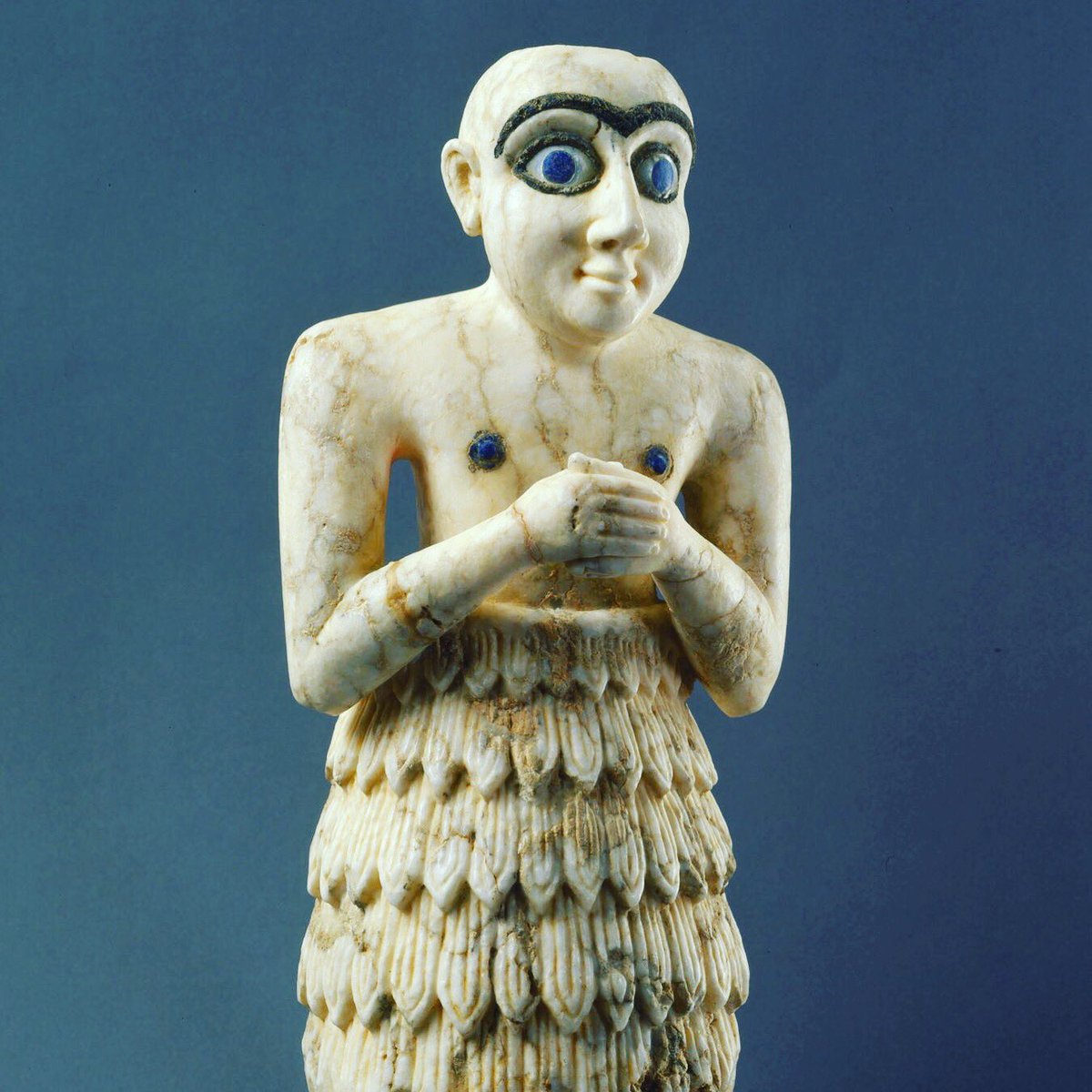 The Sumerian supremacy lasted until around 2800 BC, when Sargon of Akkad created a unified empire among the peoples of the lower Tigris and Euphrates: he began the "tradition" of waging continuous warfare against his enemies - at this time the Elamites to the east, and other Semites to the west. But after about 200 years (2625 BC) Sargon's kingdom began to disintegrate - leaving it wide open to destruction by mountain tribes from Gutium, who controlled Mesopotamia for a century. The Sumerians reasserted themselves, reuniting Sumer and Akkad and extending their empire, but continuing to battle against the Elamites.

From 2123 - 2081, Babylon was ruled by the Amorite Hammurabi. Elam was crushed, but supremacy passed finally to the Semites - we hear no more of the Sumerians. A copy of Hammurabi's law code, the first ever written body of law, was found at Susa - presumably captured as booty by the Elamites. But soon (in 1595 BC) Babylon fell to the Hittites , and then to the Kassites - who ruled for 576 years, but central authority decayed, and the land reverted to a patchwork of territories under the control of local warlords. Its wealth was unaffected however - but lack of aggressive leadership allowed smaller civilisations to develop on the periphery - Elam of course came back, but there was also Urartu, and the Hittites, the Phoenicians, the Judaeans, Minoan Crete ... creating an opportunity for a new vigorous and aggressive power: Assyria. Under Tiglath-Pileser I (1110-1100 BC) Assyria advanced as far as the Black Sea, but consolidation proved difficult, until the reign of Ashurnasirpal II... (continued here)

Babylon remained reluctantly under the rule of Assyria. Sargon II proclaimed himself king of Babylon, which was seen as a provocation - and resentment and rebellion led to its destruction, twice, by Sennacherib and again by his grandson Ashurbanipal. But in the chaos and civil war which followed Ashurbanipal's (unexplained) death, a native Babylonian, Nabopolassar gradually consolidated control of Babylonia. He was helped by an attack by the Mede Cyaxares on Assyria, which led to an alliance between the Babylonians and the Medes. Together they launched an attack on Nineveh, which was ultimately successful in 612 BC. An Assyrian attempt to relocate to Harran was frustrated, although the remnants of the Assyrian army, assisted belatedly by the Egyptian pharaoh Necho II and his Greek mercenaries, tried a counter-attack. The Assyrians and Egyptians were thrashed by the Medes and Babylonians, led by Nabopolassar's son Nebuchadnezzar, at the Battle of Carchemish in 605 BC..

Under Nabopolassar (626 -605 BC) there began a massive revival of ancient Babylonian culture: Akkadian replaced current Aramaic as the language of administration, and even Sumerian was resuscitated; cuneiform was deliberately archaized to look like the ancient Akkadian inscriptions. Temples and ziggurats were restored, Babylon got a double wall, ancient statues were revered once more; irrigation seemed were revived and repaired. City life flourished, craftsmen were well rewarded and the countryside brought prosperity to approved officials.

Already a proven leader, as king he was to become the "greatest man of his time in the Near East" (CAH III p212) - soldier, statesman, architect. Erratic Egyptian support encouraged discontent in Phoenicia and Judaea - although the rest of the Levant remained complaisant. Nebuchadnezzar besieged and captured Jerusalem, carrying off spoils from the Temple, and deporting thousands of soldiers, artisans, wealthy citizens and the royal family (deservedly according to 2 Kings 24 - punishment for ignoring Jeremiah's prophecies). The new king of Judaea, Zedekiah, did not learn from his predecessor's errors: Nebuchadnezzar returned - the walls were pulled down, any remaining metal objects were pillaged, and the surviving citizens (except "only the weakest class of people") were deported to Babylon and

Zebediah's sons were slain before his eyes; then his eyes were put out, and he was brought to Babylon in fetters of bronze.

He also had to deal with Egypt - but the unpopular pharaoh who had ratted on the Judaeans was dethroned by his own people - in favour of a general: Amasis, the philhellene who was to be the last independent ruler of Egypt. 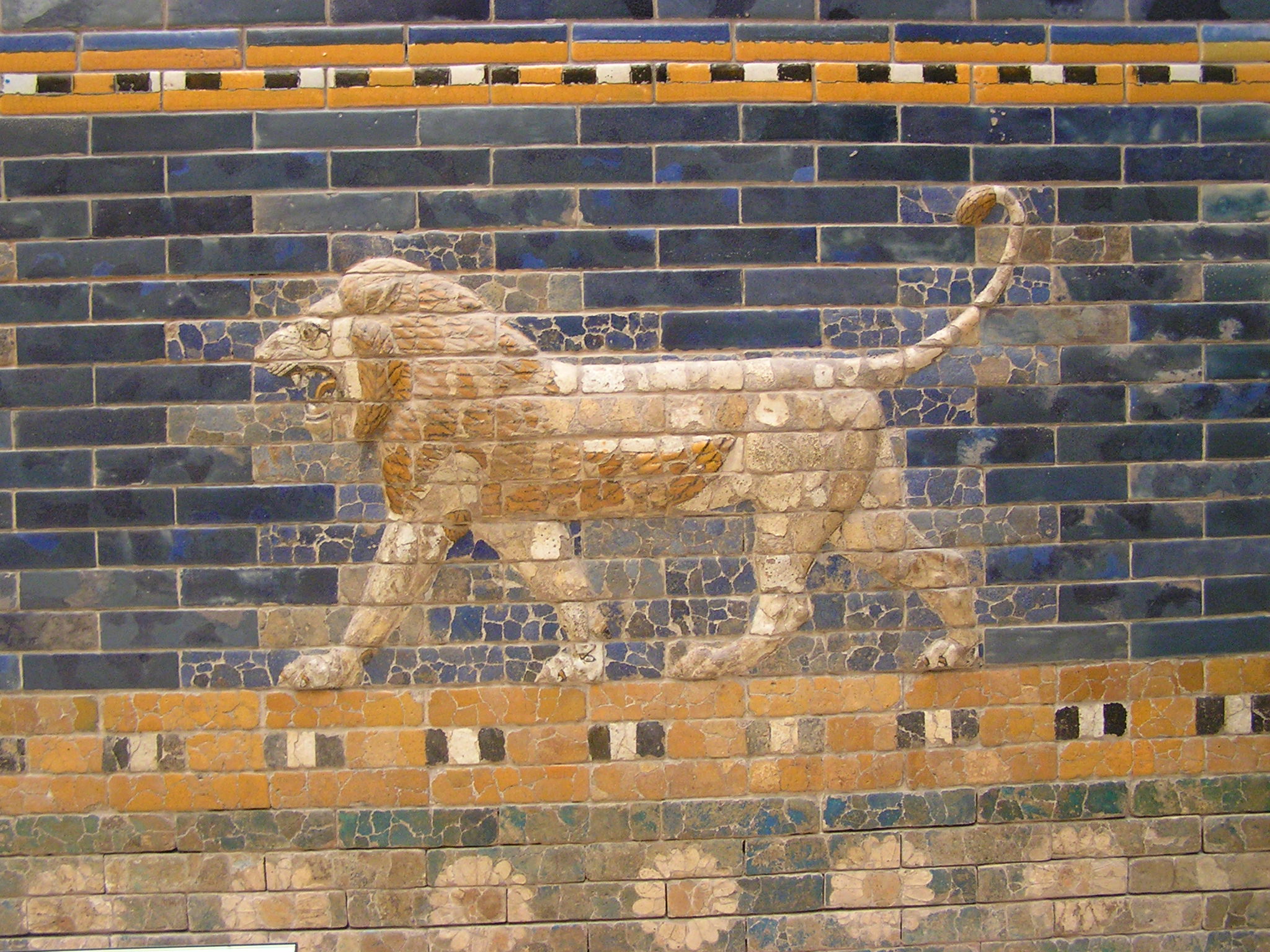 One of the fantastic beasts that adorned Nebuchadnezzar's Ishtar Gate in Babylon - there are also bulls and gryphons, all symbols of the god Marduk. Photo AMW

Unlike Ashurbanipal, Nebuchadnezzar was not a literary man. His forte was building - magnificent temples and palaces - and he restored the beautiful wide processional way from the Ishtar Gate to the temple of Marduk. He had no material other than clay available for his buildings. He's said to have built the "Hanging Gardens" for his Mede wife who was homesick for her mountains (though it's now thought they may have been in Nineveh). 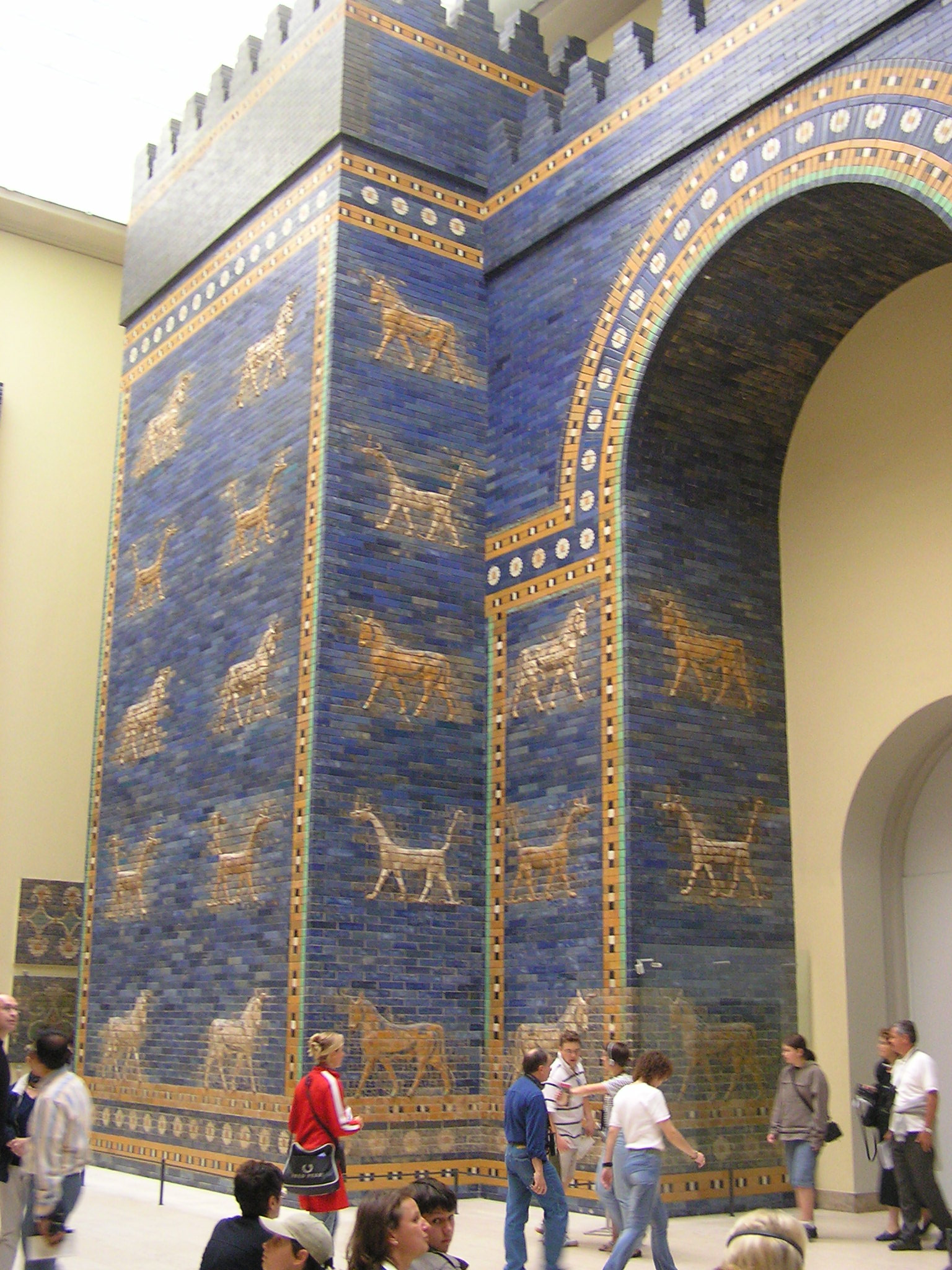 The Ishtar Gate, through which one entered Babylon from the north, reconstructed in the Pergamon Museum, Berlin. Photo AMW.

He records his achievement:

It was not to be. Nebuchadnezzar died in 562 BC

The reigns of Nebuchadnezzar's descendants (562 - 556 BC) were short and unremarkable. In 556 BC Nabonidus (556 - 539 BC), an Assyrian, made himself king. He was unpopular for several reasons - one being his attempt to move the images of all the gods to Babylon. He seems to have left much of the day-to-day administration and command of the army to his son Belshazzar. In 539 BC, Cyrus invaded Babylonia, and defeated the Babylonian army - Nabonidus escaped and took refuge in Babylon, but Cyrus' troops, under Gobryas, entered the city without fighting, Nabonidus was caught - and Belshazzar was killed fighting a few days later. Cyrus posed as the avenger of Marduk, and claimed the throne as a legitimate successor to the Kings of Babylon. 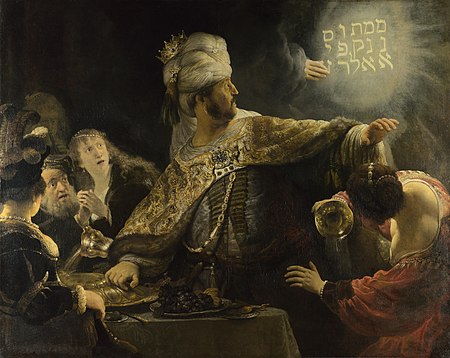 NEXT: ASSYRIA - A PERSISTENT ENEMY 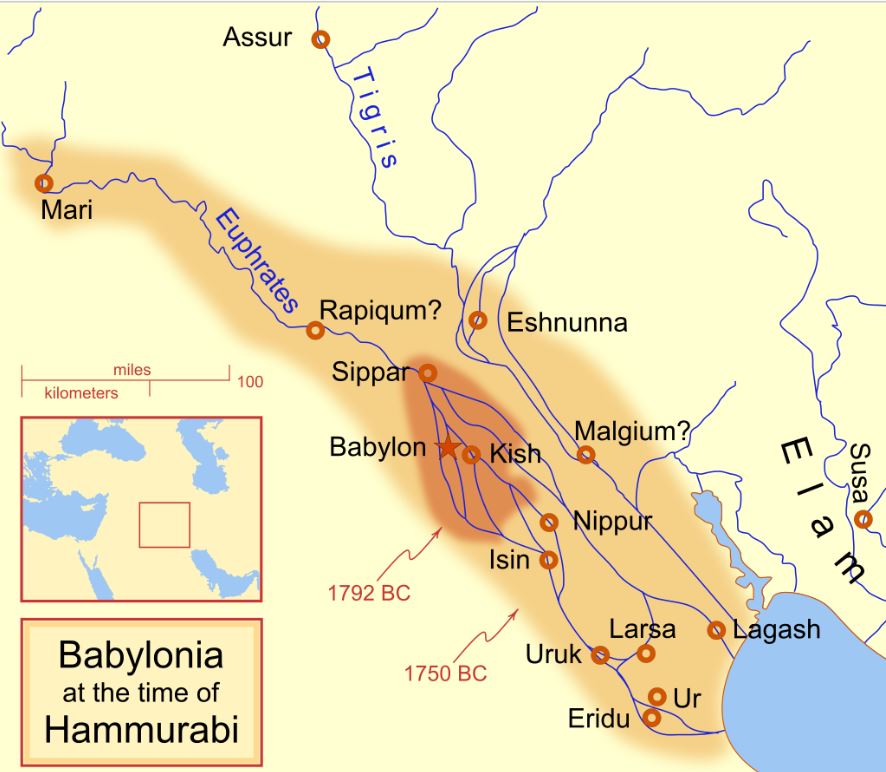 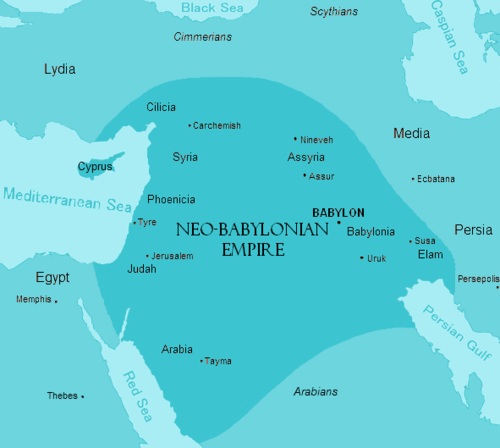 The tale was among 23.000 undeciphered cuneiform tablets discovered by Layard in Nineveh in 1844, and sent to the British Museum. It's turned out that five of the tablets tell different stories about Gilgamesh, in Sumerian, and date from 2100 BC. In around 1700 BC, a more continuous version was written in Akkadian, and it's a revision of this, made in about 1200 BC which, combined with earlier fragments is the basis of the various translations available today. By far the best is Stephen Mitchell's (Profile Books 2005).

Marched 1000 miles from their capital at Hattusa in central Turkey to Babylon, burnt it, ended the Babylonian empire, and then simply returned home, leaving a power-vacuum for the Kassites. The Hittites (named from Biblical references) carved out a very successful empire in Anatolia and Syria, which regarded itself on a par with Egypt. The empire fell and vanished in the 12th century BC, the cause of which is still hotly disputed.

Appear to have been a warrior tribe from the Zagros mountains. They spoke a non-Indo-european language (unrelated to Iranian or Semitic languages), but some of their leaders had Indo-european names, suggesting the possibility they may have been ruled by an Indo-European (Iranian?) elite. Very little is known about them, as they left no written records: about 60 words and a further 200 proper nouns are known.

For the few, of course. The people were tied to the large estates, and paid rent as well as providing labour. Estates were managed by entrepreneurs - a system reminiscent of the gabellotti of Lampedusa's 19th century Sicily.

Herodotus has a rigmarole linking Amasis with Cambyses' excuse for invading Egypt. (Herodotus 3.1 ff). For this and his friendship with Polycrates of Samos see here.

Belshazzar appears in the Book of Daniel (a work of historical fiction). The Babylonians feast with sacred vessels robbed from the Temple in Jerusalem. Belshazzar sees the "writing on the wall" (mene mene tekel upharsin -"You have been weighed in the balance and found wanting") - which Daniel says is God foretelling the destruction of Babylon by the Medes and Persians. "Belshazzar's Feast" was painted by Rembrandt.