Bactria as a geographical term refers to territory between the Hindu Kush and the Syr Darya (River Jaxartes) - covering much of modern Afghanistan. In ancient times it bordered Seistan (Drangia/Arachosia) to the south, Chorasmia and Margiana (Merv) to the west and Sogdia to the north. To the east lay India and China.

A bronze age culture (known as the Oxus Civilisation or better the Bactria-Margiana Archaeological Complex) flourished from around 3000 BC. They farmed, irrigated the land, and built impressively. Oxen and camels were domesticated - and model carts indicate use of wheeled transport. Conceivably they had writing. The jury is out on whether they are the Indo-Iranian ancestors of those who later moved down into India and on to the Iranian plateau. Lapis Lazuli from Badakhshan was traded as far as Mesopotamia and Egypt. All in all, there was a thriving civilisation in Bactria, comparable with that of contemporary Mesopotamia. Bactria is one the places claimed as the birthplace of Zoroaster (Zarathushtra) - it was probably somewhere to the east of the Iranian plateau. 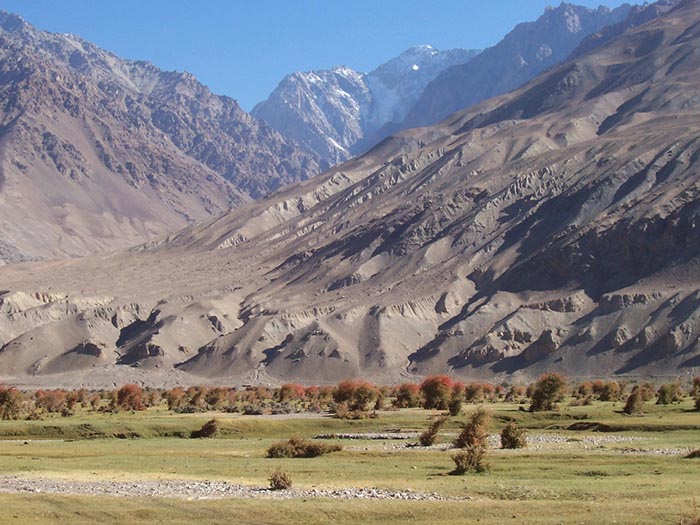 At some point Bactria may have been part of the Median empire - and it may have been conquered by Cyrus I - Herodotus mentions that he was planning an expedition, but if he did, he doesn't think it worth telling us anything further about it ("...most of his minor conquests I will say nothing about."). Darius I claims to rule Bactria on the Bisitun inscription - and its satrap (an Armenian called Dadarsi) was helpful in putting down various rebellions. Archaeology does not suggest much changed beyond the administration. Bactrians provided 30,000 cavalry for Darius III, and resisted Alexander's invasion strenuously. Its then satrap, Bessus, was the ringleader of the murderers of Darius, and proclaimed himself Great King (as Artaxerxes V). But Alexander captured him and executed him cruelly and publicly to demonstrate his disgust. Greek POWs and hostages from 5th century campaigns had been settled in Bactria: there was already a bi-lingual community there when Alexander arrived. Alexander killed them for "the crimes of their ancestors".

Alexander and the Seleucids

The pursuit of Bessus drew Alexander on into the eastern satrapies of the Achaemenid empire. Sogdia was eventually won (he married Roxana, daughter of the satrap Oxyartes); Bactria proved even more difficult. Alexander's policy was to leave large numbers of his Macedonian troops in Alexandrias (cities he founded) across the region. They may well have been joined by Greeks who'd served in the Persian armies. Their presence partly explains why this remote area remained more Greek than other parts of the empire - though not all the Macedonians left in the east were happy: there were several mutinies where large numbers of men tried to get back home. After Alexander's death, the Greeks rebelled; it was ruled as a virtually independent satrapy from 323 to 305 BC, when it passed eventually to Seleucus at the Treaty of Triparadeisos. Details of Seleucid rule are scant - but much can be gathered from archaeological discoveries at AÏ Khanum, a city he (or possibly Alexander) founded in north-eastern Afghanistan, which suggests there was a strong Greek presence. But his influence in the east of his empire declined after 300 BC when he moved his capital from the Euphrates to the Mediterranean at Antioch. Soon others began to take over...

From around 280 BC, wars in the west (especially Egypt) kept the Seleucids busy. Taking advantage of this, and worried about defence against the ever-marauding nomads, the general in charge of the army in Bactria, Diodotus, proclaimed independence. The Greek kings of Bactria successfully defended their kingdom against Saka and Yuezhi, and resisted numerous Seleucid attempts (Antiochus III came closest) to recover it for 130 years. According to the (meagre) written sources, Bactria was a prosperous "land of 1000 cities" - highly unlikely! Only one has been identified and excavated ( Aï Khanum - see above): but that, combined with the finest coinage ever minted in the ancient world would suggest that it was certainly prosperous.. 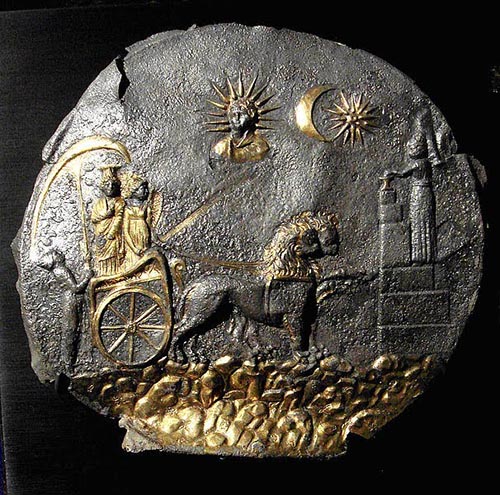 Silver plate with gold figures from Aï Khanum.3rd cent BC.

The Bactrian dynasty, when the opportunity arose, expanded southwards into Gandhara and India, filling the vacuum left by the decline of the Mauryas. But by the 140s BC, they had lost their home base in Bactria; first to the Saka, and they in turn not much later to the Yuezhi (Tochari). The Yuezhi established themselves and eventually, as the Kushans, carved out an impressive empire. The Indo-Greek kingdom lasted for a while longer. See India page. The Chinese visitor Zhang Qian to Daxia (Bactria) in 128 BC reported:

"It has no great ruler but only a number of petty chiefs ruling the various cities. The people are poor in the use of arms and afraid of battle, but they are clever at commerce. After the Yuezhi moved west and attacked and conquered Daxia, the whole country came under their control."

The Kushan empire fell in AD 225. The new Sasanian rulers were known as Kushanshah (King of the Kushans) and kept control until around AD 360. Knowledge of them comes almost exclusively from their coinage. The next wave of nomads, the Xiongnu, Chionites, Hephthalites or simply "Huns" preoccupied the Sasanians until they were dealt with by Khusrau I in AD 557. Information comes mainly from Chinese and Indian sources - with scraps of information only from Greek or Roman authors.

A prosperous region settled by Macedonians from Alexander's army, and probably Greeks from the Persian armies, who created a break-away kingdom. But it eventually could not withstand the nomads from further east. It was brought back under Persian rule by the Sasanians - although nomad pressure continued. 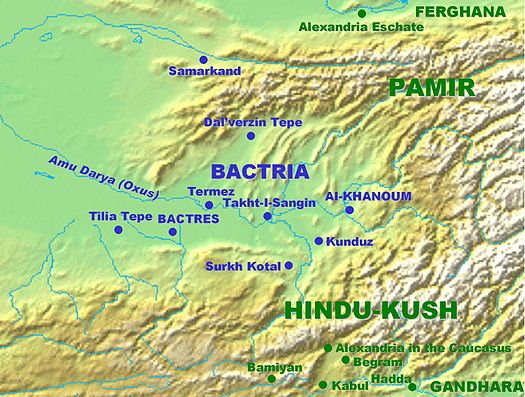 None of their dates are certain. Those given are possible years of accession. This tentative listt reflects research, disputes, and luck by nusmismatists and scholars from 17th century onwards. Likewise, none of these "facts" is assured.

Diodotus I (c 246 - 235 BC) Rebelled against Antiochus II and declared independence. Repelled attack by Saca Parni (later to be Parthians) under Arsaces. Succeeded by his son:

Euthydemus I (c. 225 - 195 BC). Extended kingdom north (into Tarim basin) and south of the Hindu Kush into India. Perhaps captured Ai Khanum around 225 BC (evidence of fire). Held off Antiochus III in 209 BC, and accepted an alliance.

Demetrius I (c.195 - 171 BC) Expanded further into India. First and last who ruled north and south of the Hindu Kush.

Antimachus I a rival in India. Possibly one of several regional viceroys.

Eucratides I (c.171 - 145 BC) Seized power in a coup which deposed and killed Demetrius I, and led to bloody civil war. Consolidated rule in Bactria, but Indian lands were controlled by Demetrius' viceroys. Unable to reimpose his authority, he had to make a deal with Menander I. He lost territory in Bactria to the Parthians, before being murdered by one of his family:

Demetrius II Viceroy of Bactria who was overthrown by Plato.

In the chaos of civil war, the northern Greco-Bactrian kingdom no longer existed by the time of Zhang Qian's visit from China in 128 BC.

Diodotus had had to contribute 20 precious elephants to the war in Egypt.

Apollodorus of Artemita and Pompeius Trogus, both quoted by Strabo.

One of the world's great collections of ancient coins was in the Kabul Museum - its precise fate is unknown. Among them were 624 Greco-Bactrian coins known as the Qunduz Hoard, which included this fine specimen of king Eucratides.

According to Robert Byron (The Road to Oxiana 1937 p.342-3), "Until a few years ago … the old Greek coins of Bactria were still in circulation. Since then, people have begun to think them priceless, and ask 20 or 30 times the museum value for them."

From the coinage emerge the names of several rulers - not all from the same family, and some probably rivals for power. Diodotus and his son lost out to Euthydemus, who established a dynasty which lasted until the Saka conquest.