To begin at the beginning ...

Much on this page is tentative or speculative, and much simplified. DNA reveals definite information, whose interpretation and explanation often require imagination. Mostly based on very recent (2018) DNA studies in David Reich's book: Who We Are and How We Got Here (OUP 2018).

Around 50,000 years ago, the first modern human populations migrated out of Africa into Western Eurasia. Many of these populations , like their Neanderthal cousins, did not survive the massive eruption of a volcano (Campanian Ignimbrite eruption) 39,000 ya, or disappeared for other reasons. They were no closer genetically to later Europeans than to those of their descendants who moved east to become the ancestors of the East Asians.

Today's peoples of Western Eurasia (ie Europe, the Near East, Central Asia) are genetically quite similar to each other, but quite distinct from the peoples of Eastern Asia. 10,000 ya, there seem to have been four ancestral Western Eurasian populations, with no connection to the East Asian peoples, but as strongly distinct from each other as are today's Europeans from East Asians. They were (see also globe above right) :

By the Bronze Age, both groups of farmers had mixed with each other - and with the farmers of Anatolia, and with the European hunter-gatherers.

Expansion of farming from the Near East 9,500 years ago

Farming began in southeast Turkey and northern Syria around 12-11,000 ya. Around 9,000 ya farming reached Greece, and thence spread along the Mediterranean coast to Spain; at the same time it was moving along the Danube and into Germany, Scandinavia, and the British Isles. At the same time (9000 ya) it reached the Indus Valley.

The farming populations began to expand as farming became more successful - with domestication of wheat, barley, rye, peas, cows, pigs, sheep and goats. Farmers did not necessarily replace the hunter-gatherers, but mixed with them and made them adapt to their ideas.

Relatives of the farmers in Anatolia (Turkey) had been the first to expand westwards into Europe. Farmers in Israel/Palestine/Jordan (the Levant) (1) expanded south into East Africa (especially Ethiopia); the farmers of Iran (2) expanded northwards beyond the Caucasus into the Pontic Steppe, and mixed with the Steppe pastoralists and hunter-gatherers and from there spread into South Asia. All groups mixed with local populations (3 and 4), and with each other. By 5000 ya, through this mixing, the original pronounced genetic differences between the four groups was collapsing towards the homogeneity seen in the DNA of Western Eurasians today.

The influx of people from Iran (2) on to the Steppe from around 7000ya led to the formation of the Yamnaya culture. They adapted quickly to the domestication of horses. From the Maikop people of the Caucasus they learned about wheels and carts - and appropriated their particular form of burial in mounds called kurgans. They brought with them in exchange technology and ideas they had earlier picked up from the Sumerian Uruk culture of Mesopotamia (metal-working especially). The Yamnaya were the first to exploit the mobility and flexibility that came from using both the horse and the wheel. The mixture of Iranian farmers (2) and Eastern hunter-gatherers (4) out of which the Yamnaya grew was to prove dynamic and irresistible. 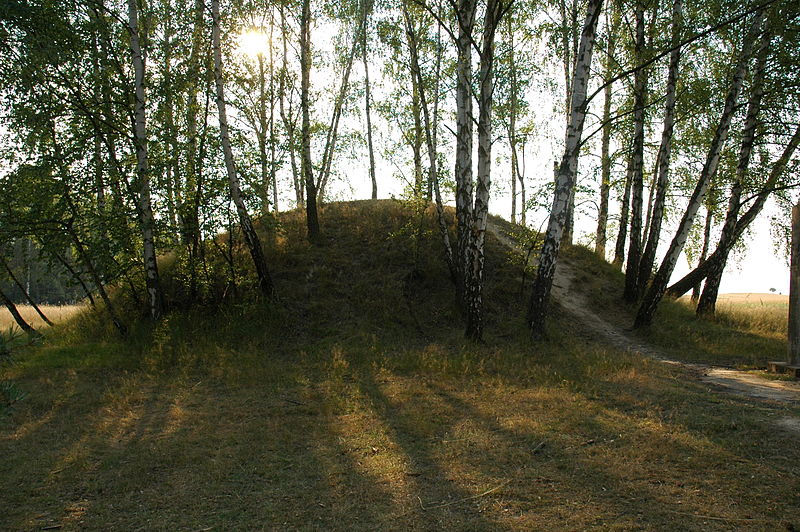 A kurgan (tumulus) in Przywóz, Poland

The Yamnaya, exploiting the opportunities offered by their new technologies expanded rapidly across the Eurasian Steppes, from the Altai to Hungary. And thence, as genetics show, the Yamnaya expanded in all directions - and changed Europe for ever.

The Yamnaya expand around 5000 ya.

Around 5000ya (3000 BC), as DNA analysis proves, there began a massive migration of peoples genetically very close to the Yamnaya which introduced their culture into western Europe. They soon occupied a vast territory between the Volga and the Rhine. Archaeologically, they correspond to the "Corded Ware Culture" which covered this same area. Linguistically, they appear to be among the peoples who brought Indo-European languages to Europe. Improbable as it may seem, there was a definitive replacement of populations in Europe by around 4500 ya by newcomers from the Steppe. There are various theories as to how they did it. Were the existing farmers too few in number to resist? Did the Steppe people cut down the forests, making them more vulnerable? Or did they bring the plague, to which the Steppe dwellers were already immune? Were the Steppe peoples simply more aggressive and warlike?

Whatever the reason, the change was dramatic and permanent. For example, around 5000 ya, the builders of Stonehenge, descendants of farmers from Anatolia, had no Steppe DNA. Not much more than 500 years later, Bronze Age skeletons had at most 10% from the early farmers, and the other 90% from the Steppe. 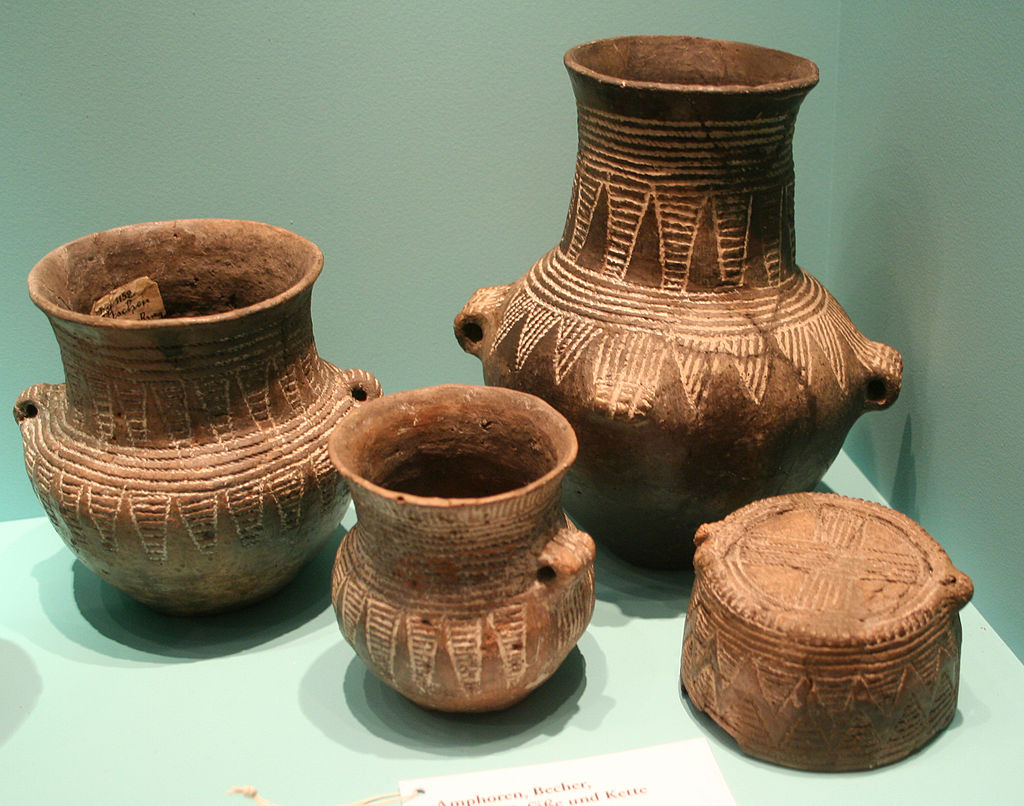 Typical "Corded Ware" pottery - decorated by pressing cord into the damp clay. Around 2500 BC, in Berlin.

The DNA evidence suggests that the Yamnaya - the most important source of ancestry in Europe today - also spread the Indo-European languages. A clinching argument would seem to be that all extant IE languages have in common a wide vocabulary for carts, wheels, and their accoutrements, a technology which only began to spread around 6000 ya - too late for the Anatolian farmers, who came to Europe about 9000 - 8000 ya.

Return of the Native

Thus it's fascinating that the Yamnaya culture - which originated from a meeting and mixing of Iranian farmers and eastern European hunter-gatherers (DNA about 50 - 50), presumably "returned" eventually to Iran from the Steppe around 3000 ya. The same Iranian farmers (2) had moved east into India around 9500 ya - and were joined by Yamnana about 5000 ya , forming the Indus Valley civilisation. They recorded memories of early Indo-European culture in the epic Rig Veda, paralleled by the Iliad and Odyssey in another Indo-European language.

DNA data shows that the Yamnaya were a society where power was concentrated among a small number of elite males, suggesting that male descendants of the Yamnaya with political power or social status were more successful at competing for mates than the local populations. 90% of Iberians (from Spain and Portugal, not Caucasus) have a Y-chromosome type that earlier Iberians did not have. The Y-chromosome patterns show that the early Bronze Age was a time of greatly increased inequality. Powerful males had an amazing impact on subsequent populations - some individuals bequeathing DNA to more descendants than Genghis Khan. The Yamnaya kurgans produce evidence: 80% of burials were males who'd suffered violent injuries, and were interred with their vicious metal weapons. In contrast in Europe before the Yamnaya, females played a central role ("Venus" figurines). Were the Indo-European languages and culture spread by the Yamnaya - their mythologies and epics reveal a male-centred warrior society, in Greek, Norse and Hindu epic?

Male elites passed on their prestige to their descendants - ensuring the success of future generations. Even if women had had equivalent status - biology ensures that they could not have an equivalent genetic impact. There was for the most part, it appears, an asymmetry between males and females. As in many other instances of mixing of populations, there is massive sex bias revealed in the DNA for the Yamnaya.

"Evidence of the antiquity of inequality should motivate us to deal in a more sophisticated way with it today, and to behave a little better in our own time."

NEXT: THE BEGINNING OF AGRICULTURE 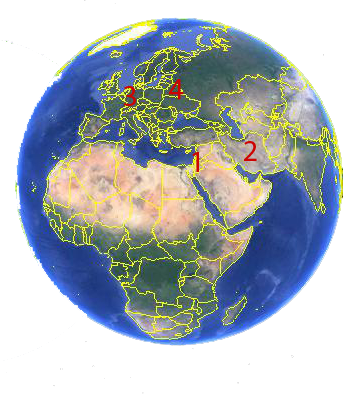 The numbers indicate the approximate homelands of the four human groups in Western Eurasia, 10,000 years ago.

This type of archaic humans (whether a species or subspecies) had been in Eurasia since about 400,000 ya. They were already in decline 39,000 ya, and the eruption may have been the final straw. But the reason for their disappearance in not known for sure.

Genetic evidence reveals similarity of modern Sardinians and people living on islands off Sweden. These are the closest descendants of the Anatolian farmers, who went on to create a unified European population - who built megaliths at Stonehenge and elsewhere, but were blown away by the arrivals from the Steppe by around 4500 ya.

Extended across the Caucasus between the Black Sea and the Caspian, from around 5700 ya to 5000 ya. They possibly themselves originated from Iran. They were a sedentary people, who bred a few horses among other livestock. Archaeological remains include elaborate horse-related objects, the earliest wagon-wheels (though it's not known when and where this revolutionary idea first arose), and the earliest bronze sword and stringed musical instrument. The Yamnaya's contribution was to apply wheeled technology to Steppe living, where the horse was already a major asset.

First domesticated, probably on the Pontic Steppe, around 6500 ya. From there domestication of the horse spread "like wildfire" - as did the wheel when it was invented around 5000 ya, just in time for the Yamnaya.

A form of burial where a pit, often lined with wood is covered by a mound of earth or stones. The earliest are found in the Caucasus, but there are examples from all over the Eurasian Steppe. They have long been associated with the Indo-Europeans. Later kurgans were made by the Scythians/SarMatians/Saca

Bubonic plague - once thought to be exclusively rat-borne - is now known to have a permanent host in the marmots of Central Asia. Recent work on the medieval Black Death has shown that it was predominantly spread by humans. In all probability it travelled westwards along the Silk Route - and it's quite feasible that Yesinia pestis came with the Yamnaya.

Aka the "Secondary Products Revolution" - domesticated animals used for more than meat: pulling carts, dairy, wool. Greatly increased mobility and wealth accumulation: horse, wheel and wheeled vehicles, importation of rare metals like copper and tin from distant locations to make bronze. Time of unprecedented concentration of power and wealth in the hands of the few. The Yamnaya largely displaced the farmers of northern Europe as well as the hunter-gatherers of central Asia and the east.

A 2003 study under Christopher Tyler-Smith showed that one single male who lived in the Mongol period left many millions of descendants (with the same Y-chromosome sequence) in the lands once part of the Mongol empires. Who other than Genghis Khan himself? He called this phenomenon a "star cluster" - which reflects extreme inequalities in the past.

Examples: Encounter of Bantu men with Pygmy women, Bantu dominate; in South America some populations show from their DNA that they descend from European men and Native American women; in India males of West Eurasian ancestry monopolised lower-ranking females.