Local tradition recorded by Diodorus claims that the Persian satraps of Cappadocia were descended not only from one of the "seven" who helped Darius become Great King in 522 BC, but also from Cyrus himself. True or not - and probably not - Cappadocia certainly identified very strongly with the Achaemenids. The last satrap, Ariarathes became king Ariarathes I in 331 BC of an independent Cappadocia. He alleged descent from Pharnaces who had married Atossa, daughter of Cyrus the Great. However, the territory was reclaimed by Macedon under Perdiccas, and remained under their control until 301 BC, when Ariarathes' son, Ariarathes II was allowed by the Seleucids to reclaim the southern part of his father's kingdom - the Black Sea coastal area having become the Kingdom of Pontus. His dynasty (the Ariarathids) continued to rule until the Roman takeover in 17 AD, and several kings made marriage links with the Seleucids (eg Ariarathes IV -220 - 163 BC married the daughter of Antiochus III (the Great). 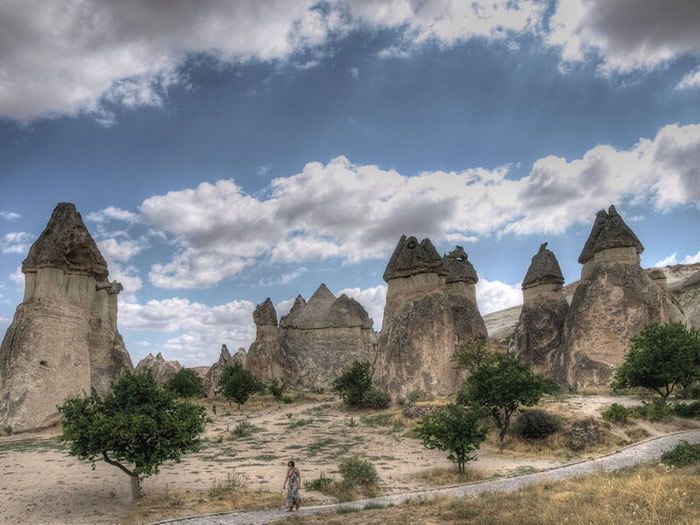 "Fairy Chimneys" in Cappadocia. Cappadocia is a popular tourist destination in Turkey, because of its strange geology, underground cities, and rock-carved churches and monasteries.

King Archelaus (36 BC - AD 17), the last of the dynasty, linked his genealogy to both Achaemenids and Macedonians, and to Heracles, for good measure. Strabo, who was born in Pontus just to the north, writing around the time of Augustus, notes Persian religious customs surviving in his own time (c. 63 BC - c. AD 24).

In Cappadocia...the Persians have also certain large shrines, called Pyrotheia [ie places where fires are lit, fire-temples]. In the middle of these is an altar, on which is a great quantity of ashes, where the Magi maintain an unextinguished fire... These we have seen ourselves.

The later Ariarathids tried to back winners in the struggle between Rome and the Seleucids: when they finally chose Rome it ended in disaster in 130 BC, leaving Cappadocia exposed to the expansion of Pontus under Mithradates VI, and after his defeat, the expansion of Armenia under Tigranes. Pompey restored king Ariobarzanes (63 BC), but received no loyalty in return, with Cappadocia once again trying to pick the winner in the Roman civil wars. Allowed to remain independent by Augustus, it was finally made a Roman province in AD 17, when Tiberius summoned Archelaus, the Cappadocian king for 55 years and accused him of plotting revolt.

Cappadocia became a convenient buffer against the Parthians and also helped keep an eye on Armenia, with three legions stationed there permanently. Right through the early Byzantine period the peace was kept - but Cappadocia fell to Khusrau II in AD 604, until the Byzantine counter-attack in AD 622.

An Achaemenid satrapy which tried hard to preserve its Persian inheritance. Despite falling to Alexander, it retained its independence for 300 years. Inevitably, though, it eventually succumbed to the power of Rome. 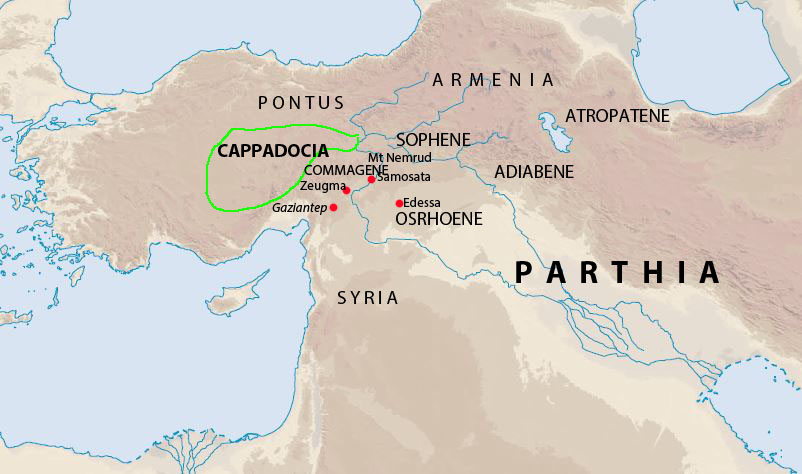