The territory referred to as Chorasmia was centred on the fertile lands south and east of the Aral sea and along the Amu Darya (Oxus to the Greeks); that is it's the eastern part of Eranshahr ("East Iran"). It straddles modern Uzbekistan, Turkmenistan, northeastern Iran itself and the northwestern part of Afghanistan. Not a very precise territory, in other words! It's also known as Choresmia, Khorasan, Khwarezm... Contrary to Greek expectations of desert, it was a fertile and prosperous region. It does not correspond to the present-day Iranian province known as Khorasan. The map on the right is, like this attempt to define Chorasmia, only a very rough approximation.

There was a legendary "Kingdom of Chorasmia" between the Caspian and the Hindu Kush: archaeology though shows no evidence of anything beyond the Scythian/Saka culture known as the Oxus Culture (or BMAC). It was one of the several territories claimed as the birthplace of Zarathushtra (Zoroaster), and also as the original home of the Avestan texts; although in the Iranian National History it is "Turan" the traditional enemy of Iran. Inscriptions show it had its own language - related to other Iranian languages.

Darius I to Darius III

It's mentioned as one of his satrapies by Darius on the Bisitun inscription (522 BC), and may have been one of Cyrus' late acquisitions before his death at the hands of the Massagetae: according to Ctesias, on his deathbed, he appointed his younger son Bardiya as satrap of Chorasmia, along with his other eastern conquests. Along with Parthiya it provided a useful 40,000 troops to Xerxes, although they were among those who took no part in the battle of Plataea (479 BC). Chorasmia was the source of turquoise for Darius' palace at Susa, which was probably always an important export. By the time of Darius III, however, it would seem to have become independent. No troops were sent to help against Alexander.

The breakaway of Chorasmia supplies an early precedent for the revolt of Parthia a little later. By the time of Alexander's appearance (328 BC), the king, according to Arrian, was in confident mood:

Meanwhile there arrived at Alexander's headquarters Pharasmenes, the king of the Chorasmians, with 1500 horsemen. He said he lived next to the people of Colchis and the Amazon women…

… and he offered to show Alexander the way and help him conquer the lands to the east of the Black Sea: Alexander said he was concentrating on India, but he'd get round to it once he was master of Asia. He made a pact with Pharasmenes, although he'd supported both Bessus and Spitamenes against him. 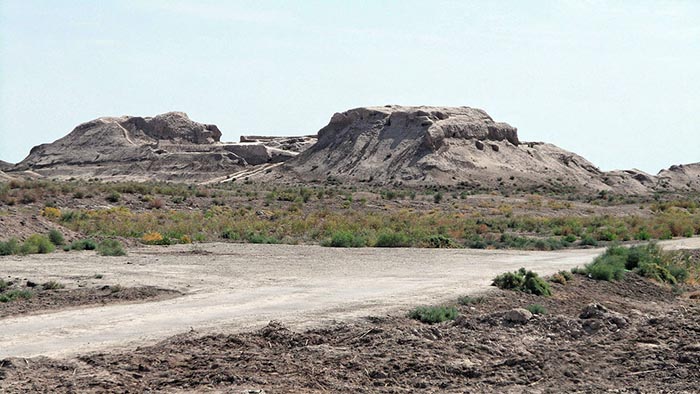 Chorasmia remained independent of Alexander, and the Seleucids - and in fact was not reintegrated into the Iranian world until the Sasanians. The kings issued their own coinage from about 100 BC, and royal tombs have been excavated at Topraq Qala and Ayaz Qala (near Khiva). There's archaeological evidence for considerable economic growth from around that time (the building of a huge palace at Topraq Qala, together with a large residential area and temples), and also for Zoroastrian worship. After coming under Sasanian rule, it again became independent from AD 305 under the Afrighid dynasty. Chorasmia was partially conquered by the Arabs in AD 712, but its committed Zoroastrians resisted the Muslim religion for a long time, and the Afrighids continued to rule (what was now called Khwarezm). They eventually converted to Islam, but were conquered by their neighbours from Gorgan the Manunids in 995. Subsequently Khwarezm was ruled by the Samanids - under whom culture flourished magnificently - and then passed into the domains of the Turkic Ghaznavids and thence to the Seljuqs.

Gradually the term Khorasan began to be applied to virtually the whole of East Iran - the former territories of Bactria, Arachosia, Gandhara, Parthia and Sogdia - as it developed its own distinctive and coherent identity. It was from Khorasan that the Abbasid revolution emerged - and Khorasan remained dominant in the Islamic world of East Iran and Central Asia until the focus moved back westwards under the Safavids. The Mongolian Timurids' descendants, the Mughals, extended the Khorasani legacy into India. 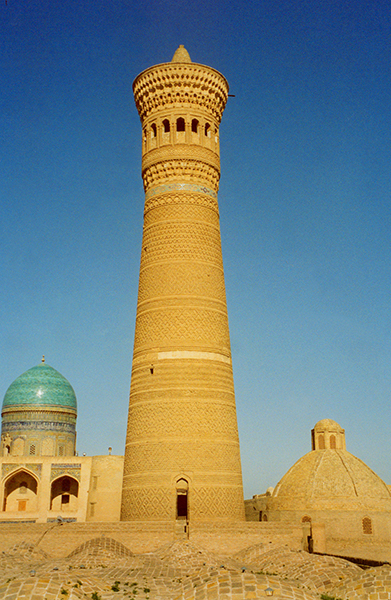 The 45m tall Kalyan or Great Minaret, Bukhara, Uzbekistan. It's part of a mosque complex that could hold 12,000.

From Khorasan, what's been called a "Persianate" culture spread across Eurasia, between around 800 until around 1900.

From The Persianate World: The Frontiers of a Eurasian Lingua Franca, ed Nile Green (University of California 2019)

"For the many Muslims who dwelt from the Volga basin up to Siberia and down into Eastern Turkestan, it was Transoxiana (specifically Bukhara) that was long seen as the fons et origo of Persian learning. Similarly, Timurid Herat and Samarqand were the most influential Persianate role models of the elites of the Ottoman and arguably also Mughal empires.

"By the fifteenth century, having gained written form as a fashionable patois of the court poets of tenth-century Bukhara, Persian had become a language of governance or learning in a region that stretched from China to the Balkans, and from Siberia to southern India. As a lingua franca promoted by multi-ethnic and multi-religious states, and aided further by education and diplomacy, Persian reached the zenith of its geographical and social reach between the sixteenth and eighteenth centuries. Then, from the early nineteenth century on, it was undermined by the rise of new imperial and vernacular languages. By around 1900, the language, which had once served to connect much of Eurasia, had retreated to Iran and neighboring pockets of Afghanistan and Central Asia, where it was refashioned into the national languages of Farsi, Dari, and Tajiki.

"For centuries, people from across India, Central Asia, and even Siberia looked to Balkh-i Bami (Balkh the Ancient), Bukhara-yi Sharif (Bukhara the Noble), or Hazrat-i Dilhi (Delhi the Sacred), as the center of Persian learning, rather than to anywhere in Iran. 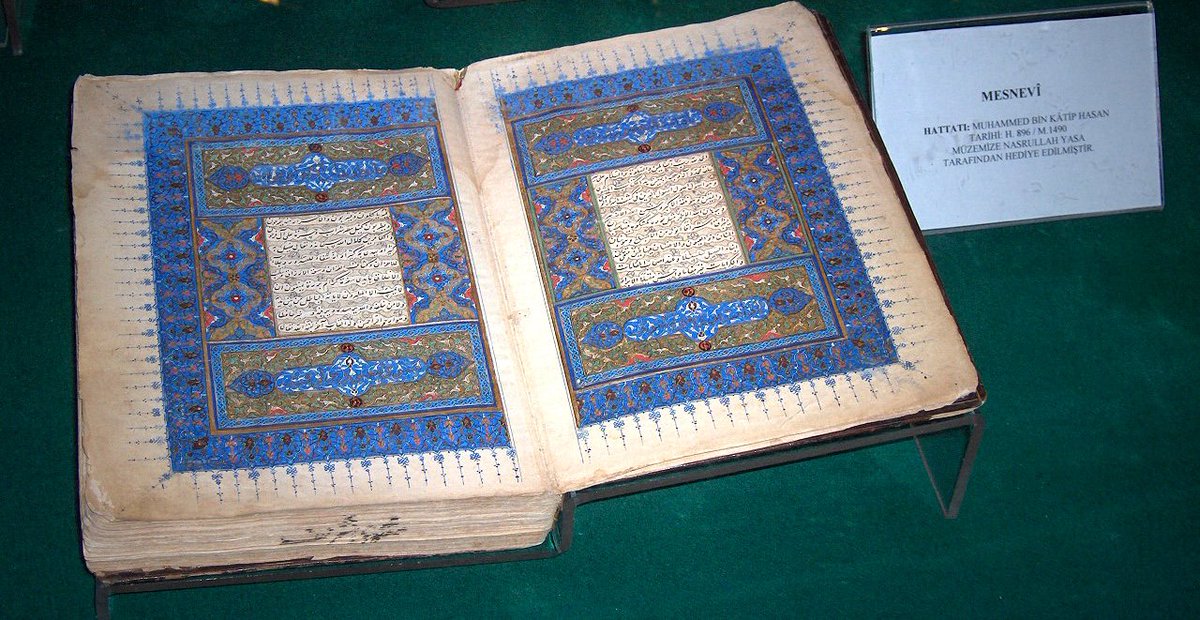 Beautifully illuminated 15th century production of the best-known poetic creation of Jalal ad-Din Muhammad Rumi, the Mesnevi, or 'Spiritual Couplets' - 27,000 of them, written in Persian with internal rhymes. Rumi (=of Rum, Anatolia) embodies the cosmopolitan "Persiate" Central Asian. Born in Balkh (Afghanistan), he became a poet in Nishapur, travelled to Baghdad and throughout the Middle East, settling finally in Konya (Turkey), where this copy of his poem can be seen.

OTHER PARTS OF THE EAST?

The map below shows very approximately the region known as Chorasmia in the ancient world. 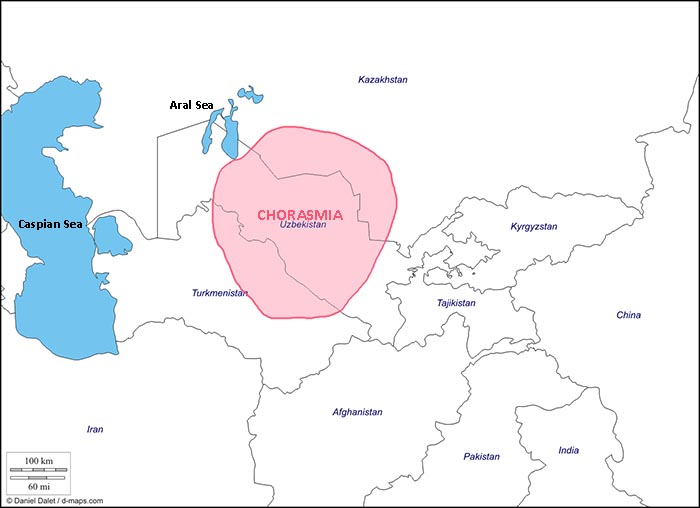 The term "Persianate" was first coined in the 1960s by the world historian Marshall Hodgson in his Venture of Islam. Hodgson explained and defined the term as follows: "The rise of Persian had more than purely literary consequences: it served to carry a new overall cultural orientation within Islamdom. . . . Most of the more local languages of high culture that later emerged among Muslims likewise depended upon Persian wholly or in part for their prime literary inspiration. We may call all these cultural traditions, carried in Persian or reflecting Persian inspiration, 'Persianate' by extension. [The Persianate World ed Nile Green]