Once he’d seized power and consolidated his grip on it, Darius still had a massive task ahead of him. But he seems to have realised what was needed to control his vast territory, the largest empire yet seen, involving three continents, many different peoples who differed in race, culture, language and religion, and huge distances. Five principles seem to have been crucial:

Headless statue of Darius made in Egypt and found in Susa. Tehran Museum. Photo AMW

Here are some of the ideas which helped him cope:

Darius delegated regional power to satraps, who had complete authority in their own satrapies (provinces such as Media, Lydia, Bactria). Satraps relished their independence, and frequently rebelled: such a rebellion had nearly destroyed Darius' Khshassa (Empire) right at the beginning of his reign in 522 BC. Sometimes local kings were allowed to carry on - hence Darius' title as 'King of Kings'. The empire was organised into 20 satrapies - Darius was proud that he ruled an empire containing "all nations and all languages".

Darius introduced a script for the Old Persian language (Aryan) he spoke using cuneiform characters. It was used only for his record of achievements in the inscription at Bisitun and elsewhere, alongside the well-established Elamite and Babylonian. But subject nations were allowed their own languages and scripts (eg Hieroglyphics in Egypt). Aramaic, originally the language used by scribes from Syria, became the lingua franca of the Persian empire, understood from the Aegean coast to India.

Darius organised the building of Royal Roads, often paved, so that messengers and officials could move across the empire as fast as possible. Herodotus:

There are royal staging-posts all along the road, and numerous excellent inns.

The king’s orders could be sent along these roads using the world’s first ever postal system. Herodotus describes it:

There is nothing in the world of men that can travel faster than these messengers. It's a Persian invention, and it works like this: they say that horses and riders are on standby for each day of the projected journey, throughout the entire distance to be covered. Neither snow, nor rain, nor heat, nor darkness stop them completing their leg of the journey in the fastest possible time. The first rider hands the message over to a second, the second to a third, and so on, just like the relay races with torches that we have in Greece at the festival of Hephaestus.

A message could travel from the capital to the coast - about 2,000 miles - in about a week, compared with an army which would take 3 months. Tickets were issued to all official travellers and their animals for free food on their journey. 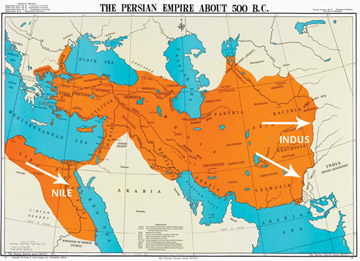 Darius' ships could sail from the Mediterranean to India

Herodotus has a tantalising section on Darius’ interest in India/Pakistan:

Darius wanted to know where the Indus river flows into the sea. He sent boats to find out the truth. They sailed eastwards down the river, and through the sea, westwards. After they had sailed round, Darius conquered the Indians and made use of this sea.

We’d love to know more about how he “made use of this sea”. No more is known about his conquest of India. Darius celebrated another achievement with a number of granite pillars on the banks of the Nile:

King Darius says: I am a Persian. Setting out from Persia, I conquered Egypt. I ordered this canal dug from the river called the Nile that flows in Egypt, to the sea that begins in Persia. When the canal had been dug as I ordered, ships went from Egypt through this canal to Persia, just as I intended.

Herodotus says that Darius's canal was wide enough for two triremes to pass each other rowing with oars extended. It took four days to go through.

Darius fostered the universal rule of law through two principles: Arta: "order based on truth", which the king maintained on behalf of Ahura Mazda, and Data, the idea that individual nations could decide their own laws, which were then codified by royal decree. Thus, for example, the Jews were bound by their own Biblical law code. Darius made the Egyptians codify their ancient laws, which were then upheld by royal authority. Herodotus reports the Persian abhorrence of lying, confirmed by Darius' epitaph.

Darius standardised weights and measures throughout his empire. Taxation was fixed for each region (less for Iranian lands), with incentives for farmers, and exemption for those who developed unused land. He initiated a banking system, and created a merchant navy. But the most useful invention was to have a single currency through all his territories. It was astonishingly simple: there was just one gold coin - named “daric” after him - which was accepted everywhere, and one silver, the shekel, worth 1/20th of a daric. A daric equated to a soldier's monthly wage. Some kings were allowed to mint their own silver coins - to their own design, but the daric was the only gold coin allowed. 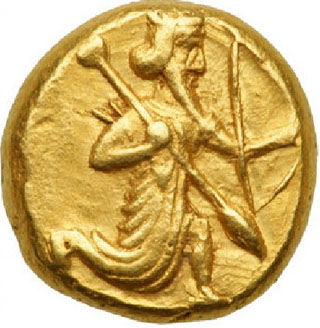 Daric, showing a crowned figure, running, armed with a spear and bow and arrows

Darius seems to have believed that he had been chosen by the god Ahura Mazda to bring justice and stability to the world (a belief that may have been shared by his predecessor Cyrus, although we know very little about Cyrus’ beliefs). Ahura Mazda was the chief god of the Zoroastrian religion, a faith which seems to have originated in eastern Iran. It’s quite unclear, though, whether Darius was a Zoroastrian, or whether he simply adopted Ahura Mazda as the royal family’s god. Certainly Zarathushtra, [Greek Zoroaster] gets no mention in his inscriptions.

NEXT: DARIUS AND AHURA MAZDA

Holding on to power

Darius is ruthless in seizing power and crushing resistance. But he holds on to power through skillful administration of his vast empire.

He leaves government of various regions to satraps (often members of the royal family), he builds roads, and standardises weights, measures and coinage.

He professionalises the army - preferring troops from his Iranian satrapies, and especially from Persis itself. The elite "Immortals" were 10,000 Persian infantrymen who showed total loyalty to successive Achaemenids.

He claims to owe his success to a god - Ahura Mazda (The Wise Lord). 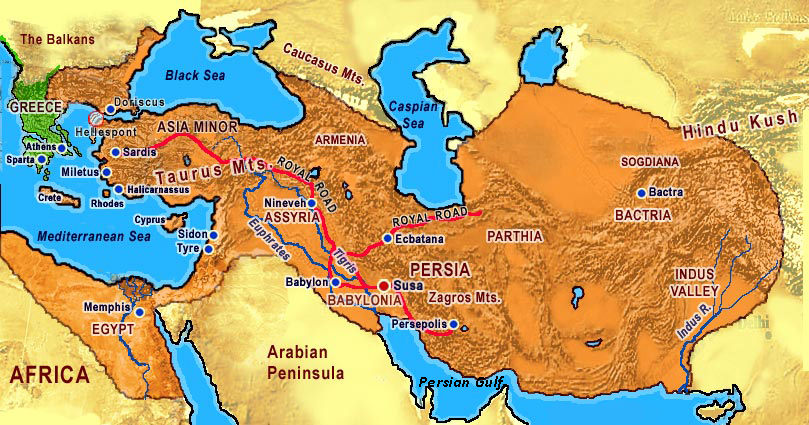 The Persian empire under Darius I

Originally 3 metres tall, this granite statue was made for a temple in Egypt: an inscription on it in Egyptian hieroglyphs says "..Darius the king ordered this statue to be made so that those seeing it will know that the Persian man has taken Egypt." Later it was shipped Susa - possibly when the Egyptians rebelled against Persian rule under Xerxes. It was set up by the gateway to the royal palace in Susa, where it remained until it was discovered in 1972. It's badly damaged - partly by natural causes (the big visible crack - and the loss of the head portion), but partly by ancient vandalism - it was used for target practice and its Egyptian inscription was defaced by someone who understood what it meant. See here.

The Greeks believed that Persian kings had officials based in the satrapies called “The king's Eye” and “The king's Ear”: their job was to spy on their satrap and report back to the Great King. They found the idea of a man called the King's Eye very funny - a man dressed up as an eye appears in an Athenian comedy. Unfortunately there is no Persian evidence for the existence of such officials.

Neither snow, nor rain ..

The snow, rain, heat bit was adopted as the motto of the US Postal Service .

Many of the baked clay tablets in the Persepolis Fortification Archive record allowances made to individuals for travel. More later.

This linked the Nile with the Red Sea, not , as does the modern Suez Canal, with the Mediterranean directly. It was a project begun about 600 BC by the Egyptian Pharaoh Necho, but never finished, although there is evidence that a canal may have existed much earlier, possibly since 1800 BC. Necho may have been reconstructing a very ancient project. 120,000 men died working on Necho's scheme according to Herodotus. The total distance (including lakes) was 114 miles.