The religion of Darius the Great

Was he a Zoroastrian?

Zoroastrianism remained the religion of Persia (at any rate of the rulers) until the Arab conquests in the 7th century AD. There are still Zoroastrians in Iran and elsewhere, especially in India where they are known as Parsis (or Parsees, ie Persians), but their present-day beliefs and worship can’t tell us much about the religion of Darius and the Achaemenids. One certain thing is that it’s changed a lot in 2,500 years

The Zoroastrian creed (in Avestan "Humata, Hukhta, Huvarshta" ) 'Good thoughts, good words, good deeds'. No Zoroastrian scripture was written down until the Avestan script was devised for that purpose, from the 3rd or 4th century AD.

The Achaemenids tell us how much they appreciated the god Ahura Mazda, but very little about him. For example:

I am Darius, the great king, king of kings, king of countries, son of Hystaspes, the Achaemenid.
Darius the king proclaims: Ahura Mazda is mine; I am Ahura Mazda’s; I worshipped Ahura Mazda; may Ahura Mazda help me.

From this we can learn a few things:

This is what Herodotus has to say about Persian religion:

It is not their custom to erect statues of their gods, or build temples or altars. They say that people who do this are fools, because, as I see it, unlike the Greeks, they do not believe their gods human-like. They climb to the tops of mountains to sacrifice to Zeus: Zeus being what they call the complete circle of the sky [ie Ahura Mazda]. They also sacrifice to the sun [Mithra], moon, earth, fire, water, and winds... Later they learned to sacrifice to worship Aphrodite Urania [Anahita].

Someone sacrificing can't just ask for good things for himself. He has to pray for the Persians as a whole (this includes him, of course), and for the king...

They never have a sacrifice without a Magus, who chants hymns about the origin of the gods...

Each man marries many wives, and has many concubines in addition. Apart from prowess in battle, a man proves his worth by the number of sons he has. Every year the king gives prizes to the men who have the most...

Education, from ages five to twenty, concentrates on three things: horse-riding, shooting the bow, and telling the truth. A boy doesn't see his father until he is five; he lives with the women. This is so that his father will not be distressed if he dies...

They do not urinate or spit in rivers, or wash their hands in them, or allow anyone to do so. They revere rivers especially.

So far I have been reporting what I know; but the rites of the dead are secret. For example a Persian's body is not buried until it has been mauled by a bird or a dog...

Another Greek, Plutarch, writing at least 600 years later, has this to say:

This [that god and evil are part of nature] is what the majority of intelligent people believe. Some think there are two gods working against each other, one the creator of good things, the other of bad. They call the better one “god”, the other one “devil”[demon], as does for example Zoroaster, the magus, who they say lived 5000 years before the Trojan War. He called the good one Horomazdes, the other Areimanios, and he revealed too that the former more closely resembled light than anything else in the world of the senses, the latter darkness and ignorance...

Study these passages closely. Herodotus tells us what they did and didn’t do (remember he’s writing for Greeks, whose religion was quite different), Plutarch (writing in Roman times for people interested in religion) tries to convey what they believed.

It’s not easy to check on the Greeks’ ideas about Persian religion (why not?) but by using other evidence, especially archaeology, we can show some of them to be right or wrong:

1. Temples. No Achaemenid temple to Ahura Mazda has yet been found, nor have any statues. 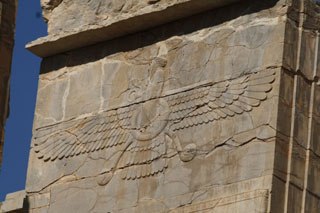 This image - used as a symbol by modern Zoroastrians - is often found hovering above an image of the king. It shows a disc, probably representing the sun, with wings, and a human figure emerging from it. It’s probably not a picture of Ahura Mazda, but is intended to indicate his presence wherever the king is, to bring him guidance and success.

2. Worship of and respect for the natural world is confirmed in other writers. Fire was especially important, as on this seal found at Persepolis showing priests at a fire altar: 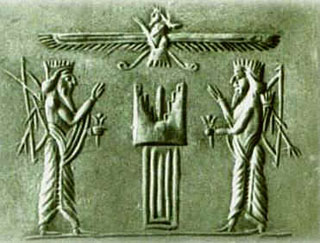 Later Zoroastrians avoided polluting nature. Dead bodies were left in high remote places for vultures and crows to “recycle”, a tradition which was maintained until recently. Later they used purpose-built "Towers of Silence", such as the one outside Yazd, central Iran.

Click here for more on Yazd and its Towers of Silence

I was not a follower of the Lie. I was not an evil-doer, neither I nor my family. I acted according to righteousness. Neither to the powerless nor the powerful did I do wrong.

Zoroastrians believe that in life mankind has to choose constantly between “The Lie” and “The Truth”- part of the struggle between darkness and light (see below). But Herodotus is trying to contrast the Persian hatred of lying, with the relaxed Greek attitude: one of their greatest heroes was Odysseus, the master liar.

4. A Magus was a kind of priest or religious expert. Well known are the three Magi (or Wise Men) who came to visit the infant Jesus in Bethlehem (in 4 BC). There seem to have already been Magi before Darius adopted Ahura Mazda as his god - but it's odd that the impostor who Darius says he killed was a Magus (see previous section).

5.“Not buried before it is mauled by a bird or dog” Has Herodotus got wind of the burial practice mentioned above? There’s no other evidence associating later Zoroastrian funerals with the Achaemenids. Cyrus was given a house-like tomb, and his successors were entombed in specially constructed chambers high up on a cliff face (picture above). 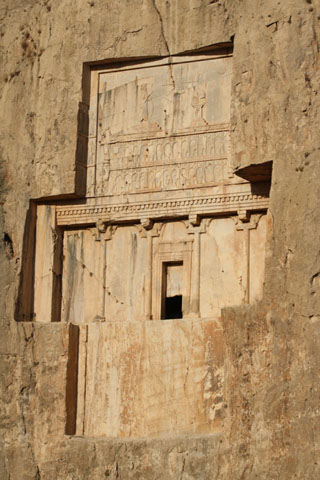 One of the Achaemenid tombs at Nasht-e-Rustam

6.Plutarch’s information comes from long after the Achaemenid period, and is more likely to refer to later beliefs. Later Zoroastrians believed in the eternal struggle between good and evil, light and darkness. Horomazdes is obviously Ahura Mazda, and his opponent Areimanios is better known as Ahriman (or Angra Mainyu). Ahura Mazda is not all-powerful, therefore. He has to inspire mankind to resist Ahriman, and turn away from evil. Zoroaster (Zarathushtra in Persian) was the mysterious founder of the religion. Plutarch calling him a Magus probably just means he was a holy man. When he lived is unknown, but it probably wasn’t as far back as Plutarch reckons. 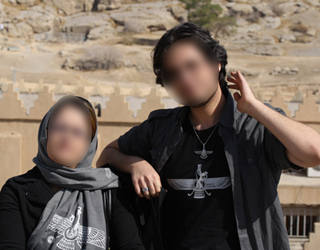 Present day Zoroastrians in Iran. The woman's scarf and the man's T-shirt show the Faravahar
emblem, believed by Zoroastrians to be a depiction of a fravashi, an individual's guardian spirit.

Avestan khwarenah, which became khwarr in Pahlavi and farr in Persian - meaning the splendour or glory that attaches to an individual on whom authority has been conferred - is seen by some as having been adopted by Darius (from earlier Iranian religious ideas) [see also here], and becoming a constant motif in Persian religion, discernible in Sasanian Zoroastrianism , the "Light of His glory" in Islam, and in the Baha (glory, splendour, light) in the Baha'i faith founded in the 19th century.

NEXT: DARIUS' WEALTH AND LIFESTYLE

Darius believed that Ahura Mazda had helped him win power and keep it. Ahura Mazda was the chief god of the followers of Zarathushtra (Zoroaster)- a mysterious religious teacher asociated with eastern Iran. We don't know when (or even if) he lived - but hymns composed by him were passed down by word of mouth until they were finally written down in 3rd or 4th century AD. See here

Does that mean that Darius was a Zoroastrian? Not necessarily. The fact that he and his successors were buried in tombs shows that they didn't follow Zoroastrian burial customs. Other dieities are allocated offerings according to the Persepolis Fortification Archive. It's better to use the term Mazdaism for the religion of the Persians - at least until the 3rd century AD, when the earliest Avestan texts appear.

Notes can all be found beneath the main text on this page.

The Glaswegian dance-rockers brought out a new album in 2014 - called "Right words, right thoughts, right action". Did they know its significance? 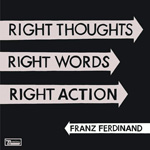