A small kingdom (often known after its capital, Edessa; now Urfa or Sanliurfa in Eastern Turkey) between Adiabene and Commagene. Its borders were the Euphrates on the west, the Tigris on the east, and the Taurus mountains on the north.

The city of Edessa was founded on an ancient site by Seleucus I in 304 BC, but broke free from the Seleucids in 132 BC, shortly before the Arsacid conquest, under a dynasty of Nabataean Arabs, originally from the region of modern Jordan. It remained nominally part of the Parthian empire until Pompey's arrival in 64 BC, when it became part of the Roman sphere. However, the city always looked east rather than west. Despite its Greek name (Edessa after the ancient capital of Macedonia it was thought by Seleucus's men to resemble because of its abundant water supply), its people spoke Aramaic, the common language of the Persian empire, not Greek, and were hostile to both Greeks and Romans - not helped when the city was sacked by the Roman emperor Trajan in AD 116 and again by Lucius Verus during campaigns against Parthia. From then on Edessa had no choice but to endure Roman rule. Osrhoene must have hoped for a friendly emperor when they supported Pescennius Niger, governor of Syria, in his bid for power. But his rival Septimius Severus won - and Edessa was sacked again in AD 195, as depicted on the arch of Septimius Severus in Rome.

It was at the Battle of Edessa in AD 260 that the Romans suffered their greatest humiliation since the Battle of Carrhae in 53 BC - not far from Edessa - where the emperor Valerian was taken prisoner. The Romans maintained their interest and influence however: but it fell briefly to Khusrau II in AD 609 shortly before the Islamic conquest in AD 638.

According to legend (no earlier that the 3rd century AD), one of its kings, Abgar V (4 BC- AD 7 and AD 13-50) was the first ever Christian king. According to the story (in the Doctrine of Addai c AD 400) King Abgar was suffering from leprosy (or gout?) and wrote a letter to Jesus, asking if he'd come and cure him. Jesus wrote back that he didn't have the time, but sent a picture of himself and promised to send a disciple to do the job. He sent Addai or Thaddaeus, one of the 72 disciples (not one of the inner 12) and Abgar converted. It's very unlikely to be true, however. But by the 3rd century AD Edessa was a thriving Christian community - proud of its letter from Jesus and his portrait. For more on this quaint legend see 'Mandylion' in Wikipedia. 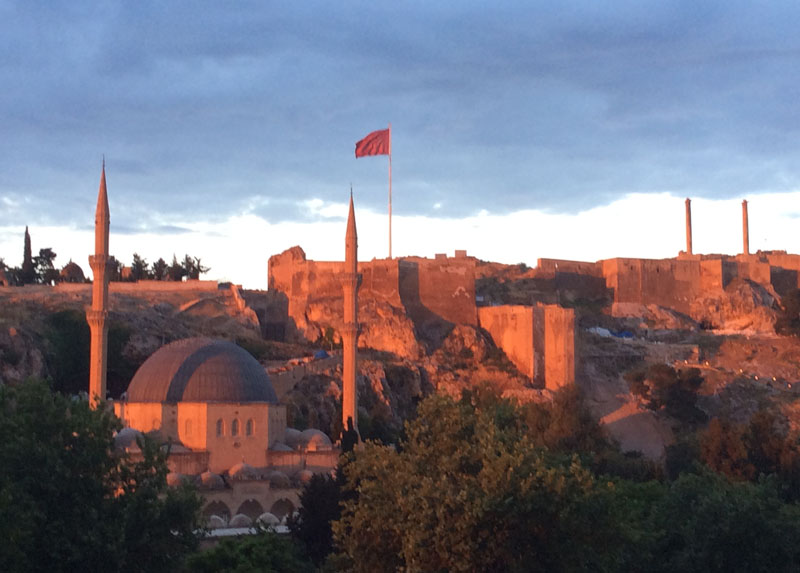 Sanliurfa: the citadel at dawn. The twin towers are on the right. Photo AMW

Prior to the conversion to Christianity, there had been a cult of the "mermaid" goddess Atargatis, involving sacred fish.

I saw a statue of Derketo (Atargatis) in Phoenicia, an amazing sight. Half was a woman, but from thighs to feet stretched out a fish tail ... they consider fish a sacred thing, and never touch fish.

The fish are still there, but since the arrival of Islam, who identified the town (Urfa) with the Biblical Ur of the Chaldees, they've been associated with Abraham (Ibrahim). The patriarch was supposedly born in a cave in Edessa. The evil ruler Nimrod, using the twin towers (still dominant on the citadel in Sanliurfa) as a catapult, shot the infant into a fiery pit at the bottom of the hill. This was miraculously turned into a pool, and the blazing logs into fish. Today the pool is teeming with well-fed carp. Anyone eating one goes blind, apparently. Fish in the Pool of Ibrahim. Photo AMW

Culturally inclined to the east (and a Christian kingdom from early times) but forcibly within the orbit of Rome for most of its history. Its kings were Arabs and its language was Aramaic/Syriac. 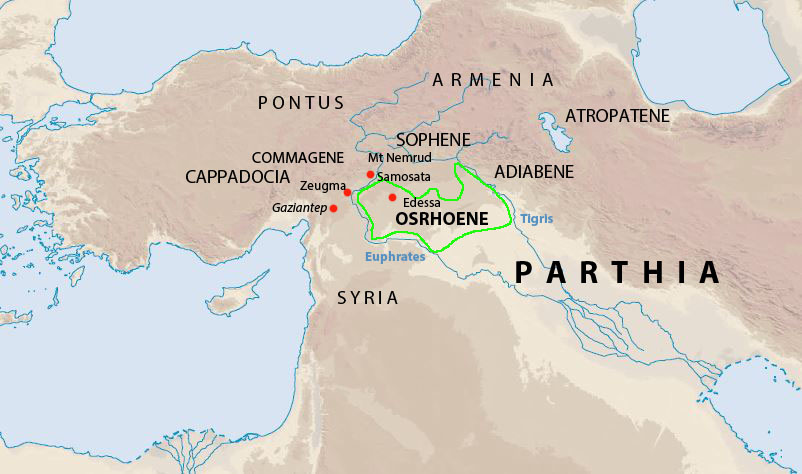 Osrhoene- between the Euphrates and the Tigris

The Abgarids ruled from 132BC until AD242, although in 214 in the reign of Abgar IX, the terrritory became a Roman province.

Aramaic, not Greek was used on Edessan coinage except by Abgar IX.

Xenophon (Anabasis 1.4.9) when mentioning the river Chalos, says "it is full of huge tame fish, which the Syrians claim are divine, and do not allow people to harm them."