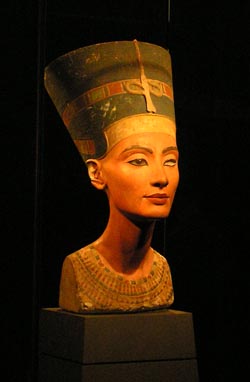 The land of Egypt would always have been a barren desert, were it not for the river Nile, whose floods make agriculture possible on a strip of land either side. This annual flooding was seen as a gift from god. Exploiting the flood required organisation and control: this was exercised from around 3,500 BC by a succession of god-kings - the pharaohs. Egypt was always exceptional - nothing about its politics, economics or even religion could appropriately be copied elsewhere: though its accumulated wealth made it constantly attractive to foreign invaders.

In the 6th century BC it had attracted the newly-emerging power of Persia: it was conquered by Cambyses in the 520s BC. In 464 BC there was a brief period of independence, encouraged by the Athenians. Persian rule resumed, but came to an end in 332 BC when Egypt was conquered by Alexander of Macedon. Macedonian rule continued under the family of Alexander's general Ptolemy until 31 BC, when Cleopatra VII and her Roman ally Antony were defeated by the future emperor Augustus at the Battle of Actium. Rome, and later Byzantium, for whom Egypt became a vital bread-basket, ruled until the Arab conquest in AD 642, although the governing elite remained predominantly Greek. The city of Alexandria (founded by Alexander) became the most important port in the eastern Mediterranean, and the greatest Greek city. Non-Greeks (including the large Jewish community) were denied citizenship, but with its Museum and Library it became the main hub of Greek culture - including in later times Christianity. Egyptian Christians (Copts) did not accept the decision of Chalcedon and, as miaphysites, remained heretical in the eyes of the Orthodox western church.

"Egyptians are weird": the Greek view

I shall have a lot to say about Egypt, because nowhere in the world are there such wonderful things, such fantastic monuments. Many of their customs are quite different from what we are used to. For example, their women do all the buying and selling in the marketplace, while the men stay at home and do the weaving. Men carry loads on their heads, women on their shoulders. Women pee standing up, while men pee sitting down. They pee indoors and eat outdoors, believing that private, necessary things should remain private, while others can be done openly. Sons are not made to support their parents, but daughters have to, whether they want to or not.

All over the world priests have long hair; in Egypt they are shaven-headed. They only grow their hair and beards long when they are in mourning for the dead. The Egyptians are the only people I know who let their animals live with them in the house. The Greeks write from left to right, whereas the Egyptians write from right to left. They reckon their method is easy and correct and ours is cack-handed and awkward. They use two kinds of writing: hieroglyphics or sacred writing, and demotic or everyday writing. They practise medicine by means of specialists, some dealing with eyes, some with teeth, some with the stomach, and so on.

Herodotus goes on to describe Egyptian burial customs, including a very accurate description of the process known as mummification which evidently fascinated him - the Egyptians were very peculiar indeed!

After mourning the dead person, the relatives take the body to be embalmed. The specialist embalmers show the relatives the different services available, from the most expensive to the cheapest. The most expensive method involves removing the brain through the nose with a hook, cutting open the abdomen and removing the intestines, filling the body with spices and embalming it in sodium nitrite for seventy days. After that they wash the body and wrap it in fine linen bandages stuck together with gum. Then they return the body to the relatives, who have a wooden coffin made for it in the shape of a man, which is shut up in a burial chamber, standing upright against a wall.

The centralised kingdom of Egypt, which flourished from the 4th millennium BC, used the Nile floods to create an uniquely succeful agricultural economy. But this success attracted invaders - Persians, Macedonians and Greeks and finally Romans who exploited Egypt's wealth for themselves.

The Coptic Orthodox Church of Alexandria dates its foundation from the arrival of St Mark, the apostle, in Egypt in AD 42. Approximtely 10% of Egyptians today are members of the church.