The Sasanians - end of an empire

The well-intentioned military reorganisation by Khusrau I - splitting the command between four generals, one spahbad for each of the four quarters of Eranshahr had unintended consequences. By the end of Khusrau II's reign it was clear that the situation was becoming very similar to what it had been in the final years of the Parthian regime. Local dynasts, some of Parthian descent, were looking after their own interests, consolidating their own wealth and power, and disregarding the central authority of the Sasanian kings. They were not very concerned about showing solidarity - even when faced by external enemies. Bahram Chobin was the first non-Sasanian (though he was of Parthian descent) to make the bid for supreme power. Others followed.

Kavad II had killed all his brothers. When he died, there was only his baby son available as a Sasanian heir, who very briefly became king of kings as Ardashir III. Shahrbaraz, Khusrau's sacked general took his chance, possibly encouraged by emperor Heraclius. He marched on Ctesiphon, killed Ardashir III and made himself king. It was all of a few months before he was murdered in turn. 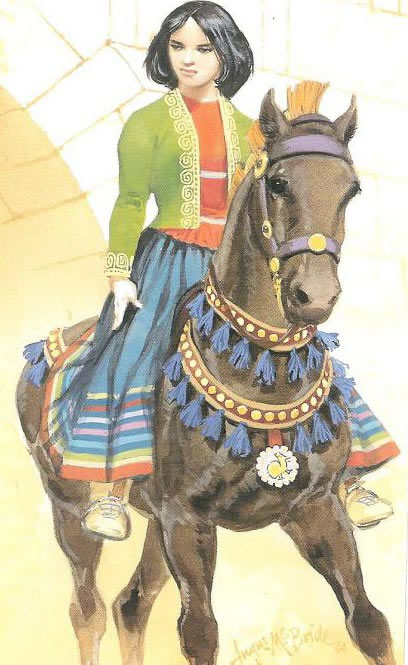 As there were apparently no male Sasanians left (Kavad II had murdered them all), the next ruler was a daughter of Khusrau II. Queen Buran (Burandukht) saw herself as restoring past glories. Her coins announce:

Buran, restorer of the race of gods 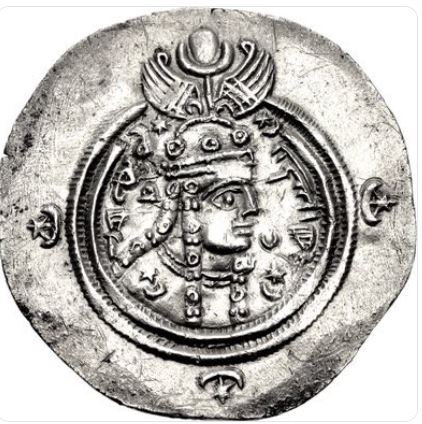 Her restoration was short-lived, deposed and probably murdered by another general, succeeded by another queen (her sister) - they came and went with embarrassing speed, rulers and wannabe rulers, some simultaneously, claiming different parts of the empire: Joshnabandah, Azarmidukht (Burandukht's sister, and general Shahrbaraz's widow), Hurmazd V, Khusrau III, Peroz II, Khusrau IV. All held power fleetingly somewhere, between 630 and 632.

Yazdegird III, a previously undiscovered grandson of Khusrau II, was put forward as king by the nobles, led by the spahbad Rustam. He was crowned aged 15 in the temple of Anahita at Istakhr, in Persis, from where the Sasanian dynasty had originated. Did they think the time had come to consolidate Sasanian rule in its traditional homeland? Yazdegird was characterised as a "wandering king", who controlled only the area where he happened to be basing himself. He needed to keep moving to ensure his rule was recognised. The empire was internally unstable, and elsewhere, events were moving fast.

Persia's long-term enemies, the Turks and the Byzantines, were no longer a threat. Exhausted by decades of warfare, with manpower and leadership seriously depleted, a long period of peace was needed for the army to rebuild its strength and confidence. Agriculture had been disrupted by war and natural disasters, and the ruling class was distracted by futile but fatal quarrels within itself.

This was the moment a new, unrated, force chose to strike. Their speed of action recalls Cyrus the Great's blitzkrieg in the 6th century BC.

How did it all happen so quickly? Many factors contributed to the whirlwind Arab success:

In Umar, the second caliph, the Arabs had found a leader of exceptional calibre.

The first caliph, Abu-Bakr, had declared that the Arabs were bringing a message from god, proclaiming equality and justice for all. This was great news for the minorities in the Sasanian empire (and in Byzantium) - the Miaphysite Christians, the Dyophysite 'Nestorian' Christians (Church of the East or Assyrians), Jews, Aramaic speakers, the Arabic peoples of Syria and Palestine, most of whom had no love for their remote and authoritarian governments. There was a popular slogan in Persia, once associated with the Manichaeans:

The Arabs were welcomed by the elements in Persia that had once supported Mazdak, especially the poor farmers trying to make a life for themselves despite fierce taxation. Many were happy to accept Arab rule and convert to Islam if it meant lower taxes. But it was among the huge number of Iranians enslaved by the Arab conquerors that Islam - and the Arabic language - spread most effectively. With Islam's message of equality, it was eventually impossible for the conquerors to remain an elite - as conquerors elsewhere mostly tried to.

Neither the Persians nor the Byzantines had good enough generals, and their armies were exhausted by decades (in fact centuries) of fighting each other, as well as Turks, Avars, Slavs, Hephthalites… even before the Sasanian take-over, the Parthians had been fighting Rome for 200 years. And recently the Sasanians had grossly over-extended themselves during Khusrau II's bid to recover Egypt and Anatolia. Both empires faced the threat of annihilation: the Byzantine empire survived the Arab attacks: the SasanianS didn't. The Arab historian Ibn Khaldun says:

When the Muslims took Ctesiphon, the whole Persian empire was dissolved, and the outlying provinces which remained in Yazdegird's hands were of no avail to him. By contrast, the centre of the Byzantine state was in Constantinople ... the loss of Syria did not harm them.

After the Battle of Qadisiyya in 636, it was every man for himself: once the king of kings had lost his centre of power and authority there was nothing to hold Eranshahr together. And, due to Khusrau I's army reforms, once the Mesopotamian army had been defeated, the whole empire was wide open. The recruitment of nomadic tribesman into the army also presumably undermied its coherence and competence, as was to happen later when the Abbasids began to rely on recruiting Turks. The individual provinces, however bravely they resisted, were picked off one at a time.

According to Abu Ali Bal'ami (d. 992/997), the great vizier and also historian of the Samanid Empire , the last Sasanian king Yazdegird III was a "burden" for the people of Merv. He travelled to the region with an entourage of 4000 persons including slaves, cooks, servants, his wives, concubines and the elderly and children of the Sassanian household without a single warrior and expecting the marzban (military and political commander of a frontier region) Mahawayh to provision this entourage. This enraged Mahawayh, who turned against Yazdegird and murdered him. The Arab Muslim historian Al-BAlAdhuri makes a similar claim, saying that the marzban decided to turn on Yazdegird after the Sh?h demanded to see his accounts. In both accounts the Sassanian king is portrayed as a "burden" and almost a "foreign ruler" with his hand out rather than an ally and friend of the Khorasani lords. 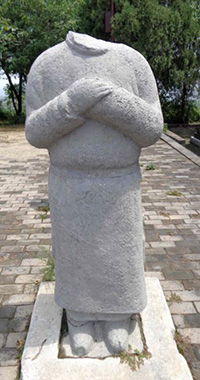 Yazdegird III was succeeded by his son Peroz III. Peroz (still only a boy) and the remains of the Sasanian court eventually escaped into China, where he was given an imposing title and allowed to build a fire-temple (AD 677). His sister married the Chinese emperor, and the refugees were allowed to join the already-existing Iranian and Zoroastrian communities there. A reconquest was doubtless talked of, and even attempted, but no effective counter-attack ever took place.. His now headless statue, accompanied by an inscription on the back recording his title, can still be seen at the mausoleum of Tang Emperor Gaozong and Empress Wu at
Qianling. Peroz's son Narseh wrote about his father (in Chinese):

Peroz requested only a simple burial and the Chinese emperor approved. The entire exiled court was in attendance along with the Chinese emperor. The Chinese emperor held Peroz's shaking hands. Peroz looked west and said: "I have done what I could for my homeland (Persia) and I have no regrets." Then, he looked east and said: "I am grateful to China, my new homeland." Then he looked at his immediate family and all the Persians in attendance and said: "Contribute your talents and devote it to the emperor. We are no longer Persians. We are now Chinese." Then, he died peacefully. A beautiful horse was made to gallop around his coffin 33 times before burial, because this was the number of military victories he had during his lifetime. Peroz was a great Chinese general and great Persian prince devoted and loyal to his people.

The last Sasanian we hear of was Yazdegird III's grandson, Khusrau: according to Chinese sources, he invaded Persia with Turkish allies - but was unsuccessful.

The Arab conquest ended more than a millennium of Iranian domination of Iraq and the plateau. With the Arabs came Islam, which changed Iran for ever. Continue with the story of the Iranian peoples under Islam:

NEXT: THE ARAB CONQUEST - ISLAMIC IRAN

During the Sasanian period, as all memory of the Achaemenids and Parthians vanished, Iranian poets began to construct their own history - based on ancient Zoroastrian traditions. Darius and Alexander appear - transformed. The Sasanian kings do figure in something more like a historical narrative. As Iran succumbed to Arab rule and to Islam, these stories became more and more important to the survival of an Iranian identity - and form the core of the Shahnameh (The Book of Kings) begun by Firdowsi in the 10th century AD at the splendid court of the Iranian Samanids and completed under the equally splendid Ghaznavids, a dynasty of Afghan origin. Continue to the Iranian national history:

NEXT: THE ALTERNATIVE HISTORY

The weakened Sasanian empire - it must have been congratulating itself on winning a breathing space by forcing peace with the Byzantines in the west and the Turks in the east - was overrun in a few years by a new power. The desert Arabians had united under the prophet Muhammad, and were finally powerful enough to invade the rich and tempting territories to the north and east.

For earlier dealings between the Arabs and the Sasanians see here.

Khusrau's general - though scapegoated for the king's failures, had not in fact been defeated by the Byzantines, and had kept his army intact. He'd made a secret pact with Heraclius, and moved on Ctesiphon with the emperor's approval. Very possibly he'd even become a Christian. He married Azar (Azarmidukht), daughter of Khusrau II to give himself some pretence of a legitimate claim to the throne.

In the 1980s war with Iran, Iraqi president Sadam Hussein taunted Iran by referring to his war as "Qadisiyya". He also named the missile which he fired at Tehran the al-Hussein, after Hussein ibn Ali who was martyed by the Sunnis at Karbala in 680.

Kaveh was a mythical blacksmith who led opposition to the evil Arabian monster Zahhak, as handed down in the Avestan tradition - and appearing later in Firdowsi's Shahnameh. His blacksmith's apron became the banner of rebellion, and symbol of opposition to foreign rule. "Kaveh's Banner" was adopted by opponents of Arab rule, and later by Persian nationalists in the 20th century.

The Arabs helped themselves to Immense quantities of booty after the capture of Ctesiphon. According to al-Tabari, as well as Kaveh's banner, the Arabs took the massive 10,000 square foot Royal Carpet (which Umar cut up and gave pieces to the people). Thousands of Persian ladies were sent to Arabia and sold as slaves. For the first time the Arabs got a glimpse of the wealth and luxury of the Persian aristocracy.

The survival of the Byzantines

Constantinople was hard to reach and hard to capture. It had resisted all-comers since the great walls were strengthened by the Roman emperor Theodosius II (AD 408 - 450) - and was to carry on doing so until it finally fell to the Crusaders in AD 1203 - and it didn't finally give way until the sack by the Ottoman Turks in 1453. Ctesiphon had already proved vulnerable: once the Arabs had captured it, the defence of the Persian empire fell apart.