The Territory of ancient Gandhara today includes parts of northern Pakistan and eastern Afghanistan, including Kabul, Peshawar, Lahore and the Swat valley. Under the Achaemenids, it was one of the two Indian satrapies ruled by Darius I (hence also known by its hellenised Persian name, Paropamisadae - from the Persian meaning "beyond the Hindu Kush"), and was later part of Alexander's conquests.

The ruler of Taxila was very welcoming to Alexander, sending him bulls, sheep, silver and 30 elephants before he'd even crossed the Indus. Once over, he proceeeded to explore and be entertained in his host's huge mud-brick capital - squalid though it appeared to the Greeks. The customs of the Indians ("slim, tall and lighter than other men; wearing ear-rings; dying their beards"…) appeared strange to the Greeks (poor men having to sell their daughters, or give them as prizes in boxing-matches; and the custom of suttee).

But the most famous event was a meeting of philosophers: a pupil of Diogenes with a group of naked Hindu wise men. Despite (or because of) interpreters (and one of the Indian philosophers had no faith even in his own people, believing his ideas were too complicated for them to understand), they misunderstood each other completely: but this didn't prevent Greek stories of the naked philosophers of India from influencing western notions of them for the next 2,000 years (such as Churchill's unpleasant remarks about M.K. Gandhi). Taxila was already a university town (often said to be the world's first) although it was not yet the Buddhist centre it became later.

Alexander's victories (327 - 325 BC) undermined the small local states, whether kingdoms or republics, leaving them vulnerable to conquest by the Mauryas (321 BC). India made a big impression on Alexander and his fellow Greeks: he left little impression on India: he's not even mentioned by any Indian sources.

Gandhara was taken from the Greeks by Chandragupta, founder of the Maurya empire, but then, as the Maurya power waned, it became part of the Greco-Bactrian kingdom, and, in due course, when they were overpowered, of the Kushan empire. There was an interlude between around the beginning of the 1st century AD when Gandhara was part of the Indo-Parthian kingdom of Gondophares.

A distinctive Gandharan artistic style - a blend of Greek, Persian and Indian influences - began during the rule of the Kushans from around 50 BC. Under their greatest king, Kanishka (AD 128 -151) Buddhism flourished and contacts developed via Sogdia with China. The ancient city of Taxila (Takshashila) expanded hugely. From AD 241 Persian rule returned - interrupted by the Hephthalite Huns for a century (from around AD 450-560).

United again under the Gupta empire (AD 320 to 550), India began to export its culture and religion throughout Asia. Artists, sculptors, musicians, scientists, merchants, astronomers, architects, philosophers travelled along the various sea and land routes towards China and southeast Asia, spreading their ideas and show-casing their talents. Gandhara was a crucial staging-post on this journey.

The Indian Buddhist philosophy, founded back in the 5th century BC, was already a growing force. Soon it reached China, Tibet, Sri Lanka, Burma, Thailand, Laos, Cambodia - places where it is still important today (not so in its original homeland, though). In Gandhara and along the Silk Road Buddhist monks established large communities, and inspired the creation of mighty works of art, such as the Buddhas at Bamiyan, in Afghanistan, built in the mid 6th century AD and blown up by the Taliban in 2001. Archaeologists are currently (2015) working against time to excavate a huge Buddhist city not far from Kabul at Mes Aynak, which is also due to be destroyed - this time for a Chinese copper mine. Details here. 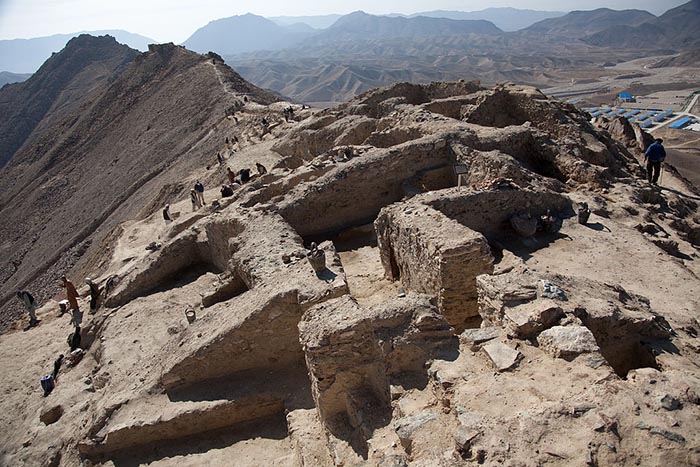 Remains of the huge monastery that dominated the city of Mes Aynak, Afghanistan. 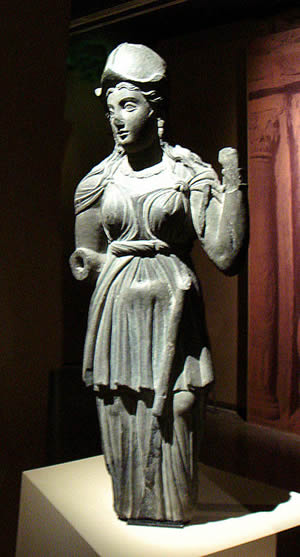 The Art of Gandhara

Gandhara began to produce art in a distinctive style from about 50 BC. It displays a coming-together of Greek, Iranian and Indian influences, and was at its best in the Kushan period. Subject matter is exclusively Buddhist - most popular being Buddha (resembling Apollo) and Buddha's mother (resembling Athena). Artists worked in stone and terracotta.

A strategic and much contested territory in the "North West Frontier" region between Pakistan and Afghanistan. 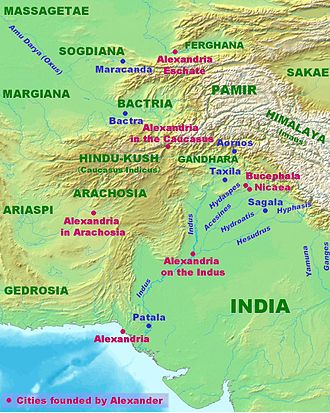 Gandhara and neighbours in the 4th century BC

A member of the powerful Parthian Suren family. For a short while he ruled Gandhara, Seistan and the Punjab. His successors soon lost territory, and had been totally absorbed by the Kushans by AD 100. Gondophares supposedly received St Thomas on his first missionary trip to India.

It was while addressing the Council of the West Essex Unionists on February 23, 1931, that Churchill remarked of how, to him and most likely to much of his audience, it "was alarming to see Mr. Gandhi, a seditious Middle Temple lawyer, now posing as a fakir of a type well known in the East, striding half-naked up the steps of the Viceregal Palace, while he is still organising and conducting a defiant campaign of civil disobedience, to parley on equal terms with the representative of the King-Emperor."