The contenders for power

THE PERSIANS & OTHER CONTENDERS 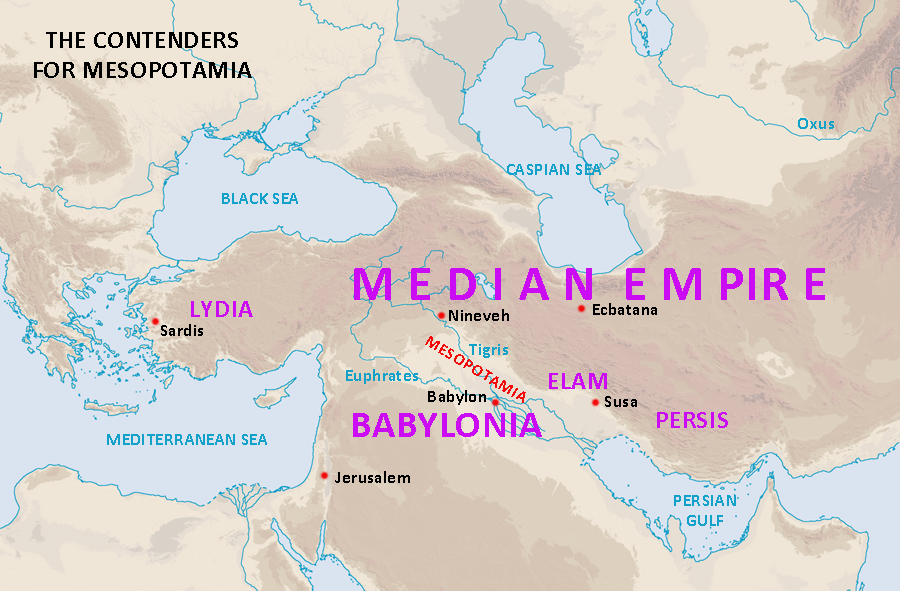 Contenders for territory in the 6th century BC

'As soon as the cities of the plain had been made to flourish [the result of a gentle sloping landscape in the lower Tigris-Eurphrates valley that carried irrigation water for miles] they became tempting objects of plunder to the barbarous peoples of the country round about'. (W H McNeill)

If asked to give a name to this geographical region, which includes parts of Europe and Africa as well as Asia, you'd probably say "The Middle East". Our "Middle East" should lie between the "Near East" (not much used today - it once meant Greece and Turkey) and the "Far East" (China and Japan), because western Europeans have always seen themselves as the centre of things. But Europe was way off in the "Far West" when civilised life was starting to evolve in this region.

It's obvious that the centre of the region is Mesopotamia (now mostly in Iraq) - a fertile lowland area surrounded by mountains or desert, with two massive navigable rivers running through it. No wonder that it was here in the "Fertile Crescent" that the world's earliest cities appeared, and where agriculture began. No wonder everyone wanted a piece of it. No wonder that in Jewish tradition it was the site of the "Garden of Eden":

Before the Persians emerged as contenders in the 6th century BC, great civilisations had flourished and faded away since at least 3500 BC, including most recently: The Assyrians and the Elamites. By 600 BC, however, they were no longer contenders: 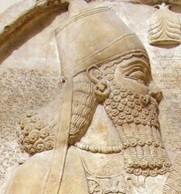 They’d had a very long earlier period of dominance, and a more recent second go. They had controlled most of the territory marked on the map above as Lydia, Median Empire and Babylonia. They had been very aggressive, utterly ruthless, and extremely successful - terrorising the peoples between the Mediterranean coast and the Zagros mountains. With leaders like Sennacherib they seemed unstoppable - cities were wiped off the map. But when they started fighting among themselves, their empire began to break up. The Medes, Babylonians and Lydians took over their territory, and destroyed their capital at Nineveh in 612 BC. But their art, architecture, language (and script) as well as their skills in fighting and organisation had a deep influence on the Persians, when they became the super-power. More on the Assyrians. 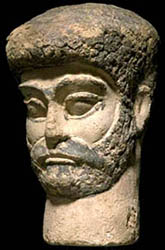 As the Elamites occupied much of the territory later ruled by the Persians, there's a full section about them here. Their centre was in Khuzistan, to the west of the Zagros mountains, and their capital was at Susa. They had competed with the Assyrians and Babylonians for control of Mesopotamia - but finally lost out to the Assyrians in 616 BC - until they in turn fell to the Medes.

From around 650 BC, part of their territory, Anshan in the southern Zagros mountains, had been taken by the expanding Persians. More on the Elamites.

By the end of the 7th century (say 600 BC), the Assyrians and Elamites were no longer contenders. Any people wanting to dominate Mesopotamia would now have to confront: 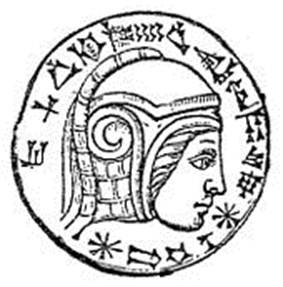 They had also had had earlier success, always in rivalry with the Assyrians. The founder of the first and rather brief Babylonian empire, Hammurabi (died c.1750 BC), produced one of the world's earliest codes of laws. Dominated for a long time by the Assyrians, who had destroyed their capital at Babylon, they finally shook them off, and, under Nebuchadnezzar II, rebuilt their city. Its size and beauty made it the most famous in the world. Under Nebuchadnezzar, the Babylonians destroyed the Temple in Jerusalem, and took the people of Judaea as prisoners to Babylon. Then the Medes appeared … More on the Babylonians. 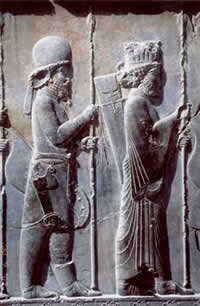 The Medes were very closely related to the Persians. Allied with the Babylonians, they finished off the Assyrians. Herodotus tells us that, from their capital at Ecbatana (Hamadan), they ruled an empire which bordered Lydia in the west and stretched as far east as Afghanistan, and included Persis. However, the extent and even the existence of a unified Median empire is now disputed by scholars. But, in any case, the Medes' rule was brief. Their conqueror, according to Herodotus, was to be the son of a Mede princess - and a Persian father (unless he was an Elamite) … The Medes and Persians were henceforth united under a single ruler.

Then came the Persians …

At first hardly contenders at all - just a harmless group of horse-riding cattle-raising nomads who some think had been peacefully settled in an area south-east of the Zagros Mountains today called Fars, for perhaps 500 years. Its people called it Parsa (Greek Persis). Evidence, however, of how and when Iranians came on to the plateau is very hard to come by. Around 650 BC, they appear to have conquered the Elamite territory of Anshan to their north-west. Their rulers called themselves kings of Anshan, perhaps showing they wished to be seen as successors to the Elamites. But now they had a new king: Cyrus (as the Greeks called him; Kurush or Kurash in his own language) …

NEXT: CYRUS THE GREAT

Between Tigris and Euphrates

Mesopotamia, land of two rivers - the prize which all aspiring empires in the "Middle East" had to compete for. Once the mighty Assyrian empire had fallen, the contenders lined up. The Babylonians were in current pole position. The Elamites had been eliminated. The Lydians were a long way away. But there were still the Medes. No one expected the Persians to be contenders.

included the Sumerians,the Akkadians, the Elamites and numerous others. See here for a complete list.

The Assyrians were much more violent and bloodthirsty than the Persians. Here are Sennacherib's boasts (recorded on a baked clay prism around 689 BC):

“ As for Hezekiah the Judahite, who did not submit to my yoke: forty-six of his strong, walled cities, as well as the small towns in their area, which were without number, by levelling with battering-rams and by bringing up siege-engines, and by attacking and storming on foot, by mines, tunnels, and breeches, I besieged and took. 200,150 people, great and small, male and female, horses, mules, asses, camels, cattle and sheep without number, I brought away from them and counted as spoil. (Hezekiah) himself, like a caged bird I shut up in Jerusalem, his royal city. I threw up earthworks against him, the one coming out of the city-gate, I turned back to his misery. His cities, which I had despoiled, I cut off from his land, and to Mitinti, king of Ashdod, Padi, king of Ekron, and Silli-bel, king of Gaza, I gave (them). And thus I diminished his land. I added to the former tribute, and I laid upon him the surrender of their land and imposts, gifts for my majesty. As for Hezekiah, the terrifying splendor of my majesty overcame him, and the Arabs and his mercenary troops which he had brought in to strengthen Jerusalem, his royal city, deserted him. In addition to the thirty talents of gold and eight hundred talents of silver, gems, antimony, jewels, large carnelians, ivory-inlaid couches, ivory-inlaid chairs, elephant hides, elephant tusks, ebony, boxwood, all kinds of valuable treasures, as well as his daughters, his harem, his male and female musicians, which he had brought after me to Nineveh, my royal city. To pay tribute and to accept servitude, he dispatched his messengers.”

The commonest word used to describe the civilisation of the Medes is "elusive". We have nothing written by them, no piece of Median art has been positively identified, and excavation at their capital Ecbatana has so far revealed nothing of the early period. We have to rely on Herodotus for their story. The site at Nush-i Jan near Hamadan was presumably Median: it's been extensively excavated, but, apart from a few pieces of pottery, reveals very little about the "elusive" Medes! More here

Emerged from Assyrian domination to carve out a small empire in the west of what’s now Turkey, with a capital at Sardis. Under their king Croesus, they were proverbial for their wealth. Until the Persians came …