Ancient Babylonia - commonly also known as Mesopotamia (the land between the rivers - ie the Euphrates and the Tigris) - has been known as IRAQ since the 6th century BC. The name most probably derives from Persian eragh, meaning "lowlands", though other theories exist. In any case it's used for the lowlands west of the Zagros mountains (and also sometimes for the lowlands in Iran itself east of the Zagros).

The region, at the eastern end of the "fertile crescent" saw, in the Neolithic period ("Pre-pottery periods A and B" from around 11,000 BC) the first domestication of animals, agriculture, and rectangular buildings.

Before the Persian conquest

Ubaid culture is characterized by large unwalled village settlements, multi-roomed rectangular mud-brick houses and the first temples. Domestic equipment included a buff or greenish colored pottery decorated with geometric designs in brown or black paint; tools such as sickles were often made of hard fired clay in the south. But in the north, stone and sometimes metal were used. Villages thus contained specialised craftspeople, potters, weavers and metalworkers, although the bulk of the population were agricultural labourers, farmers and seasonal pastoralists. Agriculture and animal husbandry were widely practiced in sedentary communities. The first moves toward "civilisation" occurred towards the end of this period (founding of cities, pictograph writing, cylinder seals, mass-produced goods) - associated with the Sumerians.

The first city-states, writing system, record-keeping, use of the wheel, evidence for Mathematics, Astronomy, Astrology, Law, Medicine and organised religion. Their language has no known relatives. Akkadian influence appears - from where is not known - around 2800 BC, and the Semitic Akkadian began to converge with Sumerian - this era is known as Sumero-Akkadian.

Sargon of Akkad conquered all the city-states of Mesopotamia, as well as the Assyrians to the north. He added peoples to the west (Gutians and Elamites) and attacked the Amorites to the east..

After a brief dominance by the Gutians, and an Assyrian revival, the Sumerians under king Shulgi recovered most of the territory of the Akkadian Empire - until they were invaded by the Elamites in 2004 BC.

Expanded from northern Iraq to rule Syria and eastern Anatolia - but southern Iraq had broken up into a number of city-states. All spoke Akkadian.

From 558 BC, Iraq became incorporated in the Persian empire of Cyrus and its successors - the Parthians, the Sasanians, then came the Abbasids, the Seljuqs ... Baghdad was sacked by the Mongols in 1228, but in due course returned to rule from Iran. The Safavids lost it to Ottomans after the Battle of Chaldiran in 1514, then recovered it, but lost it permanently to them in 1639. Iraq stayed part of the Ottoman empire until World War I. 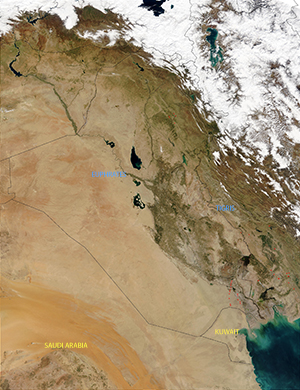