The Sasanians: Khusrau I - his wars

Round 1: Invasion of Byzantine empire AD 540

Khusrau, having settled things at home, was ready to take on the Byzantines, despite the "perpetual peace" recently negotiated with the emperor Justinian (in 532). His attack had a least two motives: the need for plunder to replenish his treasury, and the importance of a pre-emptive strike to forestall an attack on Persia by Justinian.

His first ambition was soon well satisfied: in AD 538 he sacked Antioch (no longer the stronghold it was thanks to a recent earthquake). Justinian was forced to pay cash to secure peace - his armies were too far away. On the way home Khusrau I, pushing his luck, made Edessa, Dara and other Byzantine cities in Mesopotamia pay for 'protection' to be left alone.

Because of Khusrau's greed, the second objective misfired: Belisarius, Justinian's able commander-in-chief was told of his next mission: Persia. 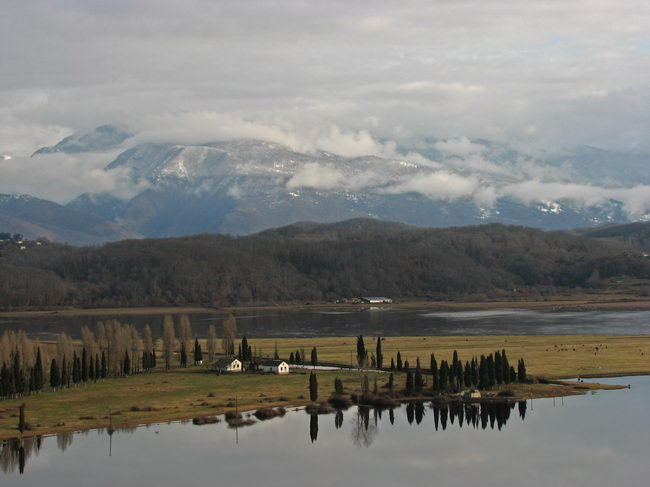 The Black Sea and the Caucasus looking north from Lazica

There was a new flashpoint: Lazica on the Black Sea, the former land of Colchis. The perpetual peace of 532 had confirmed it as a Byzantine possession - not entirely to the liking of its people, who were not necessarily Christians. But Justinian had built forts there, and even a city: Petra Pia Justiniana (known as Petra) bearing his name. For Justinian it was strategically important to cut off Sasanian access to the Black Sea. He was afraid Khusrau might be able to launch a direct attack by sea on Constantinople from there. In 541 Lazica appealed secretly to Khusrau - who immediately invaded. Justinian sent troops to resist. Khusrau took Petra, and reestablished Persian control.

At the same time as this action in Lazica, Belisarius arrived in Mesopotamia. He tried, but couldn't take Nisibis, on the Persian side of the Euphrates. Khusrau replied by besieging Edessa, the most important city in the Byzantine sector, which he too failed to capture. A 5-year truce seemed to be the answer: the Byzantines paid up handsomely for this once more, and Belisarius returned to Italy.

The people of Lazica, who had not liked the Byzantines much, decided they didn't like the Sasanians either - a revolt against Persian rule was supported by a Byzantine invasion. The truce had lasted 4 out of its 5 years (in 548). The struggle was centred on Sasanian-held Petra: it finally fell to the Byzantines in 551. Time for another 5-year truce, later extended to a 50-year truce in 561. By now the Persians realised that they had little to gain by continuing the war - and withdrew in return for an annual payment of gold.

War in the East

Khusrau needed peace with the west, because problems were looming in the east. The Hephthalite Huns were still occupying Iranian lands in the east: Khusrau decided it was now time to dislodge them. To do so, he made a dangerous alliance: with the Turkic tribes who were moving in on Hephthalite territory from the other flank, from the east. At first this two-pronged attack seemed to work, with both Sasanians and Turks combining to destroy the Hephthalites - but it would soon become a situation more resembling the Nazi-Soviet pact of 1941 (which was very soon followed by Operation Barbarossa, when one of the signatories of the pact invaded the territory of the other). In around 560, the Sasanians and Turks finished off the Hephthalite empire at the battle of Bukhara. But by 568, the Turks were trying to fix an alliance with Byzantium. But at any rate, there was no need to fear the Hephthalites any more. Sasanian control of the Silk Route through Bactria was restored. The Oxus (Amu Darya) was once again the frontier - and through the compilation of historical material known as the Xwaday-namag ('Book of Kings'), the Iranian notion of an age-old confronation between the people of the Iranian plateau and the people of Turan had began to evolve (as put into final form in the Shanameh of Firdowsi alound AD 1000.

The prosperous south-west corner of Arabia, now known as Yemen, but then as Arabia Felix ('Happy Arabia') greatly interested the Byzantines, as a strategic link on the sea-route to India controlling the Silk Route. Various small kingdoms - including Aksum (or Axum) from Ethiopia across the Red sea - had fought for supremacy. From the 2nd century AD, the dominant force had most frequently been the Himyarites. The arrival of a Himyarite delegation at the court of king Bahram II in around AD 272 was an event important enough to be commemorated on a rock relief at Bishapur. Around AD 500 the Himyarites adopted Judaism as a state religion - to the fury of the Miaphysite Ethiopian Christians of Aksum, who had claimed to be the true rulers of Yemen ever since they'd been kicked out in around AD 270. The Ethiopians also claimed they - rather than the newly-Jewish Himyarites - were the true descendants of the legendary Old Testament kings, David and Solomon. 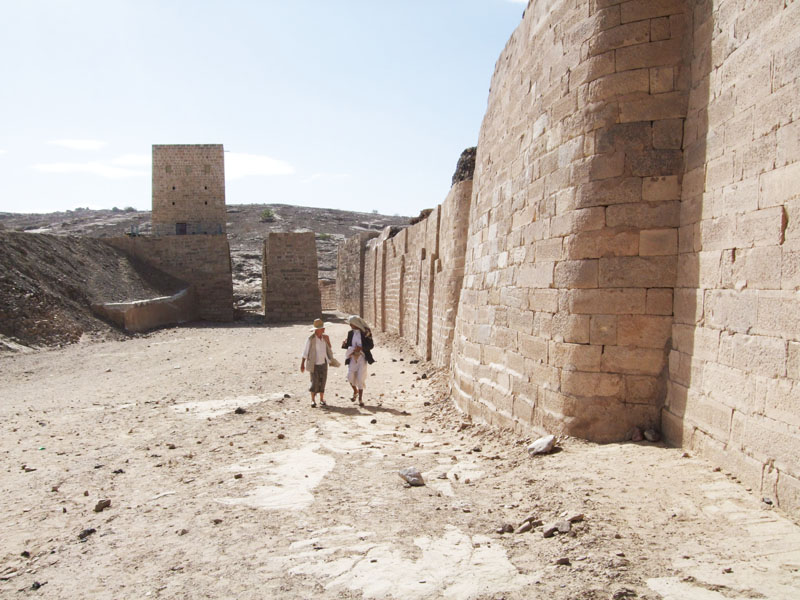 The Marib Dam, built around 1700 BC and irrigating 10,000 hectares - supporting 50,000 people in an otherwise hostile environment. It was repaired by Abraha, but by AD 570 it had completely silted up and was no more use.

Click here for more pictures of the Great Marib Dam.

The Himyarites, under their king Yusuf, pursued an aggressive policy towards Christian Arabs: they carried out a massacre of Christians in AD 523 at Najran - part of an attempt to force them to convert to Judaism. With the encouragement of Christian emperor Justin I, the Ethiopians under their negus (king) Kaleb seized on this excuse to invade Yemen in AD 525. The Himyarites fought back, but were crushed and Yusuf was dethroned. Before long the small-scale Aksum v. Himyarite struggle began to develop into a proxy war between Byzantium and Persia.

The emperor Justinian had the idea of allying himself with the Ethiopians in order to work against Persia. (Procopius)

An Ethiopian Christian, Abraha, seized power in Yemen, broke with Aksum, and began flexing his diplomatic and military muscles. Deluding himself that he could exploit the various powers with interests in the region, he held a conference at Marib (where the great dam was under repair), to which he invited the Byzantines, the Persians, the Ethiopians and the Christian Arabs (the Lakhmids from al-Hira).

But not the pagan Arabs. In AD 552, Abraha launched an attack on central Arabia. This attack was probably the origin of the Arabic tradition (referred to in the Qu'ran) of an attack on their holy city of Mecca.

Abraha, as a Christian, counted on support from Byzantium. His opponents appealed to Khusrau, but nothing had happened by the time Abraha died in 569 or 570.

In 572, one of Abraha's sons escaped to Khusrau I. Finally there would be some support from Persia. The emperor Justin II had begun persecuting Miaphysite Christians - whose loyalty to Byzantium now came to an end. Khusrau sent a force which soon conquered Yemen: south Arabia became a province of the Sasanian empire, and the Jewish religion was restored at the expense of the Christians. Having secured the Silk Route in the northeast, it was important to make sure that the Byzantines didn't get their hands on the sea-borne trade via India. In fact, as a consequence of Byzantine interference, by acquiring Yemen, the Sasanian command of the Indian Ocean was actually strengthened.

When the unstable nephew of Justinian became Byzantine emperor Justin II in 565, after the death of his uncle, Khusrau decided once more on some aggressive moves. Some cheeky interference in Armenia - quiet for so long - would soon get Justin's attention. Building a new Zoroastrian fire-temple in one of the major Armenian centres lit the fuse which set Christian Armenia in revolt (571).

Furious at this provocation, Justin II soon provided an excuse for Khusrau to invade Byzantine territory. He could no longer afford to spend money on the empire's defences: this gave the Lombards an opportunity to invade Italy (which Justinian had restored to the Roman empire) , and the Persians the justification they needed to invade Mesopotamia.

The focus was again on the Byzantine strongholds in Mesopotamia. The Sasanians forced the Byzantines to retreat from Nisibis and laid siege to Dara, where they'd holed up. Dara surrendered, and Justin II offered a truce - at a huge price (572). Justin's mental state deteriorated (possibly as a result) and he was replaced as emperor by Tiberius (574). War continued, however, in Armenia and Mesopotamia, with victories and defeats on both sides. Armenia was eventually returned to Persian rule (578), with its Christian heritage accepted, and general peace negotiations with the Byzantine general Maurice (soon to be emperor) were under way when when Khusrau I died in 579.

NEXT: KHUSRAU I - THE PHILOSOPHER KING

Khusrau I is successful

in wars against the Byzantines (in Lazica and Mesopotamia), the Hephthalites and the Ethiopians in South Arabia. 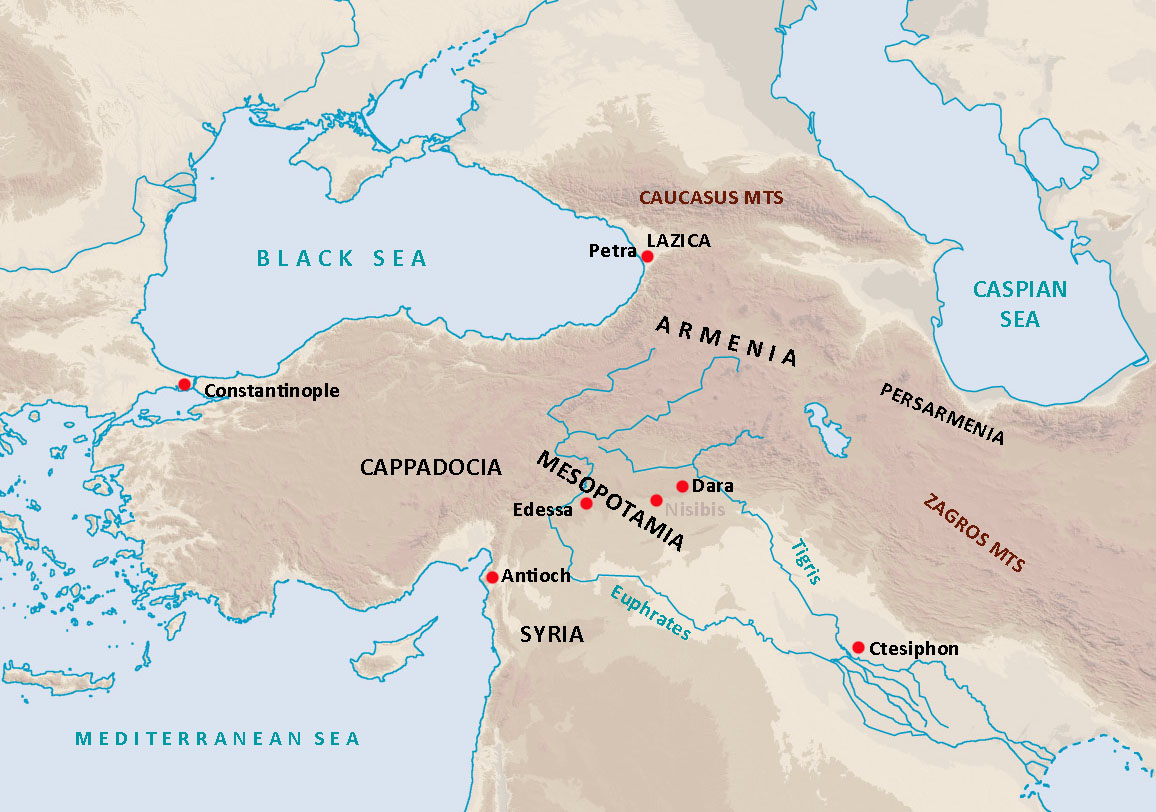 Map showing the campaigns of Khusrau I in Lazica and Syria/Mesopotamia 540 - 561. 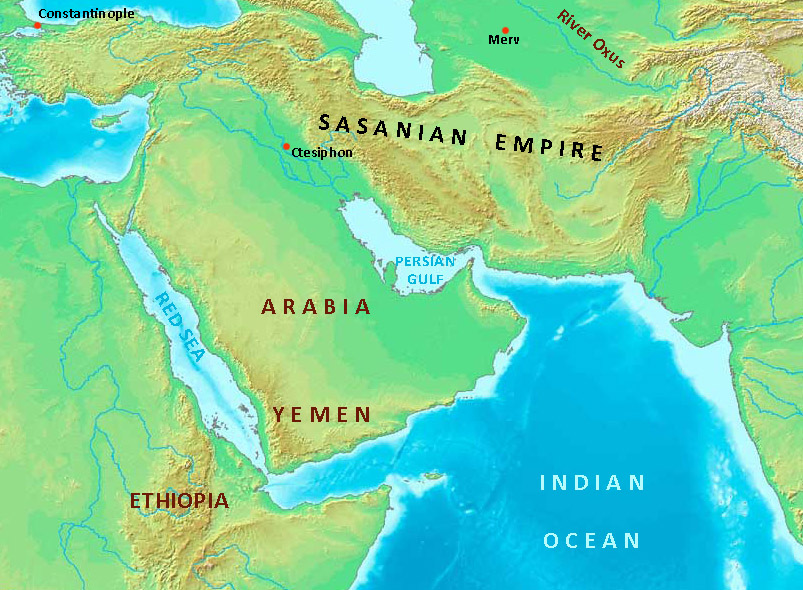 The campaigns of Khusrau I in Afghanistan and Arabia

The Ostrogoth inheritors of the western Roman empire had warned Khursrau that Justinian intended to move on the Persians once he'd dealt with the west (it was in their interest, of course, if Justinian was fighting on two fronts). Justinian had ambitions to reconquer the western half of the Roman empire, and his impressive general Belisarius had had some success in North Africa and Italy, where he captured the Ostrogoth capital of Ravenna in 540.

Khusrau revived one of the policies of Shapur I in dealing with Antioch - he deported the population to a new city, a recreation of Antioch, known as Veh Antiok Khusrau (Khusrau's New Improved Antioch).

The setting for the ancient Greek story of Jason and the Golden Fleece - Jason, with the help of princess Medea, put the serpent guarding the fleece to sleep, and escaped back to Greece with the gold and the girl. Lazica corresponds approximately to today's disputed Georgian territory of Abkhazia.

The River Oxus remained the frontier between the Persians and the Turks - it's not known how far east their territories stretched - or whether Khusrau I annexed any part of the Hephthalite Indian possessions. This is the first time the name "Turk" is used - first by the Chinese around 552.

Luckily didn't happen - yet. The emperor Heraclius would later exploit the idea.

Date and other details very convincingly argued by Bruno Overlaet in Arabian archaeology and epigraphy 2009: 20: 218-221.

The pagan Arabs worshipped a sacred stone (probably a meteorite) known as the Ka'aba. It was already the most important focal point of religion in Arabia, and a magnet for pilgrims. According to tradition Abraha's attack, and attempt to steal the Ka'aba occured in AD 570 - the year of Muhammad's birth. This is impossible to reconcile with the other dates.

The Ethiopians were Miaphysites, and thus strictly speaking heretics as far as Constantinople was concerned: but they were happy to ignore such niceties when it suited them. Justin II however resumed normal persecution. Abraha built a cathedral in Sana'a (capital of Yemen) whiich stood until its destruction in th 8th century by the Arab rulers. Stone from it was reused to build the Great Mosque in Sana'a. Abraha had intended Sana'a to replace Mecca as the religious centre of Arabia.

The was in effect 'protection money' which Justinian had been paying to various Arab tribes, the Avars in the north (who drove the Lombards into Italy), and the Sasanians.

The 6th century troubles of Arabia Felix inevitably bring to mind the current (2017- ) 'proxy war' in Yemen, between Houthi Shia supported by Iran, and Sunni government supported by Saudi Arabia and its allies.