Today there are around 40 million people who identify as Kurds - distributed among four nations: Iran, Turkey, Syria and Iraq. They were promised a state of their own at the Treaty of Sèvres in 1920 in the aftermath of the First World War: the promise was ignored, and the Kurdish peoples' ambitions are still unresolved a century later.

The Kurds speak an Iranian language - and may well be the descendants of nomadic tribes who are recorded under similar names from as far back as Karda in Sumerian records over 4000 years ago , the Kardouchoi who created such a hostile environment for Xenophon's 10,000 on their way from Cunaxa to the Black Sea, and the small kingdom of Qardu, Corduene or Gorduene which arose between the decline of the Seleucids and the rise of Rome. Some Kurds believe they are the descendants of the ancient Medes - not impossible.

Until the medieval period, however, the term Kurd did not refer to an ethic/linguistic entity, but was used to describe people who lived in the mountains, spoke an Iranian language, and followed a nomadic way of life.

The territory of Corduene (or Gorduene) situated south of Lake Van was rulled by Urartu, and then by Armenia. It was occuopied by the Romans during Pompey's eastern adventure, and its status was subsequently frequently disputed between Rome and the Parthians and, later, Rome and the Sasanians. From the homophony of the name, it's frequently been associated with ancient Kurds.

The Kurdish areas were conquered early on by the Arab invaders and theoretically converted to Islam - but it was a slow process before all the Kurdish areas were brought fully into the Islamic world. The caliph al-Mu'tasim was forced to take strong action. But as the Abbasids declined, and the succeeding Seljuqs in turn lost control of the mountainous areas, Kurdish dynasties were among those who emerged to claim a degree of local power, in Armenia, Azerbaijan, northern Mesopotamia, western Iran and elsewhere. In 1174, a Turkish dynasty ruling from Mosul, the Zangids, lost ground to the most successful of these Kurdish groups, the Ayyubids, led by the charismatic Saladin. 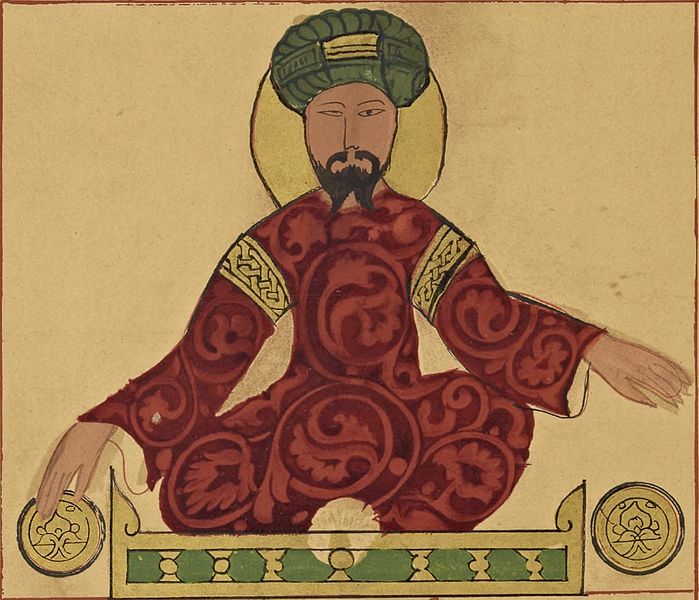 Possibly a near-contemporary image of Saladin

Saladin (Salah ad-Din Yusuf), like many Kurds, was employed as a soldier by the Zangid dynasty, vassals of the Seljuqs. He was sent with his uncle Shirkuh by Nur ad-Din to Egypt. He emerged from a complex three-way struggle beteen his uncle, the Egyptian vizier Shawah, and the leader of the Franj, Amalric, King of Jerusalem, as a proven leader against the Crusaders. After Shawah's disgrace and brutal murder, and his uncle's death, he was himself made vizier, despite being Sunni, by al-Adid, the young Shi'i Fatimid caliph. He used his position to undermine the Fatimid caliphate - and in 1171, after the caliph's death - abolished it, and reunited Egypt with the Sunni Abbasids. He went on to defeat the Crusaders in Syria (1174), and to challenge and defeat the Zangids: he was proclaimed sultan of Egypt and Syria by the Abbasid caliph al-Mustadi. He completed the conquest of Muslim Syria by 1183 - although the Zangids kept Mosul until 1250.

Jerusalem had been in the hands of the Franj since the "First Crusade" in 1099. In 1187, Saladin's complete victory over the Franj at the Battle of Hattin - thanks to his tactical control of water sources - led to the reconquest of Jerusalem (with minimal bloodshed, in contrast with the brutality of the Franj in 1099) and Palestine - though the Kingdom of Jerusalem managed to survive, to inspire the Third Crusade (1189 -92): the Franj, led by Richard I of England ("The Lionheart"), and Saladin both had successes, leading to a peace, where the Franj would control the coast, and be allowed to visit Jerusalem (still controlled by Saladin) as unarmed pilgrims. Saladin died in 1193, having given away most of his wealth to the poor. He was buried in a mausoleum outside the Umayyad Mosque in Damascus.

The Ayyubid dynasty continued to rule Egypt after Saladin's death until they were ousted by the Mamluks in 1249. The Mongols took the Ayyubid domains in Syria in 1260 - but their defeat by the Mamluks allowed the dynasty to survive as a Mamluk vassal until 1341.

The various Kurdish tribes continued to operate independently without much interference, until the confrontation between Safavid Iran and Ottoman Turkey placed them squarely on the frontier beween the the two empires. Although the Safavid family had (probably) Kurdish roots - the Kurds found their territories fought over for the next 300 years: an attempt to assert themdelves was brutally suppressed by Abbas I, and a vast number of Kurds was transported to Khorasan on the eastern frontier, where there is still a sizeable Kurdish community. But there were also Kurds who served prominently as viziers to the Safavids.

It's believed that Karim Zand, founder of the dynasty was of Kurdish descent - his family is thought to have been descended ftom Kurdish immigrants to Luristan.

Their policy of centralisation in the 19th century removed local autonomy, as power was transferred away from Kurdish beys and amirs, one of whom led the first uprising. By 1880, a Kurdish nationalist movement had emerged, demanding a Kurdish state free of both Turkey and Persia. It was squashed by the Ottomans, who subsequently tried to encourage Kurdish integration, by suppressing nationalists and promoting their opponents.

A fully-fledged Kurdish independence movement grew in the aftermath of the First World War. Kurds as well as Armenians were enthusiastically cleansed by the Young Turks. They also rebelled against the uncompromising Turkish nationalism and secularism of Kemal Atatürk, who quashed the idea of a Kurdish state which had been proposed in the Treaty of Sèvres in 1922.

The Kurdish Republlic of Ararat was declared in 1927, and crushed in 1930, despite appeals to the Great Powers and the League of Nations.

The Kingdom of Kurdistan existed in eastern Iraq from 1921 until 1926. It was eliminated by the Iraq government, with help from the RAF.

The Republic of Mahahbad was a short-lived Kurdish state (Jan- Dec 1946) in northwest Iran, sponsored by USSR.

Within Turkey, there were revolts throughout the 20s and 30s - leading to the imposition of martial law and deportations. Integration (not assimilation) proceeded quietly during the 50s, but stopped after the Turkish military coup in 1960. Since then, Kurdish nationalism has been progressively undermined: Kurdish language, dress, culture and even names have been banned. Kurds who spoke, wrote or sang in their own language were imprisoned. The Kurdistan Workers' Party (PKK) was formed to oppose the Turkish government in 1978 - and to promote (originally) an independent Kurdistan, or (today) at least equal rights for Kurds within the Turkish state. The PKK - branded a terrorist organisation in several countries - has led an armed struggle up to the present in which over 40,000 people have died. A ceasefire in 2013 was cancelled in 2015 because of Turkish failures to implement agreed reforms, which would have allowed Kurdish representation in government had they obtained over 10% of votes cast. This had seemed very likely: hence the backtracking.

A nation in search of a state for many centuries, but whose territory is still owned by four other states. Turkey, where the largest Kurdish population lives still oppresses them on lingusitic and cultural grounds - although most of them follow a similar former of Sunni Islam to the Turks. Partly this may stem from the fact that the Kurdish presence predates the arrival of Turks tribes in Anatolia by a millennium or more. 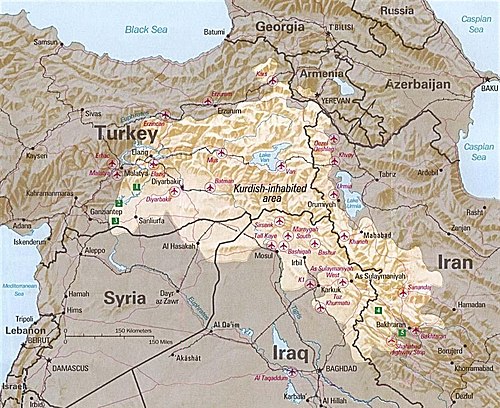 The source for this - and much of the whitewashing/humanisation of Saladin is : The Rare and Excellent History of Saladin or Al-Nawadir Al-Sultaniyya Wa'l-Mahasin Al-Yusufiyya by Baha' Al-Din Ibn Shaddad . The author was an admirer and associate of Saladin, and thus a rare source for the Muslim point of view.