The Kushans have not been recognised as the major players they were because of geography - they were seemingly equally peripheral to the Iranian powers to the west as to the Chinese to the east. First recorded by Chinese sources as Yuezhi, allies of the Han dynasty, (see here for discussion of their origins), they left their earlier home in the Tarim basin in western China, as a result of defeat by the Xiongnu, around the beginning of the 2nd century AD, to settle in Bactria - then weakened by internal conflict and the rise of Parthia.

The first certain Kushan king was Kujula Kadphises (c.50 -c.90 AD), credited by Chinese sources with uniting the five tribes, defeating Hermaios, the last Greek king of Bactria, and expanding his territory south of the Hindu Kush into Gandhara. His son, known from coins to be called Vima Taktu (c.90 - c.113), also ruled in north-west India. He was succeeded by his son Vima II Kadphises (c.113 - c.127). He issued gold coins, which begin to show Indian rather than Greco-Roman influence, reflecting the increased prosperity of his empire. The Kushans had adopted the Bactrian language, written using a Greek script. 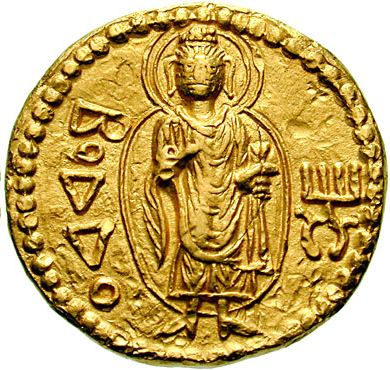 Kanishka succeeded his father, Vima II, possibly about AD 127. He now called himself "king of kings", as had his Bactrian predecessors, in full Achaemenid style. He expanded Kushan power further into northern India, claiming in an inscription to rule as far east as Pataliputra [Patna on the Ganges], former capital of the Mauryas. He fought a battle with the Chinese; he extended Kushan rule back into their earlier homeland in the Tarim basin. Buddhism was the principle religion of India; Kanishka was probably not a convert, although he approved of it and encouraged its spread northwards, and eventually into Bactria. The main centres of the Kushan empire were Bactra (Balkh), Kapisa (Bagram in Afghanistan) and, his capital, Purushapura (Peshawar), where he founded a Buddhist monastery, and where the Kanishka stupa - one of the tallest buildings in the ancient world - was built after his death to hold Buddhist relics. The Indo-greek Gandharan style of art began to flourish at this time. His reign is considered to have been the start of the golden age of the Kushan empire, which lasted until AD 232.

Next came Huvishka - son or possibly brother of Kanishka., a reign that saw a largely peaceful consolidation of Kushan rule in India, signified by moving his capital further away from Bactria to Mathura (south of Delhi), and minting a large number of gold coins - mostly still in Balkh. His successor, Vasudeva I, also had a peaceful reign - although the contemporary rise of the Sasanian dynasty in Iran was ominous. Kanishka II lost the Bactrian and Central Asian part of the empire to Shapur I. Shapur included Kushanshahr "as far as Peshawar" as one of his domains on the "Cube of Zoroaster" at Naqsh-e Rustam. From then onwards, the Kushan kings presided over diminishing territory in India only - their names are known from a few inscriptions, and less and less impressive coins. Kanishka III is celebrated for using the word Kaisaro (Caesar) on his - showing an early awareness of global realities. From his time, as their empire shrank to the environs of Taxila, the Kushan rulers became vassals of the new masters of India, the Guptas.

From the time of the Parthians, despite internal upheavals and political change, the mercantile class in Central Asia and the sub-continent flourished. The Parthians and the Kushans opened Central Asia to China and to India. The Roman demand for spices and luxury goods brought Roman traders to India and beyond. The merchants, attracted to Buddhism and, in India., Jainism, led their communities to prosper - evidenced by inscriptions documenting their philanthropy. Coinage was issued on a massive scale, and foreign currency, such as Roman denarii, circulated widely.

From the time of Shapur I's victories (of which no real details are known), the western section (Bactria, Tocharistan) of the Kushan empire was under Sasanian control. Most evidence is from coinage. It appears not to have been ruled directly by the Sasanian king of kings, but to have been allowed a degree of independence ruled by its own Kushanshahs, who originated from a cadet branch of the family.

The same names occur as in the main family, although the title "Kai" was used by the Kushanshahs well before it was adopted by the Sasanian Yazdegird II (438 - 457). The earliest named ruler is an Ardashir, whose coins were inscribed in Pahlavi but also in Bactrian APΔAÞΟPΟ KΟÞANΟ ÞAΟ - "Ardashir Kushan Shah." Next was Peroz, who began to dislodge the Kushans from Gandhara. By the end of the 3rd century, Hurmazd I was daring to call himself KΟÞANΟ ÞAΟNΟNΟ ÞAΟ, Kushan Shah of Shahs - king of kings, in a challenge to the Sasanians. Possibly he was the same Hurmazd who later became Sasanian shah Hurmazd II. The last Kushanshah was Bahram (330-365) - who lost Gandhara to Shapur II, while his more northerly territory fell to the Kidarite huns, whose coins indicate they saw themselves as the inheritors of the kingdom. No more is heard of the Kushanshahs.

Established an extensive, powerful and wealthy empire on both sides of the Hindu Kush between the 1st and 3rd centuries AD. Evidence is from Chinese sources, coinage and inscriptions. Nearly all dates are tentative. 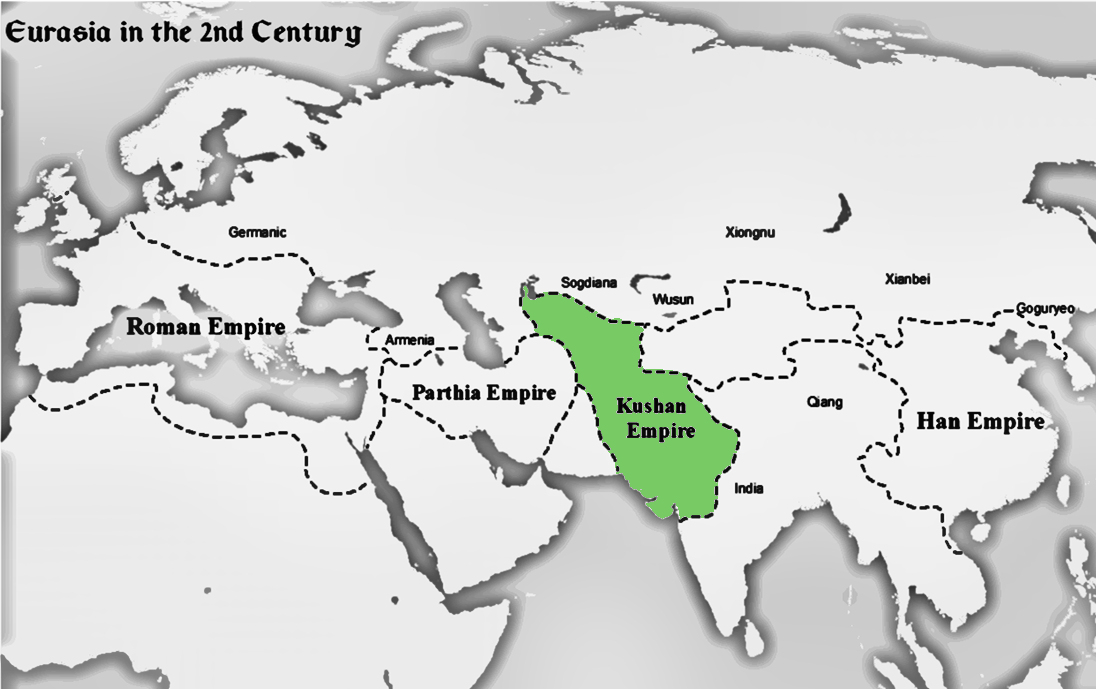 The Kushans linked China and Iran with India

Or maybe he was the first Kushan king - he does call himself Kushan on coins - and also "Tyrannos". Or perhaps he was the same person as Kadphises. Much is obscure in the interpretation of Kushan coins.

In Bactrian, found at Rabatak, a Kushan site in Afghanistan in 1993. As well as defining the extent of Kanishka's territory, it has confirmed the names and relationships of the first Kushan kings:

The symbol Þ, which occurs three times in the legend on the coin represents the sound "sh". It was a Kushan addition to the Greek alphabet used by the Bactrians.