Darius was pleased that it had been settled so quickly, and showing acute understanding of the Greek mentality, he allowed the Greek cities to keep their democracies, as long as they paid their taxes.

Only one thing bothered him - the burning of Croesus's beautiful city of Sardis. Says Herodotus:

Darius was informed that Sardis had been captured and burnt by the Ionians and the Athenians, and that the leader of the rebels was Aristagoras of Miletus. He knew he could punish the Ionians, but he asked who the Athenians were. When they told him, he asked for a bow, took an arrow and shot it up into the sky. As it sped upwards he said “Zeus, grant I may punish the Athenians.” He ordered one of his servants to repeat to him at dinner each day three times: “Master, remember the Athenians.”

This story suggests that Darius regarded the Athenians as so unimportant, he’d otherwise have forgotten about them. Unfortunately, the only account we’ve got of Darius’ expedition to Greece is Greek, by Herodotus of course. From the Greek point of view it seemed as if Darius’ attack was aimed at Athens, to avenge the burning of Sardis. But it’s unlikely that this was his only motive. Probably he was planning to consolidate his control of Ionia, by making sure that his navy was the main power in the Aegean Sea (Athens had no navy at this time). An important part of his plan was to capture some of the larger islands, including Thasos (where there were very productive silver and gold mines). He invited the cities of Greece to surrender to him (“sending earth and water”), and most did. The newly-established democracy at Athens refused. The pro-Persian ruler (tyrant) of Athens, Hippias, had recently been expelled, and was advising the Persians in hopes of being reinstated.

When the Persians landed on a beach not far from Athens near the village of Marathon, Darius may have thought it would be easy to teach Athens a lesson, while the Persians were in the neighbourhood. The English poet Robert Graves perhaps sums it up quite nicely:

Truth-loving Persians do not dwell upon
The trivial skirmish fought near Marathon.
As for the Greek theatrical tradition
Which represents that summer's expedition
Not as a mere reconnaissance in force
By three brigades of foot and one of horse
(Their left flank covered by some obsolete
Light craft detached from the main Persian fleet)
But as a grandiose, ill-starred attempt
To conquer Greece - they treat it with contempt;
And only incidentally refute
Major Greek claims, by stressing what repute
The Persian monarch and the Persian nation
Won by this salutary demonstration:
Despite a strong defence and adverse weather
All arms combined magnificently together.

The "official" Persian version may perhaps feature in the account by Dio Chrysostom. He quotes the testimony of a fictitious Mede, who claims that the mission entruted to Datis and Artaphernes was to sail against Naxos and Eretria. Marathon was an insignficant failure, cancelled out by his son Xerxes' glorious victory at Thermopylae.

But the Battle of Marathon was represented, first by the Athenians, and then by the Greeks, and later by Europeans who admired Greek civilisation, as a mighty confrontation between east and west. One of a series which had begun with the war against Troy, and which has continued.

The Battle of Marathon was chosen by Sir Edward Creasy in 1851 as the first of his “Decisive Battles of the World: from Marathon to Waterloo”. He said “on the result ... depended the whole future progress of human civilisation”.

For the record, here is the Greek version. According to Herodotus, the Persians sailed across the Aegean, and landed in the bay of Marathon. A force of 9000 Athenians - all the available men - went out to stop their army marching on Athens. A runner was sent to get help from the Spartans, but they arrived too late.

The Athenians attacked the barbarians, running at them. There were at least 8 stades [1.5km] between the armies. The Persians, seeing them running towards them got ready to meet them. They thought they were mad, suicidal, seeing how few they were, charging at them with no cavalry or archers. This is what the barbarians thought. When the Athenians got in close and engaged with the barbarians, they did well. They were the first Greeks I ever heard of who ran at the enemy, and the first who coped with seeing Median dress and men wearing this dress. Previously Greeks had been afraid even of the word “Mede”. 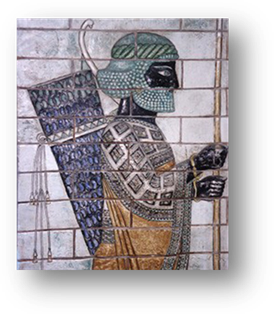 A Persian warrior in Median dress from Susa

While they fought at Marathon, much time elapsed. The barbarians won in the centre, where the Persians and the Sakai were stationed. Here the barbarians won and having broken through chased the Greeks inland. But the Athenians and the Plataeans won on both wings. When they won here, they allowed the barbarians who had been beaten to escape, but joining the two wings together they fought with those who had broken through their centre. And the Athenians won. They pursued the Persians who were running away and cut them down. When they reached the sea the Greeks called for fire and tried to grab hold of the ships.

During this assault, the [Athenian] general was killed and Kynegeiros the son of Euphorion trying to grab hold of one of the ships had his hand cut off with an axe and died, as did many well-known Athenians. The Athenians captured 7 ships in this way, but the barbarians managed to launch the rest, picked up the Eretrian prisoners from the island where they’d left them, and sailed round Sounion, hoping to get to Athens before the Athenians did; but the Athenians got there first. The barbarians anchored off Phaleron and then sailed back to Asia.

In this battle at Marathon there died around 4,500 barbarians and 192 Athenians.

The Athenians won by allowing the Persians to push back their centre, so they could surround them with their wings. The Persians tried to escape, but were slaughtered as they scrambled to get back on their ships. One mystery is what happened to the Persian cavalry. Herodotus doesn’t mention it in the battle, despite saying the Persians chose to land at Marathon because they’d be able to use it.

According to the story which was told about the battle, a messenger ran back to Athens. He is supposed to have said two words: “khairete. nenikekamen.” before dropping dead.

This messenger, Philippides (or Pheidippides in some sources) isn't even one of Herodotus's stories: he’s first mentioned by a writer several hundred years later. But so important was the victory for the Athenians that the truth became obscured by stories to glorify Athens even more. The Spartans did arrive, after it was all over. The Athenians’ tomb is still there on the site of the battle. It has never been excavated. It is treated like any other war memorial. 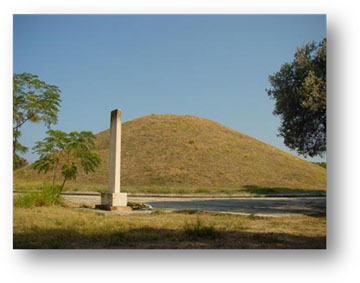 Burial mound for the 192 Athenians killed Marathon in 490 BC

In honour of this victory,and to commemorate Philippides' run, a long distance race called "The Marathon" became a key event when the ancient Greek Olympic Games were revived in 1896, by a Frenchman who admired what he believed to have been the culture and civilisation of the ancient Greeks.

The “Marathon” distance was set at 26 miles 385 yards (believed to be the distance between the battle site and Athens). There's a story - probably untrue - that the distance was increased in the 1908 London Olympics so the race could finish by the royal box! There was no Marathon in the ancient Olympic Games, and, perhaps not surprisingly, there was no Marathon when the 1974 Asian Games were held in Tehran.

NEXT: THE GREEKS - AND THEIR PECULIAR BELIEFS

Battle of Marathon: a minor skirmish or saviour of civilisation?

Darius' attempt to punish the Athenians for daring to help the Ionians is unsuccessful. At the Battle of Marathon (490 BC) the Athenians drive the Persians off - and win a victory whose name is still celebrated in the modern Olympics and elsewhere. But maybe it was no more than a "trivial skirmish". 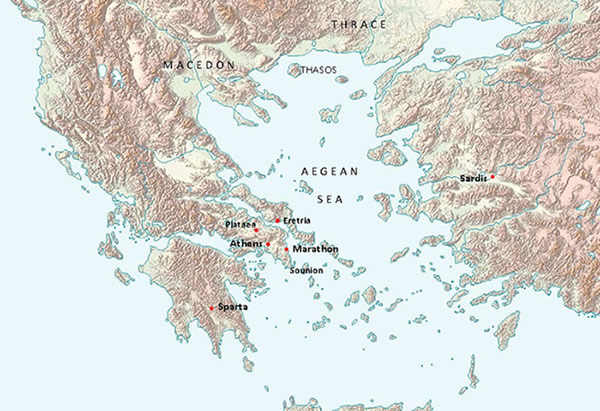 These were symbols of complete surrender. Athens and Sparta both killed the Persian messengers who came to them.

This ridiculous eurocentric view has been extraordinarily persistent. For a definitive refutation I recommend Peter Frankopan's The Silk Roads (Bloomsbury 2015)

Or Saca: an Iranian nation ruled by the Persians - in the far north east of the empire in modern Afghanistan and Turkmenistan. See also Scythians

A contingent had come to help Athens from Plataea, a small town to the north. They were the only Greeks who did so.

Another small city. They were the only ones apart from Athens who had helped the Ionians in the Ionian Revolt. They had already been punished for this.

Herodotus mentions him, because he was the brother of Aeschylus, a poet famous for his plays - including The Persians. Aeschylus too fought in the battle - his epitaph records this, while not mentioning his plays at all!

The nearest beach to Athens. Later the Athenians developed one of the finest harbours in the Mediterranean a little way down the coast at Piraeus - still an important port today.

Rejoice! We have won!