A tantalising archaeological site in Gilan province, close to the Caspian Sea in northwest Iran - tantalising because the remains show it was the cemetery of a rich and important settlement - but there's no actual evidence to connect it definitively with the earliest Indo-European speaking Iranians to arrive on to the plateau. The site was occupied between around 1250 BC and 750 BC 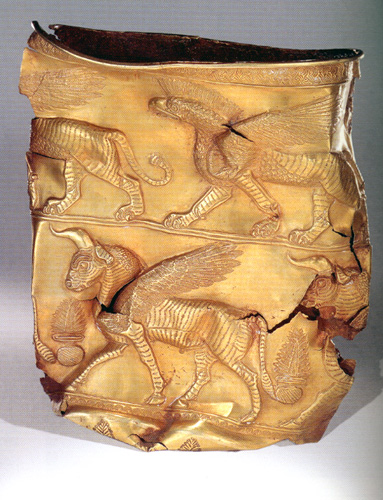 Like several other sites (Jiroft, for example) its existence was originally suspected because of looted treasures appearing on the international antiques market. Excavation was part of an attempt to locate the source of the large number of pottery vessels, ceramic images, arms, jewellery and gold and silver vessels sold since the 1930s. This material, known as ‘Amlash’ after a market town on the Caspian, was assumed to have been acquired illegally.

Marlik was officially excavated in the 60s - 53 stone-lined tombs were discovered, ranging widely in structure, size and type of stone used - the largest are entirely of imported stone. Many impressive grave-goods were unearthed, most notably some beautiful golden cups, decorated with animal motifs in high relief. Objects from the Ziwiye hoard (found near Lake Urmia in 1947) have also been associated with Marlik and Hasanlu: items are currently widely scattered among different collections, and some are thought to be forgeries - but they do suggest the "missing link" between the "Scythian" animal style of the Steppes, and later art from the plateau.

The abundance of "horsey items" (and horse-burials) at Marlik strongly suggest that the interred were from a people who migrated from Central Asia around 1750 BC - there's no way to tell what language they spoke - but the culture seems to be Indo-European. The details on some artifacts (as the griffins and winged bulls on the cup illustrated) are thought by some to connect Marlik with Hasanlu and the Mannaeans (and thus possibly with the Medes - but Hurrians and Mitanni are mentioned by some). Although the motifs derive ultimately from Assyria, it seems possible that similar fantastic beasts found in Achaemenid art (and in the art of Urartu) came via the Mannaeans or Marlik rather than directly from the Assyrians.

NEXT: THE FIRST INDO-EUROPEANS?

An elite cemetery in NW Iran, possibly the source of looted treasures. The artifacts found in the tomb - with connections to horses - suggest connection with the Steppe, and also with the Yamnaya culture, and thus the people buried here could have been Indo-European speaking - and fore-runners of the Medes and Persians. 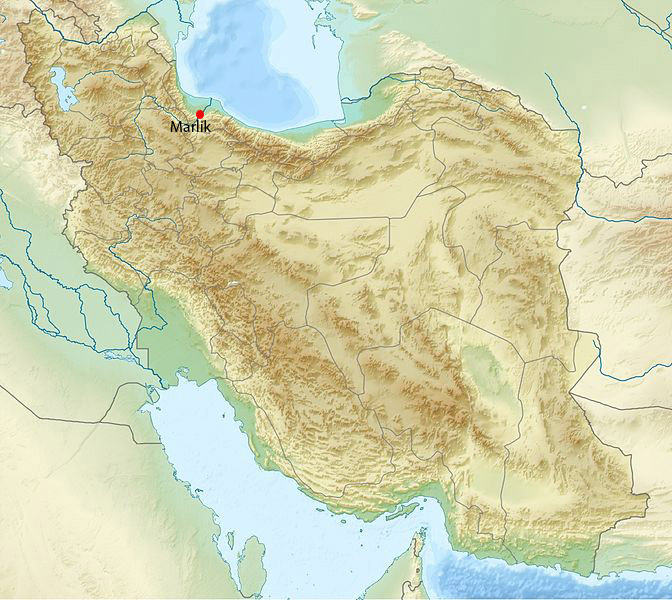