Iran was again under Muslim rule after an interval of around 75 years. An era of religious diversity and tolerance was over. On the first day of his reign, Ghazan ordered the destruction of all churches, synagogues and Buddhist temples in Baghdad and throughout his domain, and forced the non-Muslim elite to convert. There was a burst of savage persecution of minorities. Turbans were to be worn - the broad-brimmed Mongol hats were banned. Christians and Jews had to wear distinctive clothing. But, after Nauruz was exposed as a traitor secretly negotiating with the Mamluks, Ghazan gradually began to revert to a more traditional tolerant attitude. And he needed tolerance himself from the Muslims, when he insisted on marrying a woman once married to his father and his uncle. 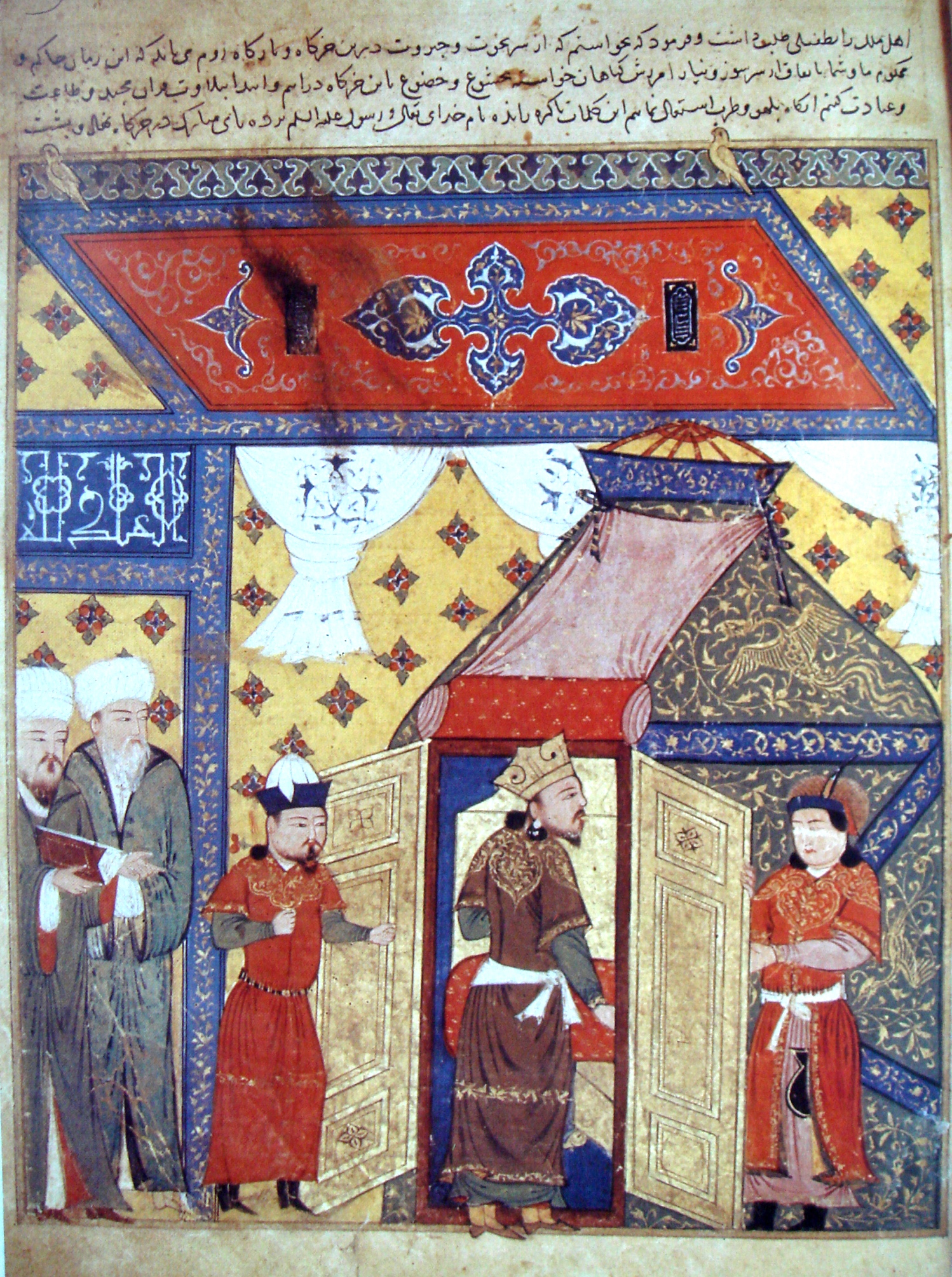 Ghazan (centre) is converted to Islam - Timurid period (not contemporary).

After his wedding, Ghazan was installed as Il-Khan in Tabriz, and took the Muslim name Mahmud. Nauruz was confirmed as his commander-in-chief. He's generally thought of as the greatest of the Il-Khans. He was certainly an improvement on his latest predecessors - but his reputation has been greatly enhanced by his recognition as the restorer of Islam - and the fact that he appointed Rashid al-Din, who wrote the history of this reign, as his vizier. Rashid rescued the economy of the Il-khanate from its desperate position: he attacked corruption, reformed the tax system (it had been both unfair and inefficient), resettled the agricultural land which the peasants had deserted since the invasion, and repaired the qanats, which had either been damaged in the conquest, or left to deteriorate. Ghazan commissioned Rashid to write a great history of the world - from the Mongol point-of-view. He continued and expanded it under Öljeitü.

He made four attempts to defeat the Mamluks. In 1299 he won a great victory at Homs, but his failure to follow it up allowed the Mamluks to recover Syria in 1300. In 1301 rain stopped play. In 1303 his army was heavily defeated. The fourth attempt was interrupted by his death in 1304.

He was 32 when he died from a long-standing illness - a man with an amazing spread of interests, skills and talents. According to Rashid al-Din he was interested in natural history, medicine, astronomy and alchemy: he could work as a goldsmith, blacksmith, carpenter, painter and metal-worker as well as any craftsman. He was a linguist, knowing some Arabic, Persian, Hindi, Kashmiri, Chinese, Tibetan and "Frankish" (?Latin). He was an authority on Mongol history - hence his encouragement of Rashid al-Din. He actively encouraged Islam (he inclined towards Shi'ism) - building a mosque in every village, founding institutions for the poor in the towns and in Mecca, and hostels for the sayyids - even a shed where birds could shelter in the winter! Physically he was less imposing:

"Among all the host of 200,000 Tartars you should scarcely find one of smaller stature or of uglier and meaner aspect than this Prince"

His religious journey is fascinating. He was christened Nicholas, and started life as a Christian. He converted to Buddhism, before becoming a Sunni Muslim, following first the Hanafi school and then transferring allegiance to the Shaf'i - two sects that differed on the acceptance of non-Arabs. Finally, fed up with their disputes, he accepted Twelver Shi'ism (but possibly eventually went back to Sunnism).

Early in his reign, he received news from the Great Khan Temür (successor and grandson of Qubilai) that all the quarrels between the branches of Genghis Khan's family had been patched up - and wrote to tell Philip IV of France the good news.

Öljeitü's foreign policy is marked by two failures: the murder of the king of Cilicia by a rogue Mongol general, and Öljeitü's lack of concern, led to the permanent loss of Armenian Cilicia as an ally, and expulsion of all Mongols. A final attempt which he led in person to oust the Mamluks from Syria ended in disaster. The Mongols thereafter gave up all interest in Syria. Despite a reply from Edward II in 1307 wishing Öljeitü well in his plan to exterminate "the abominable sect of Mahomet". and another from Pope Clement V, no help ever came from the Christian west. 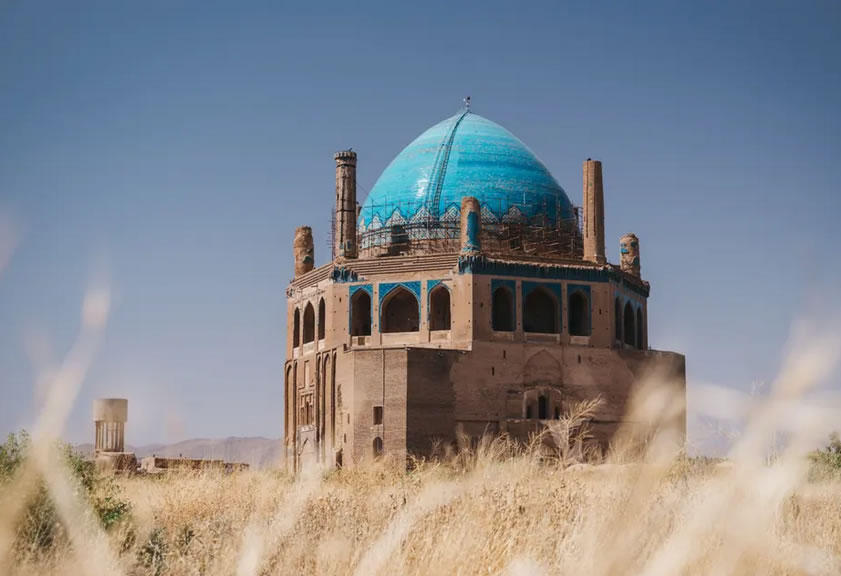 Oljeitu's mausoleum at Sultanieh. It's is the third largest brick dome in the world (behind the Duomo, Florence and Hagia Sophia - and has an octagonal ground plan based on the Dome of the Rock, Jerusalem.

He moved his capital from Tabriz to Sultanieh, now a small town on the way to the Caspian. There he built the Gunbad-i Ali, which he intended to house the remains of the martyred Ali and Husain, bringing them from Najaf and Kerbala. When this project failed, he decided it would be his mausoleum. He had his architects study the Sasanian palace at Ctesiphon and thousands were involved in building it, over eleven years. He died aged 35 in Sultanieh - from complications caused by excessive drinking, like several of his predecessors. 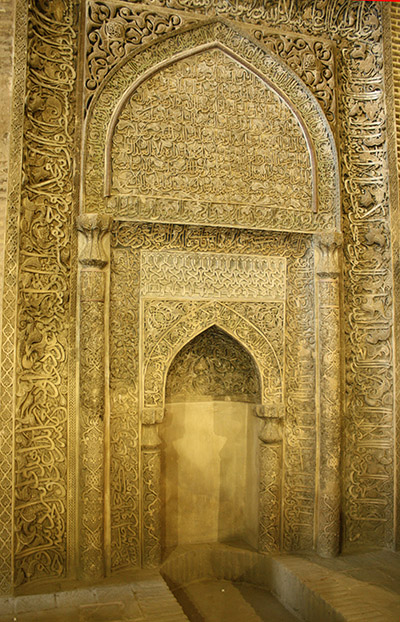 Oljeitu's Mihrab in the Friday Mosque in Isfahan. Dated 1310 - it's the most elaborate example of Mongol plasterwork in Iran (AMW).

Abu Sa'id was only eleven when his father died, naming him as heir. The Amir Choban, who'd been recently promoted as Öljeitü's commander-in-chief had the real power, and now conspired with his vizier Ali-Shah to discredit the irreplaceable Rashid al-Din. He was accused, with his 16 year old son, of poisoning Öljeitü, and both were executed. His head was exhibited in Tabriz with cries of "This is the head of the Jew who abused the name of God: God's curse upon him!".

Choban was responsible for fighting off invasions by the Golden Horde, and for making peace with Mamluk Egypt, but was also responsible for the beginning of the breakup of the Il-khanate, as he quarrelled with two of his own sons, and with other Amirs, notably Hasan-i Buzurg. By 1324 Abu Sa'id was "king only in name" as Choban parcelled out the realm between his other sons. Abu Sa'id was now 21 - and he had fallen for Choban's daughter, a girl called Baghdad Khatun ("Miss Baghdad"), who was already married. Under Mongol tradition, the khan had a right to any married woman he took a fancy to. Choban was unhelpful. Abu Sa'id now turned violently against him and his family. With the help of rival Amirs he cornered him, captured him, and ordered his execution. Abu Sa'id married Baghdad Khatun, forcing Hasan to divorce her. Choban's surviving son TemÜr escaped and was offered asylum by the Mamluk sultan - who however had him killed to keep on terms with Abu Sa'id. Abu Sa'id continued to have family problems. Hasan, his wife's former husband, was accused of an assassination attempt, but cleared and sent as viceroy of Rum. Baghdad Khatun, allegedly, became jealous of Abu Sa'id's attentions to her niece (who later married Hasan!) and poisoned him as he was on his way to deal with rumours of an intended attack from the Golden Horde (1335).

He was tall, "generous and witty"; he was a good musician and a poet. In religion he was tolerant, allowing a bishopric to be established in Sultanieh, though he rejected the Pope's appeal to become a Christian himself. He was a capable ruler, but, simply because he left no heir was the last of the Il-Khans. The Il-khanid state very quickly collapsed.

The great period of the Persian miniature began under the Il-Khans. Despite the huge destruction of life and property, the new court had a galvanising effect on book painting, importing many Chinese works and probably artists, with their long-established tradition of narrative painting. The Ilkhanids continued to migrate between summer and winter quarters, which together with other travels for war, hunting and administration, made the portable form of the illustrated book the most suitable vehicle for painting. The Great Mongol Shahnameh, now dispersed, is the outstanding manuscript of the period.

Disintegration of the Il-Khanate

There were nominally eight successors, but the state was in reality carved up between 15 or so minor dynasties, founded by the Amirs whose power had been gradually encroaching on that of the Il-Khan. The most successful were: the JalayIrids, founded by Hasan-i Buzurg, the former husband of Baghdad Khatun, (She had been put to death for conspiring with the Golden Horde, and poisoning of her second husband.)

Had a strong leader emerged, the Il-khanate could well have continued: without one, it just fell apart. During the thirty years of unrest and uncertainty which followed the death of Abu Sa'id the Black Death passed through on its way to Europe - to add to the disruption, and accelerate the dissolution of the Empire. These three decades saw local dynasties rise and fall, with none strong enough to out-muscle the others. There were the Jalayirids in Azerbaijan and Iraq, who overthrew the Chobanids, the family of Choban. The Muzaffarids controlled Fars and Kirman, with a capital at Shiraz - they briefly took Azerbaijan, and until crushed by Timur, looked possible contenders to unify the Mongol dynasties . Further east were the Karts based in Herat (Afghanistan) and the possibly proto-Marxist Shi'i republic of the Sarbadars in Khorasan, who demonstrated a spirit of Iranian popular resistance to invaders which had sparked briefly after the Arab invasion. The Golden Horde to the north was also disintegrating at about the same time, mainly due to the Black Death. No one from within the Il-khanate seemed likely to reunite it - but to the east lay the Khanate of Chagatai - and from there someone was soon to pounce....

A succession of interesting and distinctive rulers - whose characters and interests ultimately sacrificed the unity of the Mongol empire in Iran. It disintegrated into a number of small pieces, which were soon to be picked off by Timur. 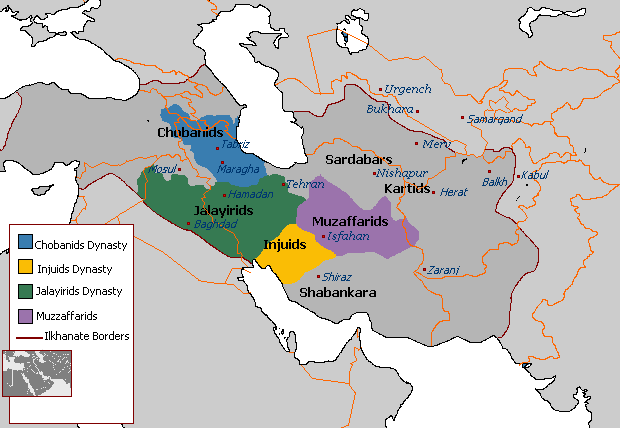 The patriarch of the Church of the East,, Mar Yaballah, had been imprisoned by Ahmad and only released thanks to Ahmad's Christian mother. Arghun had needed his spiritual help to get aid from Europe, and he'd baptized his son, Nicholas (later Il-Khan Öljeitü) but now under Ghazan he was incarcerated and tortured again - but saved by the intervention of the visiting Cilician king. He was again badly treated by Öljeitü in 1310 when he was driven from his refuge, and his followers massacred.

A custom observed by his father, grandfather and great grandfather. Hülegü's Christian wife had been previously married to his father Tolui.

The Twelvers, as opposed to the Fivers (Zaidis), Sixers (Jafaris), and Seveners (Ismailis), believed that the Twelfth Imam, currently "hidden" would one day return and lead Islam. Öljeitü may have wanted to differentiate himself from the hated (Sunni) Mamluks - Shi'ism later emerged from the Sufi Safavviya order (founded around this time) when the Safavids (1501 - 1736) made Twelver Shi'ism the state religion of Iran.

Research has established that Rashid al-Din al-Hamadani, "the greatest vizier of the Il-Khan dynasty" was in fact of Jewish origin. He converted to Islam at age of 30. His Jami' al-tawarikh has been called the first world history. Only a small fraction of the lavishly illustrated 3 volumes - which covered Europe and China as well as the Mongols - survives.

In fact to Hasan, later founder of the Jalayirid dynasty.

Historians have speculated that if he'd survived, he could have founded a Mongol state in Anatolia, and perhaps prevented the rise of the Ottomans!

The second incumbent from 1323 was an Englishman, William Adam.

They remained in contention in Azerbaijan until 15th century. Hasan captured Baghdad in 1340.

The pandemic of 1345 - 1353 - bubonic and pneumonic plague caused by the bacterium Yersinia pestis spread throughout Europe, the Near East and North Africa from Central Asia. The fur trading Mongols of the Golden Horde may well have been a major source of transmission, as trade routes became plague routes. Mongol troops from the Golden Horde besieging the Genoese port of Caffa in the Crimea in 1347 catapulted infected corpses over the walls. Genoese refugees then took the disease to Mediterranean ports. At least one third of the population of Europe and Western Europe is estimated to have died.