"The least-known part of Arabia"

Most of Oman's inhabitants live in the wide coastal strip between the Indian Ocean and the Al Hajar mountain range, the highest in Arabia. The interior is largely gravel desert, and sparsly populated. There is some doubt whether the opposite coast (modern Baluchistan) was linked with the southerly state. Both were given the name Makran at various times.

There is much evidence of early cultures in the area of Oman and the Emirates. Discoveries reveal links with Mesopotamia, Iran and the Indus Valley, proving that a trade in copper developed from around 3000 BC. The archaeological site at Mleiha, now in the emirate of Sharjah - whose oldest remains date from the migration of homo sapiens out of Africa around 130,000 ya - has been a rich source of finds from prehistory down to the Middle Ages. A recent (2021) discovery was a hoard of 409 3rd century BC silver coins, locally minted but some resembling coins of Alexander and the Seleucids. Mleiha may well have been the chief city of Oman at this time.

The Archaeological Museum in Mleiha, Sharjah, overshadowed by Fossil Rock

A Sumerian source refers to the home of the Magan people. A hieroglyphic text on the Egyptian-made headless statue of Darius found at Susa lists the lands subject to the king; the last of them, next to India, is the mysterious Maka. It's generally supposed to have been on the Persian Gulf - but which side? Was it the Arabian, the Persian - or both? The Periplus Maris Erythraei (Circumnavigation of the Erythraean Sea - ie the Indian Ocean) would suggest on the Persian coast, while Pliny (NH.6.32) seems to suggest the Arabian side (where the modern state of Oman is located). Whatever, it was an Achaemenid possession, and later a Parthian and Sasanian one. Modern opinion tends to disfavour the identification with the barren unpopulated area of Carmania/Gedrosia (Baluchistan). Alexander nearly came to grief here, and his general Nearchus tells that Cyrus lost an army trying to reach India this way. A location in Oman would have had strategic importance, and commercial value, being on the trade routes from the east..

Uman "on the other side of the sea" is numbered by Shapur I, on the Ka'ba-ye Zartosht inscription as one of the kingdoms he ruled (although he also includes Makran, among eastern provinces). It was settled, not just garrisoned as an outpost on the route to Yemen. Agriculture was developed through the digging of qanats.

There was a tradition that inland Oman was settled by Arabs of the Azd tribe from Yemen, after a collapse of the Marib dam in the 3rd century AD. There is much confusion about how and when various Arab tribes arrived - a source refers to a defeat of Bahram, son of Darius as the Persian king at the time, two rulers 800 years apart! Archaeologists have revealed the existence of a culture in Oman which they named Samad, after a major site. Artifacts found suggest it flourished, in various phases, right through the pre-Islamic period, from the Achaemenids to the Sasanians - though the record is far from complete. It appears to have been regulated by treaties with the Sasanians. A Samad culture survived the arrival of Islam until around AD 900.

Islam came very early to Oman, as it did to Yemen. Quite soon though, Oman acquired its own variation, neither Shia nor Sunni - Ibadism. . Its founder was a Kharijite, in Basra, around AD 650, who influenced wealthy Azd merchants from Oman who had settled in Basra to adopt it. Political upheavals in Iraq later forced the Omani Azd to return home, taking their faith with them - where it has remained dominant up to the present day. Important to the Ibadis is that the Imam is elected, and must be supported by the community as long as he rules within the terms of sharia. It was under the political control of the Umayyads: after their fall, Oman became an independent Imamate (c. 750), whose power eventually extended throughout the Gulf, controlling trade between the Abbasids and Africa, until ended by the Seljuqs. The Imams lost political power, but were to recover it in cycles over the next 1200 years.

In 1154, the Nabhani dynasty seized control from the Seljuqs, demoted the Imams to symbols (as the later Abbasids caliphs were) and presided over a flourishing trade, especially in frankincense across the desert and along the Gulf.

In 1507 the Portuguese captured Muscat: thereafter they competed increasingly successfully with the Nabhanis for control of the coast and its trade. The Ottomans challenged the Portuguese on occasion, but during the 17th century Omani fortunes began to revive - with a newly-invigorated Imamate - the Yaruba dynasty. The Yaruba not only drove out the Portuguese, but established an Omani empire in former Portuguese possessions in East Africa including Mombasa, Pemba and Zanzibar. Quarrels within the dynasty encouraged the interference of Nader Shah - which was successfully resisted.

As the Omani empire weakened in the 19th century, the British influence began to grow, Their interest in excluding rival European powers from the Gulf and routes to India led to a series of treaties with the Omani rulers. British control developed gradually and inexorably. When Zanzibar - the Omani sultans' preferred residence and most lucrative slave market - was made a separate sultanate, Oman's loss of revenue hastened the British takeover of finance and policy. By the end of the century, coastal Oman (the sultanate) was a British colony in all but name. The interior (the Imamate) was a different matter.

Treaty of Sib and Oil

After seven years of war between the Sultan in Muscat (backed by Anglo-Indian troops), and the Imam in the interior, the British brokered a treaty in which both parties accepted their limits: a single state called Muscat (the coast) and Oman (the interior). But the discovery of oil in the interior soon (in 1955) had the British abandoning the treaty, evicting the Imam, and the incorporation of his lands into the sultanate. The Imam's supporters resisted and were finally routed by the British in 1959. Meanwhile the last Imam had died (1954) marking the the end of a viable Imamate. The traditional dominance of the coast had been reversed, thanks to oil.

In 1965, a separatist movement, inspired by the Sultan's repressive regime, broke out in Dhofar - the furthest south area of Oman bordering on Yemen. The rebels, after they identified with the new socialist Republic of South Yemen got support from China and USSR. The war dragged on, because the Sultan's forces - though backed by the UK and Iran - were inadequate for the task. Qabus replaced his father in a coup (1970), and his more sophisticated approach led to victory in 1975. Qabus opened up his country, modernised, and fostered friendly relations with his neighbours - including both Iran and Israel. His long reign brought stability and prosperity to Oman.

The Gulf coast of modern Sultanate of Oman, extending into the UAE, was probably part of the Achaemenid and Parthian empires, and was certainly ruled from Iran by the Sasanian period. Geologically, it's the extension of the Zagros mountains - and has been linked politically and culturally with Iran rather than Arabia. 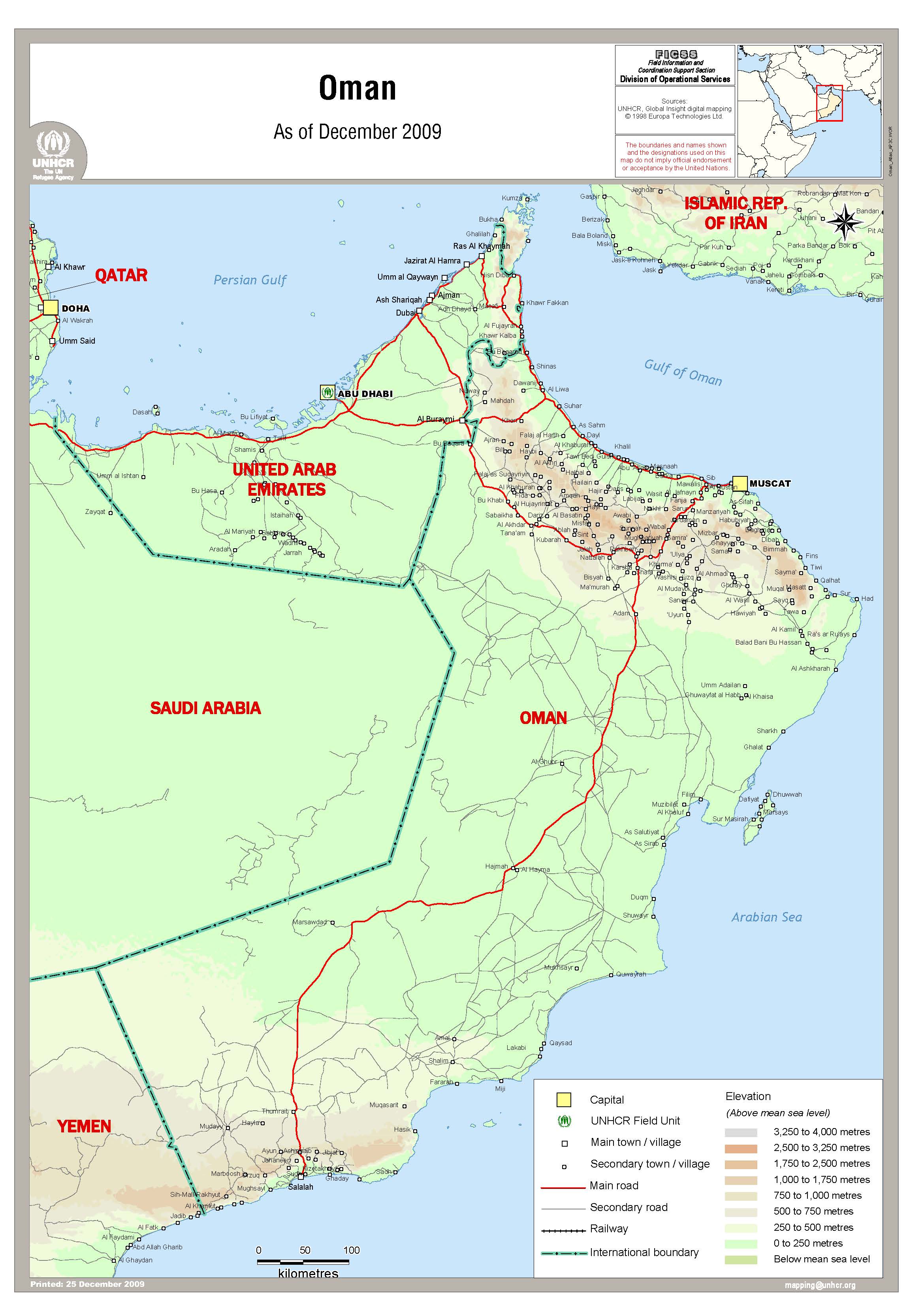 "This unpatrollable region, which no army could easily traverse without heavy loss, was probably of as little interest to the Achaemenids as it seems later to have been to the Arabs of the eastern caliphate."

Their founder was a Kharijite, but the Ibadis disclaim connection with this "extremist" sect notorious for their often violent opposition to the caliphate. Ibadis believe Islam should not be ruled by a descendant of Muhammad's family, as, differently, do both Sunni and Shia. The Ibadi communities appoint their own Imams - ideally the most pious member, who is also qualified in Islamic law, and in military matters. There were complex arrangements for when such an individual was unavailable! Righteous Ibadis are the only true Muslims - and are encourage to "disassociate" with unrighteous Ibadis, other Muslims, and non-Muslims. Nevertheless, a relaxed spirit tolerance of others is usual. Their theology is similar to Mutazilism - reason trumps belief, and is prepared to interpret the Qu'ran where necessary in symbolic terms. Most Ibadis live in Yemen, though communities are also found in North and East Africa.