When Reza Shah's son Muhammad succeeded him in 1941, Iran was superficially in a not-very-different position from where it had been under the later Qajars - occupied and apparently dominated by foreign powers: once again by the British and the Russians, with the Americans now also eager to get in on the action. The young Shah was ignored when the leaders of the occupying powers, Churchill and Stalin plus Roosevelt, met in Tehran in 1943 for a conference to discus the allies' next move against Hitler. 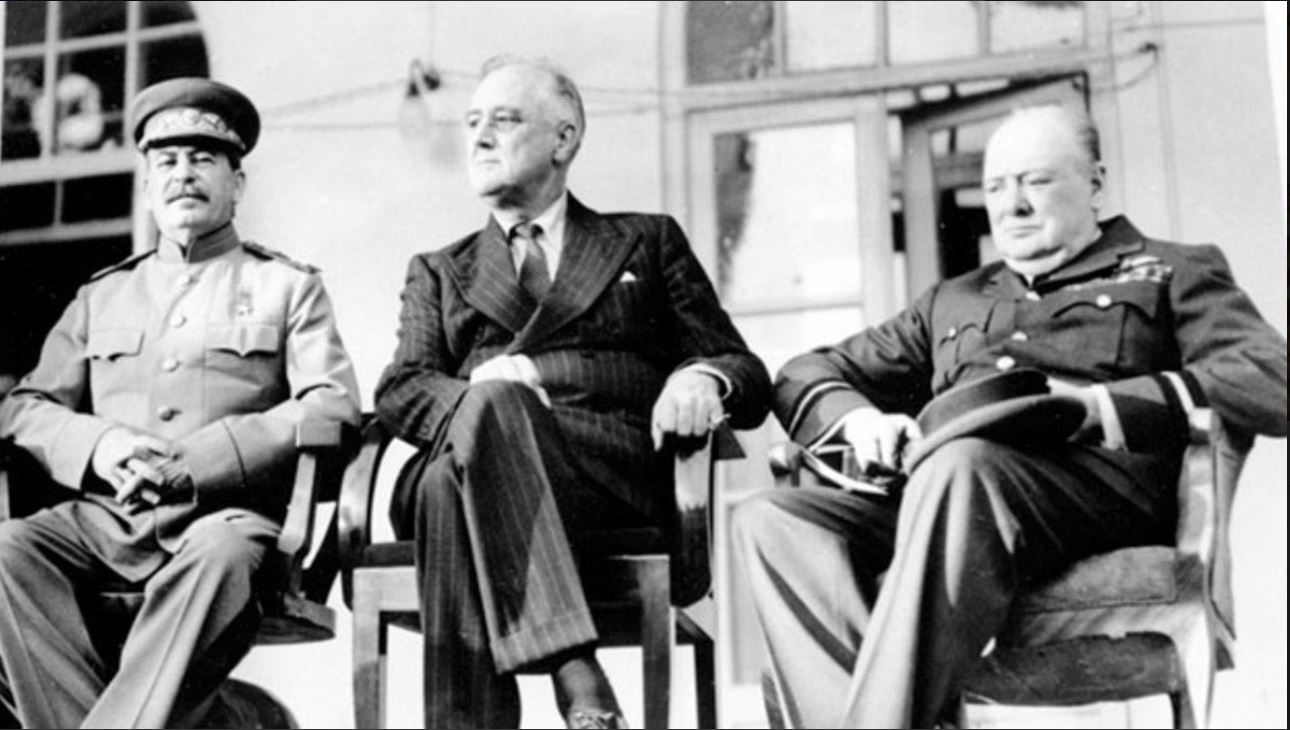 But the Shah's rule, for the time being as ostensibly democratic as Iran had ever experienced, was now having to accommodate new and perhaps unwelcome ideas, in the form of nationalism and Marxism. 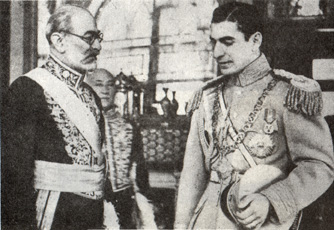 During his early years, the young shah was a constitutional monarch, in the European mould - a figurehead, while executive power remained with the Majlis, supervised initially by the Prime Minister Muhammad-Ali Foroughi (1941 - 1942). During this constitutional period of the shah's rule, Iran, with a free and prolific press, experienced more political freedom than at any time to date. But discontent was emerging from two political parties - parties in themselves being a novelty in Iran:

Only slowly did a number of organisations coalesce to form the National Front party, founded by Muhammad Mossadeq in 1949 - all members supported its main agenda: the nationalisation of the oil industry, but differed profoundly on other issues. The movement thus began to fragment and weaken, and after it failed in its primary objective was eventually defeated. It was banned, but revived during the 60s, and became the leading secular opposition to the shah. Not all "nationalists", though, were members of the National Front: there was a more effective vehicle:

Unlike the National Front, the Marxist Tudeh Party ("Party of the masses") was well-organised, and successful in attracting support from a wide spectrum of Iranians. It was popular with the working class and trade unions, but also with the new middle-classes - teachers, students, writers, artists, professionals and junior army officers (the army leadership, along with the ulama remained staunchly conservative). Despite its wartime anti-Fascist origins, and early backing by the Soviets, Tudeh played down its Russian connections, and presented itself as the only party promising wholesale reform: for labour, women and the countryside. Education was a major theme - the Tudeh was very keen to introduce Iran to western ideas, particularly via Farsi translations of European fiction. Nationalist feeling was fostered by the continuing influence of the three occupying powers: 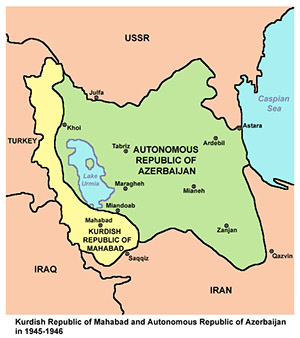 Britain, the US and the USSR

Britain saw its position weakened by the rise of nationalism. The US tried to exploit this weakness for its own profit. Both powers made the error of trying to operate through the shah and conservative elements. Russia was more successful to begin with, because of its support for the popular demands of the Tudeh Party. But Russian backing for independence in Azerbaijan and Kurdistan backfired:

Russian troops lingered in the Caucasus after the end of the war, and oversaw the creation of independent entities in Azerbaijan and Kurdistan. Immediately their new governments began to innovate - in use of local languages, votes for women, land reform - but in 1946 the Red Army abandoned its proteges, as Russia preferred to do a deal for oil with Tehran. Prime Minister Qavam, "the Old Fox" was the brains behind the removal of Russia. The Iranian forces moved in, and reclaimed the territories with much brutality. Russia never got its oil concession. 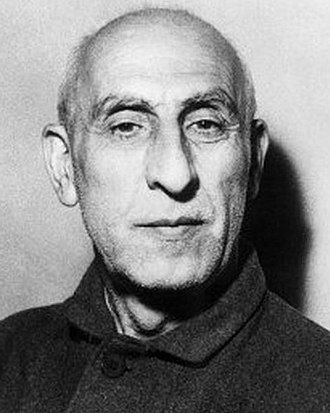 Muhammad Mossadeq, born in 1882, was the youngest elected member of the First Majlis (1905 - 1907) - too young in fact to be allowed to sit (members had to be 30). He had Qajar connections, and had studied law in Europe. He opposed the Anglo-Persian oil deal in 1919. He retired from politics in 1925, having failed to prevent Reza Khan becoming shah, and been imprisoned for his views. In 1949, he founded the National Front, a coalition of parties opposed to the continuing British monopoly of the oil industry. In 1951, the National Front won power in the Majlis. Important social reforms were introduced: sick pay for factory workers, abolition of forced labour, a Land Reform Act which made landlords set aside funds for tenants' benefits. In March the AIOC was nationalised, its 1933 concession cancelled, its assets seized. In May Mossadeq was named Prime Minister. In a speech in June, he claimed:

With the oil revenues we could meet our entire budget and combat poverty, disease, and backwardness among our people ... By the elimination of the power of the British company, we would also eliminate corruption and intrigue ... Iran will have achieved its economic and political independence.

The British retaliated by evacuating its technicians and shutting down production, beginning an effective naval blockade of Abadan, and imposing sanctions. Oil production stopped, and both Iran and Britain suffered - but Britain was able to source oil elsewhere, while Iran had no way to replace the lost income - and had as well to pay to maintain the costly oil infrastructure. The US initially seemed sympathetic to Mossadeq, who hoped that they might mediate to break the stalemate. But they refused his request for a loan - fearing communist involvement. Cracks meanwhile were appearing in the National Front coalition, as some elements wanted to exploit the situation caused by the worsening economic crisis. Unity was temporarily restored when the Shah sacked Mossadeq for exceeding his powers - he'd wanted to appoint a Minister of War to deal with the unrest. The National Front and the Tudeh organised mass demonstrations in Tehran, which forced the Shah to reinstate him (July 1952). Mossadeq pushed home his advantage by breaking off relations with the British, and demanding emergency powers to deal with the financial crisis and initiate a programme of reform.

Mossadeq's triumph was scuppered by news that US President Truman and British Premier Churchill had done a deal. Any hope of American support against the British was gone. A British plot against Mossadeq (led by senior generals supporting the Shah) was thwarted, but its leaders went largely unpunished. General Fazlollah Zahedi began conspiring with the British and the Islamist leader Kashani (October 1952).

In January 1953 Mossadeq extended his emergency powers, which he used to undermine the Shah further - the government would allocate his budget; he should give his properties to the state. But in February the anti-Mossadeq conspiracy began to act. Mobilised by Kashani, a pro-Shah mob stormed Mossadeq's house, forcing him to flee in his pajamas. In March the new US President Eisenhower began to support the idea of a coup against Mossadeq - and the Tehran CIA station was given funds to plan his removal. Meanwhile prominent supporters began defecting, and a pro-Shah movement organised by Mossadeq's opponents and the US gathered momentum.

In May Mossadeq made a second move to undermine the Shah, curtailing his power, cutting his budget, and nationalising royal land. His twin sister Princess Ashraf , regarded as the power behind the throne, was exiled. But opposition to Mossadeq was mounting. The Tudeh Party added its muscle to support him - which gave his enemies the opportunity to paint him as pro-Communist and anti-Islam. In June 1953, US gave green light to Operation Ajax - to carry out the planned coup. Pro and anti Mossadeq forces were clashing in the Majlis, and in the streets of Tehran. The Tudeh organised an anti-Shah demonstration attended by 100,000 people - giving Mossadeq authority to carry out a referendum, which would dissolve parliament and hand Mossadeq unprecedented power. He received 99% of the votes - but his control was undermined by the dire economic situation. 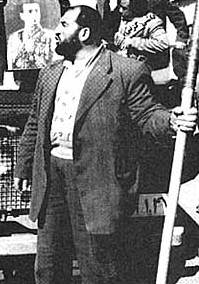 The plot was hatched between the CIA, Princess Ashraf and the US ambassador in Switzerland in early summer on 1953. On August 12, the Shah signed a decree replacing Mossadeq with Zahedi. But Mossadeq was tipped off, and the plot failed - loyal elements of the army foiled the attempt to arrest him, and a backlash ensued. The army took control of Tehran, while Tudeh-sponsored anti-monarchist demonstrations and broadcasts persuaded the Shah to flee - to Baghdad and then Rome. Looting and rioting ensued in Tehran and other cities - encouraged and paid for by the CIA., acting on begalf of the British and American governments. Mossadeq was yet to realise that the US was behind the coup - believing himself safe with the Shah gone. Duped by an American promise of aid if he did so, he ordered the army to clear the streets of rioters. On August 19 there was a huge pro-Shah demonstration, which ended with an attack on Mossadeq's house. General Zahedi appeared in the afternoon with 35 Sherman tanks. After a nine-hour battle, 300 were dead, Mossadeq had fled and his house was burnt down.

Mossadeq was arrested, tried by a military court and convicted of treason. His popularity saved him from execution, and, after serving a 3-year sentence in solitary confinement, he was allowed to live out his life under house-arrest until his death in 1967. He became a national hero to Iranians, who (rightly as is now clear) blame the CIA and the British for the coup. Throughout his career he consistently supported democratic rule and freedom from all foreign influence.

The Shah returned from Europe, but no longer as a constitutional monarch. He began losing the popular support he'd once had. His rule became personal and increasingly despotic, supported by America. America, once seen as a saviour, and counterweight to British and Russian influence, began to be seen as another self-interested exploiter of Iranian resources.

Ruled constitutionally until fatal clash with his Prime Minister Mossadeq in 1951-1953 over the nationalisation of the oil industry. Mossadeq lost, thanks to a CIA-led coup, and the Shah continued, but with American support.

Born 1875 - an academic, writer of allegedly Jewish origin who'd first been a member of the Majlis in 1909. He resigned as acting Prime Minister over the coronation of Reza Shah in 1912. After presiding over Iran's Supreme Court, he was Prime Minister again in 1935, but dismissed - returning for a third stint as a supporter of Muhammad Reza in 1941.

Born 1876, to a family with Azeri connections who'd served the Zands and the Qajars, Qavam was several times Prime Minister, with a record of success in times of crisis. He was appointed in 1946 specifically to handle the Azerbaijan problem.

The era of Joe McCarthy was approaching - hence the US strangely seeming to act against its own traditional sympathy with anti-colonialist movements. Nationalisation was approved by a democratically elected government, and fully supported by the people. Contrast US attitudes to the Suez crisis a few years later (1956). US-Iran relations have deteriorated ever since.

Documents declassified in 2017 reveal that meetings were held in 1952 between Sir Christopher Steel, deputy head of the embassy in Washington, and assistant Secretary of State for the Middle East, South Asia and Africa, Henry Byroade to discuss a coup to depose Mossadeq. Churchill, the British Prime Minister now nearing the end of his career was in favour: the CIA and MI6 did what they needed to.

Born 1892 into an aristocratic family with Safavid, Qajar and Zand connections. He served in the Cossack Brigade under Reza Khan, whom he loyally served as military commander, governor, and Chief of Police. Believed by the British to have German sympathies, he was interned in Palestine during WWII. He returned to favour as Minister of the Interior under Muhammad Reza, but was sacked by Mossadeq after being too zealous in putting down a pro-nationalisation demonstration. He was selected by Britain and the US to front the 1953 coup, after which he became Prime Minister. He married the shah's daughter, Princess Shahnaz. But he was sent abroad "for his health" when the shah worried that he was becoming indispensable. He died in 1963.

included elements of shady underworld - a gang led by one "Shaban the Brainless" was prominent in the violence. He provoked street-fights in support of the Shah - and was allegedly backed by Britain and the US.