Parthia: the Iranian revival and renewed conflict with Rome

In 2 BC, the young Phraataces, with the help of his Italian mother, poisoned his father Farhad IV, and proclaimed himself king Farhad V. Armenia once more claimed attention - Farhad V helped eject the pro-Roman ruler. The Romans intervened quickly - Augustus sent his grandson Gaius Caesar to do a deal (AD 1) - one favourable to Rome unsurprisingly. But finally, The Parthian Empire was recognised as an equal. But Farhad V had to give up claims to Armenia. The "Armenian question" was not settled yet.

Four years after becoming king, in AD 4, Farhad V and his mother were married. Coins show the happy couple:

Farhad V with his mother, co-ruler and wife, Mousa, "queen of heaven".

The Parthian nobles were not happy, however - and Farhad V was dethroned. After the brief reign of Orod III (AD 4 - 6), one of Farhad V's elder brothers - the ones educated in Rome - became king Varan I (Vonones). The "Roman" Varan's lack of interest in Parthian culture (not even in horses.) led to a reaction:

Ardavan II (Artabanus) was an old-style Parthian, who'd lived for a while among his nomad ancestors, the Dahae. His branch of the Arscacid family had long fought Varan I (Vonones) and his pro-Roman faction. Time to return to traditional Parthian horse-riding, hunting and feasting! He was the first king to attempt to undermine the apparently unchallengeable power of the noble families by exploring other sources of income and support. His Letter to Susa, intervening in the city's affairs, suggests he may have had a policy of strengthening his support in the cities. This may have had an effect with some Jewish Greek communities, but with Seleucia on the Tigris, still a thriving and prosperous Greek city, the policy backfired [see below].

After ejecting Varan I (who fled to Armenia and became its king) he demonstrated his willingness to defy the noble familes, iat least in Babylonia, where he allowed an independent Jewish state for 15 years to carve out a territory for itself, ignoring opposition. Rather ironically, after a short-lived Roman victory in Armenia [see below], Ardavan found himself a temporary refugee in Adiabene, whose king and ruling family had recently become Jews. Ardavan's position was strengthened by an agreement with Rome over Armenia, negotiated by Germanicus (stepson of emperor Tiberius AD 14-37) in AD 18.

The Roman historian Tacitus notes Ardavan's lack of respect for the Romans:

Showing his contempt for the senile and ineffective [Roman emperor] Tiberius... he boasted that he intended to invade the former territories of the Persians and the Macedonians, once held by Cyrus and by Alexander.

From now on, the Arsacid "Neo-Iranians" it seems ma y have felt entitled to claim the heritage of the Achaemenids, and a right to all the lands once ruled by Persia. A Roman attempt to take back Armenia in AD 35 forced Ardavan from his throne and to spend time as a wandering refugee, until he was reinstated with help from his Dahae and Saka allies. Peace was soon reinstated through L.Vitellius in AD 37. The Euphrates was recognised as the official frontier.

After Ardavan, there was a struggle between two of his sons. It was eventually solved by Godarz II (Gotarzes) who, with Dahae support, murdered his brother Vardan I (Vardanes), to whom Seleuceia had finally surrenderd. He also saw off Mehrdad (Mithridates), a grandson on Farhad IV who'd been brought up in Rome. Godarz cut off his ears, and commemorated his victory with another new inscription at Bisitun. Mehrdad had been supported by some of the Parthian nobles, who were disgusted by Godarz's cruelty, and had asked the Romans to intervene. 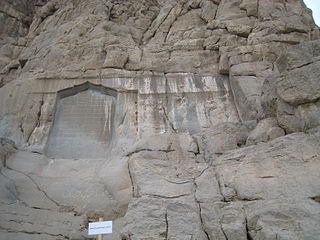 The Parthian reliefs at Bisitun.
They were partly obliterated by an Islamic plaque in the 17th century.

During the 1st century AD, Greek influence in Parthia began to decline - not without protest from the largest Greek city, Seleucia, which managed to become independent for seven years during the reign of Ardavan II . Kings no longer automatically called themselves "Philhellene" (Greek lover) on coins, and Pahlavi, the Iranian language spoken by the Parthians was now written using the Aramaic script, not the the Greek alphabet. 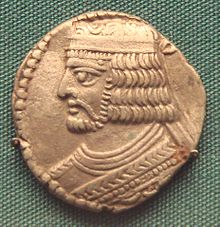 Under Valaksh I (Vologases) who became king in AD 51, ending a decade of unrest since the death of Ardvan II, and ruled until AD 80, a determined effort was made to revive Iranian culture and especially the Zoroastrian religion: Zoroastrian fire-altar motifs start appearing on coins, and Zoroastrian texts may have been collected together to form the core of the Avesta. The Silk Route through Parthia from China was flourishing. Valaksh I tried to lessen the importance of Seleuceia by expanding nearby Babylon, and founding a new city on the Tigris. Alexandria in Margiana (later Antioch in Margiana), a key city on the Silk Route now in Turkmenistan became Merv, and Susa's Greek spelling reverted to Shush.

The Armenian question (still with us): the Romans return

Valaksh I, after the usual struggle, established himself as king with the help of his brother Tirdat (Tiridates). Armenia was in chaos: there'd been an unauthorised Roman invasion which had recognised a usurper, Rhadamistus, as king. A second invasion to deal with the damage caused by the first one was called off, in case it provoked the Parthians. And of course it did just that. Valaksh I saw a chance to win back Armenia for Parthia. In AD 52 he invaded, took Artaxata the capital, and made his brother king - as a thank you for his help.

Problem: a condition of the peace made between Augustus and Farhad IV in 20 BC was that Armenia was in the Roman sector - and only Rome could choose the Armenian king. Valaksh I and his army had to return to Parthia to deal with problems there - and Rhadamistus came back to Armenia. But the Armenians preferred Tirdat, and made him king again. None of this pleased the Romans.

The Roman emperor was Augustus' great grandson, Nero. Scandalous as many of his antics in Rome seem to have been, in foreign policy his ideas were, from the Roman point of view, sound - and very traditional. From the time of Pompey's settlement in 63 BC, the Romans had tried to keep a swathe of "buffer states" (ruled by local kings owing their power entirely to Rome) between Roman provinces, such as Syria, and Parthia. Armenia was considered one of these states - it was seen as vital to keep Armenia Roman, to maintain a barrier between the two empires. 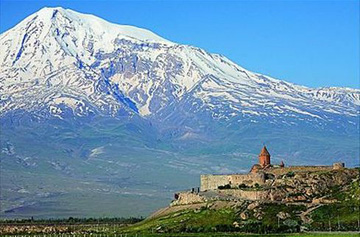 Mount Ararat from the site of Artaxata, Armenia

Nero sent his best general, Cn. DomitiusCorbulo, with a large and specially trained army to sort things out. In AD 58, Corbulo invaded Armenia. Tirdat fled from Artaxata, which Corbulo captured and burned. Corbulo next moved to Tigranocerta, the lowland capital which meekly surrendered to the Romans. A new king was nominated by Rome - Tigranes. Having seen off Tirdat's counter-attack, Corbulo marched back to Syria in triumph, and, as a reward, was made governor of Syria. Various of the client kings who'd helped the Romans were also rewarded.

Where was Valaksh? He'd had troubles in Parthia to settle - but was enraged to see a Roman puppet as king of Armenia. Now he was firmly in control at home, he invaded Armenia, and quickly undid all Corbulo's gains. Back to square one.

The Romans responded, as they had to. Fighting resumed - but the Romans found the well-trained Parthian cavalry much harder to deal with than the Armenians had. By AD 63, Corbulo was forced to compromise. Valaksh's brother Tirdat would stay as king, but would receive his crown from Nero in person, proving his loyalty to Rome. In future Armenian kings would come from the Parthian royal family, but be approved by Rome. 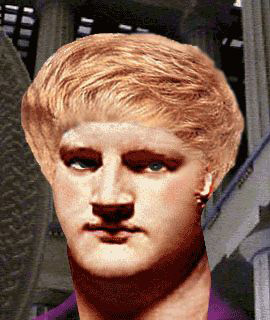 Tirdat's visit to Rome in AD 66 is recorded as a most magnificent occasion, with no expense spared: Nero came to meet him at Naples (he was travelling with his entire family and retinue of 3,000 horsemen). Games were laid on, where Tirdat showed off his skill as an archer. There was a special gladiatorial display. There was a splendid torchlight procession through Rome ... and so on, leading up to the climax, when Nero placed the crown on Tirdat's head. Rome had never seen anything like it.

Thus Nero, like his great grandfather Augustus before him, managed to turn a virtual defeat into a propaganda victory. Money was sent to rebuild Artaxata, which was renamed Neronia. Peace lasted throughout the following reign of Vespasian - leaving him to concentrate on the other major eastern troublespot - Judaea. The Armenian question was off the agenda - for the next 50 years at least. Armenia was firmly established as a Parthian client - and was ruled by a member of the Parthian Arsacid family - normally the next of kin to the Great King of Parthia.

NEXT: AN INTERVAL OF PEACE

Not for the first or last time Parthia and Rome fight over Armenia. The result is very much in Parthia's favour, and brings 50 years of peace of on the western frontier. 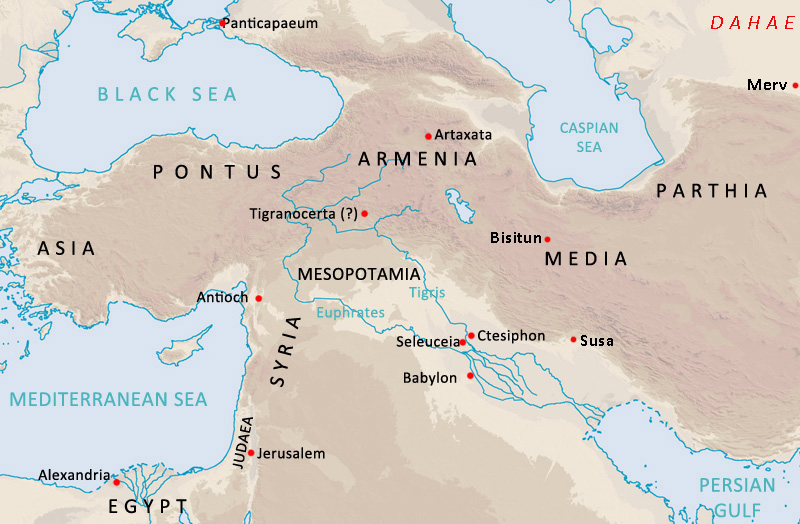 The struggle for Armenia

There are intriguing similarities between Farhad IV and Augustus. Both won power through utter ruthlessness. Both turned to peace rather than war. Both were murdered by their wives*, who wanted to promote their sons (and rule through them). Both had long reigns, making them a hard act to follow.

*Augustus' wife Livia poisoned him according to two ancient historians.

Josephus tells of two orphan brothers, Asinaeus and Anilaeus, victimised by their employer who ran away, armed themselves and eventually attracted a large army of ne'er-do-wells who were able to cock a snook at local Babylonian authorities and the Parthians. Instead of punishing them, Ardavan took their side and allowed their state to flourish. When their power was finally broken, sectarian violence erupted, resulting in wholesale slaughter of the Jewish community. See Josephus, Jewish Antiquities, 18. 310 ff.

The Parthians saw themselves as heirs of the Greeks as well as of the Achaemenids. Compare Mithridates VI of Pontus, who claimed descent from both Alexander and Cyrus.

Like Mehrdad II, Godarz II wanted to link his reign to that of Darius I.

He actually had a Greek courtesan for a mother - perhaps his anti-Greek stance was an attempt to compensate.

His story provided a plot for romances, and a subject for painters (and Radamisto, an opera by Handel). He escaped from Tirdad with his pregnant wife Zenobia. She became exhausted, and begged her husband to kill her so she wouldn't be captured by the Parthians. Rhadamistus obliged. He stabbed her and threw her body into the river. But she survived. Some shepherds found her and brought her to Tirdad, who treated her as a queen.

The second city of Armenia was quick to surrender, after (allegedly) Corbulo catapulted the head of one of its leaders into the middle of a council meeting.

Nero blamed Corbulo, as governor of Syria, for the situation in Judaea. Corbulo was sacked and made to commit suicide by Nero, who replaced him with Vespasian. Vespasian marched on Rome from his base in Judaea to become Nero's successor in AD 69 - leaving his son Titus to complete the suppression of the Jewish revolt. Much more on Judaea here.