Persis (Pars/Fars) was the homeland of the Achaemenid dynasty - the location of major sites such as Persepolis, Pasargadae, Istakhr, and Naqsh-e Rustam. It may seem strange to find it classed as a "neighbour". But for 500 years after the sack of Persepolis (Parsa), it was no longer at the centre, and in fact very much on the margins of the Iranian world. 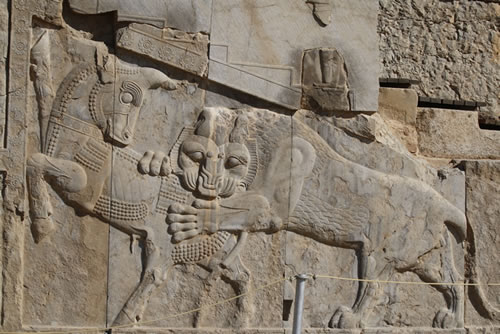 After the last Achaemenid, Darius III, was defeated by Alexander (and subsequently murdered by Bessus, the satrap of Bactria), the satrapy of Persis was allocated to the Macedonian Peucestas. This was a special honour for one of Alexander's most valued officers - the bearer of the sacred shield from Troy, and one credited with saving his life in a battle in India. After Alexander died, he kept his position - and became very popular with the Persian aristocracy because - alone of Alexander's successors - he took the trouble to learn Persian, adopt Persian dress, and fit in with the existing ruling class. He's also remembered for having organised a particularly impressive banquet for his Persian friends. No doubt this had much to do with consolidating his position in the turmoil of the decade after Alexander; he was put in charge of all the eastern satrapies. Later he found himself, reluctantly, having to support Eumenes. At the Battle of Gabiene in 316 BC, his treachery, incompetence, or maybe just arrogance, led to Eumenes' defeat. His was removed from his satrapy by the victor Antigonus, and apparently returned to Macedonia.

Inspired no doubt by the semi-independence enjoyed by Peucestas, local dynasts found that they could rule unopposed by the Macedonian (and later Parthian) overlords, provided they showed support for the regime. We know the names of these rulers, from Baydad (Bagadates I) at the end of 3rd century BC, to Shapur at the start of 3rd century AD: (he was the brother of Ardashir  I, the founder of the Sasanian dynasty). Their names are known from their coinage - and the fact that they issued their own coins over this long period shows how independent they were allowed to be. They were not Achaemenids, and certainly did not call themselves "Great Kings". They continued supporting the Macedonians as long as it was advantageous - then transferred their allegiance to the Parthians. Little is known beyond what can be deduced from the coinage (which was modeled on that of the Parthians) - but it would seem that it was during this half millennium that the memory of the Achaemenids began to fade.

The Sasanian dynasty originated from the ruling family of Persis, and was well aware that it was truly "Persian" after the Arsacid dynasty with its roots in the northeast of the Iranian plateau. It was also aware of the religious basis of kingship - the "farr" of the Sasanians derives ultimately from the special relationship claimed by Darius I and his successors with Ahura Mazda. The priestly class, the Magi, would have tried to preserve the continuity as best they could (without written records, of course, at this period). But it's clear that the Sasanians had no specific knowledge of their Achaemenid predecessors.

Their home base was at Istakhr, a few miles only from Persepolis, and it remained an important religious centre after the Sasanians moved their capital to Ctesiphon.

Although Persis (Pars/Fars) remained a stronghold of Zoroastrianism - there is much evidence (from locally minted copper coins, inscriptions (which refer to 40-60 bishoprics in Pars) and references in Syriac Christian literature) that Christianity also flourished - especially during the "intermezzo" in 6th-8th centuries between the declining power of the later Sasanians, and the full conquest by Islam. 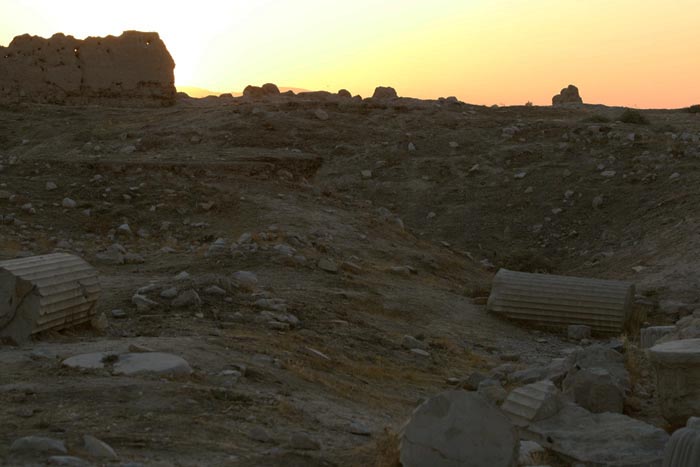 Fading light over the scanty remains of the city of Istakhr, Fars.

The coast and the Persian Gulf

The Achaemenids may not have controlled the coast of the gulf much to the east of Hormuz (Bandar Abbas) in Carmania, or Ras Musandam on the opposite northern tip of Muscat . Evidence comes from Arrian's account which derives from Nearchus' memoirs (Nearchus was Alexander's admiral who sailed along the coast as the force retreated from India). Nearchus' men only recognise "civilisation" once they get past Gedrosia. Herodotus refers to prisoners sent by the king to various islands in the gulf. Other authors mention Carmanian wine, and rich mines.

Ports were established on both sides of the Persian Gulf during the reign of Ardashir I, founder of the Sasanian dynasty. Goods were moved inland to Shiraz and Firuzabad brought by sea from Asia and East Africa (evidence from finds of pottery and coins). Whether there was a Sasanian navy is not known, but evidence points towards increasing trading activity in the gulf. Ammianus Marcellinus, referring to the reign of the first Parthian king, Arsaces I, describes the scene:

All down its coast are towns and villages close together, and continual comings and goings of boats.

By the 6th century, Sasanian monopoly of trade (especially silk) with India and the east led to clashes with the Byzantines. This encouraged the Sasanians to annex territory in South Arabia.

In AD 311, a visitor to Persepolis left an inscription commemorating his visit:

Clearly the royal visitor had no knowledge of the significance of Persepolis, or even its name - to him it was *"The Hundred Columns": simply a rather good spot for a picnic on his way home! Persepolis was also sometimes known to the Sasanians as "The Thousand Columns" or (less impressively) "The Forty Columns". During the Parthian period it had become "The Throne of Jamshid" (Takht-e Jamshid - which it's still known as in Iran today), or the biblical Takht-e Soleiman (Throne of Solomon). Similarly, the great cliff displaying the Achaemenid tombs became Naqsh-e Rustam ("Picture of Rustam"): the association with the Kayanian hero Rustam being because it was thought that a figure (actually Elamite - predating the Achaemenids) was him. Later still, the sites were associated with characters from the Jewish/Muslim traditions: Cyrus' tomb at Pasargadae became "The Tomb of Solomon's Mother", and the tower on the site "Solomon's Prison". The fire-temple at Istakhr became "Solomon's Mosque". 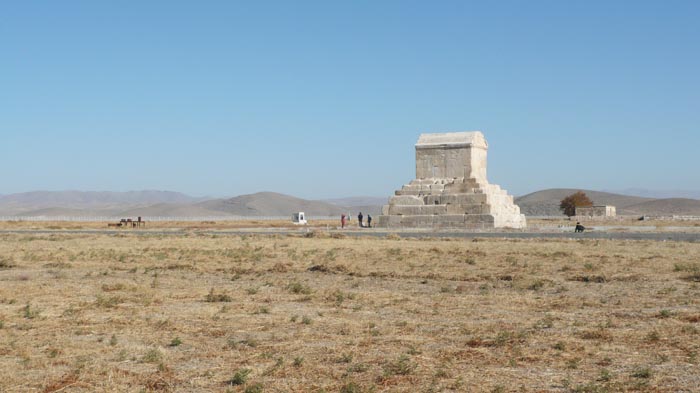 Cyrus I's tomb at Pasargadae, aka The Tomb of Solomon's Mother

Persian Gulf trade under the Sasanians

Local products - such as carpets and pearls - were exported as far as China.

Increased sea trade. Because of the wars with the Roman Empire, the Silk Road, operational since Parthian times, began to carry less trade.

Need for coinage. Coins were minted to support warfare, but, by the sixth century, needs of trade made it necessary to mint large amounts of coins locally - Fars appears to have minted more than elsewhere. Coins from Fars have been found in the ports of southern China and India, confirming long-distant trade along the Asian seaboard.

The Achaemenid heartland became a backwater, ruled by semi-independent "petty kings" for 500 years until the emergence of the Sasanians.

He was a frataraka (Keeper of the fire) - the first Persian appointed governor/satrap of Persia under the Seleucids. He and his successors remained semi-independent until Seleucid influence disappeared after the Battle of Magnesia (190 BC). Subsequently the dynasty was allowed to continue its virtual independence under the Parthians, with the status of sub-kings - until the last of them Ardashir V defeated the Parthian Artabanus (Ardvan) IV, and became Ardashir I, founder of the Sasanian dynasty.

The king of kings was Shapur II. Shapur the king of the Saka was a son of Hurmazd II, and thus a half-brother.