From the 8th century BC the Greeks began founding colonies on the Black Sea coast. Many became thriving cities - such as Sinope (Sinop) and Trapezus (Trebizond, now Trabzon).

Pontus was part of the territory conquered by the Achaemenids, and became part of the satrapy of Cappadocia. When, after Alexander's conquests, his eastern empire fell to the Seleucids, Cappadocia was one of the first areas to break away (around 305 BC). And very soon after that (301 BC), Pontus broke away from Cappadocia, under king Mithridates I ("The Founder"). The story of the foundation of Pontus carries eerie echoes of Darius - power seized by Mithridates with the help of 6 noblemen. He traced his ancestry to Artabazus, one of Darius' colleagues who helped him depose the false Smerdis/Gaumata, and later satrap of Phrygia, so the use of the recycled legend is easily explained! Another ancestor (Ariobarzanes II: executed 362 BC) had been part of the rebellion of the satraps against Artaxerxes II.

The Greek geographer Strabo was a native of Amasia in Pontus - and appears to describe Iranian religious practices still thriving in his lifetime in Pontus as well as in Cappadocia:

The city of Zela contains the temple of Anaitis, whom the Armenians also worship. Sacrifices are performed with more pomp than in other places, and all the people of Pontus take oaths here in affairs of highest concern. Anciently, the kings did not govern Zela as a city, but regarded it as a temple of the Persian gods; the priest was the director of everything relating to its administration. It was inhabited by a multitude of holy slaves, by the priest, who possessed great wealth, and by his numerous attendants; the sacred territory was under the authority of the priest, and it was his own property.

The earlier kings of Pontus were keen to expand - especially to annex the wealthy Greek coastal cities - but their ambitions had to be tempered with acknowledgment of the superior clout of first the Seleucids (Mithridates II married Seleucus's sister, and their daughter married Antiochus III) and then of the Romans. Culturally, Pontus thought of itself as Greek (they used the Greek language), but was proud of its Achaemenid heritage. Both Mithridates IV and Mithridates V worked at staying friends with Rome. Then came Mithridates VI...

For Mithridates VI Eupator, "the poison king", see also here (his rise to power), here (his Armenian exile and eventual defeat) and here (his ultimate fate).

In 120 BC, when Mithridates was 14 or 15, his father was poisoned: he became joint king with his younger brother, Mithridates "the good" - but the power remained in the hands of his mother, Laodice, a Seleucid princess. He appears to have been greatly influenced by two supposed ancestors, Cyrus the Great of Persia (particularly his early life as told by Xenophon), and Alexander of Macedon (who also had a father murdered). Both obstacles to his rule were removed around 115 BC, and as sole king his programme of expansion began. After the conquest of the Crimea and adjacent coastline, he controlled the whole of the Black Sea area: giving access to unlimited manpower and materiel. Militarily, diplomatically and politically he soon had the Romans outgunned - and the rest of Anatolia was his. In Greece he was welcomed as a liberator.

Rome responded vigorously. Sulla defeated his armies in Greece and invaded Asia, forcing Mithridates to surrender his conquests and retire to Pontus. ("First Mithridatic War": 89-85 BC). After an inconclusive series of attacks and counter-attacks ("Second Mithridatic War": c.83-81 BC), Mithridates saw an opportunity for a re-match when his next-door neighbour, Nicomedes of Bithynia, died and left his kingdom to Rome. His attack was a dismal failure - and before long the Roman general Lucullus had pushed him even out of Pontus: he took refuge with Tigranes of Armenia, and made more plans. His return to Pontus was thwarted by the new Roman commander, Cn Pompeius (Pompey). He only had his Crimean outpost left - but now even his son turned against him. His ambitious career ended in ignominious suicide ("Third Mithridatic War": 73-63 BC).

Much legendary material has clung to Mithridates: especially his ability to speak all 22 languages of his subjects, and his interest in poisons and their antidotes. Despite his aspiration to champion Greek civilisation, his own rule seems to have been modelled on Persian precedents. After a victory over the Romans...

...he offered sacrifice to Zeus Stratius [Ahura Mazda] on a lofty pile of wood on a high hill, according to the fashion of his country, which is as follows. First, the kings themselves carry wood to the heap. Then they make a smaller pile encircling the other one, on which they pour milk, honey, wine, oil, and various kinds of incense. A banquet is spread on the ground for those present (as at the sacrifices of the Persian kings at Pasargadae). and then they set fire to the wood. The height of the flame is such that it can be seen at a distance of 1000 stades from the sea, and they say that nobody can come near it for several days on account of the heat. 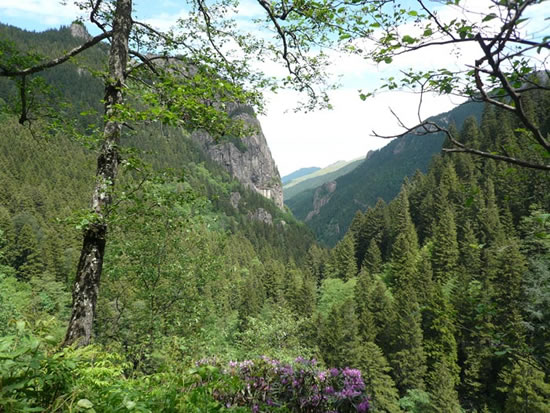 Very distant view of the monastery of Sumela in the Pontic Alps. The rhododendron in the foreground is native to the area. The monastery dates from AD 386: it was founded by two monks from Athens in the reign of emperor Theodosius I. Photo AMW

The Romans made the western part a province, along wth adjacent Bithynia (Pontus et Bithynia). The rest remained a client kingdom until finally annexed by the emperor Nero in AD 62. Pharnaces II, from his base in the Crimea, tried to recover Pontus: Julius Caesar stopped him in his tracks at the Battle of Zela in 47 BC ( "veni, vidi, vici"). Pontus was reorganised by Diocletian and again by Justinian: it became a prosperous area, with Trebizond (Trabzon) a major cultural and Christian centre until finally succumbing to the Ottomans in AD 1461.

Pontus on the Black Sea

Emerged as an independent kingdom with strong Persian connections in the late 4th century BC - but became a expansionist regional power under Mithridates VI. 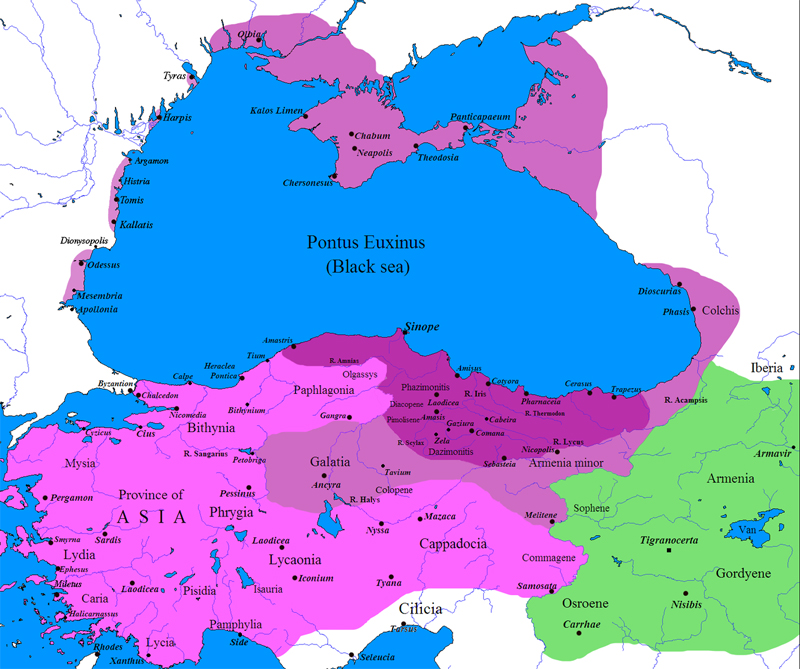 Map showing the expansion of the Kingdom of Pontus under Mithridates VI. The dark purple shows the original kingdom.

The pricipal source for the rise and fall of Mithridates VI (and of the history of his dynasty) is the Roman hisorian Appian of Alexandria, who wrote a massive Roman History around AD 150. He is reluctant to quote his own sources.