Muhammad was recognised by Britain and France immediately - but locally he had to squash opposition from two uncles and two brothers. He soon removed and had strangled the reforming minister who had, as his father before him, advised Fath Ali Shah. He replaced him with Haji Mirza Aghasi, his tutor and spiritual guide, complicit in his predecessor's murder, who mistrusted all foreigners, especially British and Russian - and favoured trying to play them off against each other. As a Sufi, the new minister had an interest in marginalising the clerics (ulama), who under the prevailing flavour of Shi'ism expected to have an influential, if not decisive say in government. He became the de facto ruler during the reign of Muhammad Shah. 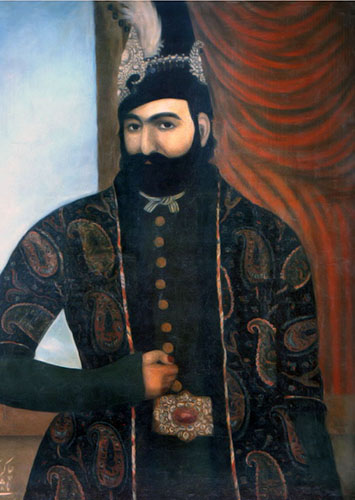 Muhammad was very keen to take Herat - seen as part of ancestral Iranshahr. The British were equally keen to distract him: he ignored them, but when no support was forthcoming from Russia (who had perhaps encouraged the attempt to win back territory in the east, to compensate for the losses in the Caucasus) or the rest of Afghanistan, he had to give up the idea. The British showed their displeasure by seizing Kharg Island in the Gulf, and making him sign a new treaty, giving them the same privileges accorded to the Russians under the Treaty of Turkmanchai in 1828 - and, more importantly, the same trading tariffs (fixed at 5%). The "Great Game" was under way. 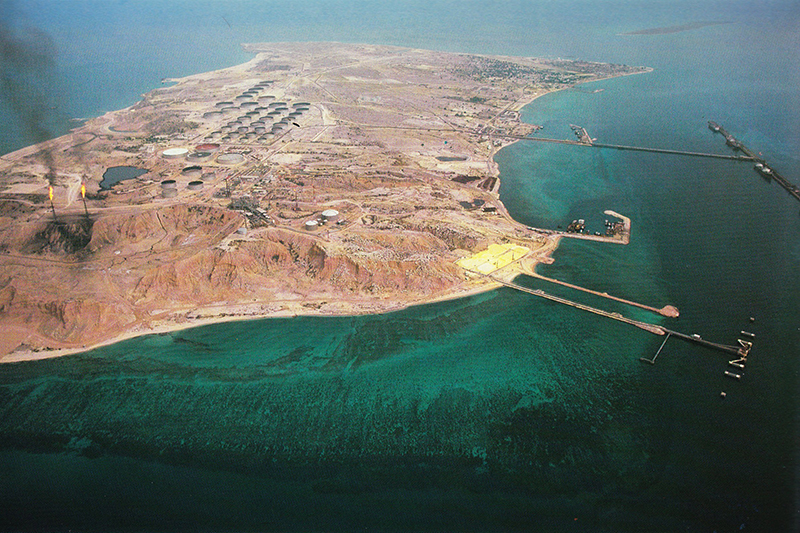 Kharg Island in 1972, before the oil installations were destroyed by Iraq

Sufism: Haji Mirza Aghasi encouraged Muhammad's pro-Sufi tendencies - angering the Shi'i clergy. The Shi'a ulama had always been suspicious of secular authority: they preferred temporal rulers to be submissive to advice and direction from the religious leaders. A Sufi shah listening to a Sufi minister was not good news: this was the beginning of the conviction among the ulama that the rule of the Qajar dynasty was illegitimate - there would be consequences.

Anti-Semitism: At the same time, exploiting the anti-foreigner mood, some extremist mullahs were stirring up ill-feeling against Jews and other minorities - leading in some case to outright persecution, and serious rioting.

Isma'ilis: Banished and disgruntled members of the extended Qajar family caused trouble by encouraging a rebellion in 1838 of the Agha Khan Mahallati, leader of the Isma'ilis, in Yazd and Kirman. The British were also accused of interfering. The rebellion was suppressed, but the Isma'ili leadership moved to Bombay. 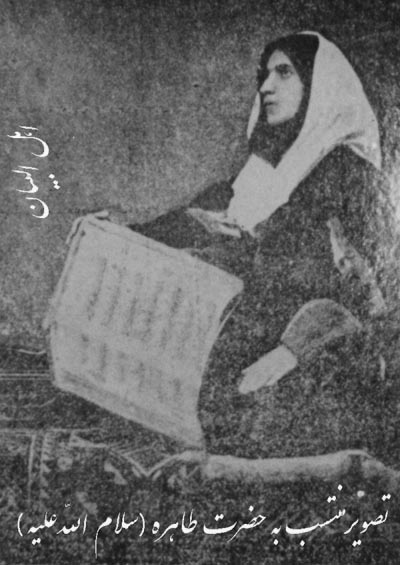 1844 marked the millennium since the occultation of the Twelfth Imam in 844. A pious young Shirazi proclaimed himself the Bab - the portal through which the Twelfth Imam could communicate with the faithful. He began preaching conventional Shi'ism - but became more radical, and eventually began saying he was actually the Twelfth Imam himself. This was serious - putting the Bab and his followers (Babis) in direct conflict with the ulama. When some Babis, acting individually, made an attempt to kill the shah, the government repsonded with collective punishment. The Babis were targeted by the shah's army, and the Bab himself was imprisoned and executed in 1850. Some of his ideas were indeed progressive - equal treatment of women, rights for children, less harsh punishment under Shari'a - and even undoing the Islamic ban on usury. He had many female followers, including the remarkable Qorrat al-Ain [right], who discarded her veil as a sign of emancipation of women and the end of Shari'a law. She was arrested, of course, and executed in secret. Also known as Tahihrih (The Pure One). The Baha'i faith deveoped from the Bab's teaching.

Muhammad and Fath Ali had both been keen to upgrade the Iranian forces, after their defeat by Russia. New units were raised, with European officers and European weapons. These were in addition to the traditional royal bodyguard of ghulams (well-trained cavalry, mostly Georgian slaves, with Qajar officers), tribal levies and community militias. British miltary advisors were allowed to train troops in various cities - in particular young Henry Rawlinson was sent to Kirmanshah in 1835 "as military advisor and assistant" to the shah's brother. Despite such innovations, though, the Iranian army remained on the whole poorly-organised and badly trained - especially when compared with the armies of the Ottomans or Egypt. Partly this was due to the interest of the tribal leaders and the ulama in blocking reform.

As yet, it was only western weapons and military training that the shahs were interested in. That was soon to change, but: "throughout the lifetimes of both Fath Ali Shah and Muhammad Shah, Iran was still, in almost every respect, a medieval Muslim society largely self-sufficient in most of its material needs as well as in its cultural identity."

Earlier, during the reign of Abbas I, the Nuqtavi sect had prophesied that the millennium in 1590 would see the Mahdi arise among the Sufis and end the rule of Islam.

Since the 16th century, there had been two schools of Shi'ism. The Akhbaris believed ordinary Muslims should read the Quran and the Hadith (especially those of the Imams) and make up their own minds: there was no need for learned interpretations (ijtihad). The secular government had authority in all non-religious matters. The Usulis, in contrast, insisted that interpretation was essential - and could only by performed by highly trained scholars (mujtahids). Everything needed ijtihad - their authority extend to matters of law and government. But such mujtahids were often the only shield for ordinary people against an oppressive government.

During the Qajar period, this conflict was resolved. The idea arose that each individual Muslim would have a personal mujtahid - a role model and inspiration to look up to. The mujtahid was an actual living person - who thus (despite Shi'a distrust of authority) became authority. Senior mujtahids acquired status and titles, such as Ayatollah ("Sign of God") and even Grand Ayatollah. Thus, paradoxically, Shi'ism, like Christianity (equally paradoxically!) gained a hierarchy , such as never existed among the Sunni (apart from their recognition of a single caliph, successor to the prophet).

This change added a third ingredient to traditional Shi'a beliefs: 1 - the grief at the martyrdom Husain, revived annually at Ashura, and sympathy for the oppressed; 2 - mistrust of secular authority (it lay with the Hidden Imam); and now 3 - recognition of an inspired hierarchy of clerics.

Additionally, the centre of Shi'i leadership shifted to Ottoman Iraq - the Shi'a shrines at Najaf and Karbala - where they could be independent of Qajar control.

These are the roots of the Islamic revolution - which did not happen until 1979!

There's an interesting footnote to this campaign. An English army officer, Eldred Pottinger, "happened" to be passing Herat on holiday at the precise time it was being attacked by the Iranian army: he offered his services, and with his help the Afghans kept Herat. Pottinger was hailed as a hero, and exemplar of all that's best about the British. 150 years later, it was revealed that he was in fact a British secret agent, dispatched to Afghanistan for this very task. See Craig Murray's blog.

The Bab's writings introduced the idea of a Messiah-like figure, as announced in all the world's major religions. In 1863, Bahaullah, one of the Bab's followers, founder of the Bahai faith claimed publicly to be that figure - he'd had a vision when in prison after the clampdown on the Babis. The Bab's body was smuggled out of Iran and re-interred in Haifa, Palestine. Gradually the Babis transferred their allegiance to him, and became known as Baha'is. Today there are upwards of 7.5 million Baha'is worldwide. In Iran they have been continuously persecuted as apostates from Islam. Bahaullah was banished from Iran by Shah Naser al-Din. Baha'i derives from Baha, meaning glory, splendour, light - something very similar to the khwarenah (farr) of Darius, and the Sasanians. Baha'i believe in the oneness of God, of Religions, and of Humanity: "the world is one country".

[More on the Baha'i Faith]