By 1896, Iran had just 5 kilometers of railway. Why? Had Iran been colonised by Britain, like India, or colonised by Russia, like the khanates of Khiva and Bokhara it would undoubtedly have been crisscrossed with rail links by then - the perfect solution to long-distance communications: how useful would have been a line from Mashhad to Tehran, or one linking the capital with Isfahan, Shiraz and the Gulf coast?

It was Iran's misfortune to be important to both colonial powers - although she remained nominally free and independent, in effect she was controlled by the rivalry between the land empire of Russia and the maritime empire of Britain. For Iran the consequence was remaining backward, poorly educated and unindustrialised - and not just compared with Europe: India and Turkey and many smaller countries all were moving much faster than Iran.

The reason for the lack of railways was the deliberate policy of the two powers: each feared a railway would make it easier to move troops towards their own spheres of influence. Both nations saw Iran as a potential battleground, or as a resource to be exploited. 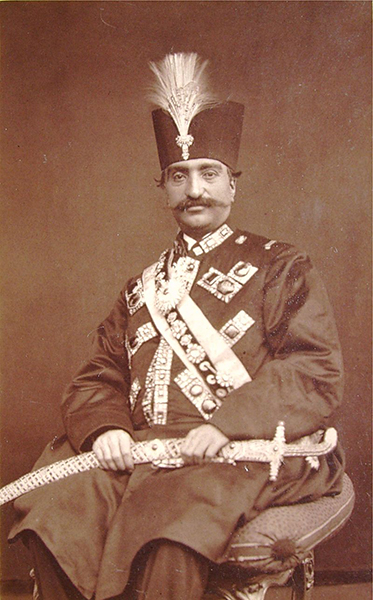 The Shahs of the Qajar dynasty relied considerably on ministers and advisors from outside the family. Frequently these were talented administrators, often from poor or obscure backgrounds. While in favour, they could wield great influence, and win advantage for their families: but as the Shah's servants, they could be sacked on a whim, or even, as happened under Naser's father and grandfather, murdered. The new 17-year old Shah had as his minister Mirza Taqi Khan - now Amir Kabir, who'd been the Iranian representative at the Second Treaty Of Erzerum in 1847 - when relations between the Ottomans and the Qajars had been fixed, with Russian and British supervision. Amir Kabir immediately began a programme of reform - especially of the financial system, the army - and most significantly - education. In foreign policy he was for diplomatically keeping a balance between Russian and British influence, at the same same beginning to look outwards, opening legations in London, St Petersburg and Istanbul, with consulates in Bombay and Tblisi. But in 1852 he fell, - due to family intrigues (the Queen mother played a significant part) and possible Russian and British connivance. The Russians disliked him because he was pro-British; the British because he was pro-Russian. Neither power needed a modernised Iran. He was sacked, exiled, and and forced to take his own life . Thus ended any possibility of Iran modernising - yet.

"Along with Mossaddeq he inhabits a pantheon of tragic hero statesmen whose popularity ... reflects less the reality of their achievements ... and more the hopes and aspirations of the people."

Naser al-Din dismissed his next prime minister after a few years, and thereafter decided to do without one. But after ten years, he appointed Mirza Hosein Khan, who'd served abroad as a diplomat, and was impressed by the progress he'd seen in the Ottoman empire. In order to convince the shah of the need for change he encouraged him to travel and see for himself.

"The most compete and extraordinary surrender of the entire industrial resources of a kingdom into foreign hands that has ever been dreamed of, much less accomplished."

In 1872 Mirza Hosein Khan persuaded the shah to accept a proposal for a major development plan in Iran. It included a railway-line from the Caspian to the Gulf, mining rights, industrial improvements, irrigation, telecommunications and other ideas which would have brought much economic benefit. The proposer was the Baron Julius de Reuter, a British Jew of German extraction, the founder of Reuters news agency. The shah personally received a sweetener of £40,000. The plan was unpopular - foreign interests were already being blamed for food shortages (severe famines in 1870 and 1871), by switching agricultural priorities from food to cash crops such as cotton and opium. The shah, returning from a European trip, bowed to pressure (neither Britain nor Russia were in favour for selfish/strategic reasons) , sacked his minister, cancelled the Reuter project - but kept his £40,000. De Reuter was allowed to set up the British Imperial Bank of Persia (originally Persian Bank Mining Rights Corporation) as a compensation - with rights to print paper money, but not until 1889, when he also secured limited rights to drill for oil - with no success. The Russians also set up a bank: it was government-supported and thus free to do business to Russian advantage without having to turn a profit.

Russia helped set up the Iranian Cossack Brigade - officered by Russians, it became an elite force loyal directly to the shah, and a conduit for Russian influence. Meanwhile, Naser al-Din's misguided attempt to annex Herat ended in humiliation and alienated Britain. He not only lost territory but also lost an opportunity to become a partner in the defence of India. Iran's delegation in London talks was headed by the remarkable Malkom Khan. But the shah nixed the deal, probably due to Russian "advice". So Russia scored, while Britain reverted to its cynical policy of exploitation rather than cooperation.

The Reuter concession failed, but the success of the Cossack Brigade led to a rush of foreign (British, Russian and French) attempts to buy concessions in Iran in return for military or financial help. Reuter's Imperial Bank concession was among those negotiated at this time (1888). They did not make the shah more popular - but his new Prime Minister since the sacking of Mirza Hosein had no interest in reform, merely in keeping the shah happy, and consolidating his own power. A powerful opposition voice was Sayyid Jamal al-Din al-Afghani (1839 - 1897). He hated European (especially British) imperialism, and was an advocate of Islamic unity. 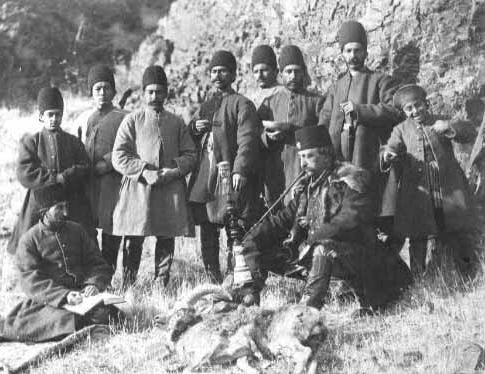 Naser al-Din Qajar enjoying a smoke with a qalyan (hookah)

This was where all the forces opposed to the shah came together. The British Minister to Iran, Sir Henry Drummond Wolff, sent to strengthen the British position, and who'd helped set up the Imperial Bank, negotiated a concession, on behalf of his friend Major Gerald Talbot, giving him a monopoly on everything to do with tobacco - growing, preparing, buying, selling, exporting - for 50 years, paying £15,000 per annum plus 25% of the profits. A good deal for the shah - but everyone else was furious. The Russians (because it covered the whole of Iran - including their sphere), the tobacco merchants, growers - and smokers (because the price would go up), the ulama (because there'd be more foreigners, and more materialism), ordinary bazaar traders (because they were excluded from this lucrative trade) and the intellectuals abroad like Malkom Khan and Jamal al-Din. Opposition was coordinated via the mullahs, and the new telegraph. Influenced by Jamal al-Din, a very senior Shi'a mujtahid in Najaf (Iraq) issued a fatwa banning tobacco use in Iran (1891). It had immediate effect, and "almost everyone stopped smoking" (even the shah's wives and non-Muslims).

In 1892, the shah cancelled the entire concession - but had to take out a ruinous loan (from the Imperial Bank, ironically) to pay the compensation. He couldn't afford to pay interest on this loan - the Russian bank quickly stepped in. The Iranian government would get 10% of its profits. A scheme to promote British interests ended up helping the Russians.

After the tobacco fiasco, Russian influence began to predominate, and Naser al-Din's last years were marked by rampant corruption and repression of any kind of reform - no more European contacts, newspapers published abroad, education ...

In April 1896, he was shot dead at the shrine of Abd al-Azim a few miles outside Tehran. The culprit was a devoted servant of Jamal al-Din, whom he'd recently visited in Istanbul - and was widely believed to have suggested the murder of the shah to him. The news of his death was concealed to give the Cossacks time to suppress any unrest in Tehran.

Naser al-Din had resisted change - but there had occurred several useful innovations during his reign: a police force in Tehran, street cleaning and lighting, the telegraph, newspapers, improvements in banking and insurance, newspapers and postage stamps. But these fell very far short of the rate of progress in Turkey or Egypt.

This little narrow-gauge line was built by the Belgians from Tehran to the shrine of Shah Abd al-Azim: later the scene of dramatic events.

Britain and Russia faced each other directly in the Crimean War (1854-1856) during the reign of Naser al-Din.

Though of humble origins, he'd been educated in Paris - and been a diplomat in Bombay, Tblisi and - most importantly - Istanbul.

Britain could have done with Iran as an ally in Afghanistan - she was worried about recent Russian expansion into Central Asia (Khiva won in 1873).

Named by his father after Sir John Malcolm, the British diplomat, historian and friend of Iran, he was a Paris educated intellectual, yet another of those who fell from favour because of his ideas of reform and modernisation. He'd got to persuade the shah to set up a lottery - until conservatives pointed out that the Quran forbade gambling. In exile in London, to undermine the government in Iran, he started a newspaper which advocated ending arbitrary rule by the shah, and establishing a constitution and the rule of law.

He claimed to be Afghan by birth (probably to reassure a Sunni audience), but was brought up on Shi'ism and studied Iranian philosophers such as Ibn Sina (Avicenna). His travels took him to India, Egypt, Paris and London, where he promulgated his anti-imperialist and pan-Islamic views, before turning to Iran, where he built up a following - who he persuaded that religious and secular opposition to the shah needed to combine. He won considerable support from wealthy merchants and the ulama. After a brief exile in Russia, he was finally deported to Iraq - and from there he went to London from where he continued to issue inflammatory anti-government writings. After the successful demolition of the tobacco concession, he was invited to Istanbul by the Sultan/Caliph Abdulhamid, to help promote pan-Islamism.

See here. Shortly after the accession of the new shah, there had been a spate of Babi inspired revolts in various cities, They were brutally suppressed and Bab himself was rounded up and executed in 1850. But Babism lived on - there was an assassination attempt on the shah in 1852 which led to more repression. Qorrat al-Ain was killed, But still the movement grew - despite opposition from secular and religious authorities. In the 1860s it acquired a new leader, and evolved eventually into the Baha'i faith - still persecuted in Iran.