and Iran, the world's first superpower

ISLAMIC REPUBLIC OF IRAN (since 1979)

The revolution was orchestrated by the Grand Ayatollah Ruhollah Khomeini, but supported by the whole of Iranian society, except the Shah's own upper-class circle. It required no leadership from the army or communists (though the Shah blamed them anyway, and crushed them). It was entirely home-grown. The Americans, despite the Shah's worries over a new Democratic president (Jimmy Carter), continued to support the regime, completely misreading the current political climate, probably because of intelligence failures. The Russians, who also saw the Shah as a stabilising force (even if pro-American) didn't take the leadership of a Shi'i cleric seriously. They too reduced their intelligence operations, and so underestimated the popularity of the revolutionary movement.

A referendum of all citizens over 16 confirmed the creation of the Islamic Republic of Iran (IRI) in April 1979, three months after the Shah's departure. 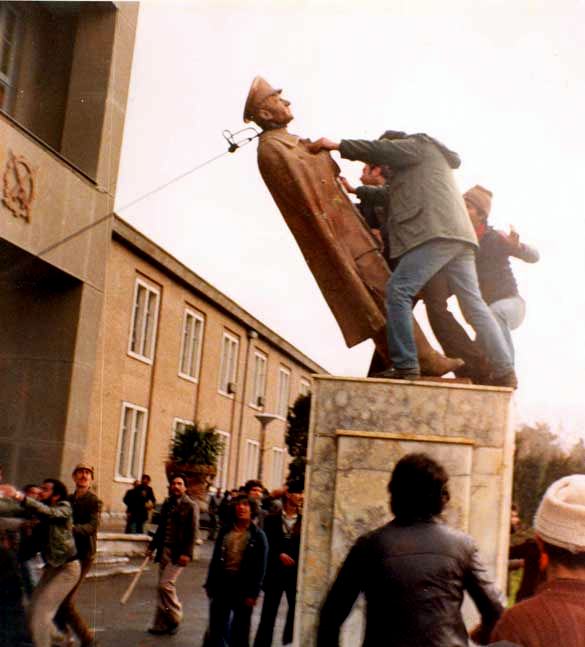 All leaders of the Islamic revolution agreed on the Shah's "neither east nor west" - but disagreed profoundly on what it meant. To begin with, the Provisional Government (PGOI) was in the hands of the "liberals" (Premier Bazargan and President Bani Sadr and colleagues) who wanted a west-leaning foreign policy (to protect against Soviet ambitions), a reformed economy, but one continuing past policies, a leadership drawn from the western-educated elite presiding over some parliamentary structure, and a mild enforcement of Islamic ethics and morality. No actual role for the Shi'a clerics!

The Shi'a ulama differed widely amongst themselves: the moderates were originally calling the shots (Ayatollahs Taleqani and Shariatmadari, and Iraq-based Abol-Qasem Khoei opposed Khomeini); there were also those who favoured another Shi'a tradition of avoiding politics completely. But Khomeini's ideas on Islamic government, thanks to the fanatical enthusiasm of his followers (originally only a few, and mostly his ex-students), won out, and many of Iran's clerics were compelled to follow the Khomeini line.

In 1981, Grand Ayatollah Khomeini and his fellow ayatollahs- Beheshti, Montazeri, Rafsanjani and Khamenei ousted the liberals. They were able to exploit two major events (more below) - the Hostages Crisis, and Saddam Hussein's invasion of Iran. They now took control of the state apparatus of the old regime - the ministries, the police, the armed forces, and the new ones: the Revolutionary Council and the Islamic Revolutionary Guards.

Between 1979 and 1981 there were still a range of opposition groups to contend with as well as the internal opposition from the Islamic liberals. Freedom of thought and discussion (quite open at first) was increasingly restricted. Dissenting newspapers came under pressure, with their offices targeted by Khomeini's followers. The major issue was the new constitution proposed by Khomeini: a theocratic republic dominated by Shi'a clergy - where the role of an Opposition (if any) lay was far from clear.

An ingenious and complex interaction between religion, autocracy and democracy; a clever system of checks and balances, but where the religious leader always has the final say. It was devised by a group of Khomeini supporters during the summer of 1979, and adopted in December while the republic was distracted by the excitement of the hostage crisis.

Shiism had long favoured the rationalist theology of mu‘tazilism, rejected outright by orthodox Sunni legal traditions and loathed by Islamic “fundamentalists” - including not just the jihadis but also the Saudi Wahhabis. Mu'tazilism emphasised individual responsibility alongside the idea that God is obligated to reward the good. In this way Shiism, along with the institutional power of the clergy, enabled the Revolution to harness the power of the state, and attempt at least to reconcile the worlds of religion and politics. The relative stabilty of Iran, compared with other nations in the middle east today (2021) with predominantly Muslim populations, demonstrates that the Mu'tazilite tradition, with its ancient roots in Muslim philosophy showed the right way to go, even if subsequent issues have brought severe challenges.

Ultimate power is in the hands of the Supreme Leader (then Khomeini) who is appointed for life by a Council of 88 Experts, who are elected by the People for an eight year term. Only they can (in theory) remove the Supreme Leader. The Supreme Leader is a also the Commander-in-Chief of all forces, and has direct control of the Revolutionary Guards ( then 120,000 strong and already the most powerful organisation in Iran).

The people elect a President (for four years) and a Parliament (Majlis, for four years) with 290 members, who introduce and make laws. The Supreme Leader has the power to remove the President, and the Guardians can veto legislation.

During the past 50 years under the Pahlavis, the position of women in Iranian society had been gradually improving - in education, employment, and in their legal rights within the family - inheritance, marriage, divorce. In a gesture of modernisation, the veil had been banned in 1936 - and state enforcers had been empowered to remove the offending items up until 1941. Women increasingly were by now voluntarily abandoning it. The new Islamic regime, however, began a policy of reversing these gains under the pretext of enforcing sharia law. Gradually the veil became compulsory once again.

Two crises, indirectly inspired by Khomeini, ultimately completed the consolidation of the 1979 revolution. 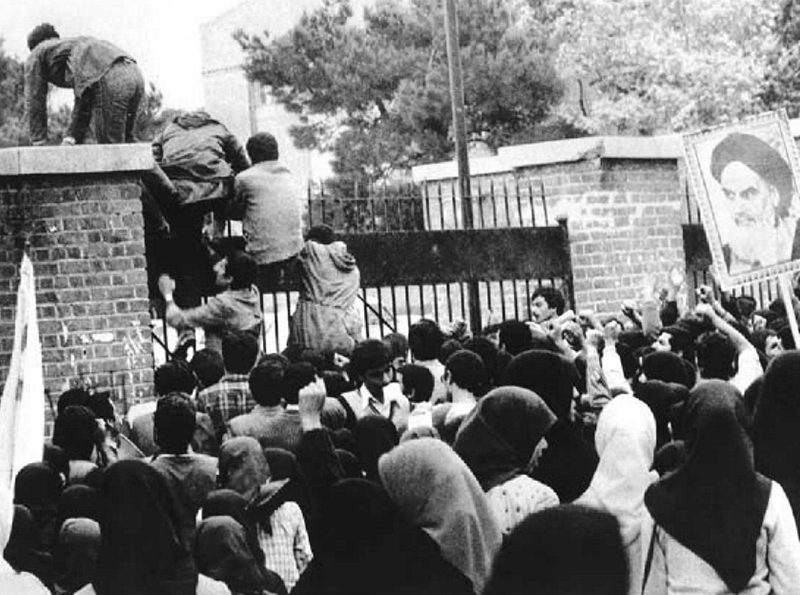 For many young Iranians the overthrow of the Shah was linked with deep distrust of America: The CIA had orchestrated the downfall of Mossadeq in 1953; the Americans had kept the Shah in power; President Carter had allowed the Shah to take refuge in the USA; the Americans were plotting to restore him as they had in 1953. The Americans in 1979, mindful of Vietnam, genuinely did not want to take sides and get involved - but events soon gave them no choice.

On 4th November 1979, a group of students, calling themselves "the Line of Khomeini" invaded the US embassy in Tehran and took its staff of 52 diplomats hostage. The incident, originally assumed to be a trivial matter - a similar attempt in February had been settled with a few phone-calls - lasted for an unimagined 444 days. The conspicuous failure of President Carter's helicopter rescue attempt was a boost to Khomeini's popularity. The huge world-wide publicity, and consequent diplomatic isolation of Iran united the revolution around him, personifying brave confrontation of "the Great Satan" - the opposition was powerless to prevent the new theocratic constitution being adopted.

The crisis was not resolved until January 1981, when the new Republican President Reagan was able to claim the credit. Carter's failure to win a second term was celebrated in Iran as the result of the hostage affair. But the relationship between Iran and the US - which had become almost friendly under the latter years of the Shah - was ruined, apparently for ever. Meanwhile there was worse:

Iraq also got a new leader in 1979. Saddam Hussein had played an important role in the Ba'athist coup of 1968, and was already de facto ruler: he became President in this year. His political philosophy blended Arab nationalism (he conveniently enlisted the Babylonians and Assyrians of ancient Mesopotamia as their ancestors) with socialism (nationalising oil and banks) backed by straight-up militarism. He may have genuinely feared Iranian imperial pretensions (there was a long history to draw parallels from!), but his policy was definitely one of "retaliate first". He'd long wanted to round off a greater Mesopotamia by annexing oil-rich Khuzestan, geographically so obviously part of Iraq, not Iran. He calculated that Iran had few friends now thanks to the hostage crisis, and internal dissensions. And he just wanted to take Iran - so proud of its Islamic revolution - down a peg or two. He didn't need US encouragement, nor did he have it: though later the US gave backing and blessing to Saddam.

Saudi Arabia, December 1979. A group of insurgents (maybe as many as 500) infiltrated the Grand Mosque in Mecca (where 50,000 worshippers had gathered), produced weapons from their robes and seized the Mosque. They accused the ruling al-Saud dynasty of corruption, and destroying Arabian culture by "aggressive westernisation". Some hostages were released, but attempts by the Saudi armed forces to retake control were futile, and there were many casualties. After two weeks, French (having been swiftly coverted to Islam) and Pakistani commandoes assisting the Saudi army devised a plan involving pumping gas, and dropping grenades into the basements where the rebels and hostages were. After two weeks, the rebels surrendered: hundreds on both sides had been killed, and hundreds more injured.

Ayatollah Khomeini cashed in, blaming US imperialism and international Zionism - a signal for widespread anti-American demonstrations all over the Islamic world. The rebels were publicly beheaded - but the reaction of King Khaled was to appease religious extremism, rather than attempt to counter it. The Saudi ulama were given more power to enforce repressive Wahhabism: no images of women in newspapers or on TV; cinemas and record shops closed; more religious study in schools; only Islamic history taught; rigid gender segregation; religious police given more power. The rebels effectively achieved their objective, and Khomeini's bid to pose as an authority over all Islam was undermined. Saudi Arabia's even more firmly entrenched Wahhabism set itself to oppose and defeat Iranian Shi'ism and its influence. 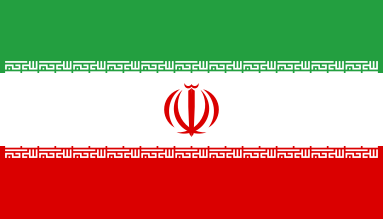 The new flag of the IR adopted in 1980, replacing the "lion and sun" motif used since the Safavids which recalled Persepolis and the Achaemenids.

Had been cut right down, due to the confidence in a strong and stable shah, whom they did not want to offend. Hence the US had little up-to-date knowledge about the situation and its main actors.

Not a very good way to render the Iranian term Velayat-e Faqih. Velayat means regency or deputising (for the Hidden Imam who is the supreme authority); faqih means a jurist, an expert in Islamic law. So Velayat-e Faqih means "Regency of the Jurist".

Founded in 1979 by Khomeini as an armed paramilitary force to protect the new republic. A signal that Khomeini intended to stay in control!

Within days of the revolution, the Family Protection Act was annulled, restoring men's control over wives and children. Khomeini was dissuaded from making Islamic dress (hijab) compulsory - but he achieved the same objective indirectly, by enforcing segregation in schools, sporting fixtures, pools, beaches, private parties: women were free to remove their hijad only in segregated places. It was sold to the Iranian public as a "national tradition" which had been undermined by the detested Shah. Later, during the Iran/Iraq war, hijab-wearing became almost a patriotic duty, a proof of loyalty to the nation.

Ironically most of them were experienced individuals sympathetic to the needs of the Iranian people who'd actually volunteered to oversee the transition. The tragedy was that the crisis was hijacked to provide the arrogant new republic with a worthy enemy. The siege marks the start of an American obsession with Iran, which is still (2021) a major factor in US foreign policy.

Iraq's role in the hostage crisis.

Members of an Arab Liberation Front in Iran's Khuzestan province (which they called Arabistan) had been recruited by Iraqi intelligence to orchestrate the hostage crisis, in order to provide Saddam Hussein with a pretext for invasion.

They were possibly inspired by the success of the Iranian revolution, and held similar notions of Islamic purity. However, they connected themselves to Ikhwan - the Islamised Bedouin warriors crushed by Ibn Saud in 1929. Their leader al-Otaybi was the son of a famous Ikhwan leader in the 1920s.